Red-Hot Domino's and the Road to 30,000 Restaurants

The pizza chain has major growth ahead, and sizzling sales to match.
Pizza | October 2018 | Danny Klein

Domino’s CEO Ritch Allison made a comment and then repeated it. It was simply the kind of performance indicator that needed to be heard twice. “Year-to-date in 2018, we have only closed just seven stores in the U.S.,” said Allison, who took over for longtime leader J. Patrick Doyle this past summer, “while opening 140. I credit the many efforts related to sales and efficiencies made by our team and our franchisee-base toward the industry-leading unit economics that are keeping stores open and profitable.”

Closing less than 10 stores in a 5,751-unit domestic footprint over that timespan is nothing short of astounding. And it speaks to a stellar long-term outlook that sees Domino’s gobbling up market share in one of quick-service’s prime segments.

The short-term results, however, were a bit mixed, but really only when measured against Domino’s own sizzling standard in recent quarters. It posted domestic same-store sales growth of 6.3 percent in the third quarter, marking the 30th consecutive quarter of positive comps growth. Internationally, same-store sales lifted 3.3 percent, making it a ridiculous 99 straight quarters of positive gains.

The U.S. growth, though, represented the second straight quarter of decelerating gains. It was 7 percent last quarter and 8 percent to start the fiscal calendar. Revenue of $785.97 million, up from last year’s $643.64 million Q3 figure, missed Wall Street’s estimate of $788.08 million. Earnings per share came in at $1.95 and net income $84.10 million.

Returning to Domino’s footprint, the chain accelerated growth with 232 new locations compared to 113 in the prior quarter. It has added 920 delivery and takeout hubs over the past year to bring its store count to over 15,300.

Over the course of this time, Domino’s share has blossomed, too. In 2017, the company said it had 17 percent of the total quick-service pizza market share. Other major pizza chains accounted for 31 percent, and regional chains and independents made up 52 percent. In regards to pizza delivery market share, Domino’s held 29.3 percent. Major brands had 28 percent and regional chains/independents accounted for 43 percent.

Domino’s currently delivery dollar share is the highest it’s been in that span.

And there’s room to grow. “One of the great things about this segment of the [quick-service restaurant] industry is that, we as the market leader, still only sell about one in six pizzas that are sold in the U.S. and only about one in 15 that are sold outside the U.S. So I think there is significant headroom for market share growth,” Allison said. 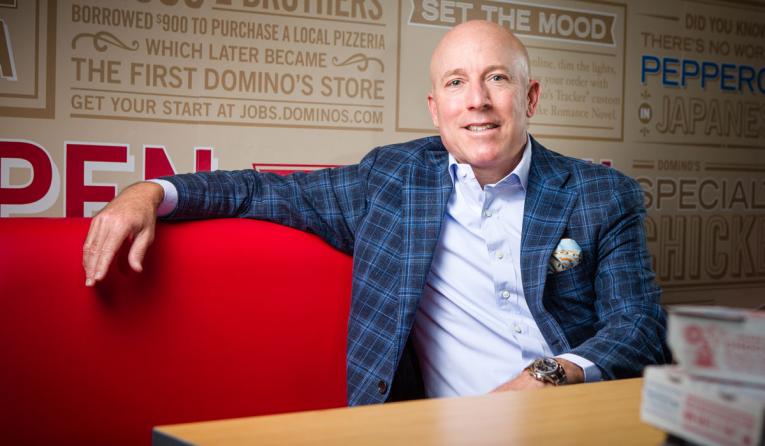 “When we take a look at the category overall, we're really more focused on our own competitive strategy than we are on kind of the short-term ups and downs with any specific competitor. And we think if we can continue to stay focused on bringing value to our customers and also on delivering terrific unit-level economics to our franchisees, we think we can continue to be successful and can continue to take share from competitors, small and large, in the pizza market.” — Ritch Allison, Domino's CEO.

And speaking of Papa John’s, Allison was asked if troubles faced by the company stemming from its battle with founder John Schnatter, helped Domino’s grab more share? The short answer was: not really.

“We're in a very fragmented category and if we have a competitor donating share, it doesn't simply fall in our pocket, we've got to earn it,” Allison said, without naming Papa John’s specifically. “And sometimes, share that's donated doesn't necessarily all fall into the pizza category as well and that specific competitor has a relatively small share within the category. So the impact of this on the overall landscape isn't necessarily as heavy as some might assume.”

“When we take a look at the category overall, we're really more focused on our own competitive strategy than we are on kind of the short-term ups and downs with any specific competitor,” Allison continued. “And we think if we can continue to stay focused on bringing value to our customers and also on delivering terrific unit-level economics to our franchisees, we think we can continue to be successful and can continue to take share from competitors, small and large, in the pizza market.”

Domino’s has a 10-year goal of hitting 8,000 U.S. stores. Globally, it believes there’s potential for an additional 5,300 restaurants in the top 15 markets alone.

Here’s how that growth opportunity unfolds with current stores next to Domino’s projected potential, as shared by the company:

So if you add that up with the U.S. projection, Domino’s forecasts potential for 15,049 additional restaurants, amounting to a 30,000-plus-location restaurant company.

That’s a pretty staggering figure. Domino’s has put a 6–8 percent unit growth outlook over a three- to five-year window.

Also, not on that list? China and Russia. Allison said Domino’s is optimistic about the forward growth in some of those emerging markets as well.

The brand’s focus on digital (more than 60 percent of U.S. sales come via digital channels, a rise from zero percent in roughly a decade) and small footprints of delivery hubs make the growth a very realistic target.

Allison said Domino’s expansion has also been buoyed by a “fortressing” strategy. This is essentially a path known as “position defense strategy,” where a company builds a fortress around its company to protect from competition.

Domino’s is also just really busy, and profitability is inspiring new stores from the current base.

Allison said, on Friday and Saturday nights, “we've got some stores where we have a tough time putting an incremental pizza in the oven because they're so busy. Take all of that and you roll in a historically low rate of closures in the business and it's driven a nice acceleration and we're very optimistic about U.S. store growth going forward.”

He added that the stellar business is helping Domino’s labor environment with drivers specifically. “When we take a look at what a driver can make at a Domino's Pizza relative to delivering or driving for some other businesses, it's very, very attractive,” Allison said.

On the topic of aggregators and the pressure third-party delivery might be putting on companies like Domino’s, Allison said Domino’s is “going to grow regardless.”

“It's more about what we're doing, our strategies, our great execution in more than 90 markets around the world, and we're—as you see again we're hitting more often than not in that 8 to 12 percent global retail sales growth with really good flow through to the bottom line,” Allison said.

Part of the “proven playbook” leveraging this growth at Domino’s includes: “customer insights, franchisee alignment, technology innovation, and a clear focus on value and transaction growth as the main drivers of top line results. We are a work-in-progress brand and we will never rest in our quest to achieve a dominant number one position in every market where we compete,” Allison said.

Allison unpacked some of Domino’s recent innovations. To start, its Hotspots program, first announced in April, which allows guests to order pizza to central locations without the need for a home address, like a park or sporting event, has expanded to more than 200,000 locations across the U.S. “Beyond any sales expectations at this early stage, the thing I'm most pleased with has been the incredible engagement from this program, with our customers, our franchisees and the media. Hotspots received much attention because it is a program that is completely unique within our industry,” Allison said.

Behind the curtain, Domino’s recent incorporated voice and mobile capabilities into some of its store-level activities, Allison added, including inventory management.

Allison went on to credit Domino’s consistency in the value realm as a key driver. The $5.99 mix and match deal has been around about nine years. In carry-out, the $7.99 offer is also a staple.

“And the key with value is consistency because it's really hard to offer those price points in the marketplace if you're not driving volume growth overtime,” he said. “And you can't just jump on value for a quarter or for one promotional window and jump back out. That's just not a recipe to driving long-term transaction count gains in the business. And everything that we have experienced here at Domino's in the U.S. and in our other large international markets is that it is that transaction count growth over time that correlates not only with sales growth but with profit growth.”

“And staying consistent and focused on that value has helped us to drive the kinds of unit level profitability numbers that you've seen from us over time,” he added.

Domino’s flexibility by location helps define the strategy, too.

“Franchisees also have levers at their fingertips as well with local menu pricing, with how they price their delivery charges et cetera that allow them outside of the national price point to manage pricing and some of the profit dynamics in their business at a local level as well, and we think that mix of a strong consistent national price point with flexibility at the local franchisee level is the recipe for a profitable and growing business,” Allison said.