Why Pizza Hut Could Strike it Big with Beer Delivery

Are customers ready for the service?
Pizza | January 2019 | Danny Klein

Can Pizza Hut make pizza and beer work in harmony?

Beer and pizza. It might be one of the most obvious food pairings on the planet. Yet this has been, historically, a logistical nightmare for quick-service chains that live in the delivery space. How do you check IDs? What guidelines can franchisors install to help multi-unit operators navigate laws that vary by state lines? The concerns go on.

Back in May 2018, Pizza Hut expanded a beer delivery pilot to nearly 100 stores across Arizona and California. Then, just a couple of weeks ago, the YUM! Brands chain said it was on track to hit 1,000 restaurants by summer 2019. Pizza Hut is uniquely positioned to capitalize on the service since many of its locations already offer beer and wine and are licensed to serve and distribute. In 2016, Pizza Hut debuted several redesigned restaurants in Texas. These units, highlighted by wraparound windows, outdoor seating, and drive thrus, were also equipped to serve beer and wine. And that was just the start of a remodel program that targets roughly 700 U.S. stores per year through 2022.

While it seems like an obvious fit, are customers eager to see it? Alpha, an on-demand user insights platform, conducted a test using its on-demand service. It presented 350 beer drinkers 21-years-old and older with fixed and open-ended questions.

Here’s what the data showed:

What was your first reaction to this service?

As you can see below, customers appear more than ready for it. 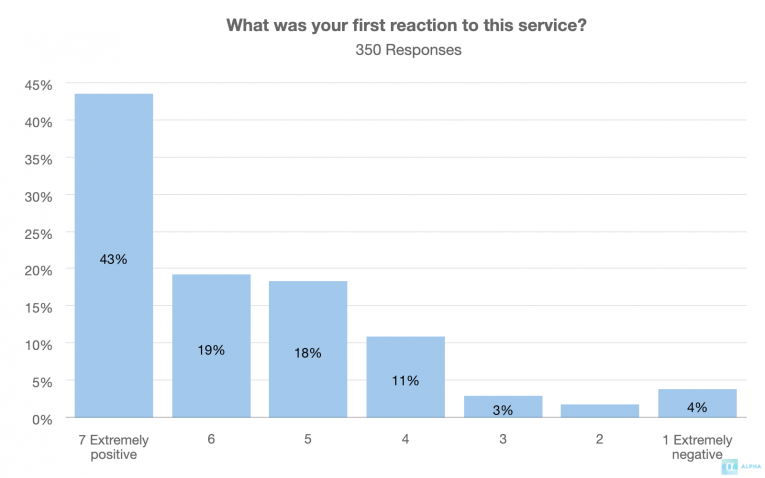 Let’s break it down even further. 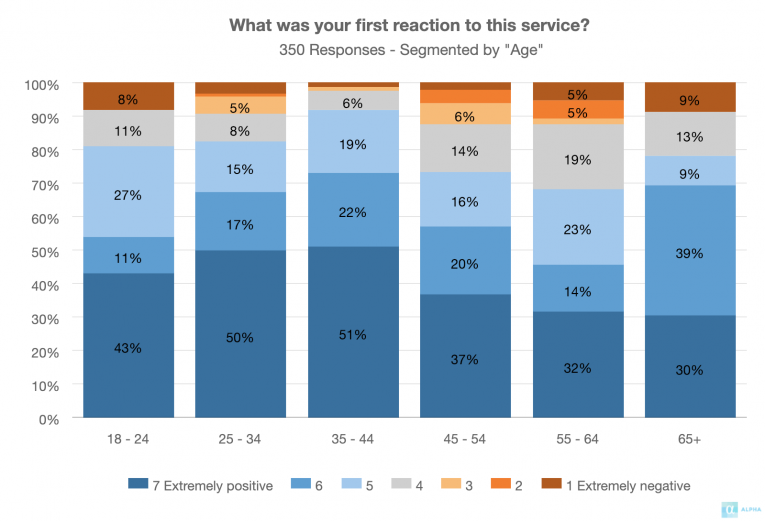 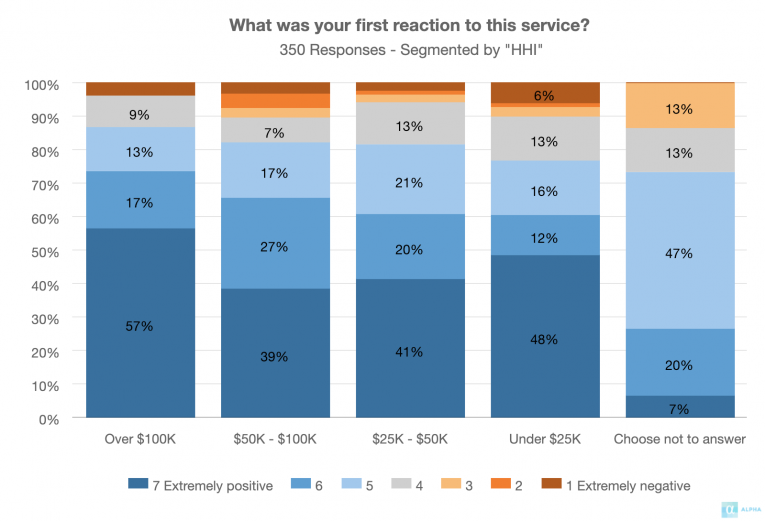 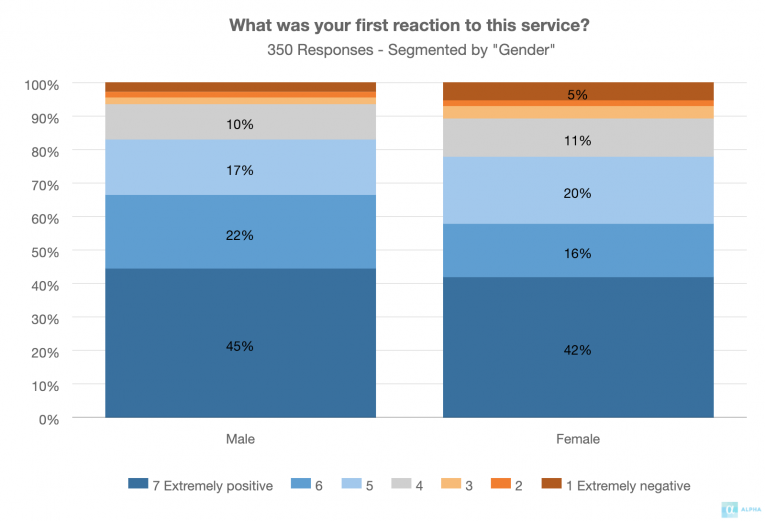 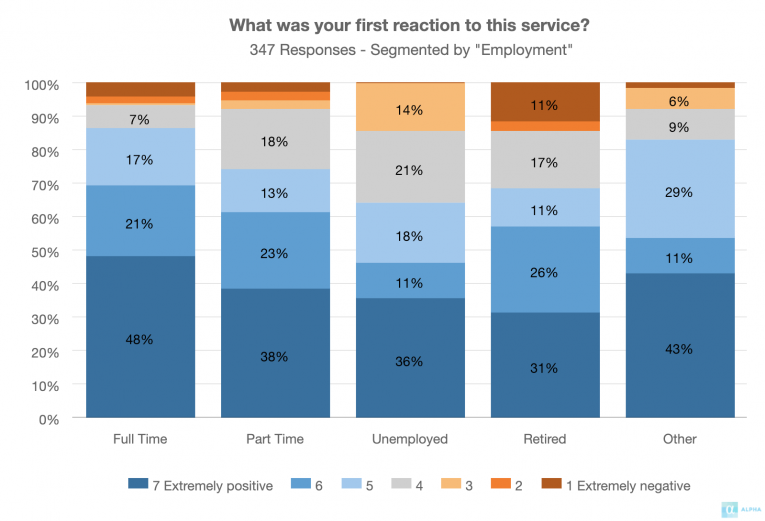 Some takeaways. Looks to be a hit with the younger crowd, peaking at the 25–44 range. That makes sense given the delivery propensity of the age group. Not to mention the fact older generations might be a little less eager to load up their diet with pizza and beer. Or maybe not. Perhaps they just don’t want to admit it. Older customers also might not be open to the novelty as much and consider getting beer sent to their house too radical. Younger consumers tend to chase convenience like it’s a magical carrot, no matter the arrangement. That goal is not as prevalent for Baby Boomers who are still frequent drive-thru and carryout consumers.

Alpha also asked users what their first reaction to this service was. Here are a few highlights from both ends of the spectrum. First on the “extremely positive” response. The word “convenient” was used 28 times, by the way.

“Pizza and Beer for game time, what could possibly be better than this? I love this concept because I can then order pizza and beer and not have to run out for anything at all, as both of the things I want for the games will be brought to me and save me energy, effort, and time.”

“Pizza and beer are a natural combo, and if it can be done legally, I'm all for getting a beer delivered with my pizza.”

“I think it would be a great idea for beer drinkers for the sole purpose they wouldn't have to drink and drive to get more.”

Now on the “extremely negative” side.

“I prefer to drink other beverages while eating pizza. Beer is not something I think would go well with pizza.” (Who is this person?)

“If you do not have beer at home you can pick up a six pack at a convenience store on your way to pick up a pizza. If you are having it delivered it would be good if you were on vacation and had no transportation.” (I’m not sure what this is trying to say, honestly).

Here are some other negative responses from the one-step-above ranking.

“There will be those that are not 21 trying to buy beer, the driver will be responsible for carding the one who placed the order, most drivers are not 21 yet and may keep the beer for themselves if customer can not prove they are of age. It just is not reasonable to do such a service, nor does it sound like a well-thought out plan.” (This presents some real issues. Pizza Hut will need to make sure its age-check process is iron clad).

Another similar take: “The risk of providing beer to minors is too great to offset the advantage to a few customers. The range of beers available would be limited and would not contribute to the value of the delivery.”

This challenge is valid and probably why many brands have shied from it. On the latter point, some of the current six pack offerings include Bud Light, Shock Top, and Budweiser.

Let’s return to some data. 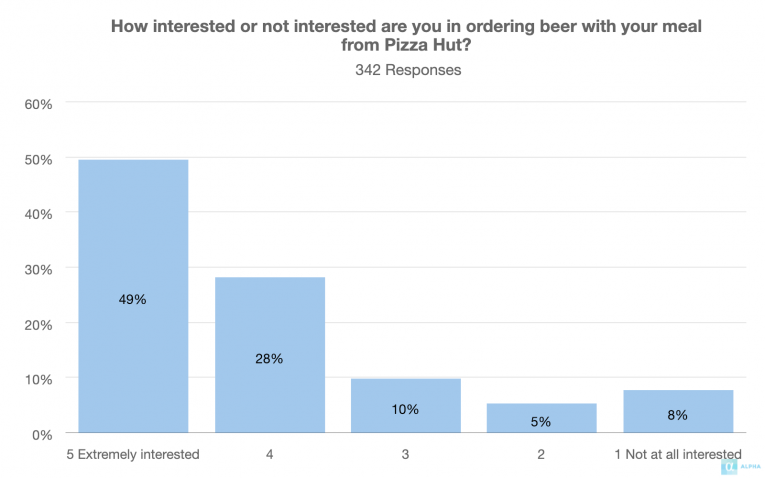 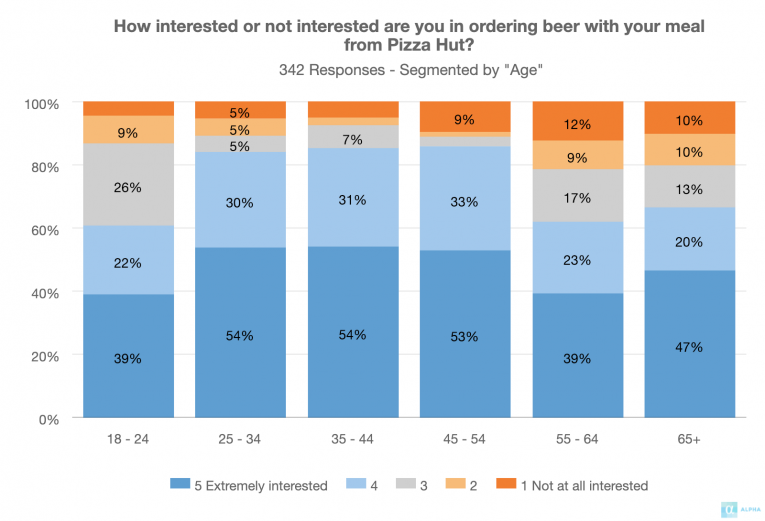 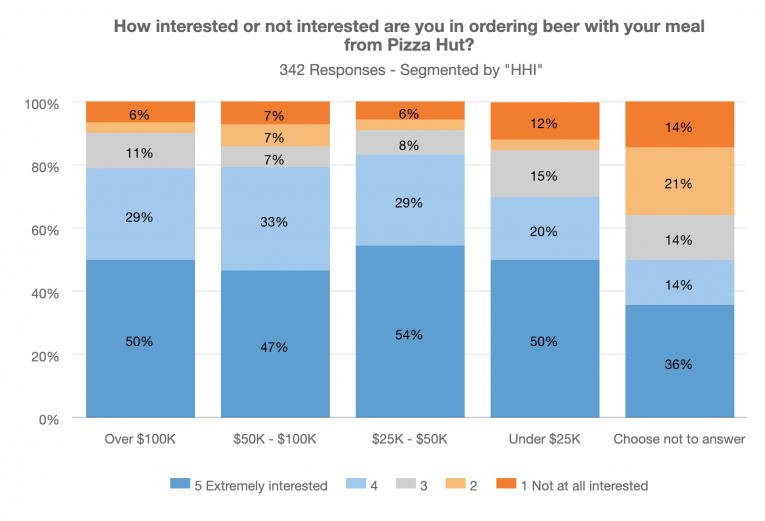 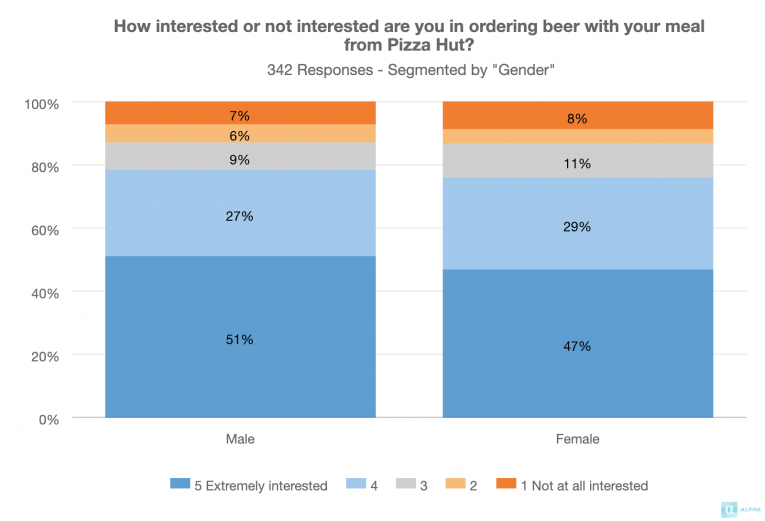 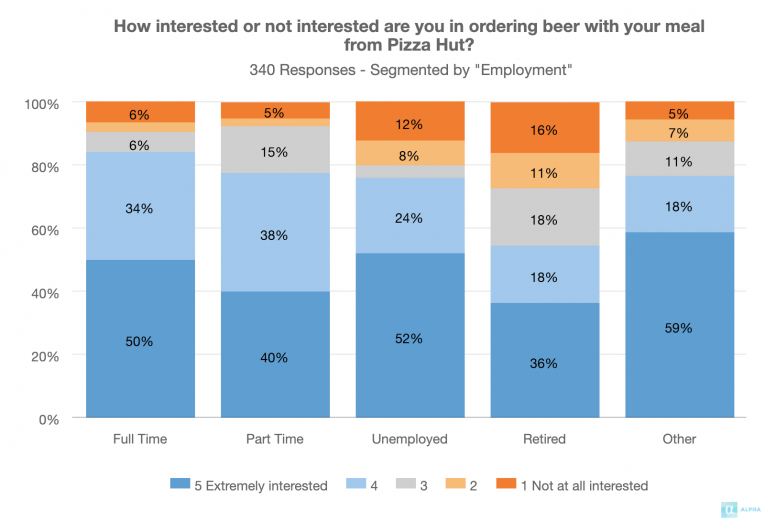 How convenient or inconvenient would you find this service? 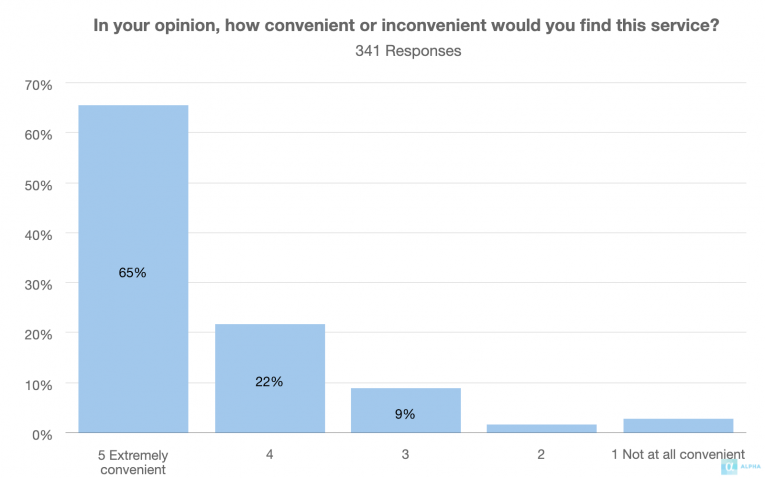 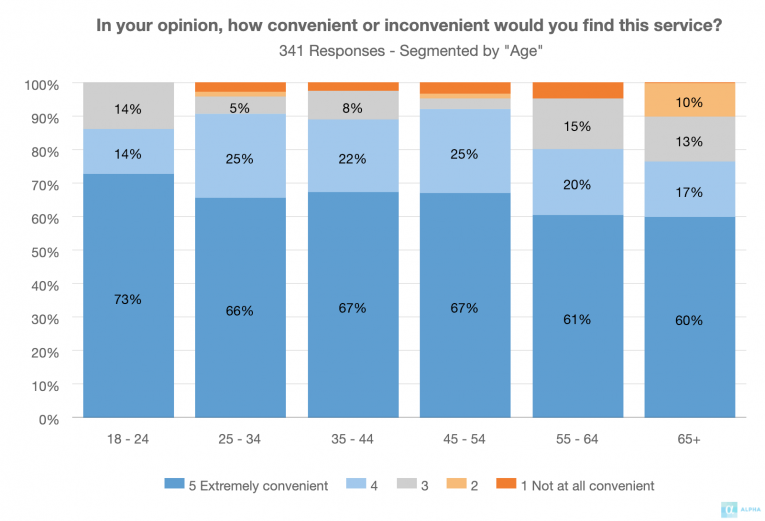 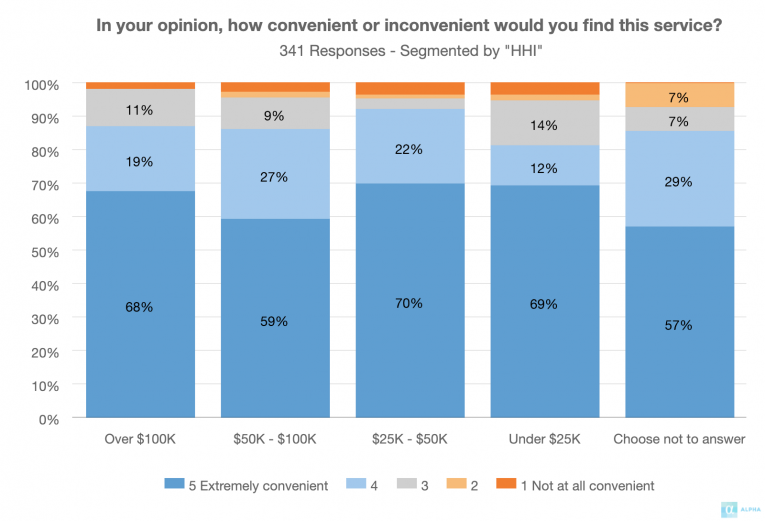 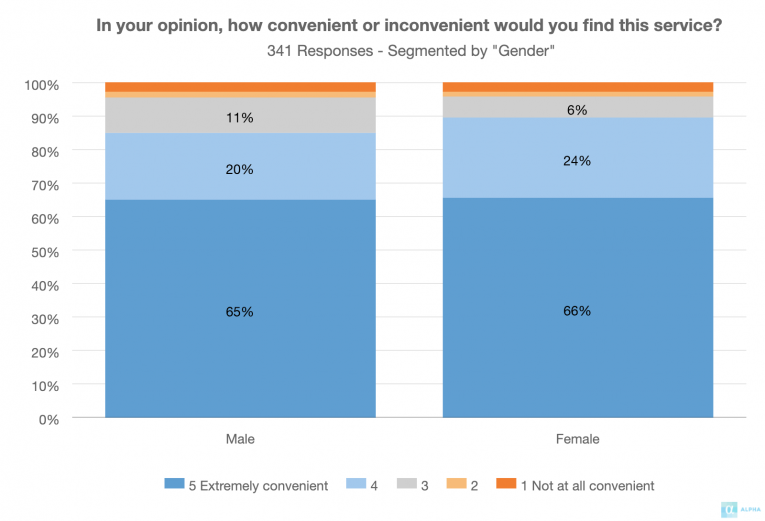 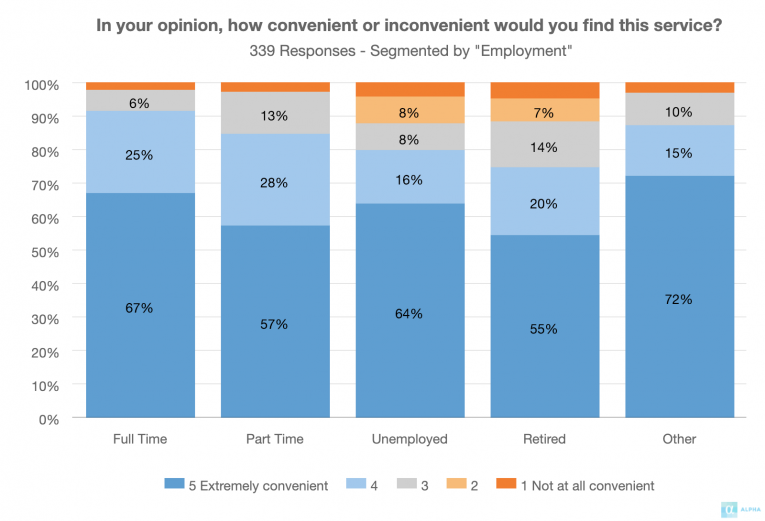 What type of food, if any, are you most likely to order beer with? 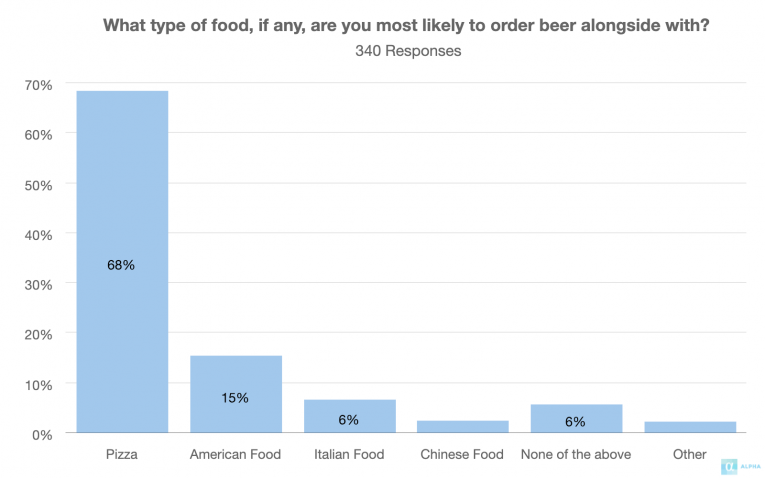 Here are some other open-ended responses from customers.

What do you find most appealing about this service, and why?

“It's a niche market. Not many, none that I can even think of locally, will deliver any alcohol with dinner. If they do it in my local Pizza Huts it would be a hit. We're seldom included in specials like that, they tend to do it in larger cities.”

“If the weather was bad and didn’t want to take a trip to the store myself it might come in handy. Considering no one else offers it in my area.”

“The time saved. Also, there would be more of a choice for the adults in the household as far as choice for that evening.”

What is least appealing? (kind of gets back to the underage issue mostly)

“I find this idea to be trouble in the making for Pizza Hut. The kids under 21 are going to do their best to make this work to their benefit and that could lead to many issues for Pizza Hut and potentially ruin their good reputation.”

“They would not have draft beer in the flavor I wanted, and if they did, the beer would be either not cold enough and they would not be able to bring me the draft beer.”

“For some reason I don't feel great about alcohol delivery. I don't know what it is, but it just feels a little off to me.”

“Risk of serving minors and the cost. Beer at the grocery store would be much cheaper and provide a greater selection.”

So what does this all tell us? It’s an interesting challenge and opportunity because it both capitalizes on consumer behavior and attempts to change it. Pizza and beer are a natural fit, as we’ve seen above, but who orders beer to their house? Almost nobody. Like the one respondent said, “it just feels a little off.” At the same time, though, as evidenced by other answers, the fact it’s a new and fresh service is broadly appealing to younger diners. There will be customers who love Pizza Hut for the offering, and that will tip the scales over competitors. There will also be guests who never consider it and have enough beer in the fridge to make their pizza choice without it. And, in some cases, people will be turned off. Although it’s always easier just to ignore a service than to wish for one that doesn’t exist.

As for the other concerns, it flips two ways. It can be great from the perspective of cutting down, theoretically, on drunk driving. It also, however, clearly worries some consumers in regards to underage drinking. Pizza Hut can market its way around both subjects. Promote the benefit of one while doing everything it can to satisfy concerns of the other. No matter how you look at it, Pizza Hat has whitespace to work with. Will they pull it off? Time will tell.

Can Autonomous Technology Power the Future of Restaurants?
Is Sustainability the Future of the Restaurant Supply Chain?
Coffee Chains Brace for their Latest Challenge—Inflation