You probably know one. They’re young, motivated, mobile, and ready to spend money.

Look out quick serves: Generation Y, aka the Millennial Generation, is coming on strong. From third-graders to grownups pushing 30, they want it their way from Burger King and every other industry player. The smart restaurants will make sure to comply, because the Millennials number 92 million, making them the largest generation in the country. And they aren’t the grin-and-bear-it type.

“Like most people, those of the Millennial Generation value an operation that takes responsibility for its products and services, is honest in the way it conducts its business, and makes customers feel like they matter,” says Lee Igel, assistant professor at New York University’s Preston Robert Tisch Center for Hospitality, Tourism and Sports Management. “But their feelings about all of this, and the way they react to good or poor products and services, are more intense than those of prior generations.”

Call it “intense” or “demanding” or even “spoiled,” there are reasons Millennials, generally defined as the people born between 1981 and 2002, have such high expectations of businesses. One is that, having grown up coddled by their parents during “one of the great child-protection movements in American history,” according to Neil Howe, an authority on generations, Millennials naturally believe they deserve the best.

“I will not tip as well if my server doesn’t make me feel like they’re speaking to me, seeing me, serving me.”

“We’re a group of young people molding our own conventional lifestyles. We are organizing city farms, we’re conscious of our impact on our environment, and we’re blurring the lines of traditional families. We are the ‘I’ll take organic milk and ride my bike’ kids, and I think we’re headed in the right direction.”

“I think I am somewhat sheltered when it comes to knowing about different kinds of food. I wish I knew more. I’m not a picky eater and am willing to try anything!”

“I remember numerous instances when I felt the teacher was mistaken and I truly had the best approach to a problem. Challenging what has been typically accepted and successfully reframing these values to fall in line with our own ideals has promoted us to believe the idea of ‘Yes, we (Gen Y) can’.”

“They think they are all collectively special,” says Howe, whose consulting firm, LifeCourse Associates, has advised Darden Restaurants and White Castle. “Millennials always like feeling that they are being rewarded.”

In his writings, Howe identified what he considers the seven core traits of Millennials. They are: special, sheltered, confident, team-oriented, conventional (or “neotraditional”), pressured, and, unlike their predecessors in Generation X, driven to achieve.

Each of these traits has implications for the restaurant industry. Take the Millennials’ orientation toward teamwork, groups, and community. It is this characteristic that has driven the rise of social media sites like Facebook, YouTube, and Twitter, which have transformed the way restaurants reach out to their customers and build brand awareness. A strong Internet presence is now an imperative for any restaurant looking to expand, and many companies dedicate a lot of time and money to improving their web strategies.

But the Millennial Generation is looking for more than Facebook group pages and cutesy tweets. Its desire for community is deep, Howe says, and restaurants need to make sure they are building relationships with their customers that extend beyond the Internet.

“Social media can be a mile wide and an inch deep,” he says. “What is an individual Domino’s franchise doing in its own neighborhood? And what does it show off that it’s doing? I think that might be actually more crucial.”

Howe says restaurants can adapt to the Millennials’ community spirit in various ways.

“Community actually has several important implications for the restaurant industry,” he says. “One is the extent to which restaurants make it easy for people to come in and eat in groups. Is it easy for them to make group reservations? Can a lot of people come in? Can they have exclusive functions?

“When you have a more community-oriented generation,” Howe says, “it’s very important the restaurant industry take advantage of that.”

One chain that has realized this is Burgerville, which has 39 locations in the Pacific Northwest. The company has a diverse community-outreach strategy, which includes the Nomad, a mobile kitchen that cruises the streets of Portland, Oregon, and a “Community of Champions” initiative that recognizes locals championing fresh foods.

Both tactics “give Burgerville a face,” says CEO Jeff Harvey. This is a must for restaurants looking to appeal to Millennials, a demographic driven by “a whole bunch of different motivations at the same time.”

Burgerville’s efforts to appeal to Millennials also extend to restaurant design. The company embraced a lounge atmosphere because its college-age customer base wants it that way, Harvey says.

“Companies in our line of work have to be ready to adapt and adapt quickly,” Harvey says. 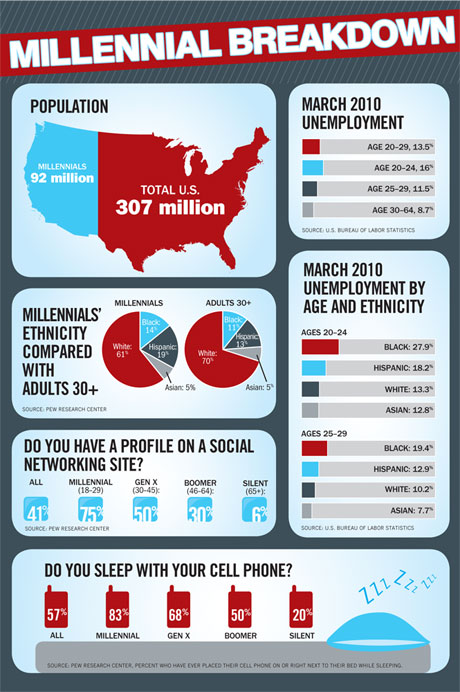 Burgerville’s strategy says something crucial about what Millennial diners are looking for. Food and flavors still matter, especially since Generation Y is an ethnically diverse group hungry for more international menu items. But restaurants have to offer much more than good fare to be successful. In line with their own emphasis on achievement, Millennials want restaurants that excel in all aspects of their business, from food to service to design.

“It’s a matter of understanding the nonfood expectations as much as the food,” says Bob Goldin, an executive at Chicago-based consulting firm Technomic.

One of the most challenging expectations among Millennials is that corporations operate responsibly. For restaurants, this means establishing a safer, more humane, and, perhaps, more regulated supply chain. (Howe says Generation Y is open to “benevolent direction” from the government.) It also translates to an emphasis on sustainable business practices, with recycling being a bare minimum.

“It’s a generation that in many ways is much more demanding with respect to social consciousness,” Goldin says. “They’re concerned with making the world a better, safer, gentler, kinder place. It certainly has implications for how restaurants market, what products they use, and what products they sell.”

Goldin cites Chipotle as a brand that is ahead of the curve on this front, in part because of its commitment to buying humanely raised meat.

Still, Goldin cautions against exaggeration. Running a business with a conscience can get expensive and, especially after the recession, Millennials aren’t necessarily up for absorbing pass-on costs.

“Let’s not kid ourselves,” he says. “Cheap tacos are still going to drive a lot of occasions.”

While the recession may impact the Millennials’ spending habits, Howe doesn’t expect it to alter their core traits, including their optimism. This is surprising in a cohort experiencing higher-than-average unemployment (16 percent for ages 20–24; 11.5 percent for ages 25–29) and without much hope of doing financially better than their parents.

The thing for businesses to understand is that those life goals include having a meaningful career. So, as employers, restaurant operators have to offer Millennials more than a stagnant position at the drive-thru window. With their confidence, team spirit, and drive to achieve, they need to feel that they are an integral part of their workplace, not expendable cogs.

“As digital natives, they really come prewired with a different set of expectations,” says Diane Spiegel, who, as CEO of the End Result, has helped several quick serves develop an employee-management strategy. “They are connected into the world in many ways [through the Internet], so even as entry-level employees feel that they have something to contribute.

“Working for Planet Smoothie is great because it teaches me how to work with a partner to get the most work done in the least amount of time. It takes a team to get through a line that’s out the door.”

“I definitely know that I have a drive to achieve, and I think that goes along with putting a lot of pressure on myself. I would like to eventually start and run my own PR and marketing firm. I’ve put this goal on myself, so I definitely think the pressure is on.”

“No matter who you are or who you choose to be, there are more groups of acceptance and affirmation now than ever before. These groups give people a community to fit in and a way to feel good about themselves.”

“It’s not like generations ago, where employees came in as clean slates. They want to be able to share and collaborate.”

While this trait may turn older generations off, Spiegel insists it is positive and urges restaurant operators to make good use of Generation Y’s desire to get involved at work.

“They just come to the workplace with a different set of skills and expectations,” she says. “Harness that. Leverage that. Use that.”

So far, Spiegel says, the restaurant industry as a whole has not done enough to harness the Millennial Generation’s energy and particular skills.

“They’re slow to it,” she says. “Especially with the economic conditions of the last couple of years, they have not been willing to make the investment.”

The risk, Spiegel says, is that another generation may see an entry-level position at a restaurant as a dead-end job, rather than the first step in an exciting career. But if restaurants decide to embrace Millennials at a quicker pace than other segments, the result could be a sea change in an industry notorious for high turnover and poor labor relations.

“If they knew what was down the road for them, in terms of career opportunities and the ability to grow with the company, they would certainly have a lot of loyalty,” Spiegel says.

With the youngest Millennials less than 10 years old, it is not too late for the industry to catch up. But appealing to the country’s largest generation, as consumers and employees, means restaurants embracing the present, anticipating the future, and, in many cases, rejecting the past.

“You have to be willing to do away with yesterday,” NYU’s Igel says.

How COVID-19 Made One Emerging Fast Casual Stronger
Association CEO: Restaurants ‘Convenient Scapegoat’ for Shutdowns
How Wingstop Became a 'Category of One'

How Being 'Intentionally Agile' is Boosting Wingstop
Is The Restaurant of the Future Already Here?
Should Restaurants Charge More During COVID-19?

New Restaurants are Starting to Open in the Pandemic
Peace in Chicken Sandwich Wars? One Brand Hopes So
Restaurants, Down $200 Billion Already, Prepare for Election Fallout

How National Chains Can Make Local Waves During COVID
How to Create a ‘Culinary Identity’ with Fast-Food Advertising
Rideshare: A Premium OOH Opportunity for Restaurants?

Why a Digital Hiring Mindset Can Attract the Best Talent
McDonald’s Hires Tiffanie Boyd to Lead Human Resources in U.S.
What Biden’s Win Could Mean for Restaurant Labor