Clean Juice, Tim Tebow, and the Start of Purpose-Driven Growth

Landon Eckles is getting into a story on Clean Juice’s origins when Tim Tebow interjects. “If she wouldn’t give [the food] to one of y’alls 19 kids, why would you do that?” he jokes, referencing the brand’s early guidepost—to serve product Landon and his wife, Kat, would be comfortable giving their children (there are actually five). The rapport between Tebow, the 6-foot-3, former Heisman Trophy winner, and the husband-wife duo behind one of the country’s fastest-growing franchises, however, is evident. And it’s a relationship that began much like Clean Juice did in 2014 when it debuted in Huntersville, North Carolina—from a view broader than ROI.

Clean Juice was opening a store in Nocatee, a planned community located in northern St. Johns County, Florida, minutes from where Tebow won a state football title at Nease High School. Tebow was sampling juices and products and asked to meet the brass.

“And when Tebow says that, you go,” Landon recalls.

The Eckles flew down and met with Tebow and his wife, Demi-Leigh. Landon says they didn’t talk about business “for months.” It was mostly a conversation around making an impact with Tebow’s Quarters 4 Kids initiative, and finding synergy. For three hours, Tebow adds, they spoke about ministry, exercise, and even Jiu-Jitsu.

That’s not to say Tebow’s mind wasn’t churning, though. “I started to understand the background of all the product [Clean Juice touts itself as the nation’s first and only USDA-certified organic juice and food bar franchise],” Tebow says. “Since I was 15, I’ve just been so focused on health. I believe in the stewardship of it. I believe what we put in our body either gives us life or it takes life. And what I mean by that is it takes focus, it takes energy, or we lose it from it ... If we want to actually live life to the fullest and the best, let’s give ourselves the nutrients to actually do that.”

In August 2021, Clean Juice unveiled Tebow as its official brand ambassador and got moving on activations. This included social media, web, point-of-purchase materials, product development (Tebow had his own curated meal), and the company’s first national TV spot.

“Started with a handshake and slowly worked into the partnership,” Tebow says.

Clean Juice billed the partnership as an accelerant for its next stage of growth. Or as Tebow puts it, helping “make it a household name in the organic food and beverage business.”

The chain opened seven stores in Q2 of this year and awarded an additional 13 units to first-time and multi-unit franchisees. That brought the total number of Clean Juice locations in the company’s system to 203, with 127 opened and 76 in development as of September. Its same-store sales rose 3 percent, year-over-year, with the total guest percentage up more than 9 percent from Q2 2021. Clean Juice cracked the Inc. 5000 for the fourth calendar and was ranked No. 21 on the top fast-food brands to watch.

It’s been a quick rise. Clean Juice had 72 franchise outlets at year-end 2019, which was up 25 net from the prior year. The brand would add a net of 17 locations in 2020 and 2021, respectively, alongside six corporate venues (none opened last year as franchising, which launched six years ago, has settled in as the main path).

Clean Juice reported its best Q4 in brand history to close 2021 with cumulative same-store sales gains of 20 percent. Across the year, comps rose 16 percent against COVID-riddled 2020. But notably, the brand served more than 3.3 million total guests, which was 41 percent higher.

Tebow’s role in this evolving story isn’t going to just be a front-facing one. On September 21, Clean Juice opened its third Northeast Florida location in the St. John’s Town Center, wedged between a Visionworks and BurgerFi. And Tebow was the franchisee. 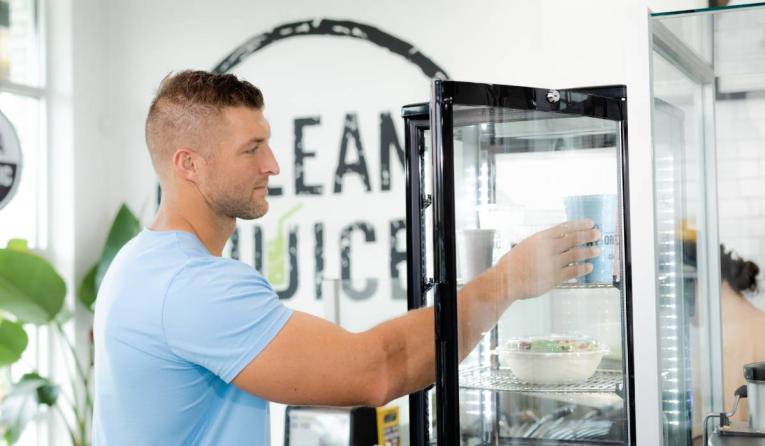 With Clean Juice, Tebow wants to break down barriers to healthy food and widen accessibility.

His jersey is on his display and Landon says guests “definitely” realize it’s the “Tebow store.”

When asked if this is unit No. 1 of a potential fleet, Tebow nods at Landon and says, “hopefully.”

The sentiment covers Clean Juice’s wider ambitions, too. Landon says the brand hopes to serve 30 million guests some day. Eventually, 100 million, and beyond.

Through COVID, Clean Juice closed only one restaurant. Landon believes the reason dovetails with what’s also fueling expansion, and explains how a brand, relatively small in its category, could land a celebrity endorsement like Tebow. “It’s the passion of our owners,” Landon says. “They truly believe that when they open a Clean Juice in their community that they are making an impact and they’re serving food they can’t get anywhere else.”

Going back to Tebow’s first meeting with Clean Juice, he explained to the Eckles there were mega-watt offers out there from brands he couldn’t get behind. Clean Juice couldn’t touch the dollar figures, but it had a mission Tebow supported.

Tebow’s goal isn’t new to quick service. He wants to break down barriers to healthy food and widen accessibility. Tebow was on the chair of Florida’s governor’s council of physical fitness when he was in college at UF. He cites obesity studies and freely talks about nutrition.

Making his own juice, Tebow combines spinach, celery, cucumber, lemon, ginger, and turmeric. He generally loads up on protein and cycles through shots. Tebow “crushed” a couple of juices before taking the stage in August to surprise operators at Clean Juice’s annual “Juice Jam” conference, held in Charlotte.

But simply, just as the Eckles wanted to make a concept they’d feel good putting on the family table, Tebow felt the same about one he’d open franchises for. “There are a lot of places where you are saying, this is healthy, and they’re putting stuff in it. And I just think it’s really important that you build trust that what you say is accurate,” Tebow says.

Landon feels the same, which is why Clean Juice carries the organic banner. It’s an ethos that was never easy to execute and comes at a cost, especially as the brand expanded its menu in recent years to include sandwiches, salads, and wraps. 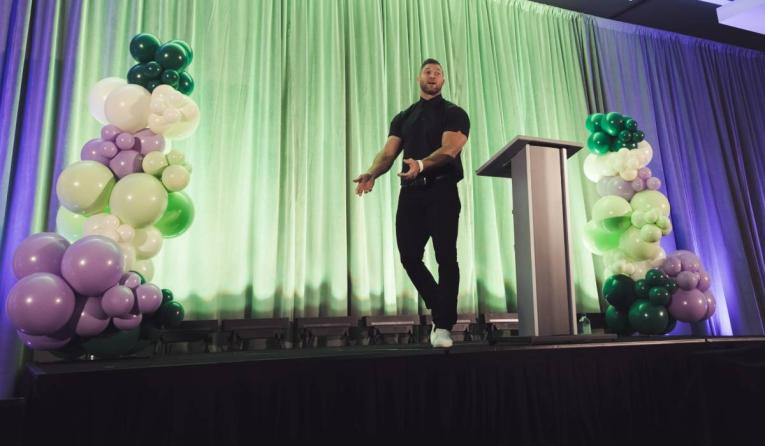 "Right now, when someone walks in you have the opportunity to impact them in more ways than just a bowl or a smoothie or a juice," Tebow says.

When Clean Juice debuted, it only offered juices, smoothies, and acai bowls. “But our promise was always we wanted to have something for everyone,” Landon says. “We wanted to be able to cater to somebody like Tim Tebow or cater to somebody who comes in and maybe they’ve never eaten healthy in their entire lives.”

“What does that mean? Put titles on this stuff,” he adds. “But let’s talk about what does it mean to be certified organic. What happens? What is the grasp? What is the story? And it was a really fun and enlightening conversation that then leads to a lot of conversations, right? Conversations of yeah, sometimes you have to charge more for that because it’s going to cost more to get healthy. We talk about we want to make it as affordable as possible but you’ve also got to keep it as healthy as possible. To do right by people. For us, it never started with ROI—it started with a belief.”

Over the years, however, Clean Juice has worked on that profitability plenty. Landon spent years in sales and management in the pharmaceutical industry before moving into a managing partner role at Rose Rock Group, a global investment management firm specializing in Asia specific projects in 2012. He was spending weeks on the road and overseas. Landon stepped back as his family life suffered. The Eckles then moved to Charlotte and launched Clean Juice.

It’s all helping the story. When Tebow spoke at Juice Jam, his message was to think about food as a circular opportunity. “Not only can you impact them with the product, but you can impact them with your smile, your kindness, with the way that you serve them, with the way that you care about them,” Tebow says. “And try to back it up with statistics. Statistics on belief. Statistics on loneliness. Statistics on obesity. All of those. When people walk into the store, there’s a lot of people who are hurting, who are lonely, who need someone to believe in them, who need encouragement. Right now, when someone walks in you have the opportunity to impact them in more ways than just a bowl or a smoothie or a juice.”

Landon says many of Clean Juice’s franchisees arrived with a reverse mindset from much of the industry. They came in buying in and then asked to learn. Tebow adds many he’s met so far aren’t major business groups or portfolio builders. “No, it’s hey, I want to be healthy and then I learned the business model. That’s been pretty cool,” he says.