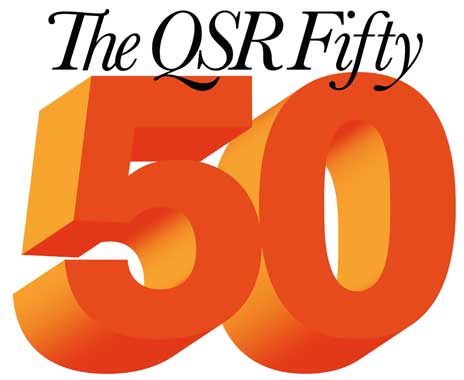 Competition for a spot on the QSR 50 remains fluid, with several Contenders having once held a spot on the big list. Rising brands with hopes to crack the QSR 50 for the first time include Firehouse Subs, Noodles & Company, and Jersey Mike’s, each of which grew in both sales and store counts in 2013. Potbelly Sandwich Works, meanwhile, joined the Contenders list for the first time, fresh off a 2013 initial public offering that thrust it into the national spotlight. Fiesta Restaurant Group brands Taco Cabana and Pollo Tropical also made their Contenders debut, with growth strategies in place that the parent company hopes will push it closer to the industry elite.

Finding more nontraditional venues, like travel plazas and airports, boosted Auntie Anne’s to the top Contender spot and contributed to a $37 million sales boost in 2013 over 2012. Along with a focus on new settings and flexible store sizes—for example, inline stores and baking kiosks—the pretzel chain is making the most of the snacking trend, offering heartier bites like Mini Pretzel Dogs and a pepperoni-topped pretzel, along with a new breakfast lineup.

After a 2012 that boosted its system-wide sales by $100 million over 2011, Firehouse Subs continued its hot streak, boasting $63 million in system-wide sales growth in 2013 and adding 146 total units to the chain. The momentum should continue in 2014, as a new “Hearty and Flavorful” menu adds options that are less than 500 calories, while more drive-thru service will add incremental sales.

Despite falling out of the QSR 50, where it held the 46 spot last year, budget-friendly buffet chain CiCi’s Pizza did add 43 net units and hauled in $440.6 million in system-wide sales in 2013. In June of last year, CiCi’s added a “Buffet on the Go” offer, giving an incremental lift to overall profits by combining the convenience of takeout with the choice of a buffet, but still at the $5 price point.

Noodles & Company went public in December 2012 and continued to show solid growth through 2013, adding 53 new units and increasing sales by $58 million over 2012. Flatbread specials, new salads, and flavor-forward options like Thai Hot Pots helped round out the brand’s varied menu.

While falling short of its goal to crack the QSR 50, Jersey Mike’s did jump five spots in the Contender rankings, with $406 million in system-wide sales—a $72 million increase from 2012—and 129 units added to its store count. The franchise system now has more than 1,300 locations open and under development, taking to all corners of the U.S. its claim to fame: sandwiches served “Mike’s Way,” with onions, lettuce, tomatoes, vinegar, oil, and spices.

In its first year under Argonne Capital Group ownership, Krystal’s sales were relatively stagnant over 2012, increasing by around $3 million. The brand celebrated its 81st anniversary in 2013 with a new brand campaign launch and plans to have 500 stores within the next few years. The Atlanta-based chain continues to experiment with meal deals and new menu options, with fish sandwiches and pork chop sandwiches being two notable additions to the menu in 2013.

Despite recent recipe renovations and a brand relaunch, Sbarro was down $30 million in system-wide sales in 2013 over 2012, saw its unit count drop by 30 stores, and filed for bankruptcy in March 2014. Mall-heavy real estate continues to be the real problem for the pizza chain, as traditional malls—its bread and butter real estate—see a decline in shoppers. The brand’s hope may lie in the fast-casual industry; Sbarro opened two units of the spinoff Pizza Cucinova concept, which features build-your-own pies.

Au Bon Pain kept an even keel in 2013 by emphasizing sandwich construction and new ingredients. Made-to-order hot sandwiches were the big news last year, with high-tech ovens promising even heating. The bakery-café chain, which has played well with health-minded consumers, maintained that standing with new touches like sprouted-grain bread.

Breakfast was the big Taco John’s story in 2013. Company officials reported a 20 percent increase in breakfast sales, making it the fastest growing daypart for the 400-unit chain, which boosted its system-wide sales by $6 million over 2012. A new Flamin’ Hot Cheetos Burrito released this year could capture the same interest from customers as Taco Bell’s Doritos Locos Taco.

Dallas-based Corner Bakery Café managed solid gains compared with 2012, with sales up $27 million and a dozen stores added to the chain’s unit count. The company took a tech-heavy focus in 2013, with a website redesign that supports easy browsing and tablet and mobile phone ordering. Now on the agenda: moving into new parts of the South and California.

Miami-based Pollo Tropical ended 2013 with $305.5 million in U.S. system-wide sales, enough to land the company on the Contenders list for the first time. The Caribbean-inspired chicken concept last year set its sights on new Texas locations, as well as opening 13 corporately owned restaurants in Florida, Georgia, and Tennessee.

For a quaint brand that started in an antiques store, this sandwich shop has come a long way. Potbelly Corporation’s initial public offering (IPO) brought net proceeds of about $108.8 million in 2013, while the chain also enjoyed nearly $305 million in system-wide sales and bumped its total store count to 307 last year.

San Antonio–based Taco Cabana celebrated its 35th anniversary in 2013 and used the occasion to throw a grand reopening of the chain’s first location, which had been remodeled. This year, the brand kept the reimage push moving, introducing a new Cabana Grill concept to the Atlanta area that features a new look, atmosphere, and menu. For more on Taco Cabana and Fiesta Restaurant Group sister brand Pollo Tropical, click here.

Fuddruckers fell back one spot in the Contender rankings this year and is now at risk of dropping off the list altogether. The biggest piece of domestic news to come from the burger chain was the introduction of a gluten-free roll, baked by Dallas-based bakery Local Oven. This addition helped contribute to a $1 million sales increase over 2012. Net store count, meanwhile, fell by one unit.

Is a Golden Era of Fast Food Upon Us?
The New Order of The QSR 50 in the 21st Century
Shake Shack's Big Bet on Drive-Thru is Paying Off