In what’s become perhaps the most-bursting world of quick service, Slim Chickens has had no trouble standing out.

Special Report | January 2022
Slim Chickens
Slim Chickens has big aspirations, and plenty of momentum to get there.

For Slim Chickens, the bar was set when franchising began nearly a decade ago—reach 600 locations by 2025.

The proclamation was injected with more life after an equity investment in 2019 from 10 Point Capital, a firm that also backs fast-growing Walk-On’s, which saw its unit count expand by nearly 40 percent in 2020, and Tropical Smoothie Cafe, a chain that recently exceeded 1,000 stores.

“We really were able to speed up franchising and speed up franchise development,” says Tom Gordon, who co-founded the chain in 2003 with Greg Smart. “It allowed us to recruit more, hire more people, not be as constrained budget-wise when it came to payroll and executives and hiring and travel, and allowed us to really start moving around the country and doing the things we needed to do as a franchisor to really grow the business.”

But as Gordon explains, 150-unit Slim Chickens—QSR’s Breakout Brand of the Year for 2021—already “had a good fire going” before 10 Point Capital entered the business. The investment was really just a matter of pouring gasoline on the flames.

CHECK OUT LAST YEAR’S BREAKOUT BRAND OF THE YEAR

The brand opened a record 23 stores in 2019, and still managed to debut 19 outlets during a pandemic-ridden 2020. Last year, Slim Chickens returned to its rapid pace with roughly 40 openings, but that high mark shouldn’t hold for long as the chain expects 50–70 units annually in the years beyond. Same-store sales lifted 14 percent in 2020, and the chain reached a similar level in 2021.

There isn’t a single part of the cylinder that Slim Chickens hasn’t hit.

“We built the brand out early,” Gordon says. “We wanted to be a good quality brand—quality food, quality service. You know, table stakes in the industry. We also wanted to make sure it was an investment-grade proposition. To do that, we had to, in 2013, retool the model, make sure the economics worked, and understand the franchising business.”

Around those early stages of franchising, Chief Operating Officer Sam Rothschild came onboard with more than eight years of executive experience with Applebee’s. The restaurant veteran describes the model-building process as a methodical overview and refinement of every department, including an evolutionary menu.

At the time, Slim Chickens was recognized for its tenders, wings, wraps, and salads. But the brand saw opportunities to formulate culinary innovation that was unique to the fast-casual segment. The chain created a Chicken and Waffle dish that comprises fried tenders over a waffle, with syrup and butter. The item has become so popular people commonly associate the brand with it, Rothschild says.

“All these things are Southern at heart and speak to the brand,” Rothschild says. “I think you put all that together, it just enhanced the core offering that we already had, which was excellent. But we knew that we had some gaps and some items that would be unique to us that you can’t get anywhere else.”

Barnett Management Company recently signed an agreement to open 32 Slim Chickens restaurants over the next decade.

Rothschild and Gordon essentially handled all of the franchising business from 2013–2018, which resulted in about 200 deals being signed, including a couple internationally. Then Jackie Lobdell entered the fray as executive director of franchise development, with more than 25 years of sales professional experience, including Focus Brands, where she helped McAlister’s Deli expand to more than 400 stores across 28 states. From 2013 to present, workforce at the support center grew from a handful to over 40 individuals.

These operators are well-funded and typically mid-to-large franchisees of other brands looking to complement their portfolio with another chicken brand. A good example is Barnett Management Company, an Arizona-based franchisee that operates more than 50 Burger King stores. The operators signed an agreement to open 32 Slim Chickens restaurants over the next decade.

“They see the success that the brand is having and what we have to offer not only to consumers, but the way that we support the franchisees with all the systems and processes and tools that we provide,” Rothschild says. “I think we’re able to attract some really high-caliber franchise talent that has come into this organization and not only joined us, but helped make us better.”

“We really admire entrepreneurs,” he adds. “We listen to what they have to say for the betterment of the brand and the system. I think if you put all that together that’s why we’re seeing the ramp up and growth and the addition of all these new franchisees coming into the brand.”

Similar to many up-and-coming chains, Gordon says, Slim Chickens restaurants require “good-looking, sexy retail” supported by housing stock and other traffic attractors like hospitals and malls. Typically, stores are between 2,400–2,800 square feet and adaptable to patios and unenclosed or enclosed kitchens.

He estimates 90 percent of the footprint is standalone drive-thru units, but there are some anomalies—endcaps, inline locations on college campuses, and military bases. The brand is no stranger to conversions, either, an important skill set given how many restaurants across the industry closed permanently during the pandemic.

The markets with the most opportunity for development include the Upper Midwest and Northeast, like Minnesota, Michigan, Ohio, Pennsylvania, New England, and West Virginia. 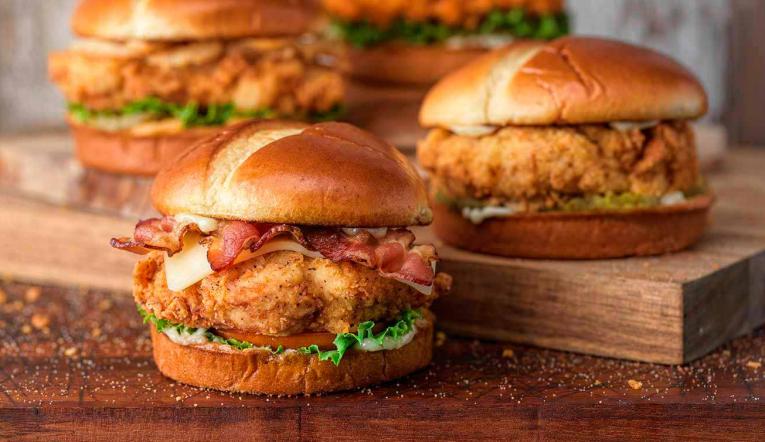 As Slim Chickens’ unit count continues to rise, onlookers shouldn’t expect the footprint to account for ghost kitchens or virtual brands. Gordon says ghost kitchens skyrocketed during COVID to leverage inventory and labor that weren’t being used effectively. However, the chicken fast casual remained busy throughout the pandemic, and hasn’t had a need for either innovation.

A minimal number of stores closed, and drive-thru, curbside, and delivery continue to be fruitful.

“So rather than try to create a new brand out of kitchens that were already busy, we tried to focus and make sure that the drive-thru experiences was good, curbside experience was good,” Gordon says. “We worked on the timing, speed and efficiency, and packaging around our delivery business with the delivery partners that everyone is aware of. We just try to focus on those channels and then as the dining rooms have come back, we’ve layered those back in.”

Heading into 2020, the gameplan was to open about 25 stores, but the chain still finished with 19 debuts. And the ones that didn’t open simply slid into the next year. Gordon says after the “scary moments” of Q1 2020, Slim Chickens got back on track. When COVID first hit, leadership quickly gathered everyone virtually and emphasized there would be no furloughs.

In fact, considering what occurred in 2020 and 2021, the brand is at—or even ahead—of its preferred timeline. To Rothschild, experiences during the pandemic demonstrated the confidence operators had in Slim Chickens.

“I think the franchisees, along with us, did a great job of figuring out where we could get momentum,” Rothschild says. “We can make progress where we can get restaurants open, and the support team really worked diligently to make sure that we could get the best results we could with the situation that we were dealing with.”

As the brand faced macroeconomic headwinds like supply chain stoppages, Slim Chickens urged franchisees to be proactive and double timelines for equipment and construction materials. Leadership helped operators schedule restaurant opening dates, and then worked backward to deliver appropriate guidance in terms of ordering items. Gordon says some things “slip around a little bit,” but he adds most franchisees are exactly where they want to be. 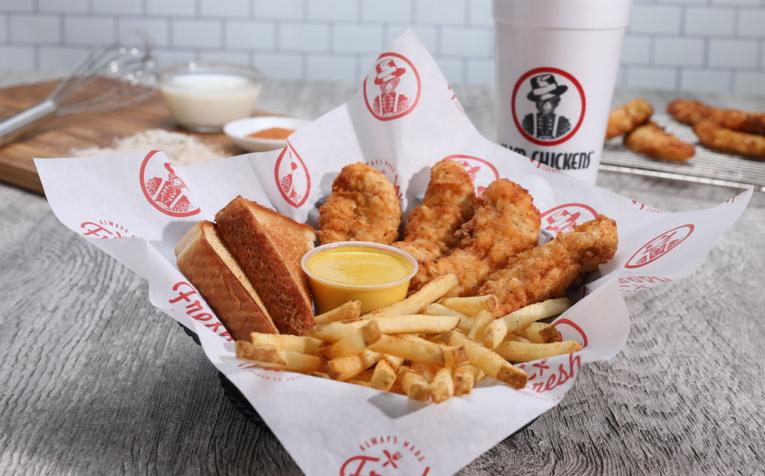 Can Slim Chickens get to 600 units? History is pointing that way.

The other notable headache, labor, hasn’t been too much of an issue, Rothschild says. Restaurants usually hire 90–100 people, and there are challenges occasionally, but for the most part, managers are able to staff appropriately and retain workers.

A significant reason for that is partnering with the right franchisees. For instance, Preferred Restaurant Group, which has more than a dozen Taco John’s restaurants and owns development rights to Slim Chickens franchise stores in North Dakota and Montana, placed general managers in a position to earn six figures, increased starting wages, and instituted a $5 per hour bump for those working past 10 p.m.

“I go around and talk to all the employees at the restaurant openings and ask them why they work here or if they’ve had other jobs, and there’s this aura around Slim Chickens that allows us the opportunity to hire and retain a staff,” Rothschild says. “Now, not saying we’re Pollyanna here and we’re not having staffing challenges, but if you want to connect new restaurant openings to staffing, we’re able to get these things staffed and get them open.”

Gordon says much of Slim Chicken’s success is listening to what operators hate about franchising—i.e. non-communicative, lack of proper investment in profitability, unrealistic outlooks—and simply doing the opposite.

That mission is upheld by a C-suite that’s stayed together for a number of years, including eight years from Rothschild, 10 years from CFO Seth Jensen, and five from CMO Chris Allison.

It’s more than enough fuel for Gordon and his team to continue believing in the 600-unit goal that was proposed all those years ago.

“We all own the business together, so it’s not like we’re leaving to go do something else,” Gordon says. “ … [Franchisees] can believe in us. We’re transparent, honest, and really have the interest of our franchisees at heart. As you see the growth happening, we’ll get to that 600 number on or about the place that we anticipated.”

Report: Restaurants 'Desperately' Looking for More Aid
Restaurants After COVID: An Industry for the Better?
As 2022 Arrives, The Restaurant of the Future Comes Into Focus