Once the dreamy-eyed vision of futuristic thinkers, innovations like robotics and artificial intelligence are weaving their way into the quick-service world.
Special Report | March 2019 | Daniel P. Smith

From a compact, 200-square-foot kiosk located on the University of California’s flagship Berkeley campus, Bbox serves a collection of hearty goods, including pastries and java from local purveyors Semifreddi’s and Highwire Coffee Roasters, respectively.

Save the customers filtering in and out of the young concept, there’s not a human in sight.

No barista handing out steaming cups of joe.

Rather, consumers order ahead via a mobile app before picking up their goods—prepped and loaded into a cubby by a robot—at the Bbox kiosk.

This, of course, is the wild plan Greg Becker and Scott Lessans cooked up years ago. As cofounders of Nourish Technology, Bbox’s tech-savvy parent company, Becker and Lessans saw technology as a means to alter the way food is ordered, cooked, and consumed. It was an opportunity to revolutionize the status quo with a restaurant concept that the creators of “The Jetsons” might have concocted.

“We’re servicing the occasion, allowing people to get something quick that they can enjoy as they’re on the move,” Becker says.

Bbox is undeniably futuristic, unapologetically bold, and, just possibly, a harbinger of things to come in the pressure-packed quick-service world, one in which high-tech tools like robotics and artificial intelligence (AI) have arrived to offer a competitive boost.

As robotics and AI enter the quick-service world, no cuisine or format is off-limits.

In San Francisco’s Bay Area, Zume Pizza uses robotics and AI to craft its pies, from pressing the dough and spreading the sauce to placing pizzas in the oven. Down the California coast in Pasadena, CaliBurger tested AI-powered facial recognition software that allowed customers to pay for their meals with a glance into the camera.

But it’s not just the starry-eyed upstarts bringing the high-tech flavor. Last fall, Pizza Hut unveiled the PIE Pro, a delivery-focused innovation in which a pre-assembled pizza is cooked and sliced within the bed of a Toyota Tundra pickup truck before being dispensed to the customer.

Companies like Clinc and Encounter AI, meanwhile, are helping established quick-service players integrate AI into their drive thrus to fuel a faster, more accurate experience. From prompting the customer to order and processing the request to sending the order to the restaurant’s point-of-sale system, Encounter AI’s technology processes a drive-thru order from end to end. Staff members only collect payment and supply the food.

As a kid in Southern California, Alex Vardakostas grew up working in his parents’ two burger joints, A’s Burgers.

“When your job is to make 400 of the same burger every single day, fast, you realize there is an opportunity to make burgers better,” Vardakostas jokes.

There’s minimizing that monotony, of course, but so much more, from improving food quality and product consistency to better utilization of labor. Vardakostas imagined an alternative that would attack the pain points of restaurant operations. Then he built it.

Blending the haute cuisine techniques of alums from Michelin-starred restaurants with the engineering talents of roboticists from Disney Imagineering, NASA, and Tesla, Vardakostas launched Creator last summer in San Francisco’s Financial District. The 2,200-square-foot eatery bills itself as the first start-to-finish, fully automated preparation process for a major food segment. Creator’s robot kitchen assembles its gourmet burgers gently, much different than the rough work of human hands. The robot kitchen also dispenses sauces down to the milliliter, slices buns after an order is placed, and cuts tomatoes, pickles, and onions to order.

An immediate hit, Creator has captured headlines and fans alike for its burgers and tech-powered novelty. Upon watching a robot craft his burger, one reviewer said he was “mesmerized.”

Visionary entrepreneurship and real-world pressures hampering the restaurant landscape are just a few of the factors driving the high-tech world’s rush into the quick-service space. 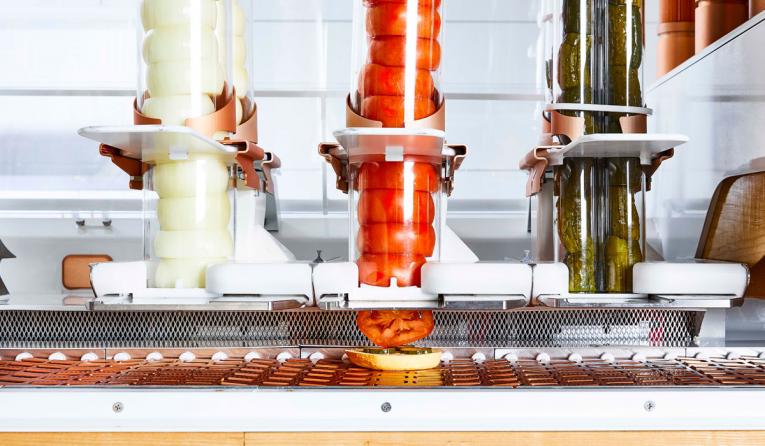 Creator bills itself as the first start-to-finish, fully automated preparation process for a major food segment.

From labor to food to real estate, quick-service restaurants face various cost pressures that threaten long-term sustainability. Technology has long been viewed as an antidote to such woes, especially given the potential of innovative tools like robotics and AI to improve unit-level economics.

“We saw the challenges of the [quick-service] model from the very beginning with Roti, so our idea was to leverage technology to lure better restaurant economics,” Becker says. “The guiding question was: How can we build a better restaurant business model to save as much margin as possible?”

Concepts like Bbox offer impressive cost-savings potential at a time of unprecedented cost pressures. At Spyce, for instance, CEO Michael Farid says the restaurant only needs about four staff members to gracefully man the lunch rush.

“The overhead savings are clear and obvious, and that certainly helps with a brand’s long-term prospects,” Farid says.

Voting regularly with their wallets, consumers have set a high bar for freshness and ingredient sourcing. When a restaurant can develop an appealing culinary formula and then replicate those meals time and time again, it’s an attractive proposition to both the consumer and the operator.

From seasonings shaken out to the gram to expertly toasted buns, Creator’s robot kitchen prepares the concept’s burgers with absolute precision. Freshness and accuracy reign, and consumers see the sustainably sourced ingredients come together before their eyes like never before.

Starting at $6, Creator’s burgers feature pastured, ethically raised beef and ingredients from smaller, local farms. And because the burgers are created—quite literally—at the press of a button, the eatery can spend more of its time on sourcing and maintaining an accessible price point.

At Bbox, meanwhile, a 12-ounce serving of Highwire Coffee runs $2, about half the price that same cup commands elsewhere.

“We’re taking all the savings we’re getting and putting them directly into high-quality items at lower prices,” Becker says. 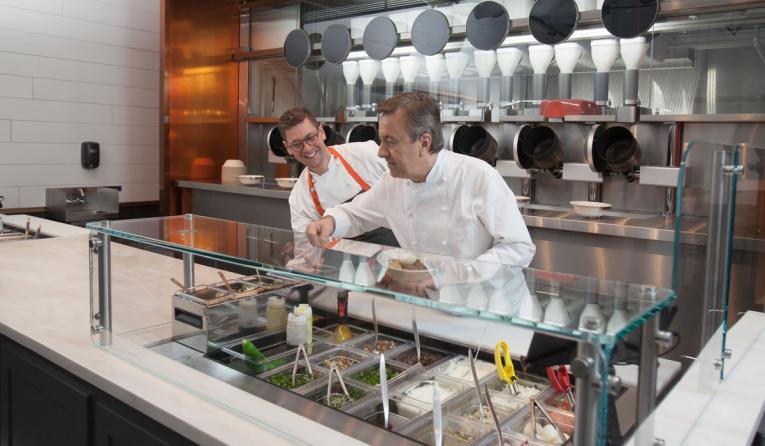 Spyce only needs about four staff members to gracefully man the lunch rush.

A window to improve the guest experience

With technology handling many of an eatery’s rote tasks—food prep or inputting drive-thru orders into a POS system, for example—staff can be strategically activated to deliver a spirited, responsive guest experience.

With robots handling many kitchen duties at Spyce, restaurant staff largely man the front of the house with a singular focus on hospitality and customer service—fetching extra condiments, engaging customers, or shepherding a new guest through the restaurant ordering experience. It’s a reality that runs counter to many other quick-service concepts struggling to ensure a positive dining-room experience.

“When staff are free to do what people are good at, to be present, to provide their best customer service, then that helps the business,” Farid says. “[The automation] gives us an opportunity to shine a light on the front of the house.”

“Our goal isn’t to destroy the human element, but to streamline operations for restaurants so they can deliver true value,” Johnson says.

With approximately 900,000 open jobs in the foodservices industry, according to recent data from the U.S. Bureau of Labor Statistics, finding and retaining workers—never mind reliable, quality team members—remains an ongoing concern for restaurant operators.

The influx of high tech into restaurants, however, has compelling potential to install competitive pay and remove many of the cumbersome, even dangerous, tasks that consume the typical workday. It’s leveraging those tools to create higher-quality work.

To wit: Creator’s staff members start at $16 per hour for work that is creative, social, multidisciplinary, and rooted in problem solving, which is far more personally engaging and sustainable, Bordow says.

Together, the various benefits gained from high tech’s march into the quick-service world bodes well for concepts’ long-term viability and the continued push of innovation into the sector. Pleasing customers with quality food, a better value proposition, and more attentive service while simultaneously building a more sustainable business model, after all, has traditionally been a recipe for industry success.

Still, it’s far from a given that robot kitchens, AI-powered ordering, and the like will consume the quick-service landscape, particularly in the near future. 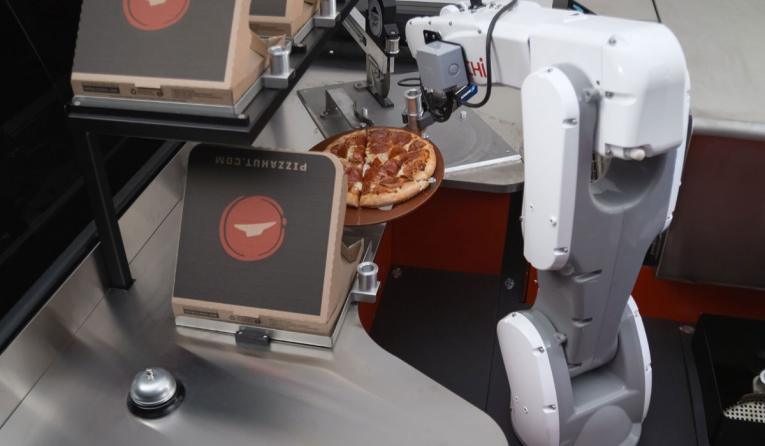 Last fall, Pizza Hut unveiled the PIE Pro, a delivery-focused innovation in which a pre-assembled pizza is cooked and sliced within the bed of a Toyota Tundra pickup truck before being dispensed to the customer.

There is, of course, the matter of capital, as such tech-driven concepts are often expensive propositions. It took a group of four MIT engineering students more than three years to bring Spyce to market, much of that time painstakingly devoted to engineering and design elements. Employing that talent and providing them the R&D freedom necessary to drive innovation is costly. Purchasing such technology on the open market or developing it with a partner, meanwhile, can also be daunting and cost-prohibitive for many.

While there has been a flow of capital into the restaurant industry of late—Zume Pizza reportedly raised a whopping $375 million from SoftBank last year—there’s no guarantee that appetite will continue to grow, especially in an industry long defined by its investment risk.

There’s also a degree of general consumer wariness. While these tech-infused restaurants are certainly progressive and unique, they could also seem more automated production facility than restaurant, a distinct shift from the handcrafted movement that the restaurant world and consumers have so enthusiastically embraced in recent years. Bbox’s work with local purveyors, in fact, was an intentional move to inject humanity into a concept that could easily be viewed as a sterile experience cut out of a 1950s sci-fi novel.

Such challenges, however, haven’t derailed optimism regarding high tech’s place in the quick-service environment.

“Today’s customers have high expectations when it comes to convenience, digital capabilities, and overall experience,” says Nicolas Burquier, Pizza Hut U.S. chief customer and operations officer. “As these expectations continue to grow, we believe tapping tech and innovative advancements will be one of the keys to success.”

As restaurant operators—so many of whom have already automated back-office functions like scheduling or accounting—continue seeking efficiencies, the hunt for technology that can boost operations, profitability, and the guest experience should only intensify, especially amid swelling consumer acceptance and familiarity.

“From smart homes to voice-activated ordering of household staples, consumers are getting more and more comfortable with technological interaction, so it’s only natural to think we’ll see more of this in our retail interactions,” Johnson says, teasing the arrival of voice and facial recognition to streamline payment at quick serves, as well as end-to-end, AI-powered ordering at the counter. “We’re living in an environment in which people want tailored, personalized, near-perfect experiences, and automation is one way we can get there.”

That potential reality draws a smile from folks like Becker, who believes Bbox’s ability to deliver enhanced value to consumers, stronger unit-level economics, and new stores in a diverse array of footprints foretells a promising future for the young, tech-charged company.

“Bbox could very well be the most scalable restaurant concept of all time,” Becker says.

Of course, only the future knows.

New Restaurants are Starting to Open in the Pandemic
Peace in Chicken Sandwich Wars? One Brand Hopes So
Restaurants, Down $200 Billion Already, Prepare for Election Fallout

The Restaurant of the Future 4.0: Hybrid Concepts Emerge from COVID Solutions
With Winter Approaching, It’s Time to Figure Out Delivery
How a McDonald’s Father-Daughter Duo Inspires Positive Change

Yum! Brands, and What It Takes to Hire in COVID Times
Is Flexible Self-Scheduling an Answer to COVID Staffing Dilemmas?
With Diversity, Chipotle Puts Words Into Action