With Sustainability, Restaurants Begin to Find their Why

It’s not easy being green, but green is increasingly essential. In a 2021 survey of roughly 2,000 executives, two in three said environmental issues are “significantly important to them personally.” In that same survey, conducted by the IBM Institute for Business Value (IBM-IBV), 39 percent of the organizations said environmental sustainability was already a top priority in their company and, within three years, 53 percent expect it will have become a top priority.

In the consumer-focused, labor-strapped restaurant industry, the significance of environmental sustainability is a driving force behind brand integrity, corporate responsibility, and bottom-line success. Becoming green-savvy and green-sincere is at the heart of attracting and retaining both consumers and employees.

Across 7,000 consumers surveyed this spring by Censuswide and Deliverect, 43 percent said they are willing to pay more at restaurants that have visible sustainability practices and more than half, 56 percent, would choose a restaurant that uses eco-friendly packaging and does not have single-use plastic.

That said, more than half (again 56 percent) also doubt restaurants are being transparent about their sustainability practices.

Environmental practices and improvements impact recruiting and retention as well: Additional research from IBM-IBV that was released in April reported two-thirds of the workforce are more likely to apply for and accept jobs with environmentally and socially responsible organizations, and nearly half of the respondents said they would accept a lower salary to work at those organizations.

Conveying corporate commitments, policies, and quantifiable results are critical. The IBM-IBV research also found that, while 86 percent of companies have a sustainability strategy, only 35 percent have acted on that strategy. In restaurant organizations, the challenges and opportunities for transitioning talk into action come in many shades of green. Among the environmental impacts most often targeted for improvements are packaging and recycling, food waste, greenhouse gas (ghg) emissions, and water usage.

“What companies are finding, and certainly it has been Wendy’s experience, is that this overall corporate responsibility area has become a heightened focus for all the right reasons,” says Liliana Esposito, chief corporate affairs and sustainability officer at Wendy’s. “Consumers and investors care about it, and taking corporate responsibility is the right thing to do in terms of making sure we are improving the impact; but what has also become apparent is that the companies that focus on these areas and put meaningful effort and resources behind them perform better. At Wendy’s we have seen this is absolutely a benefit—it is not always easy and there is work to do to make sure you are improving your impact, but it is the right thing to do.”

Wendy’s is aggressively tackling multiple areas to achieve improvements and address its global footprint, but meeting environmental targets is not feasible in a single leap, it’s done through baby steps and long-term commitments.

Adding Up to Net Zero

The most widely discussed environmental initiative across all industries centers around goals to reduce GHG emissions, typically referenced as a target of net zero, with benchmarks of 2030 and 2050 often cited. In October, McDonald’s Corp. announced a goal to cut its GHG emissions to net zero by 2050.

Wendy’s has been actively working through its goals and timelines for reducing its GHG emissions, relying heavily on the Science-Based Targets initiative (sbti) [sciencebasedtargets.org].

“We have completed the first couple of steps and a key part is, within the last year, for the first time we recorded our Scope 1 and Scope 2 greenhouse gas emissions to the CDP Climate tool,” Esposito says. “We also conducted a life cycle assessment of our Scope 3 initiatives and reported those results. Going forward, we will continue to report on Scope 1 and 2 and continue to add Scope 3. By the end of next year, we’ll have assigned base targets for reduction of emissions across those three scopes and timeframes will be set as well.”

CDP is a not-for-profit charity that operates a global disclosure system for monitoring and tracking global progress toward environmental sustainability. In 2021, more than 13,000 companies disclosed, up from fewer than 3,000 companies in 2010 and just 300 in 2004. CDP rates the companies based on their positive impacts toward climate change; in 2021, 200 companies made the CDP “A” list. No restaurant companies were among those 200; Wendy’s earned a “B” rating. [CDP.net] 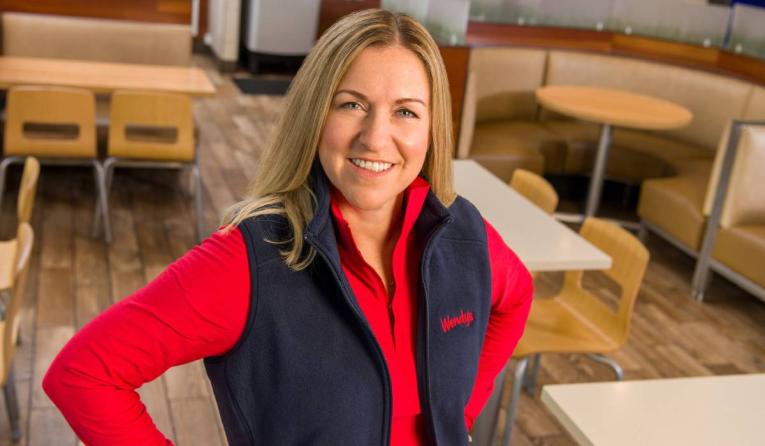 “We are actively reaching out to our suppliers to share with them what our footprint looks like and the role that they play in that footprint,” Esposito says.

Only about 5 percent of Wendy’s restaurants are company-owned, and 99 percent of the chain’s GHG emissions fall into Scope 3.

“With our franchisees, we are still setting reduction targets, but we know a key part of that will be reducing the emissions of our restaurant operations and, in many cases, that will be directly related to energy use in the restaurants,” Esposito explains. “Over the last five years we’ve been part of the U.S. Department of Energy’s Better Buildings Challenge; all our company restaurants participate as well as about 12 franchisees, about 1,000 restaurants total. There has been the benefit of being able to work together around the benchmarking and measuring of electricity and other energy uses, as well as the associated GHG emissions that go along with that. We have voluntarily taken on a commitment to reduce that energy capacity by 20 percent by 2025.”

Working together with franchisees is a win-win as it improves the footprint of each restaurant’s environmental impact and it reduces costs overall. The same holds true on the supplier side, and Esposito notes that the company’s goal to responsibly source its top 10 food categories by the year 2030 includes both environmental and social components.

“We are actively reaching out to our suppliers to share with them what our footprint looks like and the role that they play in that footprint,” she says. “We will be partnering with them to understand what their contribution to that footprint is and what sort of reductions they can make to help us meet our reduction targets. In many cases, our Scope 3 will be their Scope 1, and many of those suppliers have set their own targets for GHG emissions and, even those that have not set targets are certainly working on efficiencies.”

Additionally, Chipotle has formed an internal climate steering committee “to guide decision-making, determine reduction targets, and drive strategy forward to reduce emissions in the most carbon-intensive functions of the business.”

Another topic raised throughout conversations of climate control is water conservation. It’s a concern for all restaurant operators and, in particular, for those where their footprint extends into drought-prone, high-risk geographies.

“In 2021, we developed a program to assess our water risks,” Schalow says. “We are in the process of completing our water risk assessment and then will develop programs to address water usage across our supply chain, ingredients, and restaurants. This assessment will allow us to better understand where our key water risks and impacts lie, and to advise the next steps for water stewardship projects in our facilities and supply chain.”

Similarly, Wendy’s has been focused on water improvements. After completing its own water risk assessment, Esposito says, “we identified that about 40 percent of our restaurants globally exist in areas that are considered moderate- to high-risk, and geographically its exactly where you would expect.”

Perhaps surprisingly, the vast majority of those sites, 85 percent, are located in the U.S.

The company joined the Department of Energy’s Better Buildings Water Challenge in 2019, and set a goal to reduce water usage in company-owned restaurants within the U.S. by 20 percent by 2029, compared against a 2018 baseline.

“Last year we reduced it by 21 percent on the company side, and one franchised unit reduced their water usage by 31 percent, and they operate in Florida, which is a critical area,” Esposito continues. “There is no silver bullet solution, but after monitoring and measuring, certain solutions will make sense in different areas. One of the tools we’ve implemented at several of our company restaurants is metering technologies, so we can identify how water is being used and compare it to water usage in similar locations. In other cases, we’re using landscaping monitors and sensors that identify when it’s raining so the restaurants don’t turn sprinklers on when the ground is wet.” 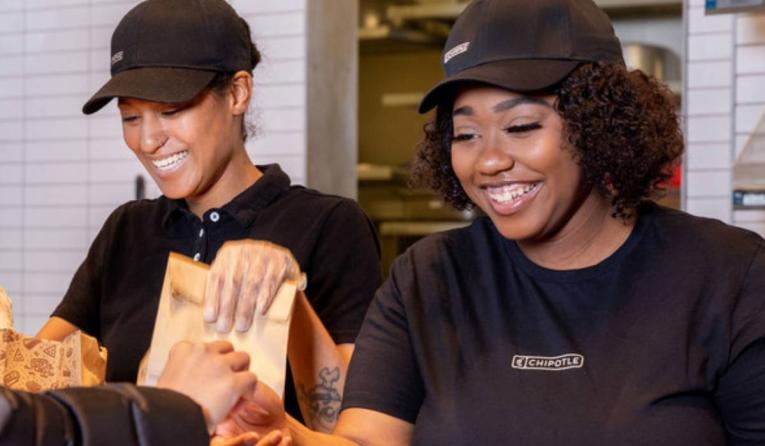 At Chipotle, Schalow notes, “The 2022 annual incentive bonus for our officers can be positively or negatively impacted by up to 15 percent based on the company’s achievement of our ESG goals.”

Incremental, common sense adjustments can add up to sustainability success, but in growth-oriented business models, the organization’s success can further complicate progress toward environmental initiatives. In 2020, Chipotle set a goal to reduce its overall waste 5 percent by 2025.  In 2021, due to the company’s rapid growth, overall waste actually increased by 7.5 percent.

Even restaurant operations with hundreds of stores instead of thousands can have a substantial impact. New York-based Shake Shack, which has 369 restaurants across 32 states and 15 countries, launched a test last year of compostable, plastic-free, and carbon-negative straws. The pilot test, which was conducted in select markets, indicated that a single Shake Shack restaurant reduced carbon emissions by 4,146 metric tons in a single month simply by using the carbon-negative straws, which were sourced from Restore Foodware.

In a similar initiative implemented in fourth quarter 2021, Shake Shack reduced its cardboard usage by more than 1,000 pounds weekly by increasing its burger case pack by 4.5 pounds per case. The company has also begun testing solar panels in five locations, is using LED/motion-sensor lights and energy-efficient equipment in many stores, and is evaluating adding EV charging stations in the future.

There is no single action or answer to positively impact the climate, as Esposito notes, “It’s a combination of different things. One of the things Wendy’s has done is renovate our restaurants to use more energy-efficient equipment, HVAC systems, lighting (most have converted to LED in the parking lot), and building materials. We use a double-sided grill for most of our restaurants, and we’re actually rolling out a new model that is more energy efficient. We’ve also converted to a ware wash machine at several hundred restaurants and these are more energy efficient as well as more water efficient.”

Looking to the future, Wendy’s plan for new construction as well as remodels includes EV stations in the schematic. Although there are only a few EV stations currently in place at Wendy’s stores, it is something that can be incorporated as the use of hybrid and electronic vehicles rises.

The move to corporate responsibility has translated directly into corporate accountability. At both Wendy’s and Chipotle, executive compensation is now tied to the achievement of ESG (environmental, social, and governance) goals.

At Chipotle, Schalow notes, “The 2022 annual incentive bonus for our officers can be positively or negatively impacted by up to 15 percent based on the company’s achievement of our ESG goals.”

And at Wendy’s, Esposito says: “This year, for the first time, 10 percent of the annual incentive compensation for our executive population, which is vice president and above, will be tied to the achievement of ESG goals.”

Key to achieving the goals is employee engagement, and that is an area that she has been most pleased with at Wendy’s: “This is a team sport, it is not something that one person or one department can impact, I’ve been pleased at how much energy there is within our organization for focusing on these initiatives, whether food, or footprint, or people-related. If anything, we have more ideas than we can implement in terms of how to move forward. so that’s really encouraging.”