With Fresh CEO, a New Edible Arrangements Comes to Life

Edible Arrangements is evolving into a concept capable of serving multiple occasions.

Mike Rotondo has a knack for joining brands with devoted followings. His latest, Edible Arrangements, has been a gifting concept of choice for customers for nearly two decades. But what do you do when that focus shifts, and 90 percent customer awareness levels lag the company’s evolution? Well, you hire Mike Rotondo.

In early July, the more than 1,200-unit brand tapped Rotondo, the former chief executive at Tropical Smoothie Café, as its CEO. Tariq Farid served as Edible’s leader since its founding in 1999 in East Haven, Connecticut. Over the last few years, Edible has looked to transition from a strict gifting focus into a gifting and treats brand, launching items such as Dipped Fruit, Froyo Fruit Blends, and Smoothies as part of its “Edible Treats,” lineup.

“I knew I could bring to them more of that [quick-service restaurant] and customer interaction, store-traffic type of discipline,” says Rotondo, who joined Tropical Smoothie as VP of operations in 2008. He was promoted to COO in 2011 and CEO the following July.

Rotondo believes there’s unique opportunity at hand with Edible. It’s hard to find a densely populated market in America where a trip to work doesn’t involve passing an Edible or two. Historically, though, customers weren’t picking up the phone or stopping by unless there was a particular reason—Valentine’s Day, Mother’s Day, and so on. For a snapshot, some of Edible’s operators typically see sales increases of more than 3,000 percent on Valentine’s Day. This past February 14, the chain delivered more than 1.2 million strawberries, 268,000 pieces of pineapple, 66,000 pounds of grapes, and 260,000 bunches of kale.

Edible wants to evolve the conversation. And Rotondo says he was brought in to figure out how.

"I’ve closely followed Mike’s career over the past decade at Tropical Smoothie, and when the time came to bring in a CEO, I knew he would be perfect for the role,” Farid said in an earlier statement, adding he would now focus on growing Edible Brands, the concept’s parent company, in a role that includes technology, supply chain, and other businesses, as well as the Edible Arrangements brand. "This is an exciting time at Edible and I am confident that Mike’s deep experience in [quick service] and gifting will bring our vision of the new Edible to life.”

Rotondo worked at Baskin-Robbins through high school and college, and joined Wendy’s as an assistant manager before working his way up to district manager. He clocked time at HoneyBaked Ham and Arby's, and arrived at Tropical Smoothie following a similar role at Great Wraps. He brings to Edible quite a track record from Tropical Smoothie, especially in regards to franchising success.

This past year, the smoothie brand said its top 50 percent of franchise owners had average gross sales north of $873,254—a 30 percent increase over the last four years. Same-store sales are up a whopping 36 percent over the past five, and more than 345 units have opened, bringing the total to about 650. At $681,000, he also left Tropical Smoothie operators with the highest systemwide average-unit volume in the company’s 21-year history.

To capture the turnaround, Tropical Smoothie’s comp sales were down about 6 percent in 2008—the year Rotondo came on board. They fell another 2 percent in 2009, with AUVs just around $400,000. The year he was appointed CEO, BIP Capital invested in Tropical Smoothie. By 2015, same-store sales were up 11.2 percent, year-over-year, and the brand signed 199 franchise agreements. It inked 100 in 2017.

Rotondo says in the first six months at Edible, his No. 1 task will be “getting the franchisees aligned with the vision of the brand.” 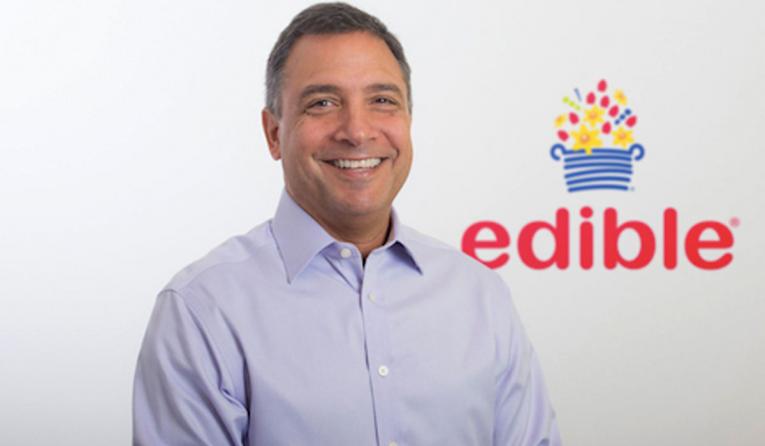 “We want everybody engaged on what the marching orders are moving forward,” he says. “How do we all get rowing the boat in the same direction?”

Edible wants customers to think of the brand as a day-to-day treat option. Not just when they want a special-occasion item on a special day, like a cake, but when they want something fresh, too. On its Edible Treats menu are products like Fresh Fruit Salad; Pineapple & Mango Froyo Fruit Parfait; a Chocolate Dipped Strawberries Cone; Strawberry, Apple & Banana Treat Box; Mango, Pineapple, Banana Smoothie; doughnuts; and more.

Edible is working on a new prototype, Rotondo says, designed to court more in-store traffic. The design is expected to launch before the end of the year. Edible is also working with data-analytics platform Buxton to understand the “roadmap and what this future footprint of Edible looks like.” The brand will need to target new real estate to make this model work.

“In the past, an Edible model, where it was mostly delivery and mostly arrangements, the location was important, but you needed to be in a good, densely populated area,” Rotondo says. “You needed to be in good zip codes in terms of all of the business you could potentially get. Doesn’t necessarily mean it had to be a great retail location. Whereas now, how we’re moving forward, we’re looking for those retail locations in the strip centers, good visibility. Main and Main, that type of stuff. That’s going to be difficult because we’re going to be battling with a lot of other concepts for those locations.” 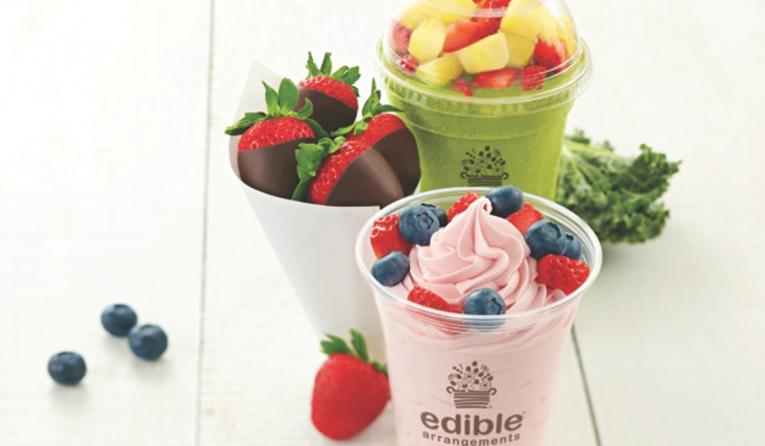 In the next 2–3 years, Rotondo says there’s “easily another 100 locations” that Edible could target in new areas, new territories, where the concept would succeed.

As far as the operations go, Rotondo says the majority of franchisees he’s chatted with are interested in the new approach, regardless of the changes needed—they want more traffic in their locations. He said the new focus has minimal impact on the labor model, since the products are mostly extensions of Edible’s previous offerings. It’s not like the brand added chicken wings. The biggest change is being more upfront about the snacking aspect of its business, and figuring out how to move that to the forefront of the operation. How Edible lays out those products is another factor the prototype plans to address, Rotondo says.

Throughout the process, Edible has leaned on data. “It starts with us really understanding who our customer is and where they’re going, and why they use us, and how we can communicate to them more effectively,” Rotondo says. “How can we talk to them, where and how are they consuming information? That’s the kind of data we need. It’s all of that business intelligence that we start with. And we have a lot of that.”

Naturally, Rotondo has been asked why he made the move to Edible. There were a few reasons, he says. Firstly, he feels, as the aforementioned numbers attest, Tropical Smoothie was in a great place and had a team ready to “keep on cranking.” Next, Rotondo says he was a huge customer of Edible of years and connected with the consumer sentiment. “When I was telling people that I was looking at this opportunity, as I told family and friends, every time you mention Edible people just get a smile on their face. So for me to have the opportunity to be a part of leading a lovable, iconic, such a well-branded company—that was a dream come true for me,” he says.

“I’ve said this a couple of times, not to sound corny, but I’m here because I’m supposed to be here. That’s really how I look at it,” Rotondo adds.