Rebranding a Restaurant in the Modern Age

Rebranding is common in the foodservice industry, but it’s also a difficult process—made more intricate by tech—that requires operators to know the ins and outs of their concepts.
Restaurant Operations | January 2020 | Blake Weaver

Digital technology has significantly changed every aspect of life; from placing video calls to curating a presence on social media to ordering food via smartphone apps, life has gone digital.

The process of rebranding restaurants has been transformed by the rapidly evolving digital landscape. Indeed, as companies return to the drawing board and revamp their brands, technology is a crucial part of the conversation. Websites, mobile applications, and social media presences are all important parts of the business model today, and as operators undergo a rebrand, they need to explore its implications on each of these channels.

“Everyone thinks about a brand, and they think of a logo,” says Soung Wiser, creative director and principal at General Design Company. “It’s so much more than that.”

While the intention behind rebranding has stayed consistent—the goal is to modernize and invite new customers to the brand experience—the execution of the rebrand is evolving. Wiser says companies no longer just have to think about how their refreshed look and feel play out in traditional media, but also how it translates to social media and influencer marketing.

To change or update a brand identity, Wiser says, leadership must first know the ins and outs of the original identity. When her team is researching and designing a restaurant’s rebrand, they analyze every detail of the concept, even down to the look of the uniforms and menus.

Operators should be this attentive in self-rebrands, too, she says. While completely changing a concept is drastic, most companies can alter the brand successfully just by tweaking some of the details, both digital and analog.

Cousins Subs, a Wisconsin-based sandwich chain with more than 100 locations, recently experienced the intricate process of rebranding, which included modern store remodels. A major focus of the Cousins rebrand was bringing the concept up-to-scratch digitally as customers become more tech-focused than ever before.

“We are always innovating. We look at the latest technology and determine if it is a fit for our brand,” says Cousins CEO Christine Specht.

Other important updates to a brand can include graphics and design; revamping interiors, fixtures, and accessories like the menu; giving exteriors and signage a facelift; and refreshing websites and social media channels. 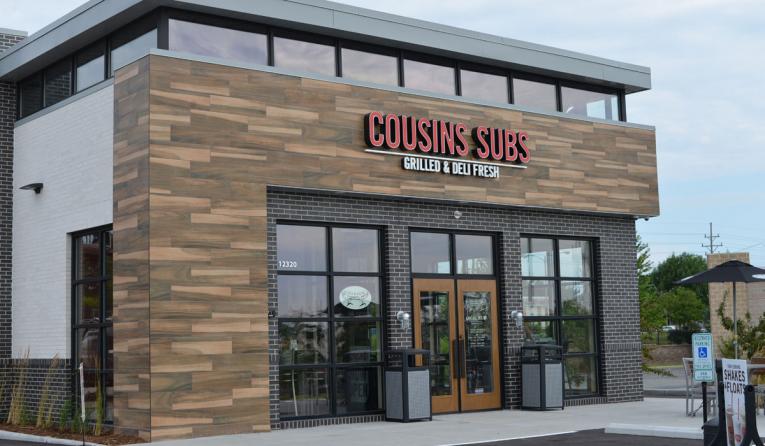 Cousins Subs has more than 100 locations.

Noodles World Kitchen’s vice president of marketing Jonathan Tress says the brand went through rebranding for the last two years to change from a company that was dated and more serious to something more energetic and colorful. That included a name change from Noodles & Company.

“We really took a step back and said, ‘Where do we want the brand to go? How can we bring that to life?’” he says.

Aside from modernizing the graphics and updating the fonts and colors, his team discussed where the brand came from, especially taking into consideration the shift from a significant majority of customers dining onsite 25 years ago to more than half of the restaurant’s customers eating off premises.

The team also simplified the ordering processes on the app and website, making them quicker and more accurate so that the whole process would be easier on the guest. Tress says these online changes necessitated physical changes, as well, such as the new rapid pickup stations that facilitate online ordering.

“All of those things that have always been around have now become much more important as props, so there’s more attention being paid to how we do this in a way that’s more clever or delightful than smacking a logo on top of it,” she says.

Leaders from Noodles and Cousins both believe that one of rebranding’s biggest challenges is making it work across an entire system. With more than 450 Noodles World Kitchen locations, bringing the whole chain up to speed was difficult. Tress says achieving consistency across all locations was difficult, as was ensuring that the online rebranding was successful across all channels.

As another operation with dozens of units, Cousins Subs  faced challenges with franchisee buy-in while rolling out changes to a mostly franchised system. “We realized it was a big commitment to ask franchisees to remodel their restaurant, often after paying off their loan from the original build-out,” she says. “We wanted to be transparent and open in our communication. We clearly detailed the expectations to ensure there were few surprises.”

She says other leaders in similar positions should involve the franchise community and other stakeholders early in the process, and that transparency and honesty with partners are critical to a rebrand’s success.

“This goes hand-in-hand with listening to their comments and feedback and taking action to incorporate their ideas into the larger plan as applicable,” she says.

Of course, the first hurdle to clear when rebranding is locating a clear reason for doing so. Wiser says teams should ask themselves two questions before jumping into a rebrand: Are the numbers inadequate even when the company markets to a wide audience? And is the brand’s story being told properly?

“The digital age is the tool that allows people to find inspiration, but it’s also the thing that can be very distracting,” she says.