Why Subway Isn't Failing, According to Subway

Subway's Fresh Forward design is mandatory for all new locations and store remodels.

Recent news about the world’s largest restaurant chain has been anything but uplifting: Subway’s sales are in decline. Traffic is thinning. And stores are shuttering across the country.

But president and CEO Suzanne Greco portrays Subway’s recent trials as a relatively short-term setback in the longer arc of the brand’s history, which now spans more than half a century. For sure, change is brewing. However, Greco believes comprehensive brand realignment will position Subway to remain relevant in the ever-competitive restaurant market for decades to come.

“Yes, we’ve contracted a little bit. But it’s a very small percent. It’s less than 4 percent. In the U.S., we still have a significant number of restaurants,” she says. “We’re in the middle of a brand transformation where we have evaluated and are transforming every consumer touch point.”

Greco says “everything is being revisited,” including store locations, store designs, and the company’s technology offerings. Yet, Subway won’t budget on its original concept. Her brother, Subway co-founder Fred DeLuca, sought to offer a tasty, affordable and nutritious fast food offering when he launched the company in 1965. And Greco believes that brand proposition remains as relevant as ever.

In fact, much of the competition in quick-serve and fast-casual dining has replicated Subway’s open kitchen design over the years. Many have tried to match the chain’s endless options for customization. And many quick-service and fast-casual chains have sought to play in the fresh and healthy food space as consumer tastes have evolved.

“I think consumers today are still looking for fresh, nutritious, affordable, delicious sandwiches that are customizable. I don’t think that proposition is going anywhere. It’s all about where we’re providing it,” Greco says. “Subway needs to take a step back, which we’re doing, reevaluate all those consumer touch points and make sure we’re bringing them [up] to today’s consumer standards, what they’re looking for. That means we’re innovating and we have to change.”

Change is always difficult, Greco says. And that’s particularly true for a massive company with more than 44,000 restaurants that serve 7.5 million customers per day.

“This is a big ship to turn. But we’re really excited about it. We’re excited about the success of the future,” she says. “The world is changing faster than ever before and we have to be very nimble.”

Subway has survived difficult periods in the past, Greco says. And any of the nation’s biggest quick-service brands that have been around for 50 years have also experienced periods of turbulence, Greco says.

“All of them have gone through difficult times. That’s what business is about,” she says. “As a 50-year-old band, what we’re doing isn’t unusual.”

‘Our customers are rooting for us’

Subway’s domestic store count dropped by some 900 stores in 2017. While that number might dwarf the entire store count of some competitors, it represents less than 4 percent of Subway’s nearly 26,000 American locations.

Now, Subway’s development team is analyzing each individual location with modeling software to help choose the best locations for restaurants going forward. Greco expects store counts to continue shrinking somewhat in 2018, 2019, and 2020 as the brand shutters poor-performing stores and relocates others to more desirable locations, oftentimes in non-traditional settings. In many places, traffic patterns have shifted as cities and towns have changed over the years, Greco says.

The sandwich chain’s most visible change will sweep across the country with the company’s new Fresh Forward design. The new model—mandatory for all new locations and store remodels—features a vivid color palette, updated beverage stations, new ordering kiosks, and digital menu boards. Fresh Forward also highlights the fresh produce used in stores with a vegetable display case behind the sandwich line. The new design is already driving sales and traffic in stores across the country.

“Sometimes, we move a location 100 feet or across the parking lot, and once its remodeled with Fresh Forward, we’re getting some new customers coming in the door getting excited about the new look of Subway,” says Don Fertman, Subway’s chief development officer.

But Fresh Forward is only one change among a suite of innovations underway at Subway.

On January 1, the chain rolled out a $4.99 footlong limited time offer, reminiscent of the $5 footlong special it abandoned in 2016 in favor of a $6 special. The thin margins on the $4.99 deal reportedly rankled some franchisees. Still, 97 percent of Subway’s 10,500 U.S. franchisees are participating in the deal.

Greco says she takes the franchisee concerns seriously. As a totally franchised company, she says “franchisees are the backbone and the heart and soul of Subway.” Owners have plenty of forums to voice complaints and concerns, whether it’s through the company’s strategic advisory council or monthly calls with multi-unit operators.

The CEO saw the $4.99 LTO as an important tool to drive traffic during a particularly slow period of the year for restaurants. While Subway is “not all about discounts,” she noted other quick-service players have rolled out aggressive value offerings, including $5 meals and value menu items at the $1, $2, and $3 price points.

“When you’re dealing with over 10,000 franchisees … if you get 100 complaints it feels like a lot,” she says. “And not that their complaints aren’t valid, but we have to go with what’s best for the majority. That’s the most difficult thing we have to deal with. We can’t make everybody happy, unfortunately.”

Greco notes that many franchisees have expressed contentment and optimism: In Subway surveys, 85 percent of owners report a desire to expand or maintain current store counts. The franchisor is now helping to match owners who want to downsize with those looking to grow.

On February 15, Subway launched “Make It What You Want,” a multi-platform marketing campaign designed to highlight the customization of Subway’s offerings in a more contemporary fashion. It marked a shift in strategy as Subway consolidated its U.S. and Canadian media and creative business with one partner for the first time in more than 25 years.

Collectively, Greco expects the changes to help Subway modernize its approach without radically changing the heart of the concept: “We have loyal customers. Our customers are rooting for us. They love Subway. It’s just providing them what we’ve provided them before but in the way they want it today.”

‘I don’t think Subway’s going anywhere’ Western Oregon Subway franchisee Luke Fortier understands the opposition to the $4.99 footlong promotion: He too was initially turned off by corporate’s roll out of the tight-margin offering. But the franchisor provided data and analytics that showed a tangible increase in traffic and sales, Fortier says. “I was able to look at that and say they’re not just throwing darts. They have data to back this up,” he says. “I’ve seen all the articles, I’ve seen all the upset franchisees. I’ve talked to them. I guess I didn’t have a problem with it.” Fortier, an electrician-turned franchisee, has played an active role in shepherding stores since he got into the business seven years ago. He distributes coupons often and visits with big employers like local hospitals and mills to offer discount cards to their workers. Fortier is vigilant about maintaining clean stores and offering fast and friendly service. He sweats details like the temperature and music in his restaurants. “When things are going good, I look in the mirror and pat myself on the back and when things are going bad, I look in the mirror and say what do we need to do, Luke?” he says. “I think a lot of people like to look in the mirror and pat themselves on the back when things are going good and point fingers when things are going bad.” Fortier says he’s bought some poor-performing stores only to see their sales double. He believes quality managers are what separate the best-performing in his portfolio of 13 stores. Fortier believes brighter days are in store for Subway. He’s eager for the franchisor’s new loyalty program, which he thinks will drive sales in the coffee-centric Pacific Northwest, where many drive-through coffee stands offer popular punch cards. He’s looking to open more stores and he’s excited about adopting the Fresh Forward design with a store he will soon relocate. “I don’t think Subway’s going anywhere. I just bought four new shops last month. I wouldn’t have done that if I was worried” he says. “Subway’s not going anywhere. I think it’s a great brand. I love it. I’m happy I got into it.” 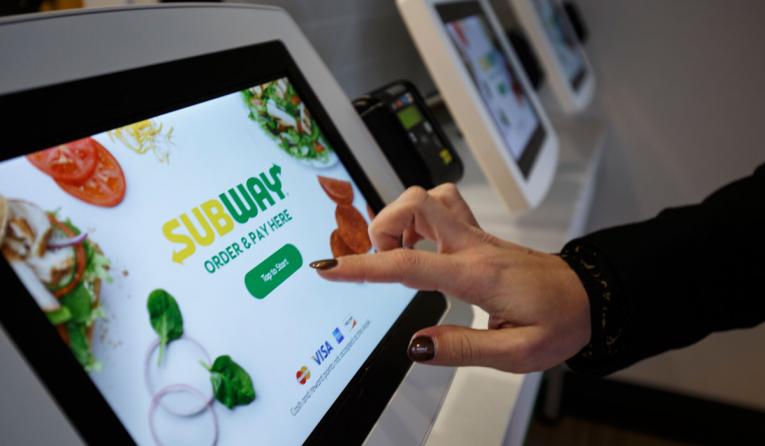 Kiosk are going to play a role in Subway's technology-driven future.
‘As we change, we’re going to turn the corner.’ Brandon Wilhelm’s family has been in the business of Subway for three decades. His parents began by opening a store in Northern Illinois in the late 1980s. They’ve since moved on to become development agents in the region, bringing him into the fold of that business. This year, Wilhelm bought his first restaurant in Loves Park, Illinois, a store his parents owned 30 years ago. Wilhelm, who worked as a “sandwich artist” in high school, has been with the brand since it had just two kinds of bread and no toasters in the stores. Over the years, traffic has declined near some stores as big industrial employers have left the region. So his work as a development agent is primarily focused on finding better locations, not necessarily expanding to new locations. “I’m focused more on relocations these days,” he said. “As traffic patterns have changed over the past 30 years, we want to move where the action is. So, I’m not doing a whole lot of new stores in our area.” Though “it’s been a struggle of late,” he believes the brand is poised for a big comeback. “The brand is making a lot of strides forward as far as improving our technology base and getting our message out in a different way. We may have been a little bit behind in that,” he says. “We’re playing catch-up, but I believe the strength of the brand will eventually get things going in the right direction … As we change, we’re going to turn the corner and get things going in the right direction.” Wilhelm believes in the power of Subway’s investments in technology and loyalty program. He thinks the chain has some catching up to do with mobile ordering. But with its enviable scale and brand awareness, he thinks the brand alignment effort will see quick results. “We’re the biggest player in the sandwich market,” he says. “When you get those things rolling across a brand our size that message will snowball quickly. To say that we're making a change and that might not resonate with people right away. Once it starts rolling across the system, I think we’ll see that message get out very quickly.”