The fast-food giant is teaming up with Ford to turn coffee chaff into car parts. Really.
Sustainability | December 2019 | Danny Klein

McDonald's and Ford found synergy in their sustainability goals.

These are uncharted waters for McDonald’s. That’s not to say there’s a brand anywhere, in America or globally, that would know how to bring awareness to an announcement of this nature. It sounds more like an episode of “Mythbusters”—turning millions of pounds of a waste product into car parts.

“I think sometimes people talk about educating people on sustainability,” says Ian Olson, the senior director of global sustainability at McDonald’s. “But I think of it more as, especially super brands like Ford and McDonald’s, providing aha moments. Like, oh, that’s really cool. I didn’t even think that could be a possibility, and kind of opening their awareness so they can now go on their own sustainability journey to figure out what’s important to them.”

In other terms, McDonald’s hopes to shed light on an issue most people don’t even know exists. And hopefully trigger a movement.

Understandably, the majority of Americans likely aren’t familiar with the term “coffee chaff.” It’s the dried skin of the bean that naturally comes off during roasting. This often turns into garden mulch or charcoal. It’s common to see farmers just light it on fire. And, as you could imagine, there’s millions of pounds of it per year (1.2 million per week in just North America). McDonald’s serves roughly a billion cups of coffee annually—500 million cups a day just in the U.S.

Olson, who has been at McDonald’s for eight years, says a former colleague from Ford called him and said they were looking at ways to turn coffee chaff into something useful. But also, Ford recognized the awareness gap and how collaborative partnerships could educate the greater public. McDonald’s and its 14,000 domestic restaurants was a solid place to start.

Olson says the product came out better than expected. “I think, if anything, we probably ran into an issue of alright, how do we get more people involved?” he says. “How do we get other suppliers involved?”

“Our hope is it’s the beginning," Olson adds. “And we’ll look for different opportunities with Ford and others to figure out how we can turn what would conventionally be seen as waste streams into valuable supply chain materials.” 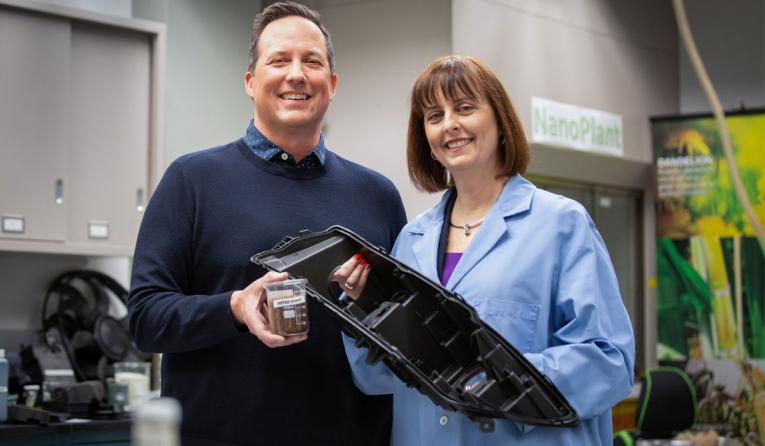 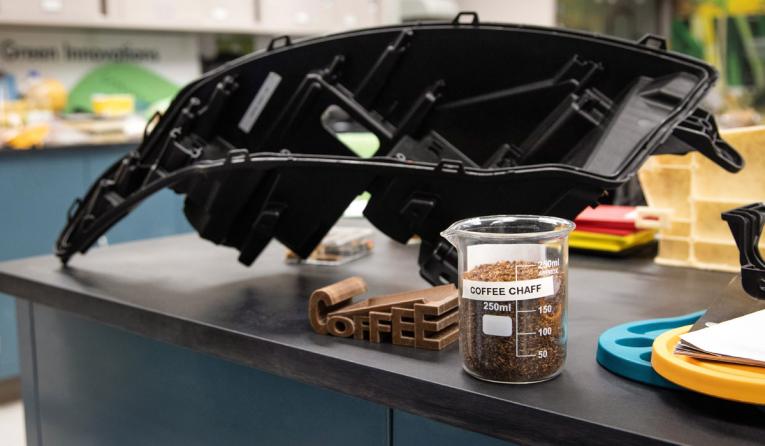 The result, and where it started.

Debbie Mielewski, Ford senior technical leader, sustainability and emerging materials research team, says the partnership started simply. She was drinking a cup of coffee and decided there must be a sustainable opportunity beyond the obvious—looking past just the cup and coffee itself.

Ford realized it could convert the chaff into a durable material by heating it to high temperatures under low oxygen, and then mixing it with plastic and other additives and turning it into pellets. That material could then be formed into various shapes, like headlamp housing and other interior and under-hood components. The result isn’t just a lighter and more sustainable material, but one that also has better heat properties. “That’s super important for a headlamp housing because the lightbulb comes through the housing and it produces a lot of heart right around the plastic,” she says.

Mielewski adds Ford is saving about a pound a vehicle with the parts swap. And that’s by reusing what is considered a waste product.

Naturally, Ford looked at McDonald’s production and its own light bulb went off. A billion cups of coffee equal a whole bunch of chaff, Mielewski says. McDonald’s is now supplying the chaff to biotechnology company Competitive Green Technologies, who processes it for Varroc Lighting Systems, Ford’s supplier of headlamps.

To Olson’s earlier point, Mielewski believes consumers will care about the change once they see it in front of them. “Everybody talks about waste and landfills and ocean plastic, but here’s an example of utilizing materials that are considered waste,” she says. “And so, this really should click in people’s heads that this is a big deal. It’s a big achievement. We can make durable product with something we used to burn in the field.”

To the business angle, she says, companies should want to engage in a circular economy instead of just taking their waste to the landfill. “We’re going to work hard to talk about it’s not just about McDonald’s and Ford,” she says. “It’s about all big industry working together to share these byproducts so that we use less and damage the earth less.”

Olson says partnerships of this nature are key for McDonald’s because it brings together two accessible brands to tell a broader story. It resonates more than McDonald’s simply sending out its own messaging. “How do we engage? And how do we make people feel good about the brand that they’re frequenting and purchasing things from overall?” he says. 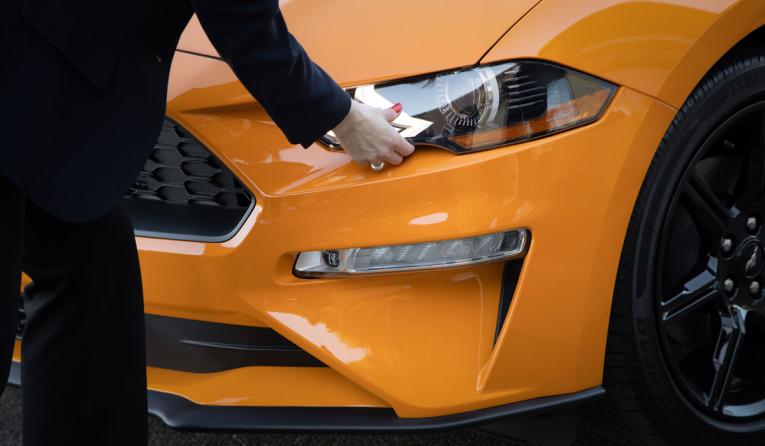 The material stands up better to heat, too. 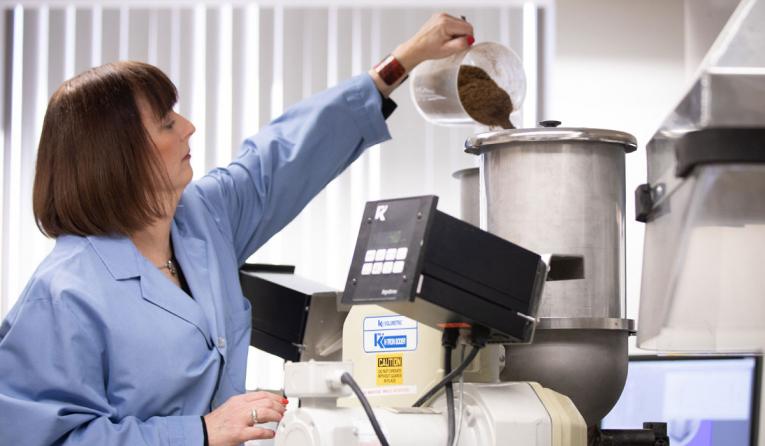 McDonald's serves a billion cups of coffee per year. That's a lot of chaff.

Olson says a lot has changed for McDonald’s in the past eight years on the sustainability front. This isn’t just a feel-good effort anymore. It’s important to customers, shareholders, and employees. It helps with recruitment and community involvement.

“Are we all the way there? No. But we’ve got some really great progress and we’re excited about what the future holds for that,” Olson says. “I think we’ve just been a little bit more thoughtful with saying this is our vision, this is why we believe it’s important. Not only for us to use our scale for good but how we want to partner with others and we can’t do this alone and we’re excited about these offers.”

Here’s an example: In February, the Nex Gen Cup Challenge garnered press for the problem it was trying to solve—create an ultimate disposable paper cup that could be composted and recycled. Some 250 billion fiber cups end up in landfills each year. It also made headlines, though, because it united direct competitors in the fast-food space, including McDonald’s, Starbucks, Wendy’s, and Yum! Brands.

“I don’t think that’s something we would have done, or the industry would have, eight years ago when I started with McDonald’s,” Olson says. “But there’s a lot of excitement around that, inside the company with our owner/operators. Anyone you talk to about it, it’s like gosh, this is really kind of exciting if we can figure out how to do this and crack the code.”

Olson says collaboration is going to unlock how McDonald’s drives true impact in sustainability going forward. And much of that will be unconventional partnerships outside the restaurant arena, like the Ford deal. “It’s just another lens of looking at your existing business or business strategy and finding new opportunities or possibilities that you otherwise wouldn’t have seen,” he says.

Additionally, everyday accomplishments customers can see and touch (headlamps) are critical because they clear one of sustainability’s biggest myths, Olson says. This concept that using sustainable materials requires a sacrifice in quality or somewhere else. “In this case, it’s an enhancement,” he says, referencing the lighter product. “That’s something we really need to get across.” 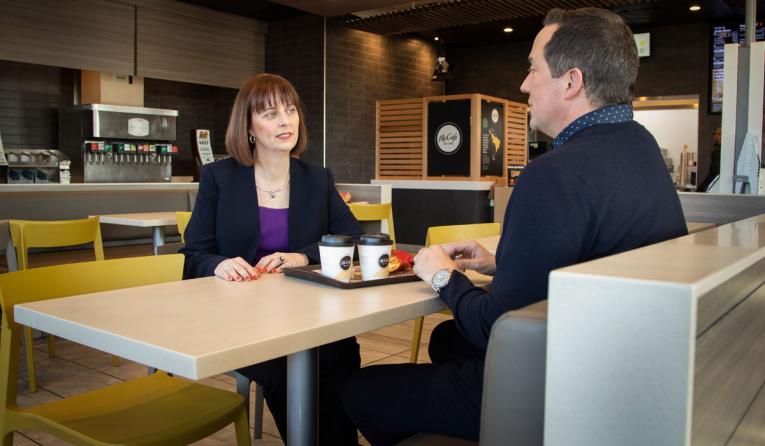 McDonald's believes partnerships outside the restaurant industry could go a long way to raising awareness about sustainability.

McDonald’s has several sustainable and eco-friendly goals it’s working on today. It noted earlier it expects to reduce greenhouse gas emissions related to McDonald’s restaurants and offices by 36 percent by 2030 from a 2015 base year. It also committed to a 31 percent reduction in emissions intensity (per metric ton of food and packaging) across its supply chain by 2030 (also from 2015 levels).

Those actions would prevent 50 million metric tons of C02 equivalents from being released into the atmosphere by 2030—the equivalent of taking 32 million passenger cars off the road for an entire year or planting 3.8 billion trees and growing them for 10 years. Importantly, McDonald’s said, it would enable the company to grow as a business without growing its emissions.

How will the company hit some of these marks? By being innovative and efficient through improvements such as investing in renewable energy, LED lighting, energy efficient kitchen equipment, sustainable packaging, restaurant recycling, and by elevating and supporting sustainable agriculture practices, McDonald’s said.

In 2019, McDonald’s dedicated resources to two renewable energy projects. These came in the form of virtual power purchase agreements located in Texas—firsts for McDonald’s in the U.S. The energy generated will be equivalent to more than 2,500 restaurants-worth of electricity, the company said. Once online, McDonald’s portion of these two renewable energy projects will help to prevent about 700,000 metric tons of CO2e emissions each year, which is equivalent to planting 11 million trees or taking over 140,000 cars off the road.

Energy efficiency improvements have also been a part of McDonald’s restaurant sustainability efforts for a while, such as through kitchen equipment, lighting, and building and site design.

In the supply chain, McDonald’s asks its vendors (55 last year) to report to CDP Climate Change and Forests, including 100 percent of its globally managed beef, chicken, dairy and cheese suppliers and the suppliers making up the majority of the company’s fiber-based packaging.