This month last year, First Lady Michelle Obama stood before a crowd of activists, journalists, government leaders, celebrities, and kids gathered in the State Dining Room of the White House to announce a campaign that will ultimately define her—and part of her husband’s—time in Washington, D.C. The announced campaign, christened “Let’s Move!,” would pour as much as $1 billion of federal money over the next decade into reversing the growing epidemic of childhood obesity.

“It’s time for a moment of truth for our country; it’s time we all had a wakeup call,” Obama said at the launch. “Our kids don’t choose to make food products with tons of sugar and sodium in super-sized portions, and then to have those products marketed to them everywhere they turn. And no matter how much they beg for pizza, fries, and candy, ultimately, they are not, and should not, be the ones calling the shots at dinnertime. We’re in charge. We make these decisions.”

One year later, “Let’s Move!” has several celebrity chefs, school districts, and legislators among its supporters. Its leaders have passed legislation through Congress that will bring healthier food to schools across the country and convinced food manufacturers to commit to removing 1.5 trillion calories from their products by 2015.

But one industry remains largely on the outside of the “Let’s Move!” campaign looking in: the quick-service industry.

“We’re looking for leadership from quick-serve restaurants,” says Sam Kass, the senior policy advisor for healthy food initiatives at the White House. “I have no doubt that we’ll see that in the coming months. But there’s no question that we’re really going to need folks in the industry to step up and help us get this initiative where it needs to be.”

If Kass believes industry action is needed to boost “Let’s Move!,” then industry heads should turn. Kass, the Obamas’ private White House chef who was No. 3 on Food & Wine Magazine’s “40 Big Food Thinkers 40 and Under” list in November, is the First Lady’s right-hand man for “Let’s Move!” initiatives.

“There’s no question that we’re really going to need folks in the quick-serve industry to step up and help us get this initiative where it needs to be.”

While Kass credits the restaurant industry as a whole for its efforts to support childhood nutrition—“they realize that there’s a lot more to do, and people are taking this seriously,” he says—the big change he and the First Lady hope to achieve will take more long-term efforts. “You cannot change this overnight because the American palate is used to eating what we’re eating,” Kass says. “So we know that changes have to occur within that context.”

The goal of the campaign is to “solve” childhood obesity within one generation, which, according to a May 2010 report to the President, would reduce the obesity rate in children to 5 percent by 2030. That figure is currently at about 33 percent, making today’s youth the first generation to have a shorter life expectancy than their parents.

“We know it’s going to take time,” Kass says. “There’s no question we’ve got to take a long view if we’re going to have real change that’s going to be lasting.”

Much of the campaign is unrelated to the quick-service industry, instead focusing on schools and nutrition education to lead to the vast majority of the change. “We know that there’s nobody raising their kids but parents, and parents have the responsibility to make decisions that are best for their kids,” Kass says.

But with one-third of all calories consumed by Americans coming from outside the home, Obama and Co. know the importance of involving quick serves and the rest of the restaurant industry, especially when it comes to accessing healthy foods at affordable price points.

In fact, it’s the quick-serve industry that often gets blamed for childhood obesity rates, with critics saying chains restrict access to healthy foods for families. Examples of fast food kids’ meals loaded with too much sodium, saturated fat, empty calories, and other unhealthy nutrients are often their evidence.

“There’s been a lot of finger pointing trying to place blame on the cause of this problem,” Kass says. “The First Lady has made very clear that this is not about blame, that she has created a space where anybody who is serious about coming to the table with solutions that we know will have a measurable, lasting, and sustainable impact on the health of kids … have a place here.”

The National Restaurant Association (NRA) has already taken its place at the table. The association is active with the “Let’s Move!” campaign, working with contract foodservice members on the “HealthierUS School Challenge,” in which school lunch providers like Aramark and Sodexo commit to increasing nutritious foods and doubling the amount of produce in school lunches. The NRA also works with the “Chefs Move to Schools” program, in which it pairs schools with chefs who can help educate and develop new school menus.

As of press time, an NRA-backed program that would give restaurants incentives for offering healthier kids’ meals was also in its infancy.

“As an industry, we’re concerned about the health of children in this country,” says Joan McGlockton, vice president of industry affairs and food policy for the NRA. “We aim to please our customers, to the extent that our customers are looking for healthier meals. We’re very consumer-focused, and we’ll try to deliver on that.”

In September, the First Lady spoke at an NRA board meeting to further encourage the industry’s involvement in her efforts to lower obesity rates. In her speech, she referenced that research shows that families eat less-healthy foods when they eat out.

“The choices you make determine what’s listed on the menus, what’s advertised on billboards, and what’s served on our plates,” Obama told a crowd of press and restaurant leaders. “And your decisions about how a dish is prepared, what goes into it, and where it is placed on the menu, that can have a real impact on the way people eat.”

Obama told restaurateurs to “rethink the food” they offer and substitute healthier ingredients in menu staples. She also encouraged operators to put healthier options in more prominent places on menuboards, and to make offerings like apple slices or carrots the default kids’ side, rather than french fries.

“You’ve got to get really creative to attract kids,” Coco says. “You can’t just put an apple in front of them and say, ‘Hey, this is good for you.’ Creativity in kids’ menus is something we’re looking at. When you’re fighting salt and fat in the taste buds, you better bring something better than a plain old apple.”

Kass says there is some “low-hanging fruit” that quick serves can take advantage of in their restaurants to gradually improve childhood nutrition.

“As a chef, I know that if I were to take out half of the sugar and half of the salt in what I cook tonight, just like that, I might be looking for another job,” he says. “If over time I take out 5 percent of salt or 5 percent of sugar over the next five years, each year, nobody will know the difference, and I’ll be able to keep my job.”

Many quick serves have already taken steps to improve the nutrition of their kids’ offerings. Burger King added BK Fresh Apple Fries to its kids’ menu and restricts the nutrition of its BK Kids Meals to meet USDA recommendations. McDonald’s rolled out Happy Meal Choices in 2004, which offers healthier items like Apple Dippers and 1 percent milk with its signature kids’ meal. And Wendy’s added mandarin oranges as an option on its kids’ menu.

In addition to industry leaders, nearly two-thirds of all quick-service operators surveyed by the NRA said they offered more nutritious kids’ options than they did two years ago. And on the NRA’s “What’s Hot in 2011” survey, nutritious kids’ dishes were the No. 4 menu trend of the year, while children’s nutrition was No. 6 and fruits and vegetables as kids’ side items was No. 18.

Eat’n Park, a Pittsburgh-based quick serve, looked beyond its menu in its efforts to support the “Let’s Move!” campaign when it launched its LifeSmiles program in November. In conjunction with the campaign’s four main goals, the concept is offering healthier kids’ options in its stores; sponsoring physical-activity events; pairing with chefs to educate kids within schools; and working with a local food bank to help offer more fresh produce.

“We’re not saying, ‘We’re only going to offer healthy foods,’ and I think that’s where we, as part of the four pillars, are empowering parents and kids with healthy choices,” says Brooks Broadhurst, senior vice president of food and beverage for Eat’n Park Hospitality Group. “Providing people with choices and educating people about what is healthy food and how to stay focused on your diet, that’s about what we can do.”

Indeed, the quick-serve industry still operates under the “consumers choose” business model, and less-healthy hamburgers, french fries, and chicken tenders remain on kids’ menus. “I think that largely, consumer demand is going to drive the change,” McGlockton says. “Unfortunately, we’ve offered healthier items in the past and people haven’t eaten them.”

Coco made waves in the industry when he removed trans fats, high fructose corn syrup, and MSG from the Jason’s Deli menu a few years ago. While he agrees consumers deserve the right to choose what to eat, he says that the heavy emphasis companies put on unhealthy items like burgers and fries is dangerous.

“I believe in balance, but I do believe in transparency,” Coco says. “It’s not fair to the consumer to advertise this stuff without letting the public know what it’s going to do to them and what’s in it. I think we’ve got imbalance.”

Kass—who “applauds” the quick-serve industry for supporting the new menu-labeling mandate—says the industry has more sway than it admits in getting consumers, especially kids, to eat healthy food.

“There’s no question that the quick-serve industry responds to what consumers want, but there’s also no question that the industry helps shape that demand as well,” Kass says. “They know exactly how they can influence sales and what’s being bought, and I think there’s absolutely a role for using the power of marketing that they have to help consumers make different choices.”

Kass says even though the industry has yet to significantly participate in the “Let’s Move!” campaign, only time will tell when everyone across the country will recognize the need to fight childhood obesity.

“We don’t have forever, but we’re continuing to work and hope that in the near term, not in the long term, we have people who really start to step up and make a commitment,” he says. “If we start to get that momentum, particularly within the quick-serve restaurants, we’re going to accomplish all of the things that we need to accomplish.” 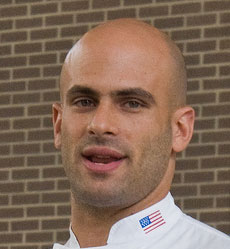 How much interest is there from restaurants in “Let’s Move!”?

“I know for a fact that restaurants are working hard to figure out all of the things that they can do to improve their menu and their offerings. The First Lady knows that it’s going to take incremental change over a long period of time to get what we’re serving to be the best that we know it can be with the frame of kids and families. It’s not just a kids’ menu, it’s what a family eats when they come into a restaurant because kids are not eating outside the context of their family.”

How much of a responsibility do quick serves have in serving healthy foods to kids?

“We know that there’s nobody raising their kids but parents, and parents have the responsibility to make decisions that are best for their kids. But there’s no question that restaurants, and quick-serve restaurants specifically, have the responsibility of giving parents the greatest opportunity that they can to make the best choices that they can.”

How important is it for quick serves to be involved in “Let’s Move!”?