Are Restaurants Getting an Unfair Shake with COVID Spikes?

The National Restaurant Association believes the industry has been hurt by inaccurate reports.

The National Restaurant Association wants to set the record straight. In recent weeks and months, it explained Monday in a letter to the National Governors Association and the U.S. Conference of Mayors, inaccurate information has dotted media coverage, social conversations, and statements from some public officials. The prevailing theme: Restaurants are not doing their part to slow COVID-19.

“The U.S. restaurant industry is historically highly regulated, which enables restaurants to work quickly and constructively with local and state regulators to enact new customer and employee safety protocols and to work with federal officials to adopt best practices like the new Centers for Disease Control restaurant considerations,” said Lawrence Lunch, SVP, science and industry at the Association.

And there have been anecdotes aplenty, like the Jacksonville Beach restaurant in hot-bed state Florida, where 16 friends went out to celebrate a birthday, and, days later, all 16 tested positive for COVID-19.

Earlier in the month, Sense360 explored the connection as well. 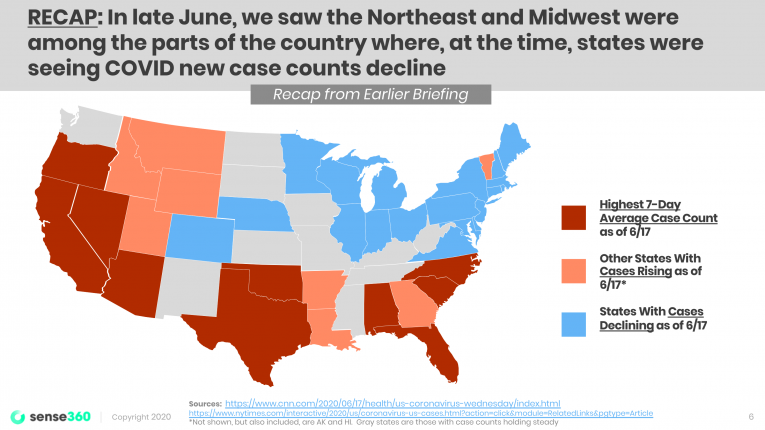 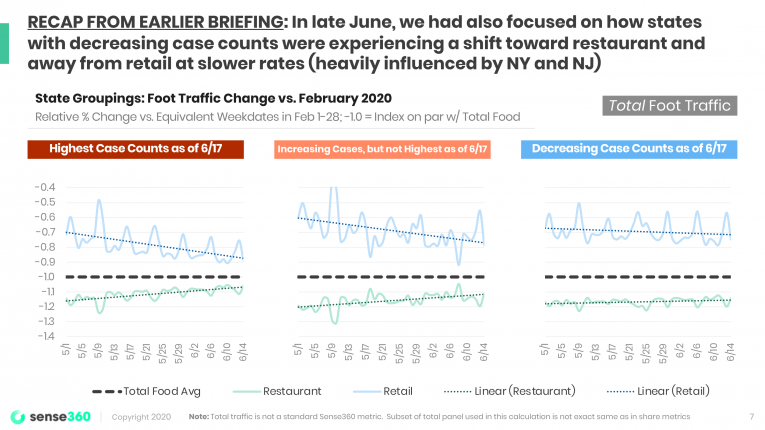 These graphs below illustrate the main point. It's important to note bars are included in the data set along with restaurants. 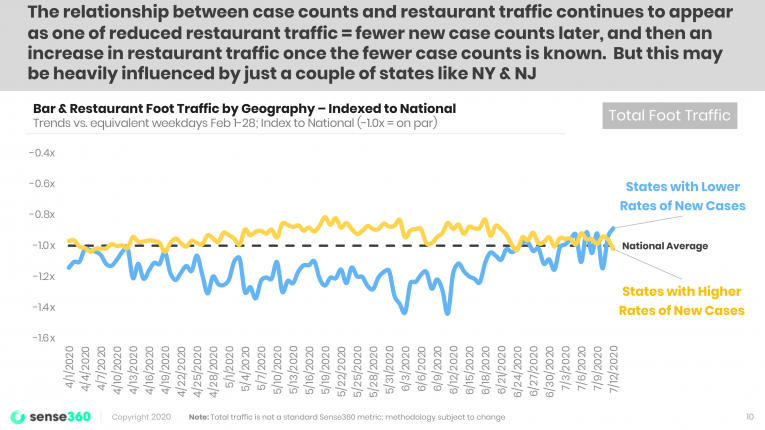 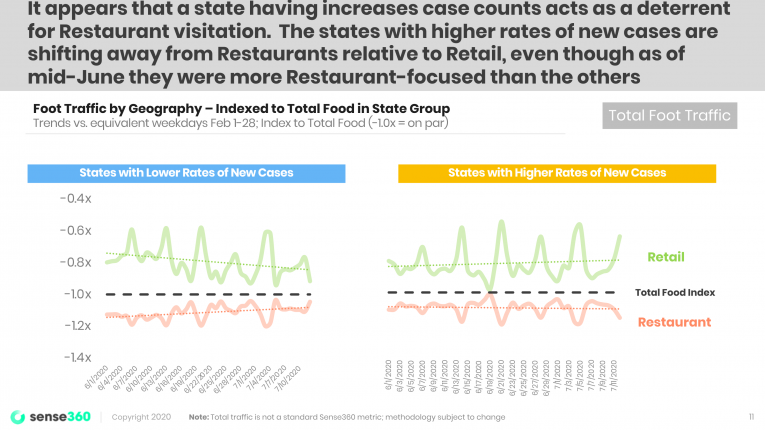 But regarding this line of thought, the Association said in June (to the CNBC story), “It is irresponsible to pin the rise on a single industry.”

In other terms, the correlation should be re-framed as reopened economies equal higher cases, from multiple industries, not just restaurants.

“Throughout this public health crisis, the National Restaurant Association has been focused on making the latest and most important scientific information about the novel coronavirus and the latest best practices for operation during the pandemic easily available to the industry,” Lynch said in a statement. “Our owners, operators, and employees truly believe that we are all in this together and share an unwavering commitment to customer and employee safety.”

Naturally, this point is hard to gauge on a broad scale. Industry tracker Black Box Intelligence polled nearly 300 restaurant operators during its Q3 State of the Industry Webinar update on July 16.

When states began to think about reemerging this spring, the Association said it worked with the FDA, academia, Conference for Food Protection, public health officials, and industry representatives on a Restaurant Reopening Guide that it offers at no cost.

WHAT TO DO IF YOUR EMPLOYEE TESTS POSITIVE

Lynch took issue with a specific “non-peer reviewed paper,” that asserts COVID-19 could have spread in a crowded restaurant in China. Here’s the study in question. The abstract was: “During January 26–February 10, 2020, an outbreak of 2019 novel coronavirus disease in an air-conditioned restaurant in Guangzhou, China, involved three family clusters. The airflow direction was consistent with droplet transmission.”

“This incident happened early in the spread of the novel coronavirus and before U.S. restaurants began following current safety protocols and distancing requirements,” Lynch said. “The paper cannot and should not be used as a reliable scientific model. In fact, the model was never reproduced and relies on customer density and seating patterns not currently allowable in any U.S. restaurant. The ongoing comparisons between a single restaurant in China to America’s restaurant industry, seeped in a legacy of food handling safety, has had a negative impact on U.S. restaurants, our employees, and has hindered our path toward recovery.”

Lynch pointed out a particular section in the paper to QSR that read, “Our study has limitations. We did not conduct an experimental study simulating the airborne transmission route. We also did not perform serologic studies of swab sample–negative asymptomatic family members and other diners to estimate risk for infection.”

So while the study said it concludes “that in this outbreak [where 10 people got sick in a restaurants of 83], droplet transmission was prompted by air-conditioned ventilation,” there are obvious gray areas.

On the other side of the debate, The Washington Post wrote May 28 that U.S. restaurants were, in fact, made safer because of the expensive high-capacity air conditioning systems widely used in domestic commercial and public builds, in contrast to the small, inexpensive systems common in China.

Lynch had a firm stance on masks, too, noting, “The National Restaurant Association, our state restaurant association partners and industry leaders have made clear that government COVID-19 protocols such as public mask requirements are effective and must be followed, and that restaurants that violate safety and health laws should not remain open.”

Sean Kennedy, EVP of public affairs at the Association, added restaurants are getting pummeled by the current re-lockdown environment and discussion that’s trailed it.

The Association has reiterated for weeks that the restaurant industry has lost more jobs and revenue than any other sector due to COVID-19 shutdowns and economic fallout. And it’s poised to be among the slowest to recover without direct and curated Federal aid.

During the height of stay-at-home orders, restaurants shed two-thirds of all jobs and, from March to June, lost more than $145 billion in revenue.

And just as the recovery started to progress alongside dine-in reopenings, nearly 100,00 locations were forced to shutter again, “by state or local mandate putting people out of work and costing owners thousands in lost reopening investments,” Lynch said.

Kennedy explained the challenge in straight-lined terms: “The fewer people we can serve, the more money we lose, and the less likely it is that the cornerstone restaurant in a community survives,” he said.

Outside of what it’s potentially done to consumer sentiment, COVID-19 case surges and subsequent rollbacks have stalled the industry’s financial comeback. The NPD Group said Monday restaurant chain customer transaction declines have tracked between negative 11 and 14 percent (year-over-year) since the second week of June. This after steady improvements in declines from the last week in April to the point.

In the week ending July 19, transactions decreased 12 percent versus 2019 levels, compared to negative 14 percent in the prior week, NPD reported.

Overall, there hasn't been any improvement in restaurant transaction declines for six weeks.

In the most recent period, 78 percent of restaurants were in geographies that allowed some form of on-premises dining. California, which banned indoor dining statewide July 13, boasts 13 percent of the nation’s restaurant units. The backtrack struck a serious blow to the industry’s trajectory.

Just three weeks ago, the estimated percentage of restaurants allowed to serve dine-in guests was at 90 percent, per NPD’s restaurant census, ReCount.

Countless restaurants are also operating well below normal capacities in terms of menu offerings and store hours, the company noted, which are operator decisions made partly due to the pandemic situation overall and partly due to the difficulty in attracting labor.

“I believe there is still a lot of upside recovery for restaurants, but for now we’re stuck in neutral until we can get the industry operating at full capacity,” David Portalatin, NPD food industry adviser and author of Eating Patterns in America, said in a statement. “The ‘recovery’ phase will then tell us whether the industry can recapture enough customer traffic to get back to the pre-COVID baseline, or whether the new normal will reflect a re-set where consumers prepare more meals in their home kitchens for a longer term.”

This past week, quick-service restaurant chains witnessed transactions dip 11 percent, year-over-year. Full-service brands fell 27 percent. The latter number reflects a widespread pivot to off-premises, but it also illustrates the uncertain number of temporary, or permanent, closures. In earlier measures, the field was larger and loaded with brands that have either chosen not to, or failed to, make the switch. Yelp said last week there have been 26,160 total restaurant shutterings since the arrival of COVID-19, an increase of 2,179 from June 15. Of those closed, 15,770 permanently shut down, or 60 percent.

“Certainly, full-service restaurants need to recover their lost on-premises business since that will always be their main source of volume,” Portalatin said. “But, I wouldn’t be surprised to see new casual dining models emerge that are designed to optimize off-premises capabilities for the long-term.”

As the number of COVID-19 cases rise and new capacity restrictions are implemented at the regional level, the percentage of dine-in sales have decreased. In the period, 61 percent of full-service restaurant sales came via dine in, by Black Box’s report. It increased steadily until reaching a high of 64 percent two weeks ago.

“In addition to some guests likely being more cautious and avoiding dining out in response to the rising health concerns, full-service restaurants seem to have also hit a ceiling in terms of percentage of their restaurants that are open for dine-in business,” the company said.

After a steady climb since the end of April, the percentage of restaurants existing in the pre-COVID-19 era now open for dine-in plateaued around 87 percent for the last three weeks, according to Black Box.

It’s been a different story for many quick-service chains, which, like McDonald’s corporate last week, have decided to err on the side of caution and keep dining rooms closed. This, as much as anything, is a matter of performance, potential, and accessibility. In June, McDonald’s said 95 percent of its restaurants globally were open, serving off-premises business via drive thru, delivery, and/or take-away with a limited menu. Only 100 or so were shuttered domestically due to unique sites, like malls.

The chain’s U.S. same-store sales declined 19.2 percent in April but just 5.1 percent in May.

Simply, a lot of quick-serves can weather the storm without dine-in at this point in the consumer COVID-19 journey. The same isn’t true for many full-serves, especially independents.

By the week ending July 12, only 71 percent of limited-service restaurants had their dining rooms open, Black Box said.

And as dine-in sales slowed again in recent days, off-premises growth picked up for full-service chains. It was sliding parallel to reopenings, but has now reversed in the last three weeks. Quick-serves, however, have reported off-premises sales growth, year-over-year, at an increasingly higher pace since mid-April.

NPD said digital orders increased from 5 percent in January to 13 percent in June—down 2 percentage points from May. Delivery in June made up 7 percent of traffic versus 3 percent in January. In an environment in which total industry traffic fell by 14 percent, traffic levels more than doubled at the delivery occasion and digital occasion versus year-ago levels.

The divergence in performance puts a clear emphasis on the message the Association alluded to. CEO Tom Bene said earlier in an interview with QSR that most restaurants could not survive on 50 percent capacity, and lifelines like outdoor dining and to-go kits, etc., were temporary bridges for an issue truly tied to duration and regulation.

“Closing restaurants a second time puts dangerous strain on an industry that is struggling to stay afloat,” Kennedy said Monday. “Restaurants do not open and close as easily as flipping an on/off switch. Making modifications for social distancing, purchasing PPE, training staff on new safety protocols, and stocking kitchens for increased service all add to a restaurant’s bottom line.”