New Restaurants are Starting to Open in the Pandemic

The rate of openings is returning to pre-COVID-19 levels.

A lot of discussions have been held and predictions shared when it comes to restaurant closures and COVID-19. And, generally, talk of expansion and openings is framed against a post-pandemic backdrop—a world where big chains get bigger and well-capitalized brands flood the real estate left behind.

But what about present growth? One potential byproduct of pandemic conditions is that it stirs entrepreneurial spirit. Franchisors are banking on this. People want to take control of their destiny in a time defined by what they can't do. Perhaps someone was let-go from their job and wants to get in business for themselves. Or maybe those same lowered barriers for entry can pave the way for an individual with a restaurant dream who needed a push.

“Restaurants and food businesses, an industry hit hard by the pandemic, have seen a significant number of brand-new business openings amid the increased challenges,” Yelp said. “These openings and reopenings have been sustained by focusing on health and safety, as well as new approaches to serve their customers, including moving their services and patrons outdoors.”

Essentially, there’s a rising number of entrepreneurs opening up restaurants at this juncture in the crisis, at a higher rate than one might expect given the setbacks.

Yelp’s data indicated the number of restaurant and food-based business openings are increasingly more in line with 2018 and 2019 volumes (Yelp determines openings by counting new businesses listed on its platform).

The types of restaurants dotting the COVID landscape have changed, however. There aren’t many elaborate fine-dining interiors popping up, Yelp noted. Rather pandemic-optimized venues appear to be the eatery of the future—concepts with some combination of features like large patios, spaced-out tables, order-ahead menus, and efficient-service cuisine.

Compared to this time last year, Yelp observed an increase in new openings nationally for open-air food services, such as farmers markets (211 openings) and food trucks (1,734). Additionally, pop-up restaurants (100) and seafood markets (84) experienced a jump in openings, year-over-year, “catering to consumers' interests in novel ways to dine and shop for food outside of traditional restaurant experiences,” Yelp said.

Keep in mind, however, this is running counter to heightened closures. In September, Yelp’s Economic Impact Report showed 32,109 closures as of August 31, with 19,590 of those listed as permanent, or 61 percent. The National Restaurant Association has predicted 100,000 could shutter in 2020.

This chart below from Yelp illustrates the company’s sentiment—that opening rates have returned to pre-COVID days. 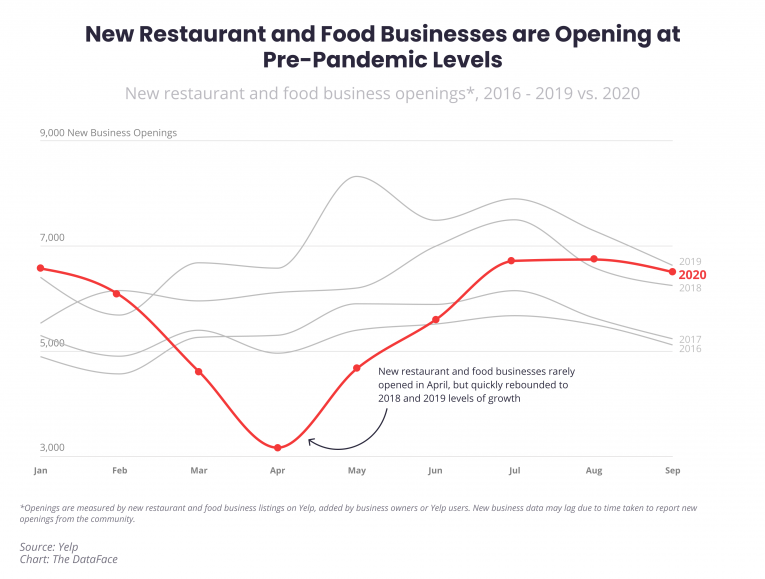 States that showed the most resilient Q3 for restaurant and food-related business openings included North Dakota (39 openings), Washington D.C. (108), Rhode Island (69), New Hampshire (103), and Wyoming (34)—all with at least twice the openings compared to the previous quarter. States with the largest total number of new openings tended to be larger and heavily populated, including California (3,279), Texas (2,002), Florida (1,542), New York (1,420), and Washington (561). 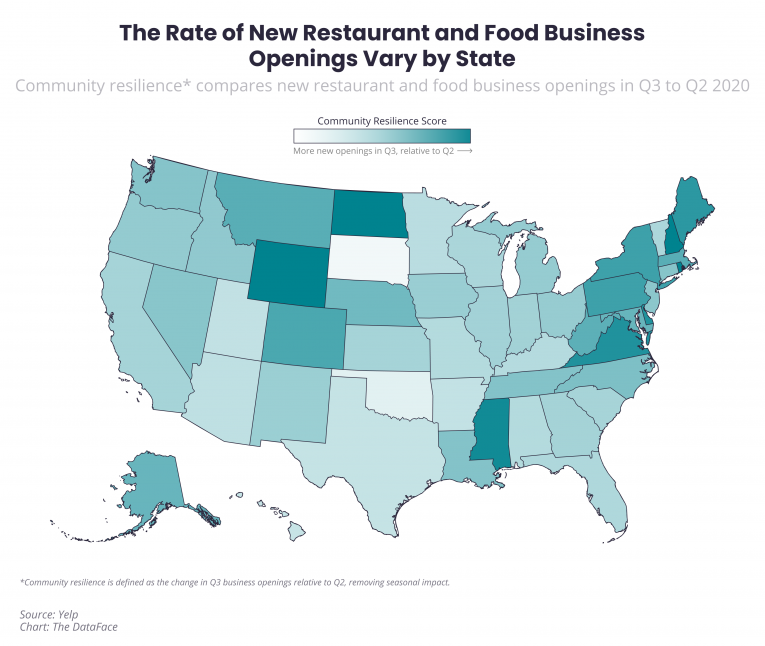 Outdoor dining continues to serve as a powerful lifeline for restaurants. Throughout Q2, Yelp recorded an increase in review mentions for words related to eating out while sheltering in place or quarantining. Things like contactless (up 7,839 percent, year-over-year. Did guests talk about this before?); curbside (6,405 percent); takeout (475 percent); pickup (261 percent); and delivery (164 percent).

In Q3, though, review mentions decreased for takeout, delivery, and pickup. While still well above pre-pandemic baselines, Yelp believes the drop-off was tied to customers transitioning to safely eating outdoors while social distancing.

Outdoor dining, in fact, was one of the biggest trends of the summer. This past quarter, the share of U.S. restaurant reviews mentioning “outdoor dining” was more than double the share in Q3 2019. And the share of U.S. restaurant searches suing the “outdoor seating” filter on Yelp skyrocketed more than five times prior-year levels. At the same time, review mentions for “street dining” leapt five times between Q2 and Q3 of 2020.

Overall reopenings (not just restaurants) are on the rise, too. Yelp said more than 210,000 small businesses have returned to operations after extended temporary closures (between March 1 and September 30). Yelp analyzed reopening trends by comparing the change in reopenings month-over-month. 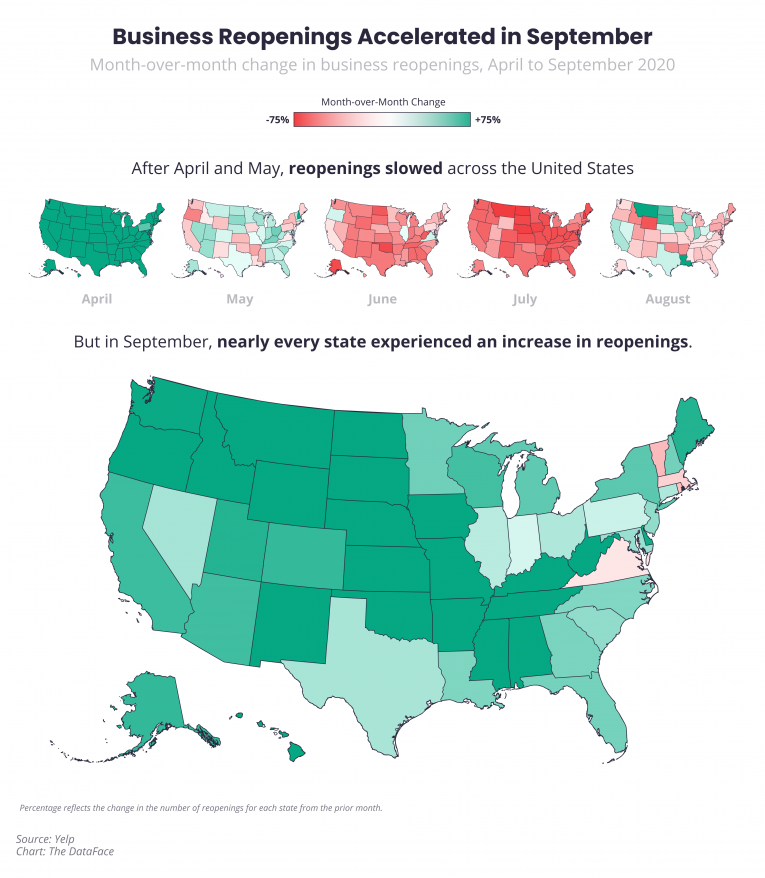 This proves what restaurants have seen of late—consumer demand isn’t dictating traffic or reopenings as much as mandates are. Typically, once a restaurant is allowed to reopen, people come back in some fashion.

To the earlier point, reopening trends reflected government guidelines with many smaller, Midwest and Southern cities experiencing less restrictive regulations than Coastal counterparts. Florida opened all businesses at 50 percent capacity as early as June 5, whereas cities such as New York City and Los Angeles only reached the later stages in September. Many businesses were still not operating at more than 25 percent capacity as of October, Yelp said.

The only areas that increased reopenings from May to June were Washington, D.C. (40 percent increase) and Philadelphia (19 percent). The latter shortly after endured a 53 percent decrease in reopenings from June to July. It reopened at 50 percent capacity during May and June, but walked back to 25 percent were cases surged. Once more, this proves where the levers are being pulled—by officials, not consumers.

For instance, June and July reopenings slowed as additional case waves spread. But case-containment responses due to early summer spikes resulted in fresh momentum in August and September.

“While the average rate of reopenings have slowed overall since the initial reopenings phase in April and May, Yelp data shows businesses are continuing to reopen, particularly in September, as business owners adapt to changing local regulations and fluctuating COVID-19 infection rates,” the company said.