The State of Restaurants: Demand, Price, and a Race for Loyalty

Consumer Trends | September 19, 2022 | Danny Klein
Adobe Stock
While restaurants project roughly 20 percent of guests will cut spending due to rising inflation, they assess the same number are looking to get more value out of their dining expenditures.

Costs are rising and getting passed along to consumers. Recent surveys show a race to value, with a split forming between experiential brands and those that deliver on convenience. Spun differently, guests aren’t necessarily spending less when they dine out; but there is evidence to suggest they’re doing so less often. Or at the least, being more deliberate in why and when they choose to do so.

If that’s the state of the restaurant guest, where does the operator stand? Rewards Network sent a survey to more than 1,000 restaurants varying in revenue and cuisine type to take the temperature of today's climate. The company also leveraged data on the overall sales of restaurant customers to conduct a same-store sales analysis for foot traffic and average ticket amount on thousands of restaurants.

Let’s get into some results:

Although 51 percent of restaurants said staffing was their biggest concern, less than 4 percent felt diners were visiting less frequently because of this.

Fifty-four percent expect customers to resume pre-pandemic dining frequency or to be dining out more often when the COVID dust clears.

While restaurants project roughly 20 percent of guests will cut spending due to rising inflation, they assess the same number are looking to get more value out of their dining expenditures.

Twenty percent of restaurants without a loyalty program said it would be harder to compete as more big brands develop them post-pandemic.

Ninety-one percent of restaurants said they’ve increased their prices since 2020, with the majority of customers understanding/accepting/not complaining thus far (which doesn’t mean they’re not switching up where/how often they dine out). And a full 88 percent of operators said they have a neutral or positive outlook for the year ahead.

Loyalty programs flashed throughout the survey. “Restaurants owners who don’t offer any type of loyalty/rewards are realizing the importance of incorporating these programs in order to complete with other local restaurants,” the company says.

“The restaurant industry is certainly not monolithic, but our read on the overall survey results are that Americans remain loyal customers, eager to dine-out in spite of the well-known struggles of the economy and labor market, but that they also expect to earn value for their loyalty,” says James Roedding, Rewards Network's chief marketing officer. “Rewards programs writ large are giving people reason to continue spending on hospitality, especially as it becomes easier to earn a return on that investment.”

According to a recent data pull from arrival platform Bluedot, two in three customers said they were downloading restaurant apps or loyalty programs to find deals and freebies. When asked what the best way to locate coupons or discounts were these days, 51 percent picked “restaurant apps.”

“We live in a really interconnected economy and customers are increasingly expecting a level of flexibility that goes beyond a one-to-one interaction,” Roedding adds. “Yes, it’s nice to earn points for a ‘free’ coffee or dessert on your next visit, but it’s a much more valuable return if that dining spend helps to pay for your next family vacation.”

But is overall sentiment settling in? Black Box Intelligence’s Consumer Confidence Index reported an uptick in August following three consecutive monthly declines. It credited the upswing to a drop in gas prices coupled with positive short-term outlook for income, business, and the labor market.

Per Black Box, industry same-store sales were 5.3 percent for the month—the strongest figure since March and a solid jump of 4.6 percentage points of July’s growth rate. Black Box had reported consistent declines with July inching up 0.7 percent, which marked the lowest figure in over a year. Industry traffic declined 1.9 percent in August (3.2 percentage point better than July).

Even with numbers headed in the right direction, traffic has declined six consecutive months, suggesting larger check growth—thanks to price increases—is doing most of the heavy lifting at this stage.

And to the labor point, as of July, the typical restaurant location within limited-service, was, on average, operating with one fewer non-management employee compared to 2019, according to Black Box. In full service, the gap was wider at four fewer front-of-house, non-management employees, and a just over one back-of-the-house worker.

Black Box’s 2022 Total Rewards Survey noted only 5 percent of restaurant companies said they were fully staffed for restaurant hourly front-of-house employees during the first six months of the year. For somewhat understaffed, it was 73 percent, and 23 percent stated they were constantly “very understaffed” for these positions during the same stretch.

Ten percent of companies said they were “regularly fully staffed” during the first six months of 2022 and one in three claimed to be constantly very understaffed for critical operations positions. Fifty-six percent declared being somewhat understaffed.

Into the same-store sales analysis

Come August 2022, restaurant sales had recovered to 17 percent higher than 2019 levels, according to Rewards Network. Just like Black Box data, price was largely the culprit, with the metric driven by 26 percent higher average ticket and a 7 percent reduction in foot traffic. In regard to the latter, Rewards Network found restaurants were open about a day less than before (negative 4 percent) as operators continue to adjust operating hours in light of staffing setbacks.

The company also noted 3 percent fewer tickets when a restaurant was open—a result tied to a combination of inflation and a change in consumer behavior since the onset of COVID. 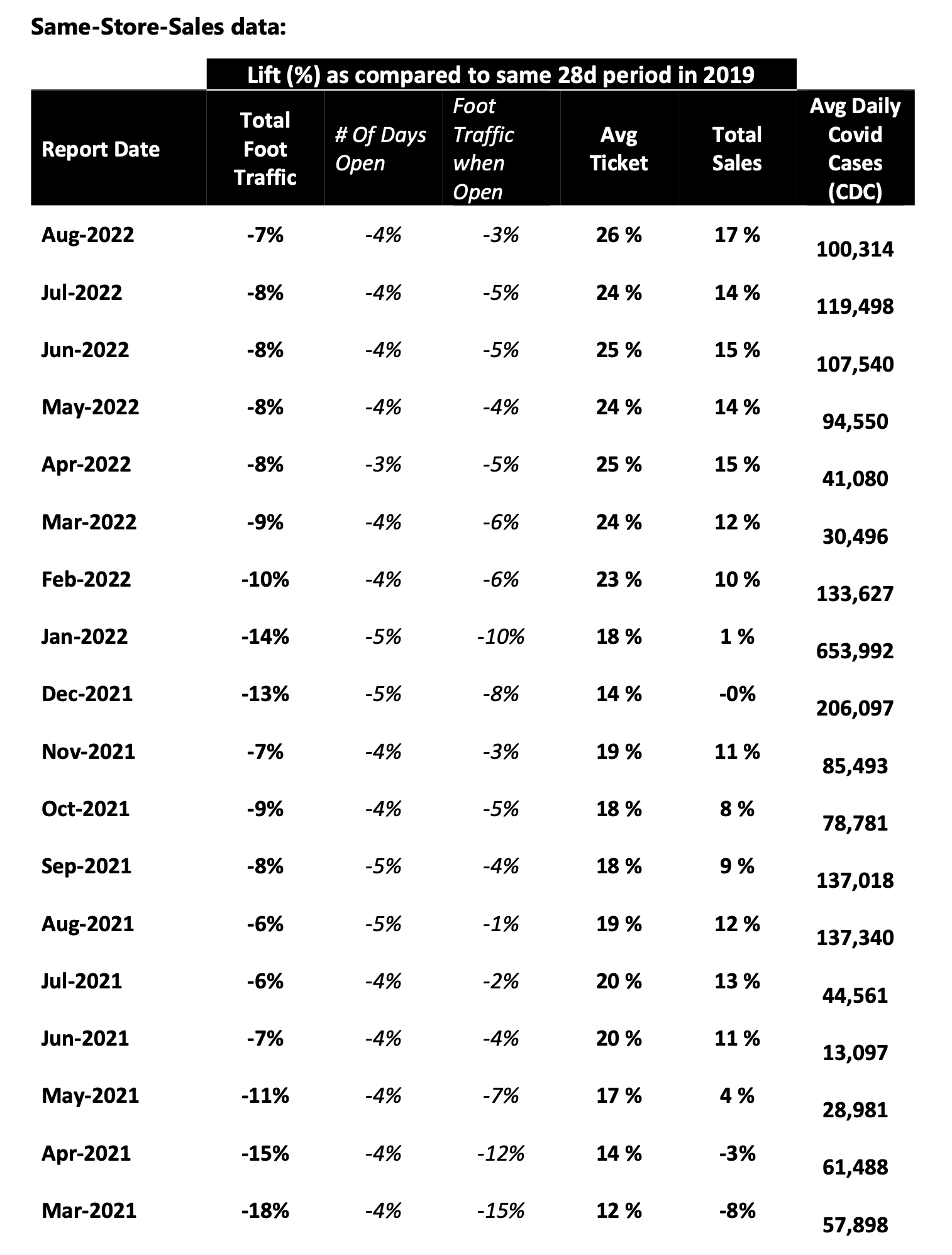 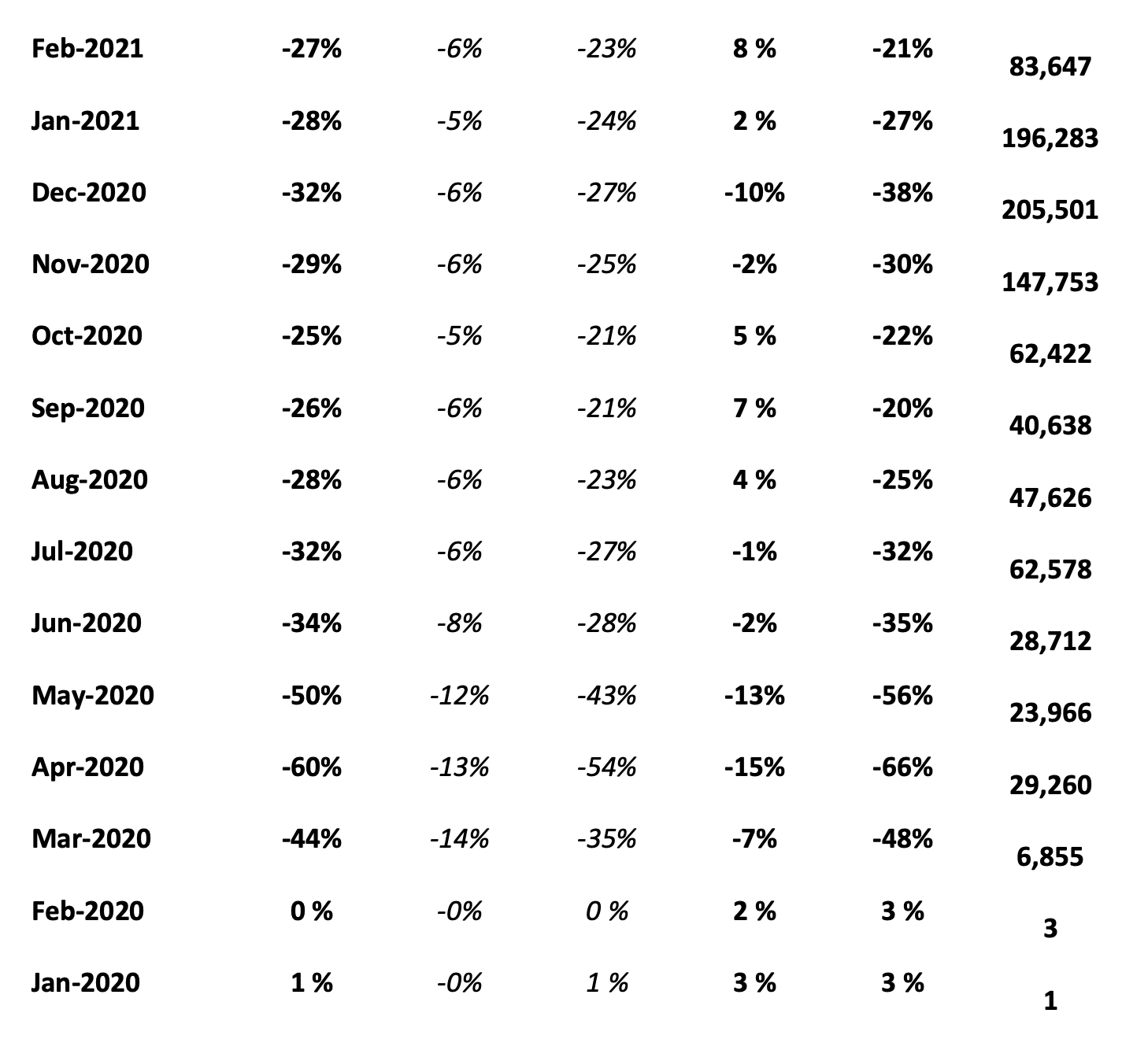 The pandemic is still influencing foot traffic, albeit to a much lesser extent.

In early 2020, foot traffic hit its lowest point at 60 percent below pre-virus levels. It recovered to negative 25 percent by October 2020 before falling back to negative 32 percent due to a spike in outbreaks throughout the winter. Last year saw traffic recover quickly as restrictions were removed across the U.S. and hit a high of negative 6 percent in July 2021.

A rise of cases in the fall thanks to the Delta variant led to a slide of negative 9 percent by October 2021. Omicron drove traffic back down to negative 14 percent in May 2022.

But since, traffic has run at negative 8 percent even as COVID cases doubled in May 2022. In August, traffic improved to negative 7 percent while case counts remained steady.

Essentially, case numbers aren’t correlating as closely with consumer behavior as once reported.

Meanwhile, ticket inflation keeps growing. Inflation grew the most in early 2021, changing from up 2 percent in January to a high of 20 percent in June–August 2021. This same timeframe had the highest foot traffic since the onset of the pandemic.

Inflation lifted from 18 percent in January 2022 to 26 percent in August.

Quick-service restaurants with tickets under $20 boasted the highest foot traffic and overall sales until pandemic restrictions lifted in early 2021. Then, restaurants with higher average tickets and those associated with sit-down dining, outpaced quick-serves in sales and foot traffic (more room to climb off the bottom).

Restaurants in heavily populated cities have consistently seen less than 10 percent lower sales versus those in more sparsely populated towns. The decrease in sales, Rewards Network says, is mainly caused by a reduction in foot traffic and only slightly by a rise in ticket inflation.

Breaking down the data

These following questions were posed to restaurants by Rewards Network.

What are the greatest challenges facing business now (on a 1 to 6 scale, with 1 being the top challenge)?

How would you generally describe the spending habits of your current customers?

What is the most important driver of your business success?

Which statement best describes how the pandemic has changed your opinion of rewards/loyalty programs?

Rank the benefits of a loyalty program:

Competitive advantage to other local restaurants

What would you say is the consumer demand for dining out now, as compared to before the pandemic?

Have you raised menu prices in response to rising costs and/or lower consumer demand caused by COVID?

How have customers responded to higher prices?

What is your outlook for your business over the next six months?

A point on off-premises

There’s no real mystery around whether business outside the four walls of restaurants is higher than 2020. Beyond the consumer adoption side, the sheer size of the field has ballooned as survival tactics turned into something more lasting. So how are consumer habits following the trend? Q2 2022 net sentiment for off-premises dining, according to Black Box, was negative across all segments.

For sit-down brands, guests mentioned “food” as often in both on- and off-premises channels, with a substantial dip in average star rating. On-premises food scored 4. It was 2.9 for delivery/takeout.

Other factors contributing to this turn showed in the words guests used across reviews, like “cold.” Black Box found the term in 8 percent of mentions for full-services off-premises business. On-premise frequency of the word “cold” was more reasonable at 3 percent.

Time-related ticks such as “wait,” were mentioned in 25 percent of full-service off-premises reviews and “minutes” in 19 percent of them. The percentage of on-premise reviews that included these terms was considerably lower, Black Box said. When segmented into delivery, curbside pickup, and takeout, the data was clear and actionable, the company added. Reviews mention “wait” and “minutes” far less frequently for delivery orders. For full service, “wait” was brought up 26 percent of the time for takeout orders, 32 percent for curbside pickup, but only 19 percent for delivery.

“One interesting, but counterintuitive finding in the sentiment data this month: although actual wait times were longer for delivery, customers appear to have more patience,” the company says. “The explanation lies in guest expectations. When it comes to delivery, guests are primed to expect a wait time and are not required to manage their own travel time for takeout/pickup. When ordering takeout, for example, customers expect the order to be ready upon arrival. Restaurants that can better manage expectations and execute on them are likely to see their off-premises reviews improve.”