In the Race for Talent, Could Older Workers Save Restaurants?

Job growth appears likely to slow into the next decade. It might be time to start thinking outside the box.
Employee Management | December 2019 | Danny Klein

An an age diverse workforce might just be the answer operators are looking for.

Going out on a limb, this probably won’t be the last trends story before 2020 arrives. This predictive gamble has so many angles. But that’s the restaurant industry, isn’t it? It’s nothing if not chaotic.

Ask any operator, though, in any corner of the business, all sizes, names, and histories inclusive, what’s keeping the bedroom light on long into the night, and labor won’t be far down the list. We know the stats: Unemployment of 3.5 percent—the lowest jobless rate since 1969. Roughly 308,700 restaurant jobs added over the past year.

That job-seeker’s market has disrupted the cyclical turnover restaurants historically face. In 2018, the turnover rate in the restaurants-and-accommodations sector rose to a post-recession high of 74.9 percent. It was the fourth straight year topping 70 percent, according to data from the Bureau of Labor Statistics. From 2015–2017, the rate for just restaurants averaged 81.9 percent. For comparison, it stood at 48.9 percent last year for all private sector workers.

However, most quick-service operators peg that a soft figure. It’s probably closer to 130 percent on average. Panera Bread CFO Michael Bufano said in July it was 130 percent. Casual-dining giant Darden referenced their segment average at 120 percent. At Chipotle, for hourly staff (crew, kitchen manager, service manager), it clocked 144.9 percent in 2018. The year before, 158 percent.

As the decade flips over January 1, it’s worth considering not just the factors fueling today’s dynamic—gig economy, life-balance benefits, more recognition and engagement initiatives—but who will actually work in restaurants when the dust settles. Ten years ago, according to the BLS, only 13 percent of the population was 65 and older. By 2020, it will be 17 percent. Jump forward another 10 years and it should sit at 21 percent.

Meanwhile, one of the restaurant industry’s most-targeted labor groups, for as long as fast food has been an essential part of America’s fabric—25 and under, and 25–44—will decline a full percentage point, from 31 to 30 percent, and 27 to 26 percent, respectively.

Teens once outnumbered adults aged 55 years or older in the industry 3 to 1, per the National Restaurant Association. It’s now 2 to 1. And that older demographic rose by a significant 70 percent between 2007–2018.

So, although it remains critical to chase Gen Z and millennial workers, it might be time to start thinking outside this familiar labor bubble.

Earlier in the year, the BLS named the 55-plus population as the fastest growing segment of the workforce. By 2024, it will represent nearly 25 percent of the civilian workforce.

Why is this such a big deal for restaurants? Firstly, Americans are living longer. But more and more are starting to work part time to supplement retirement savings.

In the next 12 years, the BLS predicts that employees 65 and older will be at a record high with 16.1 million of them in the workforce, with teenage employees at the lowest since 1963 (5.1 million).

Here’s a quote from Ron Painter, president of the National Association of Workforce Boards from April: “People all over the country are facing challenges that are driving them back into the workforce and we need to connect them with employers that provide respect, dignity, and opportunities for advancement and connection.”

McDonald’s collaborated with the AARP and AARP Foundation in 2019 to identify and connect with mature workers. This included job postings on AARP’s board and a pilot program to ensure jobs are a match for the company. The latter leveraged AARP Foundation’s Senior Community Service Employment Program and BACK TO WORK 50+ workforce development programs. McDonald’s said the process helped franchisees “hire a multi-generational workforce for their restaurants allowing older Americans access to the educational and career benefits available to McDonald’s employees as they re-enter the workforce.” The pilot kicked off in five states—Florida, Illinois, Indiana, Missouri, and North Carolina—before rolling out nationwide.

"We know that employees and employers across all industries succeed when they remain committed in words and in action to hiring and maintaining an age diverse workforce. Integrating these workers with their younger staff can often bring unexpected benefits including two-way mentoring which supports growth for all. Our work with McDonald’s is a true first-of-its-kind for the [quick-service restaurant] industry and we hope others follow,” Susan Weinstock, AARP vice president for financial resilience, said in a statement at the time.

Without making a case for one generation or the other as far as quality of work goes, here’s another reason to consider age diversification.

If tight workforce expansion suggests a negatively growing economy, as it often does, it’s going to become increasingly difficult for restaurants to provide higher wages and hours to employees. Yet those are the exact things required to attract the next generation of talent. 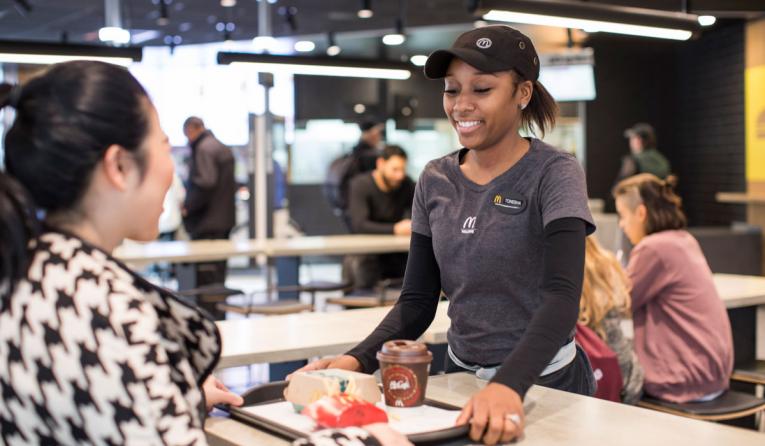 The answer then might be more part-time employees and workers less concerned with the internal career ladder. In the next 12 years, the BLS predicts that employees 65 and older will be at a record high with 16.1 million of them in the workforce, with teenage employees at the lowest since 1963 (5.1 million).

And no prediction about labor would be complete without considering an often-ridiculed element of the discussion: The National Restaurant Association’s Delphi panel expects to see an overall decrease in the average number of employees per unit.

That’s mounted as wage rates push higher and higher. Automation and other tech-enabled systems that remove labor hours are critical factors. It’s one of the top counter-points put up by restaurants as to why raising minimum wage is a risky proposition at the federal level. There’s so much state-by-state variety. And, in many cases, if you have to pay people more, restaurants will just hire fewer employees.

Brands are already preparing for this (kiosks, smaller restaurants, etc.), although nobody likes to come out and billboard that directive. Yes, those types of changes, like mobile ordering, improve guest experience, but they also prepare restaurants for an impending wage reality they might need be able to afford. Think video menuboards, training through smartphones, machines instead of people in the supply chain (barcodes on cases), computerized cooking equipment. Any innovation that lowers the amount of employees needed to run a restaurant.

As of July 1, 2019, the U.S. Department of Labor reported 30 states with minimum wage requirements higher than the federal per-hour standard of $7.25. It’s pretty much an iron-clad fact that, by 2030, the group of states on this list will rise.

In 2018, economists from Miami and Trinity Universities used Congressional Budget Office methodology to measure the effect a $15 federal minimum wage might have on the workforce. They found, if implemented in 2020, it would reduce employment by roughly two million jobs.

Raising the minimum wage would also disproportionately impact entry-level positions where unemployment rates are the highest.

That last point is one restaurants tend to take a highlighter to. Willie Degel, restaurateur and host of the old Food Network series, Restaurant Stakeout, told FSR earlier that when front-of-the-house employees were moved to $7.50 from $5 in his markets, the 50 percent increase took a swift $350,000 out of his picket. If you added in the other minimum wage increases, he was looking at $500,000. So, they eliminated the bus boy position, for starters.

Let’s center that first figure: More than six out of every 10 restaurants reduced hours for workers. And yet brands are being asked to win the retention battle, too?

It speaks again to what could be stirring—restaurants dipping more and more into the part-time pool for help. And older employees might just be a great place to start as younger workers ride the gig- and opportunity-driven wave.

College feels like an inevitable rite of passage. Just think about it this way: How many people 10 years from now will say, “I’m the first person in my family to go to college?” They look for employment beyond entry level they day they get their degrees. And before that, more individuals are focusing on extra-curricular activities in high school today than trying to line their pockets with spending money.

That’s not to say younger workers should be ignored. According to the BLS, 55 percent of 16- to 24-year-olds were employed as of July 2018. Hospitality (including foodservice) amassed the largest portion of teen and young adult workers at 26 percent. It’s still a critical group to target, but is it headed in the other direction for restaurants?

If you stretch back nearly 13 years, there were 1.7 million teenagers working in restaurants. Last year? It was essentially the same, per BLS data. This as the total number of restaurants boomed close to 16 percent. 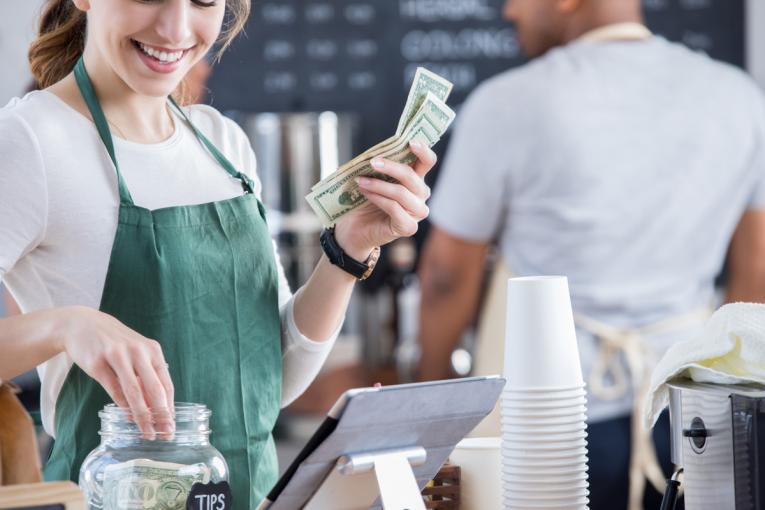 Younger workers remain a critical part of the foodservice industry. That won't change.

That’s a good- and bad-case scenario stat. It means the number of restaurant employees between the ages of 16–19 are back to pre-2007 levels, before the Great Recession. Yet more pressing, the labor force participation of this restaurant-favored segment has stagnated going on four years.

What helped it bounce back previously was the retail correction, and ensuing jobs it vacated. Restaurants pulled from this industry as big-box companies nationwide shuttered stores. The pay scales were similar and so were the hours, qualifications to entry, etc.

Now that retail has readjusted, though, the labor migration settled. Leaving restaurants where exactly? Data shows 41.3 percent of teens held a job in 2007. Last year, it was 35.1 percent. The BLS also estimates the number of teenagers in the labor force will drop by 600,000 in the 10-year period leading up to 2026.

Also per the BLS, as of September 2019, the U.S. was in the longest uninterrupted streak of job growth on record, tracing back on a consecutive 108 months of increase.

But the reality is it’s inching along, not surging. This decade is on pace to be the second-weakest for job expansion since the 1930s.

As that slows into the next decade, restaurants are going to have an even tighter labor pool to battle for workers in.

GJ Hart, the CEO at Torchy’s Tacos, put the challenge into focus. “In 2020,” he said, “I think attracting and retaining talent will continue to be a focus. This could be through things like education benefits or other innovative programs, such as our managing partners program, which allows managers to run their own locations.”

Defining a compelling employee-value proposition is going to separate restaurants in the coming years, as it has for some time. But so will fostering multiple outreach strategies when it comes to talent acquisition and thinking outside the labor box with underutilized demographics.

It’s a race for talent, and there’s no time like the present.