Taco John’s Tackles COVID Challenges, One Battle at a Time

The brand has continued to post positive growth amid pandemic conditions.

A few weeks ago, Taco John’s raised pay for “openers and closers” at corporate restaurants to $15 an hour. The change moved the recruitment needle a bit, but not to any substantial degree.

At one pandemic juncture, 380-unit Taco John’s had 172 dining rooms open in addition to its off-premises options (95 percent of the fleet feature drive thrus). The number since slid to about 150. In some cases, this is a reflection of wary consumers sticking to socially distant options. In others, “we don’t have dining rooms open because we just can’t find enough help,” CEO Jim Creel says.

Taco John’s challenge illustrates a broader battle facing restaurants in today's pandemic climate. According to the Bureau of Labor Statistics’ September jobs report, 2.3 million jobs were lost by the food and beverage industry since February—more than any other sector. After adding 200,000 jobs, the industry now employees a touch under 10 million people. Yet it’s still 2 million-plus short of pre-COVID-19 levels.

These reports progressed faster than some expected when unemployment soared to 14.7 percent in April—the highest since the Great Depression—amid a reduction of more than 20 million jobs. By June, north of 45 million had filed initial unemployment claims. A million people did so for 13 consecutive weeks, with the peak coming in the last seven days of March at 6.9 million. The previous high for unemployment filings in a single week was 695,000 in October 1982.

Last month, unemployment was 7.9 percent, with 10.7 million fewer jobs than in February. And some pundits actually peg the true number above 12 million when you factor in prevailing monthly job-growth trends taking place before the crisis.

On paper then, it would appear restaurants, as well as other industries, would be plucking from a substantial crowd. But that’s not been the reality, Creel says. “I think the unemployment assistance was needed for a while. But now, I think that’s becoming a barrier to those businesses who are trying to hire and can’t,” he says.

Creel is referencing the $600 in weekly extra federal unemployment pay included in the CARES Act. The measure expired in July. The Trump administration, though, enacted a Lost Wages Assistance program the following month that offered a $300 weekly supplement for up to six weeks, paid for with federal disaster-relief funds. Some states upped to $400.

And jobless benefits are heart to the $2.2 trillion relief package passed last week in the House. As it currently stands (changes are likely, if it passes at all), the proposal would extend the $600-a-week supplement through January 2021. Treasury Secretary Steven Mnuchin countered with a $400-a-week suggestion that would reportedly extend through December. A Senate Republicans act, brought forward in July, offered $200 extra a week.

According to a White House spokesman speaking with CNBC, these “negotiations are ongoing.”

President Trump Tuesday instructed aides to stop negotiating with Speaker Nancy Pelosi on stimulus legislation until after the November election. This, too, is a moving target.

Regardless of where it goes, here’s the present dynamic: Per recent data from the U.S. Labor Department, more than 26 million Americans received jobless benefits as of mid-September.

That’s the reality Taco John’s and other restaurants are competing with.

The $600 figure was billed a replacement rate that took the national average unemployment payment—$371.88 per week at the end of 2019—and added $600 to bring the coverage from 38 percent of typical bring-home to nearly 100 percent. The premise being $600 is what Congress thought it would take for the average American worker receiving unemployment to get to 100 percent of their income pre-COVID-19.

For a lot of minimum-wage sectors, though, it stressed the recruitment process, as Creel notes. UI benefits with $600 mixed in represented 160 percent of typical minimum wage, and as much as 270 percent in some states. More on that here.

And so, Taco John’s pushed wages higher to entice workers. “When you’re getting an extra $300-$400-$600 a week, it’s hard to make that sometimes in a restaurant,” Creel says. “I just think we’ve got to do what South Dakota did and not participate with that. And their unemployment is down in the 3 or 4 percent range again because they took away that assistance and people did go back to work.”

“That’s helping some,” he adds of the $15 wage. “But again, with the supply of labor so low, I don’t know what else we could offer that would really bring them in.” 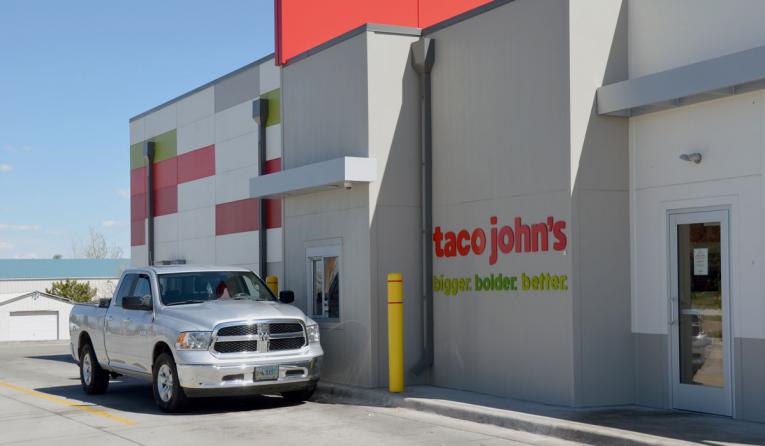 Naturally, reopening dining rooms would jolt Taco John’s system. Yet the chain that’s trademarked Taco Tuesday has done quite well without them.

From May through August, same-store sales climbed by an average of 6.85 percent each month. And it opened nearly half a dozen stores from the start of the pandemic through the middle of September.

Part of that success stems from the fact Taco John’s drive thru historically represents just under 65 percent of systemwide sales. So like many quick-serves, the brand was insulated a bit from the pandemic storm.

COVID rerouted the company's same-store sales to negative 12.5 percent in March. But it rebounded quickly. By April, Taco John’s top-line was negative 4.5 percent and has tracked positive ever since.

Creel says leadership met via Zoom seven days a week early on, just trying to decide how to help its 98 percent franchised system make it.

It wasn’t only safety and operational changes, either, but how to secure federal aid and shore up the balance sheet in case COVID endured longer than expected, which it did. A key turn: Roughly 80 percent of Taco John’s restaurants secured Paycheck Protection Program loans to bridge the March–April trough.

Going back to 2019, Taco John’s changed advertising agencies and linked up with Kansas City-based Barkley. The company dug into Taco John’s new “Bigger. Bolder. Better.” brand persona, coupled with a updated store design and image, and worked to break through to guests.

“The reason for the redesign and the whole makeover of our personal was really rooted in the problem that people didn’t know who we were,” Creel says. “Research told us we were there, they kind of knew us, but we were the creepy guy in the corner.”

Chicago-based food branding consultant Adrienne Weiss came on as well to look at Taco John’s visuals and direction, “just everything about us,” Creel says.

“And try to make us a little bit more of the cool kid.”

Between that reenergized look and Barkley’s creative spin, Taco John’s started to get its “Bigger. Bolder. Better.” messaging in front of the right audience, with a nod to differentiated value (hand-cut sirloin steak, etc.).

As COVID-19 loomed, however, Taco John’s was on the doorstep of introducing a new line of products. It pulled back and put its chips on value. Mainly, bulk food at a discount.

Next came the “Valuest Menu.” Still in pilot, it offers a $1, $2, $3 tier setup with items like the Chicken Snack Quesadilla on the one end, Cheesy Bacon Nachos in the middle, and the aforementioned Sirloin Steak & Potato Griller on the premium side. 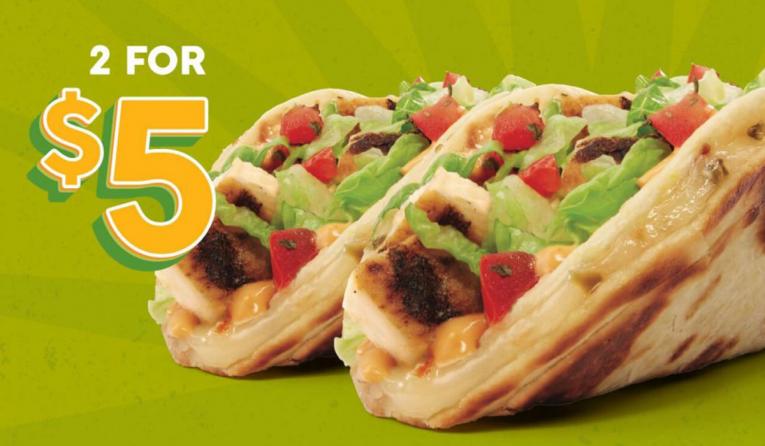 Similar to results McDonald’s reported with its tiered menu a couple of years ago, Taco John’s observed a lot of add-on behavior as opposed to guests simply ordering and sticking to value. In other terms, they bought a combo meal and stacked on one of the Valuest options. In addition to driving check, Creel believes it will bring value customers in more often. And that latter point is a critical one.

“We truly believe that value going forward, for the foreseeable future, is really going to be a key for the consumer,” he says. “As people are still going to be nervous about their jobs and they’re still a lot of people on unemployment unfortunately. And so, we think a value play is going to be big as well as more of the bulk food purchase.”

Also in the center of COVID—in late April—Taco John’s tapped Barry Westrum as its chief marketing officer. He arrived with more than 26 years of experience, including nearly 20 years at Yum! Brands and most notably as senior director of brand marketing for Taco Bell Corp. Westrum clocked time as CMO of A&W and Long John’s Silver and KFC Corporation. Additionally, from 2012–2017, he held the title of EVP of marketing for International Dairy Queen. Most recently, Westrum was CMO of Del Taco.

Creel says Westrum got right to work pushing a value menu and change of direction from where Taco John’s was headed previously, which was a more quick-service premium-type trajectory. Taco John’s shifted to value and family.

Over the next two, perhaps three years, Creel sees the family meal resurfacing in prominence. “It’s become a habit again to have dinner with the family, where maybe we had gotten away from that a little bit in society prior to COVID,” he says.

Another growth area came on the tech side. Pre-virus, Creel says, a lot of franchisees weren’t too excited about Taco John’s app platform, which rolled in late 2019 with digital ordering and delivery. Now, though, well over half the chain has adopted the app and dove into fresh channels, he says. 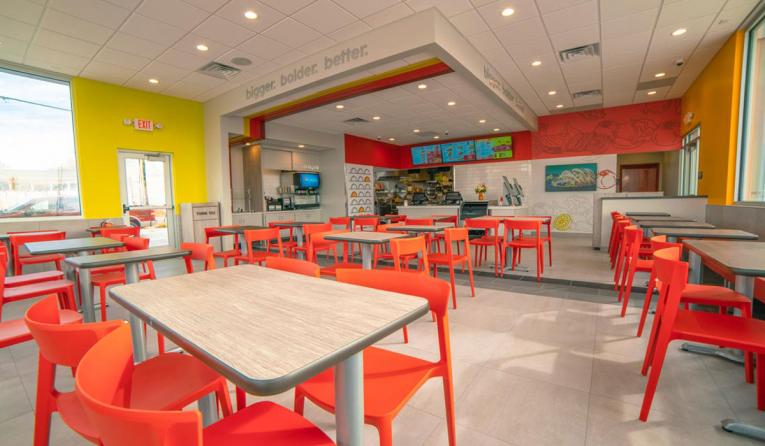 Sales are running 4–5 percent higher in those units. “We think that’s going to be a big part of our sales going forward—is keeping guests aware with special offers through the app and just bringing in that customer that we maybe didn’t have as much before,” Creel says.

Moving forward, Taco John’s is keeping an eye on real estate and expanded accessibility, such as pickup windows and stores that feature drive thrus but no seating. He says another four locations should open before the end of the year.

Creel expects commercial real estate to come available and for A and B locations to pop into the picture. “We’re looking forward to development,” he says. “…We’ve got a lot of interest right now in people looking at the brand.”