The Environment and Drive-Thrus: Not an Idle Concern Anymore

As the drive-thru surges again, so does the need to consider climate ramifications.

Drive Thru | September 15, 2021 | Danny Klein
Adobe Stock
The U.S. Department of Energy estimated that eliminating idling would be the same as taking 5 million vehicles off the roads.

Customers are waiting longer in the drive-thru these days, and that’s OK by them it seems. In QSR magazine’s 2021 Drive-Thru Study, guests showed a willingness to spend slightly more time going through the line than last year, with Gen Z and millennial consumers offering even more flexibility.

Overall, guests said they were OK sitting a maximum of 13 minutes (Gen Z and millennials were at 17 minutes). Last year, it was 12 minutes.

Customers also said they spent, on average, about 11 minutes in the drive-thru this past year versus 9 the year before. Ideally, they’d like to get in and out in 9 minutes—a number, again, up a bit from the previous calendar, when it was 7 minutes.

Why this is happening likely owes to a couple of factors. Smart phones, for one, which is a point supported by the younger consumer figures. Also, the straightforward reality people pull into more crowded drive-thrus of  late, given the safety concerns of a COVID-19 climate.

But a less-talked about fallout from more cars in the drive-thru and longer wait times is what role it’s playing in the conversation surrounding environmental responsibility and climate change. The health of the planet is an ever-present topic following the United Nations’ landmark report released in August. Authored by nearly 200 climate scientists, it revealed carbon dioxide in the atmosphere had reached the highest level in at least the past 2 million years, which is resulting in quickly warming temperatures. Since 1970, global temperatures increased faster than in any other 50-year period in the last 2,000 years.

Drive-thrus have been under this microscope before. Minneapolis in 2019 passed an ordinance to ban the building of drive-thrus. Towns in California, Missouri, and New Jersey have taken similar measures.

Idling engines contribute to emissions and increased fuel consumption, with government officials suggesting idling for more than 10 seconds uses more fuel and produces more emissions than restarting your car’s engine. The U.S. Department of Energy estimated that eliminating idling would be the same as taking 5 million vehicles off the roads.

As visible as this issue is, however, it’s not a simple one to address for quick-service chains, says Michael Oshman, the CEO of the Green Restaurant Association. But it needs to start somewhere. And with that, you can look to electric vehicles and how officials and markets have incentivized adoption to date.

“You had people who literally didn’t care too much about the environment who were buying electric cars because it could save them 50 percent on their commute,” he says. “So that really changed behavior. Now, obviously going through the drive-thru is not as much of an incentive. But if you think about a society that shifts in the way that incentivizes right behavior, then enough of them together starts hastening the pace.”

How can this mix into the drive-thru landscape, though?

Oshman says restaurants should consider offering an incentive for electric vehicles just like government officials do. “It will be one piece in a much larger pie that helps us move in the right direction as a society,” he says. It could mean different things. Perhaps restaurants dangle a discount. Down the line, if electric vehicles gain prevalence nationwide, when multiple lanes are factored into restaurant designs of the future, chains can create an “express” lane for “x, y, or z,” customer, Oshman says. That could include loyalty members cashing in on a rewards perk. Or maybe it’s someone helping the climate cause in an electric car.

Oshman admits these options fall into the large, macro conversation. “But they’re helpful in the long-term,” he says, “because if the [quick-service restaurant industry] does that, and the high-occupancy lane … all of sudden, for somebody in an electric vehicle there’s a great incentive in terms of time and money.”

Think this sounds fanciful? McDonald’s, according to Design Boom, became Sweden’s largest restaurant chain for electric car charging in 2019, with upward of 55 stations. The chain started installing posts as early as 2009. It also created unique parking signs to lead electric cars to the stations. These displays showed the current price of charging plus that of a Big Mac and Happy Meal. 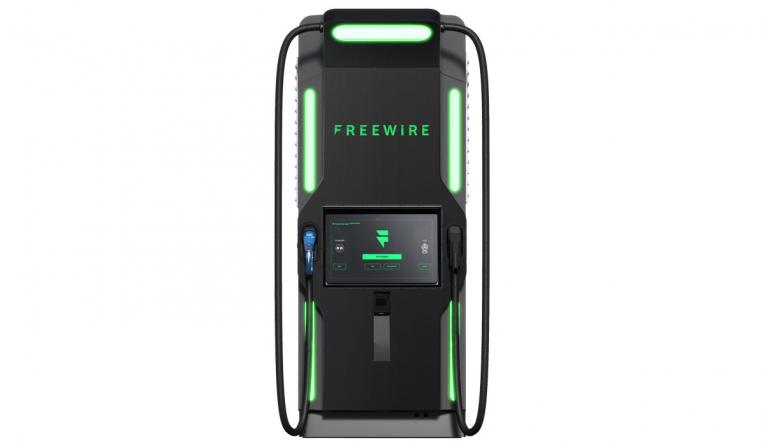 Restaurants can own and operate chargers on site, which offers an additional revenue stream at minimal cost.

Arcady Sosinov, CEO of FreeWire Technologies, a company that enables brands to offer charging without relying heavily on the utility grid (it created what it claims is the only battery-integrated fast-charging solution in the U.S.], says a big barrier for electric vehicles remains the concern of places to plug in. “Despite this challenge, EV adoption is accelerating, and there is a massive opportunity for [quick-service restaurants] to adopt and integrate EV charging into their business model,” he says. “This benefits both the restaurant from a brand awareness and revenue driving standpoint while promoting sustainability initiatives and retaining customer loyalty in this changing mobility landscape.”

Sosinov believes quick-serves are positioned to capitalize, if they think ahead. On average, people spend 25–30 minutes charging their car, he says. That’s far longer than the typical gas-station stop of 7 minutes, and, thus, a good chance for people to wrap the experience around lunch or dinner windows.

To the McDonald’s example, it’s a chance to boost awareness with branded stations, and restaurants can encourage return visits with loyalty programs on both car charging and menu items. Imagine, while drivers are charging, screens on chargers that showcase special food promotions available inside.

Domestically, in a lot of respects, the drive-thru dilemma remains at the mercy of the automobile industry, consumer education, and even the further development of “stop-start” systems that shut off engines when the vehicle is at rest, which cuts fuel use and eliminates idle emissions.

Oshman says brands could promote order-ahead capabilities at the drive-thru or pickup window (think Chipotle) as ways to help the current environmental concern. Generally speaking, it’s a far quicker experience and, thus, produces less idling moments. Oshman says restaurants might pass along some of those savings gained via digital ordering or pickup windows (less labor, real estate in the restaurant) to guests in an active way.

“They can also make the argument we’re incentivizing people to do this because a, it makes business sense and b, we can reduce idling by 90 percent because to come and pick something up, how long does that take?” he says.

Fifty-seven percent of consumers in QSR magazine’s Drive-Thru Study said they were “very likely” to tap app/mobile ordering in the drive-thru over the next 12 months. That figure was 50 percent last year.

“I would say that’s kind of a low-tech way, probably the best thing [restaurants] can do right now,” Oshman adds. “I think the other idea of incentivizing electric vehicles and rewarding them is great, but again, that’s a longer-term play. Whereas this one can be a few-months play of really giving great incentives. And in this day and age, almost everybody has smart phones and it’s accessible.”