Last July, Taco Bell made waves when it announced it was implementing “Hiring Parties,” to attract new employees. The tests took place at just four Indiana locations, though. It was a far cry from the typical job event. There was free food, party games, immediate interviews, and even gift-card signing bonuses.

Bjorn Erland, Taco Bell’s vice president of people and experience, told QSR earlier in the year that the deal was floated by PR agency Edelman in an effort to spin the average job fair, Taco Bell style. The brand ended up with almost a 50 percent hire rate with the people it interviewed, and had more than 400 applicants online—an added benefit the YUM! Brands chain didn’t expect. Local operators tapped community leaders, like Boys & Girls Clubs, to get the word out. Taco Bell ended up hiring 40 new people between the four stores in a single day, something Erland called, “pretty amazing.”

Act 2 is going to be a whole lot bigger. Taco Bell announced Thursday morning that participating corporate and franchised units nationwide are hosting nearly 600 Hiring Parties across 44 states, 500-plus restaurants, and nearly 450 cities from April 22–27. The brand said it hopes to kick start its summer hiring process, which typically draws in thousands of candidates each year.

The average Taco Bell restaurant hires 40 employees per year, and summer hiring results in an average of 10 extra positions per restaurant, per year, the company said.

“At Taco Bell, we believe that creating a different sort of work place starts with a hiring process as unique as we are,” said Frank Tucker, chief people officer of Taco Bell, in a statement. “People are an integral part of the brand, and Hiring Parties provide job candidates with an insider’s look at what makes Taco Bell restaurants a place to want to work and grow.” 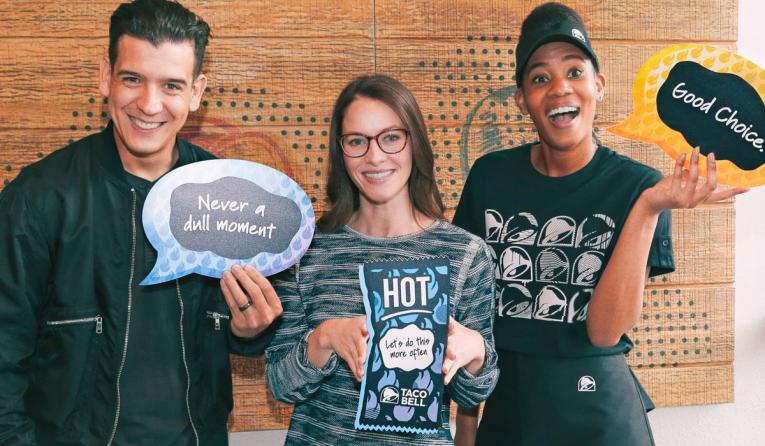 Once again, Taco Bell will stock the events with free food, trivia, and photo props to document the experience. It’s also launched a website for perspective employees to find locations with Hiring Parties: http://www.tacobell.com/hiringparties. Interested candidates can apply online for openings as well. Hiring Parties take place in restaurant and last around 2–4 hours.

Hiring Parties aren’t the only innovative labor idea in 2019 for Taco Bell. The brand said it’s partnering with Crew this year to test the company’s team communication app in select locations. The platform allows employees to access schedules and pick up or change shifts from their mobile devices.

Additionally, Taco Bell is rolling out new employee perks at corporate restaurants, like one free meal per shift.

“It is important to ensure passionate employees can get the most out of their time working at a Taco Bell restaurant—beginning on day one,” Erland added in a statement Wednesday. “Whether you start in a Taco Bell restaurant as a seasonal team member or stay for a decades-long career, everyone should be able to pursue their personal, professional and educational passions.”

The brand said it will be looking to fill the following roles:

Taco Bell is sticking to its earlier goal of creating 100,000 new U.S. jobs by 2022. The chain previously stated it would open 200 stores annually, and have 8,000 stateside, 9,000 globally, by 2022, which opens a lot of opportunities. Taco Bell opened a total of 151 restaurants last quarter and debuted 309 for the year, including 94 international units, bringing the total to 7,072 restaurants. In 2018, Taco Bell’s franchisees committed to more than 1,100 international units under development agreements. 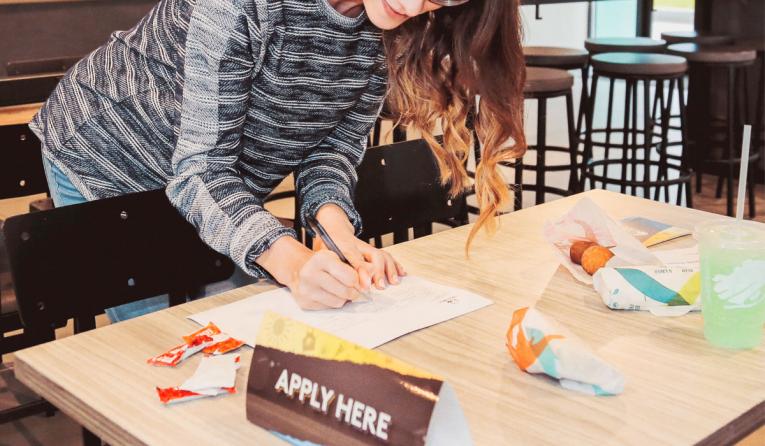 And in regards to Erland’s note about employee engagement, the Taco Bell Foundation more than doubled its funding goal this past year, committing to award $21 million in scholarships by 2021, with more than $4 million on the table for 2019—$1 million more than what was awarded in 2018. Customers will also be able to round up their order total to the nearest dollar to checkout ($1.49 Crunch Taco becomes $2) to help fund education.

Taco Bell didn’t skimp this past year on employee benefits, either. In November, Taco Bell said it was well ahead of its commitment to award $10 million in Live Más Scholarships by 2020. Three years to be exact.

Back in March, Taco Bell announced it was extending its Guild Education pilot to all 210,000 employees in its system of 7,000-plus U.S. restaurants. Previously, Taco Bell piloted the program in about 700 company-run restaurants, a pool of more than 2,000 employees. Taco Bell saw a 30 percent increase in employee retention for those enrolled over the first six months. Employees enrolled in a course, program or degree through Guild had a 98 percent retention rate in that same space—a 34 percent increase over those employees who were not enrolled.

Taco Bell unveiled its plan of 100,000 new jobs by 2022 in fall 2016. The “Start With US, Stay With Us,” platform arrived last November. Education was center to this strategy. The Graduate for Mas Program, which to that point had enrolled nearly 600,000 people, helped participants who promised to graduate gain access to resources, mentorship support, prizes, and rewards, such as scholarship.

The Missing Piece to Consumer Satisfaction in the Restaurant Industry
The Next Wave of On-Demand Restaurant Delivery
What are the Biggest Challenges with Implementing Dynamic Pricing?