The chain is three years ahead of schedule.
Employee Management | November 2018 | Danny Klein

Taco Bell closed the third quarter with an 8 percent increase of system-wide sales and same-store sales growth of 5 percent, year-over-year.

Taco Bell is well ahead of its commitment to award $10 million in Live Más Scholarships by 2020. Three years to be exact. But instead of simply celebrating the fact, the YUM! Brands chain decided to more than double that commitment to $21 million by 2021.

The Taco Bell Foundation announced Monday it is also opening its Live Más Scholarship foundation for the fourth year in a row, with more than $4 million available for young students—$1 million more than what was awarded this past year. Taco Bell unveiled this update during American Education Week and National Scholarship Month.

“When we first committed to awarding $10 million, we never imagined we would be more than doubling it so quickly,” said Tina Nguyen, executive director of the Taco Bell Foundation, in a statement. “We know that affordability is a major barrier to education, so we hope that by doubling our funding, we can double the number of doors opened for young people, and remove twice as many obstacles for innovators, creators and dreamers.”

The Live Más Scholarship program supports post-secondary education and opportunities for students aged 16–24 to pursue their passions that may not necessarily fit into the typical academic or athletic scholarship categories. The applications ask for a 2-minute video describing the student’s passion. No grades, essays or tests. The application will close February 21, with winners announced in the spring.

In the first three years of the program, the Taco Bell Foundation has awarded $5.8 million in education support to nearly 600 students, including Taco Bell employees. Students have also been given access to opportunities beyond finances, through workshops to help develop personal and professional skills, and the Taco Bell Foundation’s partnership with MENTOR: The National Mentoring Partnership.

The initiative joins Taco Bell’s other commitments to education programs. The brand’s Guild Education partnership offers day one employees access to discounts at 80 online universities and personalized college advisors. A pilot of the program showed a 34 percent increase in retention for those enrolled.

A more recent push was the introduction of Hiring Parties this past July. Taco Bell invited job-seekers into restaurants to learn about benefits and experience the company’s culture on-store, with games, free good, merchandise, on-the-spot interviews, and gift card “hiring bonuses.”

All are part of Taco Bell’s Start With Us, Stay With Us campaign. Back in March, Taco Bell announced it was extending its Guild Education pilot to all 210,000 employees in its system of 7,000-plus U.S. restaurants. Previously, Taco Bell piloted the program in about 700 company-run restaurants, a pool of more than 2,000 employees. Taco Bell saw a 30 percent increase in employee retention for those enrolled over the first six months. Employees enrolled in a course, program or degree through Guild had a 98 percent retention rate in that same space—a 34 percent increase over those employees who were not enrolled.

Through the program, employees have access to personalized college advisers and tuition discounts for thousands of classes, certificates, and degrees the moment they start working with Taco Bell. So those who attend the hiring parties and walk away with a job are instantly open to the benefits. Taco Bell said it’s using the events to hire a variety of positions, from front line to management, and will help the company add to the 3,000 existing employees it has in the area already. 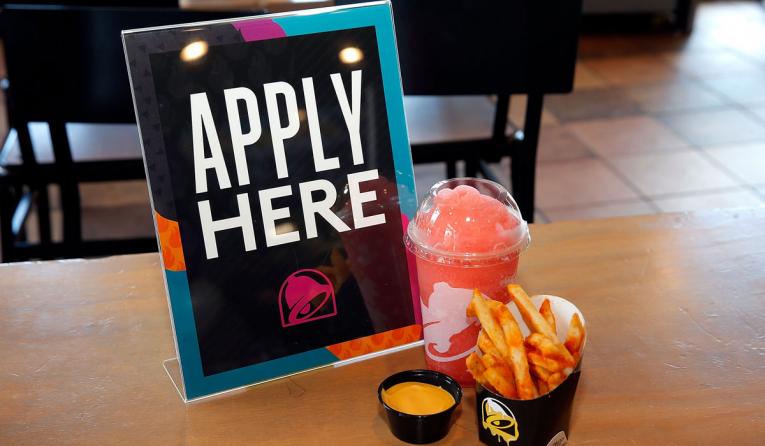 All Taco Bell corporate and franchise employees have access to Guild’s academic and financial aid coaches and discounts to Guild’s education partners through the platform—a network of 80 online non-profit universities and learning providers, offering Bachelor’s and Master’s degrees. These programs include high school completion and English-as-a-second language, and there is also a wide selection of certificates available.

Taco Bell corporate employees, along with those at participating franchises, also have access to up to $5,250 per calendar year in tuition assistance, including books and supplies, paid up front to avoid out-of-pocket costs. All employees can also get college credit for on-the-job restaurant training, which could save an employee an additional $5,000, Taco Bell said, bringing their potential total savings to more than $10,000.

The “Start With US, Stay With Us,” platform arrived in November. Education was center to this strategy. The Graduate for Mas Program, which to that point had enrolled nearly 600,000 people, helped participants who promised to graduate gain access to resources, mentorship support, prizes, and rewards, such as scholarship.

Taco Bell closed the third quarter with an 8 percent increase of system-wide sales and same-store sales growth of 5 percent, year-over-year.