Teenagers Surge Back Into the Restaurant Workforce

The pandemic has reversed a trend that dates back to the recession.

Employee Management | July 8, 2021 | Danny Klein
Unsplash/Vaishnav Chogale
Teenagers once outnumbered adults aged 55 years or older in the industry 3 to 1. Those kinds of figures are making a comeback due to COVID-19 conditions.

Here’s an illustration of the hiring crisis in action: According to a July 6 report from Snagajob, the term “labor shortage” was searched more in May 2021 than during any other month in Google’s history. Not a COVID-19-specific event, but the entire stretch of the search engine’s two-decade-plus existence.

The industry added 194,300 jobs in June—nearly one in every four jobs created were in restaurants—per the Department of Labor. Even so, restaurants remained nearly 1.3 million workers below February 2020.

In particular, jobs in the quick-service industry are 20 percent down compared to life before the virus, seeing 5 percent month-over-month growth and 3 percent year-over-year expansion. Sit-down restaurant jobs are 41 percent lower, with month-over-month numbers declining 13 percent. Year-over-year figures are up 11 percent from the COVID bottom.

And while all of this evolves, workers’ wages have risen substantially, up 3.6 percent overall, year-over-year. In particular, hospitality workers made 7.9 percent more in June than February 2020.

Throughout the crisis, customers have shown a tendency to offer restaurants a break with COVID issues. Whether that’s staffing, wait times, pared-down menus, and so forth. But that clock appears to be ticking.

The chatter from guests mentioning restaurants being understaffed in online reviews and feedback is climbing, Black Box Intelligence said. From February to March, “understaffed” mentions increased 181 percent for full-service restaurants; 78 percent for quick-service.

So restaurants are scrambling to staff up as summer demand kicks into gear.

Chipotle on Thursday announced it was using “TikTok Resumes” to recruit “purpose-driven Gen Z applicants.” It’s also hosting a “Coast-to-Coast Career Day” on July 15, with the goal of hiring an additional 15,000 employees.

“Due to the competitive labor market, Chipotle is continuing to experiment with new methods of meeting its potential applicants where they are,” the company said. TikTok Resumes allows prospective employees to showcase their personalities in ways that aren’t available in traditional resumes or sit-down interviews. Candidates apply to Chipotle through video resumes via the social media platform.

The brand, in recent months, increased wages from $11 to $18 per hour (a $15 average at the hourly level) and laid out a career ladder for people to advance to a “Restaurateur” role, which is defined as the highest-level GM. In as little as three-and-half years, a Chipotle worker can bring home $100,000. Since the start of 2021, it’s hired more than 82,000 crew members and promoted north of 4,200 people.

But let’s circle the TikTok initiative. Among the many labor challenges on deck, there is one welcomed trend emerging for restaurants.

The fact hourly workers are suddenly commanding $15 an hour and above, is helping to surge teenagers back into the equation, reversing a sloping trend that started after the Great Recession.

In May, 33.2 percent of Americans aged 16–19 had jobs, according to the DOL. Even after slipping to 31.9 percent in June, it’s still higher than pre-pandemic levels. And more notably, 33.2 percent is the largest count since 2008.

Neeta Fogg, Paul Harrington and Ishwar Khatiwada, researchers at Drexel University’s Center for Labor Markets and Policy, annually release an forecast for the teenage summer job market, as reported by Fortune. This year, they believe 31.5 percent of 16–to–19-year-olds will boast jobs—the best summer since 2008.

The Bureau of Labor Statistics found 1.7 million teens clocked in at restaurants in 2018—the same number as 2007. The key there is the figure stagnated despite the total restaurant count leaping 16 percent.

According to the National Restaurant Association, teenagers once outnumbered adults aged 55 years or older in the industry 3 to 1. It slid to 2 to 1 before COVID. And that older demographic rose by 70 percent between 2007–2018.

For the first time in history, though, the unemployment rate for teens aged 16-19 has fallen below that of workers aged 20 to 24, the DOL just reported. 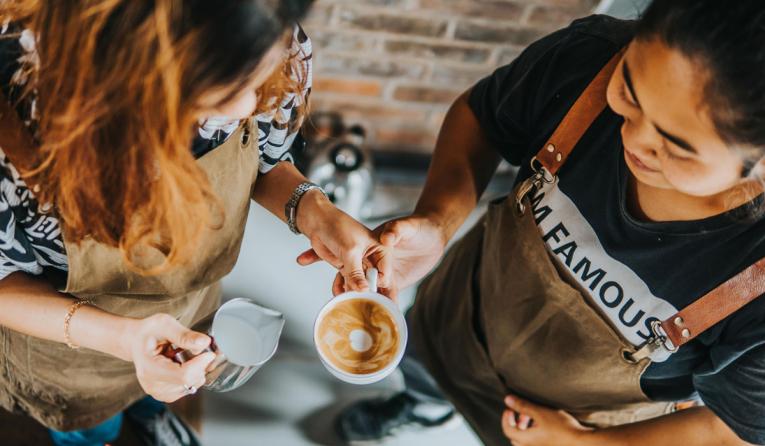 Seventy-five percent of the restaurant workforce in 2020 was Gen Z or millennials.

Some experts credit the years-long decline to an economy offering fewer low-skill entry-level jobs than in the 1970s and 1980s. Fortune pointed out those positions, what remained of them, were increasingly being scooped up by older workers, “many of them foreign born.”

Additionally, college become a natural step for teenagers. Far more than it was 40 years ago, at the least. In turn, teenagers from affluent families, eager to secure admission to top universities, Fortune said, “have for years chosen summer academic programs over jobs or have pursued ambitious volunteer work in hopes of distinguishing their applications for college.” Others leaned toward competitive sports, like AAU and other travel programs designed to lure scholarships.

But, naturally, this summer is something of a unicorn. Thanks to COVID, the economy is bursting in sectors that generally covet seasonal labor. Restaurants, bars, retail, amusement parks, etc.

And given the uncertainty of vaccine rollouts in April and May, employers have scrambled to catch up on hiring to serve pent-up demand in recent months. Restaurants chief among them.

Snagajob said teenagers are reentering the job market rapidly, up 35 percent year-over-year. Vaccines are giving parents piece of mind to send them back. Plus, unlike adults, teens aren’t eligible for unemployment benefits. One other point—there are six times more college deferments than the year before.

There was a time when teenagers took jobs and accepted the negatives. It was an understood growing pain to sign up for hourly work, for low pay, and generally poor conditions.

That’s altered in a gig economy flooded with remote opportunities. Teenagers are now able to set their own terms. Hence the wage lifts, better benefits, and also the reality they can pick and choose from a lineup of brands they want to associate with. It’s why Chipotle is trying to position itself to a demographic it believes can strengthen its base, and do so in an arena they identify with, like TikTok.

Seventy-five percent of the restaurant workforce in 2020 was Gen Z or millennials. Of the 6.55 million workers employed in food preparation or service at the end of the year, 39.4 percent were Gen Z, 35.6 millennials, 11.6 percent Gen X, and 13.4 percent Boomers.

Meanwhile, past realities are pulling in the opposite direction. Former President Donald Trump previously suspended J-1 work-and-study visas as a coronavirus precaution. Foreign workers, often brought in on these, tended to fill summer jobs across the country, Fortune said.

Older Americans have been hesitant to return as well.

Health concerns, as well as childcare issues in the face of shutdowns, continue to linger. And as mentioned, adults can tap into expanded unemployment benefits, which end nationwide September 6.

To Chipotle’s example, restaurants are scrambling to shed barriers for teens to apply. Wendy’s allows applicants to apply via smartphones. They’re screened through AI. Papa John’s is offering $50 referral bonuses for corporate team members for every new hire they bring in, with an additional $50 bonus paid to the new team member. Taco Bell was conducting interviews from people’s cars.

Fast casual Curry Up Now, as mentioned in the Fortune article, pays $2 above minimum wage and is offering a fund for teens to pay for classes or books, in addition to free Zoom classes on how to manage money.

The teenager boon will undoubtedly take a hit when the summer ends and people rush back to school. But hopefully some of the other pressures will ease in tandem. Remote learning will transition back to in-person and unemployment benefits will slide off.

What isn’t likely to adjust, however, are wages. BTIG analyst Peter Saleh told QSR the pandemic-driven imbalance between consumer demand and availability of labor drove a spike in wages and commodity prices. While commodity prices should moderate once supply catches up with demand, wages and higher prices are a different story.

History tells us once wages climb, they don’t revert. The same is true of menu prices.

And so, one of the lasting imprints of COVID might just what it does to the race to $15—a top-tier topic before the crisis. At this pace, a long-term journey could become moot in a matter of months.

It’s been 12 years without a penny increase in the $7.25 federal minimum wage. Will it matter, however? Or will the current labor climate speed up the wage process before the government does?

Either way, on a broad scale, customers should expect to pay more for their food as an after-shock of wage pressures. Between 2015 and 2019, the average menu price increase, per Knapp-Track, was 2.4 percent. Saleh expects effective price to near 4 percent this year to offset higher rates.

“I think is all going to stick,” Saleh says.