Why Restaurant M&A and Bankruptcies are Just Getting Started

The sector has a debt problem, a new study reveals.

Finance | November 11, 2020 | Danny Klein
Unsplash/Claudio Schwarz
There have been plenty of deals already during COVID. But more are coming.

In a COVID-supercharged M&A climate for restaurants, sometimes you just need to follow the debt. And the current state suggests there’s a lot more deals to come. Consulting firm AlixPartners released an October study that came to a telling conclusion. While sales and traffic declines might be stabilizing for chain restaurants (transaction declines down 9 percent each week in October, year-over-year, according to The NPD Group), industry debt has reached perilous levels.

In the past half-year plus, operators emptied the tank—mentally and financially—to shift and survive. It’s been a constant battle. Protocols are ever-changing and consumers continue to adjust behavior on the flip of an official statement or case count report. By the National Restaurant Association’s prediction, this fluid challenge has shut the doors, either permanently or long-term, on nearly one in every six U.S. restaurants, or 100,000 locations.

According to Yelp, the industry’s closure rate outpaces adjacent sectors of retail and home décor by nearly 50 percent.

These restaurants on the brink are succumbing to direct consequences of COVID, including increased expenses related to health safety, capacity restrictions, and ongoing weakened consumer sentiment—issues only exacerbated by the debt load the sector took on prior to the pandemic.

Back in August, the James Beard Foundation released survey data that suggested only 66 percent of independent bars and restaurants expected to survive the fall season without direct aid. Frothing to the top of this concern was the fact close to 75 percent reported taking on new debt obligations north of $50,000. More alarming, 12 percent tagged the number at $500,000 and above.

In regards to customer sentiment, an operator survey from Rewards Network found only 3 percent of restaurants felt demand hadn’t change since COVID. The top answer, by far, was 50 percent demand, with nearly 45 percent of respondents choosing the option.

AlixPartners said growing debt, and the deterioration in operating performance required to service it, has forced heightened levels of investor and debt-holder concern and oversight in an industry which, pre-virus, was enjoying growth and foot traffic at near-historic levels. One thing to note, the traffic growth was spread out across an oversaturated industry (thanks to growth at twice the rate of the population). Hence, restaurants started to raise prices and ladder guests up to more premium menu tiers to take advantage of a willing consumer. Generally, traffic across the industry was sliding, but average check was rising. There was a question whether or not that was eventually going to burst and force a course correction. At this point, though, COVID rendered the possibility meaningless. It’s simply not the same guest or landscape it was before.

SOME COVID DEALS AND BANKRUPTCIES

Inside Bar Louie’s Emergence from Bankruptcy and $82.5M Sale

California Pizza Kitchen Reduces Debt as it Emerges from Bankruptcy

Thompson Hospitality to Buy Matchbox Out of Bankruptcy

Trudy’s Texas Star to be Purchased for $6.5 million

Boston Market Acquired by the Rohan Group of Companies

To AlixPartners’ statement, however, the count of U.S. restaurants and bars increased at a 2.2 and 2.5 percent CAGR over the last there and five years, respectively, according to Rabobank. Roughly 45,000 new restaurants (net of permanent closures) opened in the last three years—more than in any other comparable period over the last 25-plus.

The rate of expansion accelerated meaningfully, from growth of 1.7 to 1.8 percent over the last two decades, as operators jumped in to take advantage of decades-low unemployment levels, rising discretionary incomes, favorable demographics, and multiplying delivery and ordering options, which totaled more than a third of overall foodservice sales growth in the last three to five years.

Like all things, it benefited some more than others—a zero-sum dynamic where one concept’s growth potential came at the expense of somebody else’s. One example: Rising rents in retail mails and high-traffic areas, such as the urban locations so many fast casuals gravitated toward when prices dropped. Suddenly (this was before COVID), the industry arrived at an inflection point of sorts. A lot of brands were strapped with expensive leases, declining guest counts, and high costs, mostly jump-started by wage pressure. Also, there was an abundance of inexpensive money dipped into by restaurants out of the financial crisis in 2008–2010. And as interest rates climbed back, those same parties had to write debt at a higher interest rate.

A lot of bankruptcies were taking form well before the crisis. But today? We’re now likely looking at a situation where the pandemic’s weight impairs the restaurant industry’s long-running expansion cycle. Rabobank pictured that as a fallback to long-term averages, or a 40–60 basis point slice from a previous future outlook.

Returning to the debt conversation, AlixPartners said restaurant debt has more than doubled since the beginning of the Great Recession. To the aforementioned scenario, restaurant companies took advantage of continuously low interest rates over the past decade and levered up to fund expansion and drive shareholder returns. It represented a large shift from 10 years ago when the sector’s debt levels were low in comparison with others. Here’s a look at the situation, with McDonald’s omitted due to its massive share.

Number of businesses closed per 1,000 businesses since March 1 (from Yelp)

The limited-service restaurant segment, encompassing fast food and fast casual, nearly quadrupled debt between 2009 and the end of 2019. The full-service sector saw a less aggressive increase in its debt of nearly 30 percent. During the early days of COVID, brands across both sectors proactively engaged in negotiations with lenders, AlixPartners said. The goal being to draw down on revolvers to maximize liquidity runways and avoid covenant violations. This increased debt between 2019 and the last 12 months 2020 by 8.1 percent for limited-service units and 15.7 percent for full-serves. The former now sits at more than four times as much debt, while full service is at nearly 50 percent more than at the start of the Great Recession. 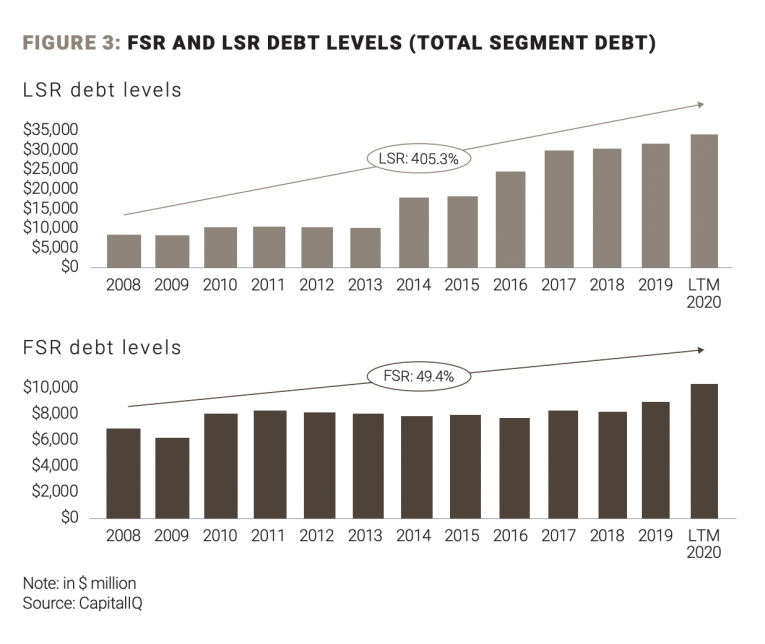 And here’s something to consider as well in terms of M&A potential. Rabobank said M&A opportunities appeared ready to accelerate as COVID-driven sales deterioration, along with economic recession, spurred the pace of exit and consolidation in an already highly fragmented restaurant field.

Large publicly traded restaurant companies continue to raise significant cash (new issuance and/or drawdown on existing credit lines). In some cases, it’s happened in far excess of their near- to intermediate-term cash needs. In fact, Rabobank said, aggregator cash holdings by 25 of the largest public brands more than doubled, from $9.4 billion pre-virus to nearly $20 billion, by mid-May. Each of these chains now carried more cash than before coronavirus struck. And if you believe dollars are up for grab with fewer units nationwide, larger and stronger brands are positioned to go after new customers. So the cash build-up can be seen as not just a defensive strategy to improve liquidity, but as a more aggressive M&A stance as well.

While the sharp increase in debt for limited-service restaurants is noteworthy, AlixPartners said, the model proved more pandemic ready, with EBITDA down only 9.5 percent from 2019 to last 12 months June 30, 2020. Full-service, meanwhile, witnessed a significant 45.6 percent decline in the same time period. During Q2 of this calendar alone, the first full quarter of the pandemic, 41 percent of all restaurants reported negative EBITDA and 45 percent shared negative levered free cash flow.

At such unprecedented stress levels, restaurants have limited options in their paths forward, AlixPartners said. Rent abatements and Paycheck Protection Program loans bridged the short-term gap. Yet operators continue to press for incremental and direct aid from officials with the $120 billion RESTAURANTS Act.

In order to continue to service existing debt and prevent the need for additional financing, restaurants (especially full-serves) are in need of a significant turnaround in performance, AlixPartners said. There’s really only one bankable answer—a strong consumer return to restaurants. Something operators really don’t have ample control over when it comes to dine-in.

In Rewards Network’s survey, only 15 percent of restaurants said they were allowed to serve at full capacity, with nearly half saying they were running at 50 percent.

Of the operators at less than full capacity, 29 percent said they could keep their doors open indefinitely. This is a point that’s surfaced in multiple studies. The James Beard survey, in collaboration with the Independent Restaurant Coalition, said 50 percent capacity wouldn’t be enough to stave off mass closures. Rather, operators said they needed nearly 60 percent, on average, to keep going.

Owners in a Coca-Cola study said they had to reach 55 percent seating capacity in order to remain profitable.

But as we all know, case spikes of late are troubling. The country reported 102,831 new infections last Wednesday—the first time since the start of the pandemic America reported a six-figure number.

In the absence of more customers returning to restaurants, AlixPartners said, operators could be forced to contemplate a series of debt restructurings in the coming months and year. So more bankruptcies and sales out of bankruptcies await.

“And even if restaurants are successfully able to recast their business models to accommodate pandemic-driven shifts in consumer behavior, it is possible that the financial performance of their newfound operating structures may simply not be enough to overcome elevated debt levels,” the company said. “In this difficult scenario, restaurants must preempt long-term challenges in being able to continue servicing their debt obligations. Options include getting creative during negotiations in order to realign debt levels to the new operating structure.”