Domino's has opened 1,148 global net units over the last 12 months.

In order to maintain Domino’s quality and quick delivery speeds, the only people chief executive officer Ritch Allison trusts with the product are the chain's own drivers. And that’s not going to change, no matter how big the third-party space gets.

A strong digital presence—its Piece of the Pie Rewards program has 20 million active members—allows Domino’s to guard share in the evolving space, Allison said during an April 24 conference call.

“When I take a look at our U.S. business, I don't see any need for us to go onto these third-party platforms,” he says. “We have an incredibly strong digital channel in our business. We're far and away the digital leader in pizza. So, it's just not clear to me why I would want to give up our franchisees’ margin or give up the data in our business to some third party, who will ultimately use it against us.”

Both carryout and delivery continued to grow during the first quarter of 2019, driving sales domestically and internationally. Domino’s posted its 32nd consecutive quarter of positive same-store sales in the U.S., while hitting 101 straight periods of international growth.

U.S. same-store sales rose 3.9 percent in Q1, falling slightly below market expectations. It marked Domino’s slowest performance in more than five years. But it’s worth noting it measured against a robust comparable period of 8.3 percent in Q1 2018. So it still paints an impressive two-year stack.

Allison didn’t mince words on the delivery dilemma and where Domino’s stands. Control over the process not only protects product quality, he said, but also keeps costs down in corporate and franchise locations. Delivery from a Domino’s driver builds brand awareness instead of that interaction going to a third-party aggregator. 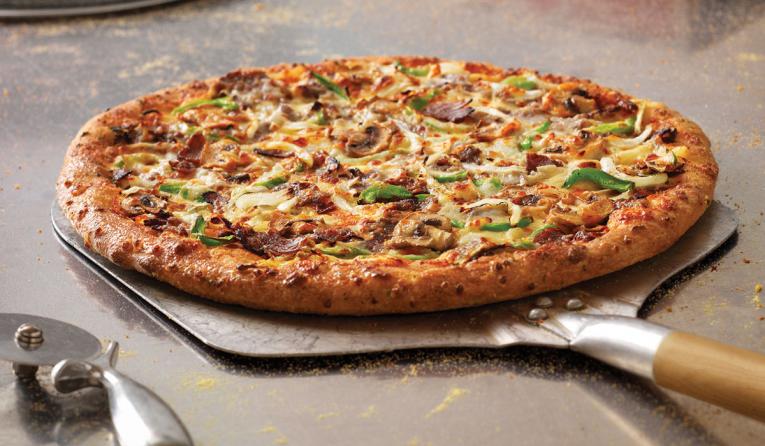 “I'd have a tough time sleeping at night if I was handing our food to an untrained, random third-party driver to then carry that over to our customer, because what happens when you have a service failure or you have a product quality problem in that situation?” Allison said. “Who's to blame? And I really like the closed system and the control that we have, that our franchisees have, around making sure that the great pizzas that they're producing every day get to the customer hot and fresh and delivered by a uniformed Domino's Pizza driver.”

Allison didn’t go into specifics during the call, but pointed out that the company’s research shows in-house delivery also runs significantly lower at cost than third-party. Size and speed play into the equation, too.

“We're probably advantaged in that relative to the other players simply by the fact that we've got significantly more scale,” Allison said. “And what really drives that cost per delivery is the number of deliveries per hour that we can get per driver, and the distance that we ask those drivers to take the food away from our restaurants.”

Domino’s plans to push against third-party delivery pressure with its fortressing strategy, which allows the company to deliver pizza quicker and more efficiently by flooding markets with multiple locations. The strategy lifted Domino’s past 16,000 stores. In Q1 alone, Domino’s debuted 200 units—27 net in the U.S. and 173 net internationally.

“Continuing to go faster on the fortressing strategy, shrinking down these service areas, putting in more technological tools for our operators, both corporate and allowing our franchisees to use tools as well to manage their own independent businesses, I think gives us a chance to continue to fight through the labor rate challenges and to continue to drive good dollar profit,” CFO Jeffrey Lawrence said.

Through fortressing, Domino’s can bring its products to more people, faster, and offer service superior to third-party options, Allison said. And customers appreciate the convenience. He added that customers aren’t willing to walk, drive, or ride a bike very far to pick up pizza—the average is about a mile. By maximizing its footprint in every market, Domino’s increases the likelihood of carryout pizza as well.

“[Carryout] is a piece of the business that we can really own and terrific profits in that business,” Allison said. “You don't have the same complexities and cost around managing the delivery side of the business.”

Franchisees also benefit from fortressing, he said. Domino’s works with already established operators to develop a specific market, instead of trying to link up with multiple vendors. One example: the sale of 59 corporate stores in New York to six franchisees who want to grow their businesses. 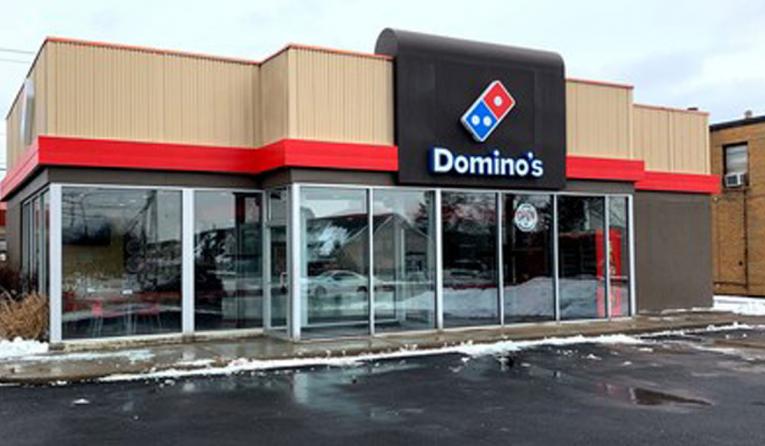 “What that allows us to do is to take the capital and energy that we would have spent continuing to build in New York, and we built quite a few stores in New York over the last couple of years,” Allison said. “We'll take that capital and energy and we'll direct that at our remaining corporate markets, so we can continue to grow and to build the brand.”

Allison has big growth plans for Domino’s internationally. He told CNBC Domino’s wants the brand to hit 25,000 stores globally by 2025. Again, going back to the fortressing notion, this will help with customer convenience, cut down on delivery times, and stem the increasing delivery competition.

Same-store sales for the international division crawled 1.8 percent in Q1. Domino’s said it plans on applying strategies that are working domestically to reinvigorate the global side.

Domino’s is exploring other promotions for its loyalty base, like the Points for Pies program, which launched right before the Super Bowl, to engage users and bring new customers into the fold. Customers could earn points for any pizza they scanned.

More than half of all of Domino’s global retail sales in 2017 came from digital channels (primarily online ordering and mobile applications). In the U.S., the company generates north of 60 percent of its sales via digital and has produced several innovative ordering platforms, including Google Home, Facebook Messenger, Apple Watch, Amazon Echo, Twitter, and text message using a pizza emoji.

Since the loyalty program began three years ago, Domino’s has tried to find ways to monetize it and engage customers. Guests who interact with the app are more likely to be repeat users, Allison said.

“We remain focused as always to continue winning on value, winning on innovation, winning on service and winning with the best franchisees in quick-service space,” Allison said. “That's how we'll dominate this category for the long haul as the No. 1 pizza company in the world.”