"We are too commonly labelled as “super-spreaders,” he says.

Tom Bené believes restaurants have become a convenient scapegoat for reflexive shutdowns. The CEO of the National Restaurant Association has fought this perception battle throughout COVID-19. And it’s surfacing in force as cases spike to record highs and markets across the country hit stop yet again.

“There is an unfounded impression that restaurants are part of the problem, and we are suffering as a result of inconsistent, restrictive mandates,” Bené said in a statement. “Data tying systemic community outbreaks of COVID-19 to restaurants has yet to emerge, but we are too commonly labelled as ‘super-spreaders’ …”

The Association Tuesday sent a letter to the National Governors Association circling the point—that there’s no scientific evidence linking restaurants to case surges—and to urge officials to consider policies and regulations that will enable the industry to safely serve communities for the duration of the crisis.

“To date, a systemic outbreak of COVID-19 has not been found coming from the hundreds of thousands of restaurants around the country that operate within the Association’s COVID-19 Safe Operating Guidance and follow the guidelines of local public health safety regulations,” it said.

The Association’s letter noted restaurants have been proactive (those that follow the guidelines). They boast enhanced FDA Food Code practices to require food coverings for staff, request face coverings for guests, require more frequent hand sanitizing, provide customers with hand sanitizer, and have increased their frequency of cleaning and sanitizing of high-touch surfaces. Restaurants also, the Association, added, updated floorplans to ensure social distancing of at least 6 feet between guests.

While none of these protocol updates are news to anybody who’s run a restaurant since March, the Association doesn’t think operators are getting credit.

As governors determine whether socially facing businesses, like restaurants, should be closed or scaled back, the Association suggested the following considerations:

Why this is suddenly frothing over is two-pronged. One, markets are stepping back to lockdown mode in many cases. California Gov. Gavin Newsom announced Monday that the state is pulling an “emergency brake” on its reopening blueprint by placing 94 percent of its population under conditions that keep indoor dining closed.

In late August, Newsom announced a color-coded tiered plan that grouped counties based on the severity of their COVID outbreaks. Purple, which is the highest tier, meant COVID was widespread and restaurants could only offer outdoor dining and off-premises. Last week, only 13 counties were in that category. That figure ballooned to 41 on Monday.

And California joined five other states that have either closed or substantially closed indoor dining: Oregon, Washington, New Mexico, Illinois, and Michigan—a list more likely to grow than retract in the coming weeks. 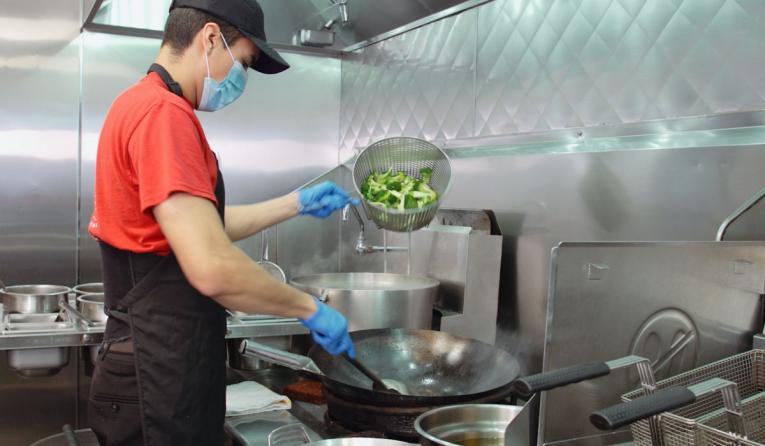 Panda Express was ranked atop a recent list of restaurants practicing COVID-19 safety.

Revenue Management Solutions’ latest data showed stable demand in the sector. But it bears asking, what happens when cases rise, as they are today?

As we’ve seen throughout COVID, it isn’t often the fear of infection that restricts demand for dining in, but rather official mandates that pull back options and limit seats. That’s simply what the numbers show.

As of November 14, year-over-year traffic remained steady at negative 11 percent (it was down 10 percent in October), RMS said. Sales were positive at 1 percent, with a slight decrease from October’s 4 percent.

Full-service traffic improved in November, down 27 percent compared to negative 29 percent in October. Year-over-year sales for the sit-down segment continued to improve over the past four weeks, going from negative 26 to negative 23 percent.

Delivery, meanwhile, continues to outperform, up 60 percent versus 2019 levels. Drive-thru traffic was 16 percent higher, while dine-in traffic witnessed a slight improvement from negative 43 to negative 41 percent.

Again, though, it feels tenuous at best as cold-weather approaches.

And the fear from the Association is that as outdoor dining absorbs the brunt of Mother Nature’s wrath, indoor dining might be gone altogether for many, leaving them to March-April’s model of off-premises-only setups. So the message of being a “super-spreader” during broader case spikes nationwide could prove fatal for thousands of restaurants.

“The recent surge of COVID-19 cases has prompted governors to make difficult decisions about how to reduce transmission in the community. We continue to support aggressive steps to protect the nation’s public health. But there is an unfounded impression that restaurants are part of the problem, and we are suffering as a result of inconsistent, restrictive mandates,” Bené wrote in the letter. “Tens of thousands of additional restaurant bankruptcies—and millions of lost jobs—are now more likely, while the science remains inconclusive on whether any health benefits will accrue. While scientists know far more about the viral exposure risks from homes, workplaces, and commercial establishments over the past eight months, the response from many officials harkens back to the blunt-force approach taken in March.”

A Nature.com study by a Stanford University-led collation published a model last week that identified indoor business, including restaurants, as potential super-spreader spots.

The model used anonymized data from mobile applications to study mobility patterns in 10 large cities and follow 98 million people’s movements and infection rates from March to May. It essentially correlated time spent at indoor venues with more infections, as well as lower capacity with reduced numbers.

The model added if occupancy for all venues was capped at 30 percent, it would reduce the number of additional infections to 1.1 million. At 20 percent, it went down 80 percent to about 650,000 cases.

The Association took issue with much of the report. It said, “the project created an ill-advised correlation between the exercise and the risk of dining at restaurants. Like polling data, modeling data cannot reliably be used to draw definitive conclusions about the actions of a group of people or determine outcomes.“

“Due to the complexities of the real world, predictive models are inherently fraught with error even under the best of circumstances. In this case, the researchers' model seems to fit their data, so they conclude that it is reasonably accurate. However, this is not enough to assert that restaurants are a significant source of risk across the entire United States,” the Association said. Here were some other concerns.

Amesh Adalja, a senior scholar at the Johns Hopkins Center for Health Security, echoed some of the Association’s points in an interview with Stat. Mainly, he said restaurants need to be looked at through a more dynamic lens. To Bené’s point, restaurants in early March are very different than today. “We’ve seen in the epidemiology that now it’s not restaurants or even large gatherings that are driving spread, but small gatherings,” Adalja told Stat.

The publication added that, heading into winter, spread has occurred more in people’s homes than in public places. That wasn’t captured in the study since they weren’t mobile—they were just at home.

The key, the article said, is to get people to start taking the virus seriously, no matter where they are, from at-home gatherings to restaurant meetups. Bené’s plea is for officials to acknowledge restaurants are.

A CBS 2 story out of Chicago said contract tracers, at least right now, don’t present data specific enough when it comes to restaurant spread. One scientist told channel investigator Megan Hickey the fix could be as simple as proper ventilation.

The Illinois Department of Public Health noted contact tracers found (in descending order) workplaces, schools, and bars and restaurants to be the top three areas of possible exposure for known cases.

Aligned with the Stat piece, Dr. Anu Hazra, who oversees contract tracing with Howard Brown Health, said outbreaks took hold with employees. But the data is much more conclusive when it comes to household spread. “Aside from like a major super-spreader event, it’s really difficult to pinpoint, well this came from this one restaurant or what,” he told CBS 2.

Jose-Luis Jimenez, a professor of chemistry and environmental studies, added in the article that, from an airborne transmission perspective, closing indoor dining would help, but restaurants shouldn’t be singled out from other indoor interactions found in stores or gyms, for example.

His suggestion was for operators to invest in carbon dioxide detectors you can find on Amazon for less than $200. If they read in the 600–700 range, customers are inhaling less air that’s exhaled by other people. Jimenez believes that’s how officials should decide what to close and how to close. Proper ventilation and filtration systems would result in lower carbon dioxide readings.

Staying in Chicago, Gov. J.B. Pritzker said in October “bars and restaurants are super-spreader locations.” His office went as far to provide a chart showing that in August and September, 2,300 confirmed COVID patients visited a restaurant or bar in the previous two weeks.

But the numbers don’t say for sure whether those people contracted the virus at a specific bar or restaurant. Restaurants led the “places visited” but were not the only stops along the tour. It brings the conversation back to its center—that it’s nearly impossible to trace infections to an exact spot, or business. And why are restaurants taking one haymaker after another?

Adam Gewanter, managing partner of TAO Chicago in River North, told the Chicago Sun-Times, they require masks, take temperatures of customers, and sanitize (as Bené alluded to). “Our goal is to be part of the solution—not part of the problem,” Gewanter told the publication.

He added, “I don’t want to see the restaurant industry labeled as super spreaders because that’s not true. As far as the data are concerned, I’d love to read it.”

Dr. John Schneider, medical director for the 55th Street clinic at Howard Brown Health, said in the piece workers in cramped kitchens were at more risk than customers. And restaurants and bars themselves aren’t necessarily the concern. Rather, it’s the face-to-face meetings of people in the venues that increase risk.

So the result isn’t all that different than a home gathering. If people follow protocols, including social distancing, face coverings, handwashing, etc., likelihood of transmission drops significantly.

Is that on the restaurant to police or the customer who walks through the door? And can you argue that restaurants are a conduit for irresponsible behavior, whether they’re doing everything they can or not? Hence the 10 p.m. curfew recently put in place by NYC. Those are the difficult questions facing operators, consumers, and officials alike in these coming months. And as the data, or lack thereof, brings up, we just don’t have the answers yet.