While safety precautions are complicating the experience, there's still plenty of pent-up demand.

Restaurants have often provided a bright spot for people during difficult times.

By mid-July, 85 percent of all restaurants should—barring a setback—be located in markets where some level of on-premise dining is permitted. Today, it’s already 77 percent, according to The NPD Group.

When you consider Georgia set this in motion April 27, it’s been a relatively quick pace, at least by COVID-19 time, when March felt 70 days long.

And despite case spikes in Arizona, California, and Florida in recent days, the three states showed several points of improvement over the past week, NPD said. This suggests, minus the possibility of reinstated lockdowns, people are still eating out, rising numbers or not.

In sum, counter-service chains are a single point away from recovering 90 percent of their 2019 transactions. Full-serves are gaining quickly after plunging north of 65 percent during much of March and April.

David Portalatin, NPD food industry advisor and author of Eating Patterns in America, believes the only major variable in play with a case surge is an erosion in consumer willingness to dine out.

“There are three main variables that will influence continued restaurant recovery: reopening of on-premise dining and expanding allowed capacity; the willingness of consumers to dine out and feel safe and confident in doing so; and the economic well-being of the consumer,” he said in a statement. “Thus far, the evidence in restaurant transactional improvement confirms that dining rooms are opening, and there is consumer demand to fill opened restaurants.”

So, any erosion tied to case surges appears to be a background thought. That’s the pulse of the consumer thus far. Could that change? COVID-19 hasn’t met a trend it can’t punt off course yet. There’s also the factor of restaurants themselves needing to close after employees test positive. We don’t know how that will unfold on a broad scale.

But, for now, consumers are mostly giving restaurants the green light to forge ahead.

Recent data from Sense360 supported this point across multiple industries. Olivia Watson, who heads the company’s marketing efforts said, “… the prevailing media narrative has been one of concern about states reopening and a second wave of coronavirus, but that doesn't appear to have had a severe impact on the recovery of foot traffic.” 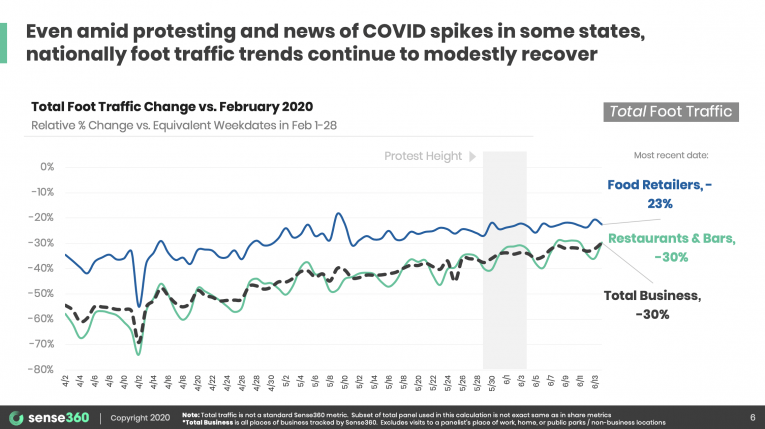 The only place there’s a visible correlation is in New York and New Jersey. Remove those and most of the case-declining states are behaving the same as states with higher numbers lately, Watson said. 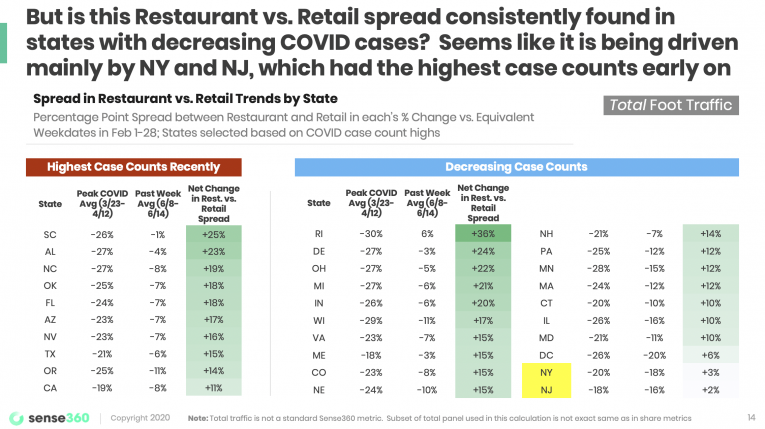 As we dive into this recovery period, though, a lot of pitfalls and unknowns remain. Datassential polled 4,000 consumers from June 5 to June 15 to get their sense of the current landscape and where restaurants slot in.

It starts with an essential question: Who is going to return first?

Close to half of consumers have ordered takeout in the past month, the company found, whether from a drive thru or visiting the restaurant itself (curbside, etc.). Yet as dining rooms start to reopen, a third of Gen Z, millennials, and households with kids have eaten meals in, outpacing older generations.

“Have you done any of the following in the past 30 days?”

Got restaurant food from a drive thru

Got takeout inside restaurant

Diner at the restaurant itself

Got restaurant food for delivery

Got adult beverages for delivery

Got groceries for delivery

The bottom line: Younger diners will be among the first to flock back to dine-in service. It’s also interesting to see drive thru and takeout outpace delivery. The adoption remains low with Boomers.

This makes contactless service a key unlock across all channels, not just delivery. Breakfast chain First Watch is using community tables—now rendered obsolete—as contactless pickup zones for guests and third-party drivers. Chipotle invested in takeout shelves ahead of COVID-19, and is deploying them at full tilt today.

Contactless options are in demand across the entire consumer journey, from online ordering and payment to on-site processing and order pickup. Some restaurants are even looking into mobile “kiosks” where guests order and pay from their seat without interacting with anybody. Others are making menus available through each guest’s smartphone via QR code.

If fellow patrons and employees are the main roadblocks to dining out, contactless might just be the bridge wary consumers are seeking. Either way, spreading it to carryout in addition to delivery is a good place to start.

Per a report from Dragontail Systems, of nearly 70 percent of customers who ordered delivery during the pandemic, more than 70 percent said they would be more inclined to dial up carryout over delivery if given the option for a contactless experience.

Ido Levanon, the company’s CEO, credited instant gratification and a higher perception of food quality for the result. And one thing customers are learning during the pandemic, too: Carryout also tends to be a lot cheaper. 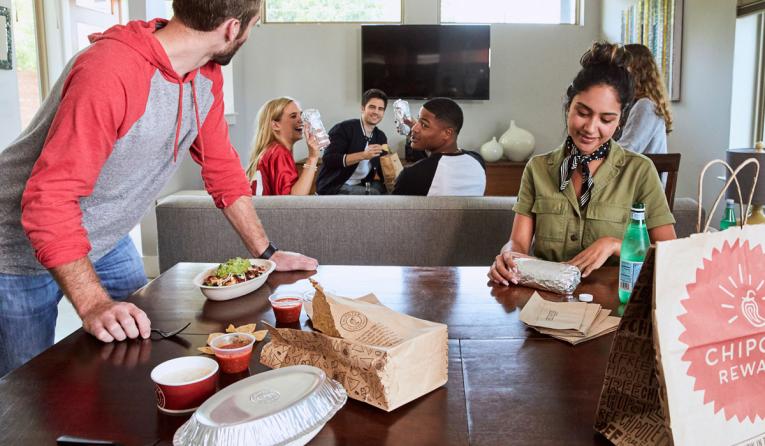 Chipotle CEO Brian Niccol recently said it would be a "home run" if the brand could keep a solid portion of its elevated digital sales as dining rooms reopen.

Safety precautions are turning out to be a double-edged sword, Datassential said. Guests understand their importance and even appreciate the fact they’re a door back into restaurants. However, on the same token, guests feel dining out just isn’t the same with those barriers in place.

During a strange period when people want to suspend reality, and escape to pre-COVID-19 days, protective gear and social distancing are a constant reminder of the opposite. And thus, the balancing act begins for restaurants.

Operators really can’t sidestep the steps needed to reassure diners they’re taking their safety seriously, though. There’s no easy way to weigh these two realities. Not everyone is going to be happy, but restaurants need to lead with keeping employees safe.

“How do you feel about these new precautions at restaurants?” (Percentage of people who agree)

Overall, in general, people seem willing to make sacrifices to dine in, even if it detracts from the experience as they remember it. It will be interesting to see how pent-up demand counters this customer segment electing to stay inside even when they don’t have to anymore. Will restaurants break even? Will they come out ahead or behind?

It’s a sector conversation, and why brands like Chipotle hope to keep elevated digital business flowing as dining rooms reopen. CEO Brian Niccol said last week the fast casual’s done so in the 70–80 percent range so far. With that, added off-premises should help balance the dine-in drop from limited seating in the near-term. And it offers alluring potential if the two can coexist later when partial restrictions lift and dine-in returns to pre-virus highs.

For other restaurants, especially in fine dining, things like coronavirus surcharges and higher prices, or expanded outdoor seating, might just be essential to survival for a while.

A recent survey from the National Restaurant Association found 75 percent of operators think it’s unlikely their restaurant will be profitable within the next six months.

Hordes of restaurants owe rent and have past due invoices for food, the Association said. They’re also now paying “extraordinary prices” for the safety measures necessary to keep patrons and employees safe. All this with 25–50 percent seating.

On June 18, Sen. Roger Wicker in the Senate and Rep. Earl Blumenauer in the House introduced the RESTAURANTS Act, a bipartisan $120 billion relief package intended to help independents, especially those left behind by the Paycheck Protection Program.

The revitalization fund “provides hope of survival for small business restaurant owners from the smallest towns to the broadest urban streets,” the Association said.

It might take some outside help to keep a lot of restaurants afloat.

Despite the detractors of elevated safety measures, restaurants still play a vital role in helping people return to normal. They connect consumers to their communities and each other. Yet while restaurants remind us of better times, this sentiment has declined 5 points since April, Datassential said, likely due to the new mandatory precautionary changes.

“How do you feel about the following regarding restaurants in light of the COVID pandemic?”

Eating at restaurants reminds me of better times

Eating at restaurants is a big part of how I socialize

It’s clear the “new normal” dented restaurant experience to some degree. In theory, these numbers should reset as further restrictions ease. But we also don’t really know how long certain practices, like masks, will remain part of widespread protocol.

Sweetcatch Poke, with five locations in New York City, isn’t allowing guests to enter stores without a mask. Customers are offered one or asked to leave if they refuse to wear one. It’s a line brands are having to draw in the coronavirus sand.

But the overall drop in sentiment remains pretty low, all things considered. As restaurants slowly reopen, they will provide a haven for some pandemic-weary Americans seeking normalcy, Datassential said.

“Not only do they provide a temporary escape from the worries of COVID, but they are a way to treat ourselves, both with good food and a feeling of reconnection back to our communities,” the company said.

“How do you feel about the following regarding restaurants in light of the COVID pandemic?”

“How do you feel about companies putting out statements in support of quality, ending racism, or Black Lives Matter?

That’s just the start. Datassential’s survey found that while most Americans want companies to stand up and make statements for equality, words without action risk being perceived as insincere and profit motivated.

“Consumers need to know companies are in it for the long run, not just while the topic is newsworthy, and they expect to see actions to back up their statements,” the company said. “Not only will this inspire hope, but companies will be rewarded with extra loyalty, especially from younger generations.”

“Please rate the following statements regarding how you feel about statements of support from companies.” (Percentage is true answer)

2100 S. Clearwater Drive
Des Plaines
IL
847-803-5000
Chicago Faucets supplies quality products from the front to the back of the house. (more)
Business Services