The First 22 Days of March: Restaurants Have Lost $25 Billion

Traffic is shifting by the minute. Can restaurant operators evolve?

Consumer Trends | March 2020 | Danny Klein
istock
Will a comeback arrive swift and furious? We sure hope so.

As evident by every metric trackable, the restaurant industry is changing by the day as COVID-19 demolishes any sense of normal. Datassential debuted a “Coronavirus Traffic Brief,” Thursday to spotlight some of this disruption.

From a poll of 1,000 consumers, the insights company found that nearly one in every three consumers (March 24–25) purchased food from a restaurant the prior day. While that doesn’t sound overly dramatic, it’s a steep fall from pre-coronavirus levels of 50 percent.

Despite close to 60 percent (57) of respondents at least thinking about getting food from a restaurant, only 30 percent went on to do so. That can be viewed two ways: One, fear is a significant behavior roadblock propped up today—something tossed into the equation brands typically face with consumer frequency. Things like competition, online reviews, and financial mindfulness (should I eat at home and save money?). Restaurants are dealing with a new, 500-pound weight stacked on a bar that was already difficult to lift.

Secondly, it shows restaurants remain in the consideration set for most Americans. That’s a clear positive, and it also suggests (if things hold steady) we can be in line for a swift comeback when the restrictions drop off from city and state mandates.

THE REPORTS SO FAR

It’s probably safe to assume a solid portion of diners will remain wary of going out and socializing for some time, even when officials tell them to. But there will also be a slew of customers ready to rush out once the signal is given.

Now, will those things balance out in restaurants’ favor? Pretty hard to guess as we stand, but it’s going to be a welcomed moment nonetheless. If anything, it will infuse hope into an industry that deserves a morale boost.

To some pundits’ point, however, a vaccine or something truly concrete might be the only real, long-lasting cure to customer confidence. Regardless, you can bet on restaurants playing a leading role in peoples' lives returning to some semblance of normal, as they always have.

Barring a global catastrophe like this, restaurants have long proven recession proof because they provide a cost-effective outlet for experiences. In the 2008 financial crisis, people flocked to dining establishments in favor of things like family vacations. Pound for pound, restaurants provided a more budget-friendly option and offered an accessible, familiar escape from day-to-day stressors. And quick service served guests across multiple vantage points, from people who were watching bank accounts to those who hoped to take the whole family out.

There’s no reason to think, post COVID-19, consumers won’t turn to restaurants for respite. That’s what history tells us. 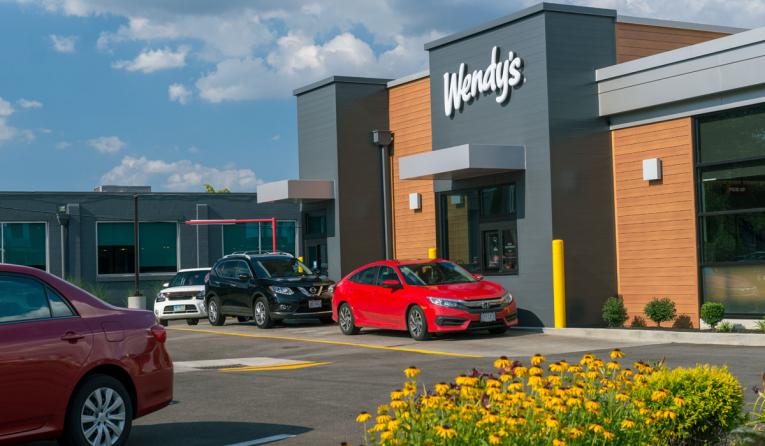 Wendy's said Thursday 90 percent of its sales are now coming via drive thru.

Where is the traffic going?

Datassential’s report showed counter-service brands are capturing two-thirds of restaurant traffic—65 versus 35 percent in today’s climate. The latter figure proves there’s still a strong pulse for sit-down operations around the country. Delivery, curbside, and creative, new approaches are helping concepts keep the lights on. But for how long and how sustainable is this, is something hopefully federal aid can ease in the coming days and weeks.

As of Wednesday, according to Black Box Intelligence’s Daily Tracker, year-over-year comp sales for full-service brands declined 74 percent on average during the last five days. Off-premises sales reached north of 60 percent growth, year-over-year, for sit-down concepts and almost 30 percent for quick-serves, as of March 23.

However, consistent with historical trends, satisfaction scores for consumers ordering delivery remained significantly lower than dine-in and takeout sentiment. And that’s where some of the current issues lie. Meanwhile, per Black Box, grocery sales surged 52.9 percent compared to the same week last year as consumers shifted 10 percent of their share-of-stomach spend away from restaurants to grocers.

Datassential’s latest poll illustrated a change in daypart activity, too. Before coronavirus, lunch was consistently No. 1.

But here’s where we stand today (percentage of consumers who ordered from a restaurant yesterday):

Datassential suggested restaurants consider optimizing menus for dinner traffic, including a focus on family meals or packages that provide the consumer additional food for the following day.

Where is the traffic taking place? Unsurprisingly, nearly exclusively outside the dining room. In addition to delivery and drive thru, many Americans are ordering ahead to reduce potential exposure (handing over cash or cards is a big detractor). Restaurants that offer this option should promote it heavily.

Datassential also found that the majority of people are heading to chains. There could be a few explanations at work. The first being the most painful reality, which is just the rash of independent closures in recent days. Many started by offering delivery and takeout, and have since progressed to simply shutting for a couple of weeks in hopes of incoming aid. Or the percentage of sales driven through off-premises channels wasn’t enough to maintain operations and pay staff. For others, they were already on the brink before the COVID-19 anvil fell.

The other possibility is that customers are turning to legacy and large-scale brands they know and feel comfortable with. But the first option is likely playing a bigger part, as is the fact limited service continues to dominate restaurant traffic. Generally speaking, quick-service brands are chains.

A survey of more than 4,000 operators conducted by the National Restaurant Association, released Wednesday, said 3 percent of operators had permanently closed their restaurants; 44 percent temporarily shut down; and 11 percent anticipated permanently closing within the next 30 days.

Nationwide, sales plummeted 47 percent from March 1 to March 22. In that time, 54 percent of polled restaurants switched to off-premises service only. Seven in 10 had to lay off employees and reduce work hours, and roughly half said they expected more layoffs and hourly cut backs in the coming month. Additionally, more than six in 10 said they had to reduce store operating hours. A full 88 percent noted that total sales volume over that stretch was lower than it was a year ago.

“The industry has never experienced anything like this before,” Hudson Riehle, the Association’s senior vice president of research, said in a statement.

It amounts to an estimated $25 billion in sales lost during the first 22 days of March and more than 3 million jobs, the Association said.

Among those getting food from a restaurant, 47 percent said they felt either nervous or at risk during their ordering and eating experience. “Go the extra mile,” Datassential said, “even if it’s extreme, to make patrons feel safe.”

Sixty-six percent of respondents also noted they think it will be safe to dine inside of restaurants within three months.

That final point is obviously a troubling one. Yet it seems too early to bank on it. As we’ve realized throughout the coronavirus crisis, perception shifts dramatically by the minute. One strong message could change everything. Or, to the earlier hope, something like a vaccine would go a long, long way to erasing those fears.

Let’s look at some solutions

Here were some answers:

“Social-media posting about all steps being taken to provide safe prep and sale, as well as working with limited crew to decrease exposure risks.”

Stay active, even if you're closed. Post with empathy, transparency, and direction. Here’s a great piece on where to begin.

“If people are picking up food to go, insist that people in line maintain distance from each other. Also place credit card machine on a small table away from the cashier in order to create space.”

This is a great point. Some brands, if they have the parking for it, have tried out make-shift drive thrus where they ask customers in advance for the car color and model. Car pulls up, restaurant looks out the window. Brings it over. But if that’s not feasible, this respondent’s ideas are right on the money. Just do everything you can to keep people away from each other, as crazy as that might sound.

“Don't have the full menu. Just a few of the most popular.”

“To wear gloves, clean fruits and veggies before using. Do not handle meat products with bare hands. Close down buffets, increase the water temperature of the dish washer. Keep a close eye on employees to see they wash their hand and follow instructions to the letter.”

What’s interesting about this is how closely people are paying attention. The biggest mistakes brands can ever make is underestimating the guest. 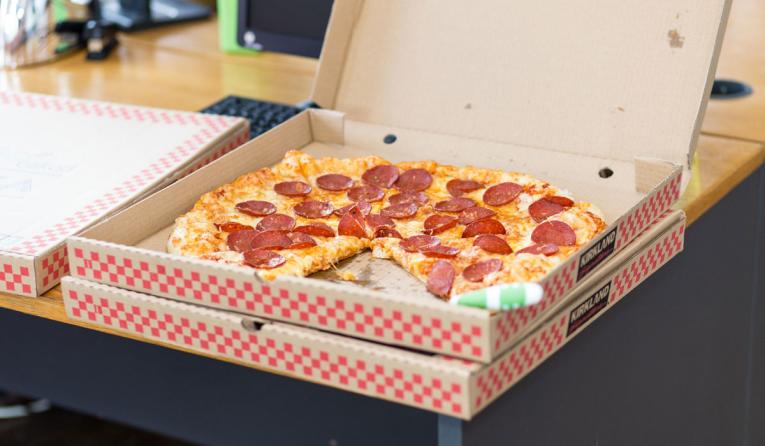 Quick-serves are weathering the storm better in the early going.

What people worried about most when ordering from a restaurant:

How food was prepared

How food was delivered:

How food was packaged:

The most difficult thing about this is that the top-tier concern for customers is also the hardest for restaurants to communicate. You can showcase packaging and delivery logistics plain enough. But how do you talk about the preparation when nobody sees what’s going on? Again, get on social media. Get the messaging online. Maybe even include notes with orders about how the food was made and the careful preparation it took, along with a list of sanitary practices going on behind the scenes.

Gen Z appears more worried about the delivery process than anybody else.

The packaging does matter

In Datassential’s report, the majority of customers found all categories of to-go accessories to be at least somewhat risky. The company suggests sealed utensils or tamper-proof seals and stickers to reassure customers.

Styrofoam or other foam packaging

Let’s go over the top

“Despite growing fear and questions around food safety, consumers just want to be assured of the basics,” Datassential said.

Here are some ways to demonstrate that.

“If ordering delivery/takeout, what would you want to know the restaurant was doing to handle your food safely?