How Restaurants Can Appeal to Modern Kids

Children visited quick serves around 12.1 billion times from July 2018 through July 2019, NPD Group data says. That’s a lot of children and parents to keep happy every year, and brands have to ask themselves: What are kids looking for on the menu?

According to an August study from Chicago-based Y-Pulse, a food-focused youth marketing research firm, kids are looking for familiar foods. “Both kids and adults favor fresh and simple menu concepts that are familiar,” Y-Pulse executive director Sharon Olson says.

As kids begin to select their own meals, it’s more important that quick-serve brands provide options that fulfill their cravings. According to NPD, most kids begin ordering their own meals by the age of five, and more than 75 percent of parents say they would change their decision on a dining location depending on how much their child likes a brand or menu item. In the earliest stages of childhood, parents’ opinions are usually the deciding factor in selecting where to eat, but NPD says this changes as their offspring get older. Parents with younger children search for restaurants with a kid-friendly vibe—such as places that show kids’ programs on TV or allow children to be loud and “act like kids.” But older kids are looking for a more adult ambiance when dining, and also prioritize more extensive menus.

Kids’ menus remain the most popular choice for ordering children’s meals. NPD’s research shows that around 75 percent of children aged 2–5 eat from kids’ menus, while it’s the same for around 55 percent of kids aged 6–10 and just over 20 percent of 11- and 12-year-olds. However, with about 18 percent of children reported as obese, many restaurants are making moves to offer healthier meals and beverages, and quick serves and fast casuals are among those brands hopping on the health-based train. 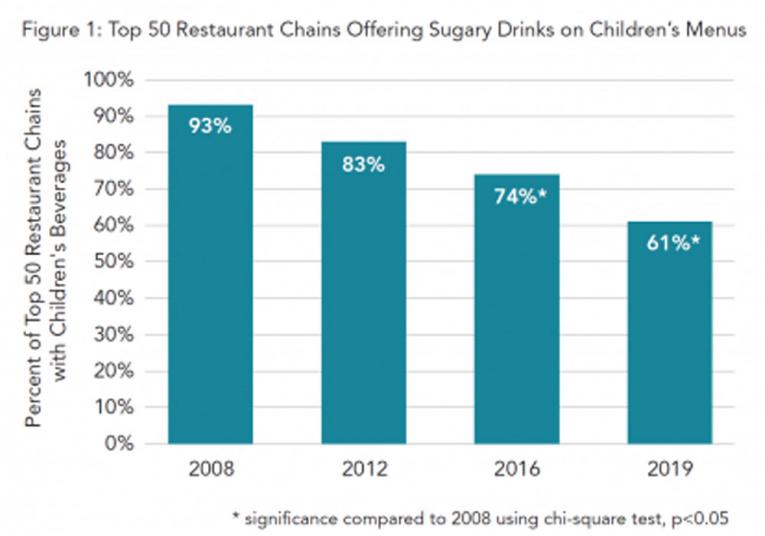 Center for Science in the Public Interest

In fact, according to research from the UCLA Fielding School of Public Health on 20 popular quick-serve chains, meal bundles that include at least one fruit and one non-fried vegetable increased on the menu by nearly 58 percentage points between 2004 and 2015—from less than one quarter of bundles to about 80 percent of them. Overall, 30 percent of the chains studied provided healthier kid choices by 2015.

Restaurant meals are associated with kids eating more calories, sodium, sugar, and saturated fat and less fiber, says Megan Mueller, assistant researcher at the Fielding School of Public Health. Still, her research points to more quick serves than full-service restaurants offering healthier dishes to kids. “While there has been progress toward offering healthier children’s menu items, there’s still room to make changes that make it easier for children to eat healthy when they eat out,” she says. “For example, more restaurants could start offering fruits and non-fried vegetable sides by default in kids’ meals.”

Beverages are another area of concern for children when dining out, and research released in July by the Center for Science in the Public Interest showed that sugary drinks are less prevalent now on kids’ menus than they used to be. The research showed that, of the top 50 restaurant chains, 39 have children’s menus, and, of those brands that tout kids’ menus, 61 percent push sugary drinks for kids—a significant drop from 93 percent in 2008. McDonald’s announced in 2013 that it would offer only water, milk, and juice with its Happy Meals. Wendy’s nixed sugary drinks from kids’ menus in 2014, followed by Burger King and Dairy Queen a year later. “Since over one-third of children in the U.S. eat out on any given day, restaurants are uniquely positioned to encourage healthy eating among children,” Mueller says. “Offering more healthy options on children’s meals, bundling healthier sides and beverages with all meals, and advertising healthier options are some of the many ways restaurants can help encourage healthy eating.”

21 Main Street, Suite 204
Hackensack
NJ
203-883-6060
SH Franchise Finance is an independent finance company, so we know what it is like (more)
Cooking Oil Management