Can Popeyes Become One of the World's Fastest-Growing Brands?

There are rumors abound of Restaurant Brands International’s plans to acquire a fourth brand. Some reports suggest a seismic merger with Domino’s. Other hinted at Papa John’s. RBI, for its own part, hasn’t provided any fuel to the speculative fire. But the company’s January announcement that CEO Daniel Schwartz was leaving his post to become chairman, and take a larger workload with 3G Capital, offered enough ammo to spark water cooler chatter. Following the decision, Schwartz said, “We’ve always been opportunistic when it comes to the M&A. … We’ve proven in the past, we can do a number of things and it’s something that we’re going to continue to monitor into the future.”

Instead of speculating for now, though, let’s look at RBI’s most recent purchase. On March 27, 2017, RBI acquired Popeyes Louisiana Kitchen for $1.8 billion. It was a major move because it gave the Burger King and Tim Hortons owner a serious stake in the chicken game. The only other multi-brand competitor on that level was YUM! Brands, with its KFC-Pizza Hut-Taco Bell triumvirate.

Needless to say, RBI wasn’t adding a low performer into its system. One of the company’s defining traits since forming in the wake of its 2014, $11 billion takeover of Tim Hortons, has been net restaurant growth. If you look at just Burger King, the fast-food giant was growing by roughly 170 units per year when 3G Capital spent $1.56 billion and grabbed control nine years ago. Now, Burger King is pushing about 1,000 locations each calendar turn, and is up to 17,796 restaurants. In 2018, RBI achieved net restaurant growth of 5.5 percent across its three brands.

For some comparison in the category, KFC ended 2018 with 22,297 total restaurants. Of those, a whopping 16,764 were international. Chick-fil-A had 2,225 U.S. locations to close 2017. Wingstop and Church’s follow Popeyes around the 1,000-unit domestic mark. The KFC number especially gives credence to Schwartz’s global optimism with Popeyes.

Below is a look at how RBI has scaled Popeyes in regards to net restaurant growth, quarter over quarter, by percentages. 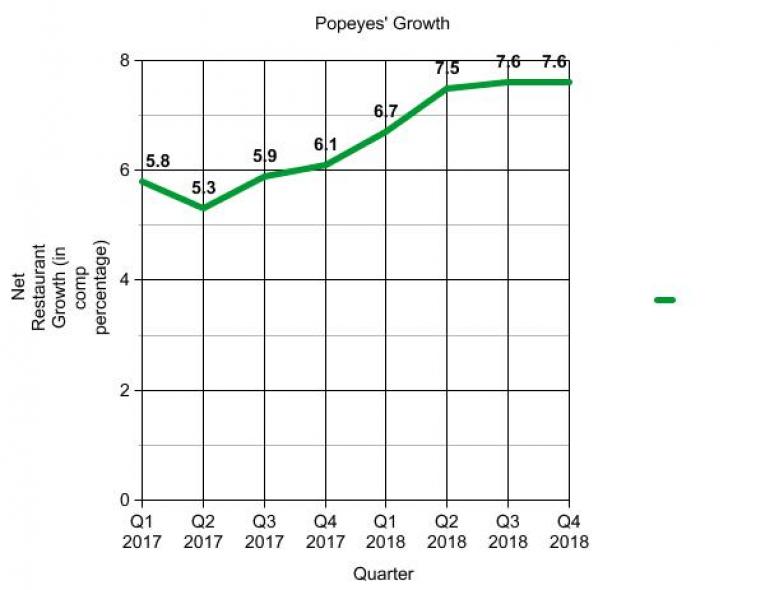 Popeyes opened 216 restaurants the year before RBI jumped in, comprised of 118 domestic and 98 international restaurants. That was on par with the previous year’s 219 total openings. Net, Popeyes opened 158 in 2016 compared to 166 in the prior year.

Below are the same-store sales trends. Thanks to the net restaurant growth in 2018 and 1.6 percent comps gains, systemwide sales were up nearly 9 percent. 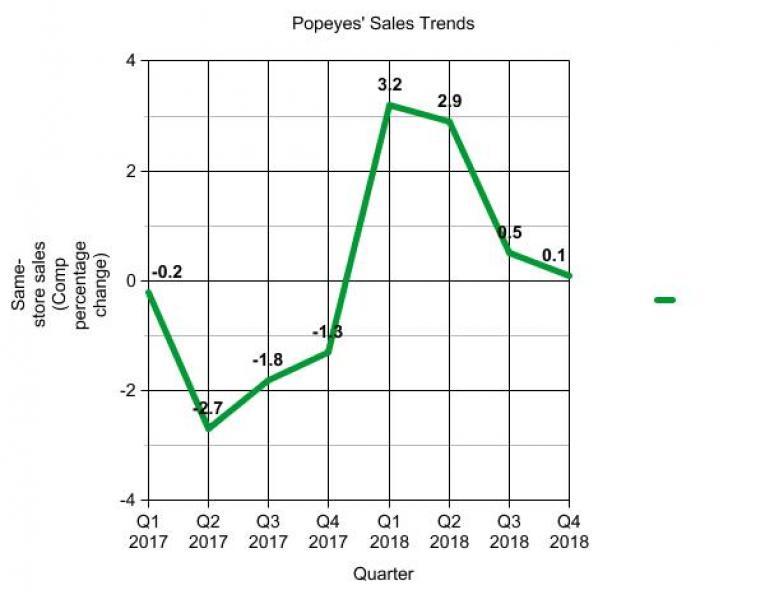 A deeper financial look shows positive change as well. The top-line growth, Schwartz said, coupled with the “effective cost disciple” of RBI’s operational model and systems to scale, resulted in double-digit profitability growth for Popeyes in each quarter of 2018. The chain’s adjusted EBITDA was $157 million, representing a 31 percent organic increase versus the prior year.

But is growth about to ramp up? Following Q4’s results, Schwartz said RBI would “establish partnership to meaningfully accelerate net restaurant growth for Popeyes, including through new international master franchise agreements.”

Last year, RBI signed its first international master franchise deal for Popeyes in Brazil and the Philippines. Schwartz said the full impact of recent partnerships did not reflect in last year’s figures. “In addition to these agreements beginning to translate into further net restaurant growth in the future, we are in active discussions of several prospective partners to develop the brand all around the world,” he said.

The Brazil partner opened their first eight Popeyes in Q4. Schwartz said current and future deals would “set Popeyes up to be one of the fastest growing, global [quick-service restaurant] brands in the world.”

Schwartz said Popeyes’ deceleration in comps on the backend of 2018 was twofold. One, it reflected less impactful limited-time offers. Second, Popeyes experienced “softness in our family layer,” he said.

In December 2018, the brand launched a $20 Holiday Feast to address gaps in Popeyes’ family offerings (an area KFC thrives in). And it saw better same-store sales, as the chart shows, in the month relative to October and November. Heading into 2019, Schwartz said, Popeyes would try to strike a balance across its menu with product and platform innovation “that highlights our culinary traditions, which we believe will drive sustainable comparable sales growth over the long run.”

Popeyes rolled off that deal with no immediate replacement, RBI’s new CEO, Jose Cil said. The brand corrected that in December, and “the business reacted well.” Popeyes is currently working on maintaining a balanced calendar, he added, defined by more impactful LTOs, while maintaining stronger single guest and family bundle offerings. “We think that’s the right formula for the business going forward,” he said.

This past year also saw big change on the tech front. Popeyes rolled out delivery to more than 1,100 U.S. restaurants, or about 50 percent of its system—in just one year. “We have found delivery to be particularly incremental for the Popeyes business. And while delivery now represents a more meaningful portion of our sales in the U.S., we think it could be much bigger still,” Schwartz said.

“We have found delivery to be particularly incremental for the Popeyes business. And while delivery now represents a more meaningful portion of our sales in the U.S., we think it could be much bigger still." — Daniel Schwartz, chairman of RBI.

A less headline-grabbing change, but crucial still, was Popeyes’ progress toward developing two standardized point-of-sale solutions for its U.S. units. Schwartz said nearly 100 percent of its franchisees signed up to implement one of the two options. The terminals, he added, not only give RBI deeper insights into Popeyes’ U.S. stales trends, but they also allow for integrations with other tech initiatives, such as mobile apps.

It will allow RBI to have a better understanding of sales and product mix, too, letting the chain evolve its marketing strategies even further.

Moving forward, as is often the case with growth at this tier, Cil said Popeyes biggest challenge—one he also referred to as “exciting”—is simply building awareness. And a great way to accomplish that is to build more restaurants. That what happened with Burger King years ago, he said, and is currently taking hold at Tim Hortons in several markets. “We think we have really long-term opportunities for growth with Popeyes in many markets internationally,” he said. “…the focus for us is to have great partners, well-capitalize with good teams focused on developing the brands in each of the markets in which we open.”