Dunkin' is seeing some of its best traffic and sales trends in years.

Dunkin’ Brands CEO Dave Hoffmann compared growth in 2019 to the triangle offense, a basketball scheme championed most notably by the 1990s Chicago Bulls.

Instead of Hall-of-Famers Michael Jordan, Scottie Pippen, and Dennis Rodman, though, Dunkin’ points to beverage leadership, food innovation, and consistent value as the key pillars of its blueprint for growth strategy.

In 2020, the company will focus more on that triple threat through a multi-million-dollar investment.

Dunkin’—as part of the push for NextGen remodeling—will shell out roughly $60 million for “state-of-the-art, high-volume” brewing equipment for domestic locations, with matching investments from franchisees, it said. The brewers will allow the brand to expand the variety of drip coffee blends, increase operational efficiencies, reduce waste, and enhance the quality and consistency across the system. This is on top of the new espresso machines installed in 2018 and the new iced coffee brewers in 2019.

The brand ended 2019 with 525 NextGen stores, a redesign including an eight-headed tap system, modern décor, front-counter bakery, efficient coffee line, and enhanced pick-up area. The company expects to end 2020 with 1,400.

“There's a natural momentum with NextGen,” said Scott Murphy, president of Dunkin’ Americas, during the company’s fourth-quarter and annual review. “Once a franchisee has a couple of units open and has worked out any operational kinks, they love it. The crew loves it and importantly the customers love it. NextGen represents our best comp and traffic driver in our system.”

Amid the growth, Dunkin’ will exit and terminate its agreement with 450 Speedway stores along the East Coast. Murphy said those units represented less than 0.5 percent of Dunkin’ domestic sales in 2019. He believes the holes left by these stores will be filled by the chain’s NextGen restaurants. The agreement with the convenience store chain dates back more than a decade ago with Hess Corp. Speedway took over the Dunkin’ locations when it acquired Hess in 2014.

“By exiting these sites, with minimal financial impact, we're confident we'll be better positioned to serve many of these trade areas in the coming years with new Dunkin' NextGen restaurants that offer a broader menu,” said Kate Japson, chief financial officer. 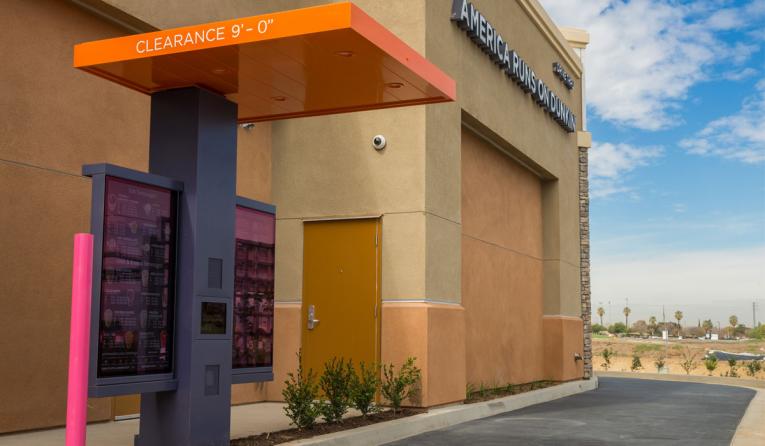 Dunkin' turned in the fastest average time in this year's QSR Drive-Thru Study. 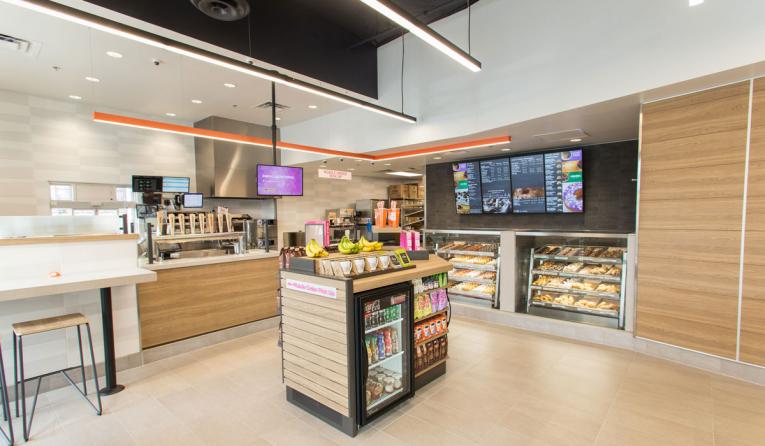 The NextGen design is cleaner and more modern, but also promotes some of Dunkin's other offerings. 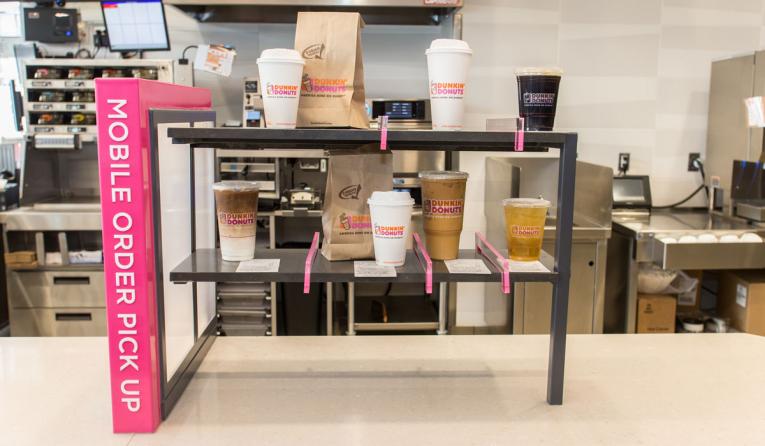 Mobile ordering and pickup are a key element of the new layout.

The negative traffic is still a concern, wrote Peter Saleh, BTIG managing director and restaurants analyst, in a note Friday. Improving those numbers will get trickier as more competition enters, including Wendy’s new breakfast menu next month.

Hoffman said although Dunkin’ traffic remained negative, the numbers were the best the brand has seen in five years. He added his team is “maniacally focused on traffic.”

“Our focus and what we've talked about with the franchisees is just to stay true to our competitive advantage, which is, we have both quality coffee and great food delivered at the speed of Dunkin',” Hoffman said. “And we think we're the only one that can stay claim to that trifecta. So, look, whether its breakfast wars or coffee wars, it's highly competitive out there and we're fighting every day. So, we just look at it. We're not minimizing it. But we're really focused on our competitive advantage and doing what we do best.”

In 2019, Dunkin’ Brands added 211 net domestic Dunkin’ locations, all of which were outside the Northeast. It expects to open between 200 and 250 net units in 2020 and continue that pace in 2021. In Q4, Dunkin’ added a net of 76 domestic and 26 international locations. Baskin-Robbins gained a net of 62 international stores and closed a net of 18 in the U.S.

Q4 comp numbers were fueled by espresso and cold brew sales, the company said, along with the launch of its plant-based Beyond Sausage Sandwich in November and performance of national value platforms. Hoffman reported the Beyond Sausage Sandwich attached well with premium-priced Cold Brew and espresso, resulting in an average check of over $9. Hoffman said the sandwich—combined with its oatmilk latte and upcoming power muffin—will help the brand target health-conscious customers on a budget. The plant-based sandwich skews toward a younger and female demographic, mostly on the East Coast.

Espresso sales grew 40 percent year-over-year and represented roughly 10 percent of sales mix. The return of Peppermint Mocha along with new holiday flavors carried the category and fueled a premium ticket with almost 70 percent attachment. The innovation will continue with the Pink Velvet Macchiato for Valentine’s Day and the Oatmilk Latte in the spring.

As Dunkin’ receives new customers, another objective is to hold onto that crowd via better flexibility. In October, the company allowed DD perk members to earn reward points regardless of how they paid—the first tweak in five years. The brand also let any customer—not just loyalty members—use mobile ordering. It received more than 20 million mobile orders in Q4, a 25 percent increase from 2018. Mobile ordering increased to nearly 5 percent of rooftop transactions in the quarter. Dunkin’ ended 2019 with 13 million loyalty members, a growth of 38 percent from 2018. Members represented 13 percent of rooftop sales in Q4.