The brand’s new Chicken Sandwich has been a massive star for Restaurant Brands International; Burger King’s Impossible Whopper, a little less so. But the company has more up its sleeve for 2020.
Fast Food | February 2020 | Sam Oches

The fanfare around Popeyes’ Chicken Sandwich is more than just buzz. According to parent company Restaurant Brands International’s (RBI) 2019 results, the new menu item was a massive sales boost for the brand—perhaps historically so.

RBI’s consolidated results (including Tim Hortons) saw system-wide sales growth of over 8 percent to $34 billion for the full year. That was helped by 5 percent unit growth on the year, to more than 27,000 restaurants worldwide.

Popeyes’ staggering numbers are no doubt attributable to its massively popular Chicken Sandwich. RBI CEO Jose Cil said on an earnings call Monday that Popeyes’ Q4 performance was a direct result of the product’s November 3 relaunch. The initial launch in early August quickly sold out, but still led to a 10.2 percent same-store sales increase in Q3.

“This has been a very exciting time for the Popeyes team, and in fact, has been an exciting time for all of us who spent a long time in [the quick-service industry] and have never seen the kind of guest response for a single product launch like the one we had for our Popeyes Chicken Sandwich,” Cil said on the call.

Popeyes rode momentum from the initial August launch into an event bigger relaunch, complete with a wildly successful social media campaign. Cil said that during the relaunch in November, Popeyes was at one point the top-trending news on Twitter and the top search on Google. He added that it led to “billions of media impressions and generated earned media worth considerably more than the size of our entire annual U.S. ad fund spend.”

Those impressions clearly worked; foot traffic analytics platform Placer.ai reported ahead of RBI’s sales report that Popeyes’ November visits were 114.8 percent above the company’s baseline. And in comparing all of 2018’s visits to 2019, the brand saw a traffic increase of 26.8 percent for the year. On Friday, January 17, visits rose 59.3 percent above the baseline for the period between January 1, 2017 and January 20, 2020, according to the platform. Analyzing that same period, every week in January came in at least 20 percent or more above the baseline for weekly traffic.

Even better news for Popeyes? The Chicken Sandwich’s success appears to be a rising tide lifting all boats on the brand’s menu. 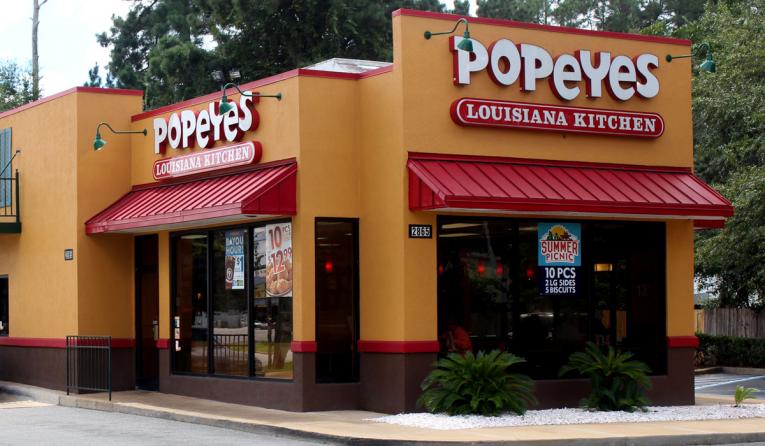 Popeyes is ramping up delivery efforts as its sales explode.

While we're very encouraged that the Chicken Sandwich was an important driver of sales in the fourth quarter, our other core offerings also performed very well,” Cil said. “And for the vast majority of our guests purchasing the sandwich, we saw that they actually spent more on other products than on the sandwich itself, resulting in very healthy check levels and incredibly valuable awareness in trial.”

The CEO thinks this momentum can carry Popeyes into an entirely new stratosphere within the quick-service industry. He said there is opportunity in the coming years to turn Popeyes “from a brand with cult status into a true mainstream player in the U.S.”

Reaching that goal could start with off-premises growth; RBI chief operating officer Joshua Kobza reported during the earnings call that Popeyes had “ramped up delivery significantly in the U.S. to over 1,600 restaurants and drove its strong increase in sales this year, especially following our highly successful Migos promotion,” he said, noting the company’s partnership with hip-hop artist Migos that offered an exclusive “Migos Menu” via Uber Eats. “Today, delivery at Popeyes in the U.S. represents about a $250 million business on an annualized basis.”

Burger King: “A new platform for the brand”

While Burger King’s growth for 2019 and Q4 in particular was more meager than Popeyes’, the company reported incremental sales from the meatless Impossible Whopper—plus, perhaps more importantly, the potential to further develop plant-based offerings. Cil said the product had “strong performance” for the year despite a deceleration in comparable sales growth from Q3 to Q4.

“Given the sustained performance of the Impossible Whopper, we're confident that plant-based food represents a new platform for the brand and one that we can build into new occasions, dayparts, products, and proteins,” Cil said. “The product clearly resonates with our guests and we plan to invest behind our leadership in the fast-growing plant-based segment.”

The bigger opportunities for Burger King may be in its international business and its branding and technology makeover. 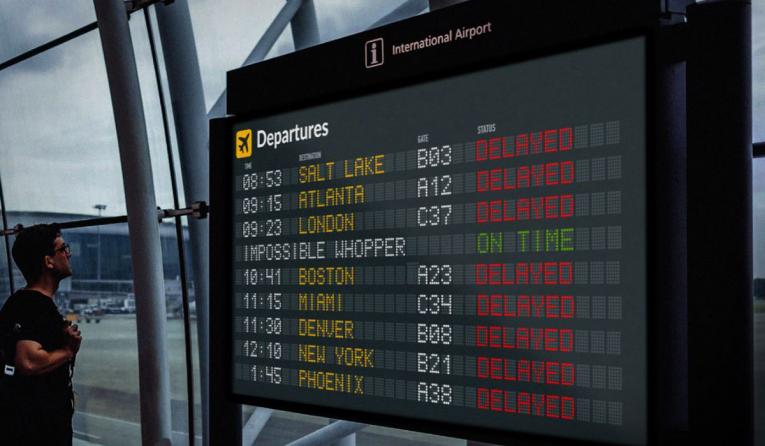 Burger King has rolled out not shortage of interesting promotions for the Impossible Whopper, like this giveaway program for airport guests.

“With system-wide sales of nearly $13 billion, up from $8 billion five years ago, our international business now represents a majority of Burger King global sales,” Cil said.

And Cil said much progress has been made on Burger King’s transition to its “Burger King of Tomorrow” image, a store refresh that includes new interior and exterior designs, double drive-thru lanes, outdoor digital menuboards, and in-restaurant self-order kiosks. More than 800 restaurants were converted to the model in 2019, Cil said, slightly ahead of its target. He added that the company is “targeting underperforming restaurants with average sales of about $850,000 for closure and replacing them with brand new Burger King of Tomorrow restaurants, which have averaged over $1.4 million in sales.”

COO Kobza said that Burger King and Tim Hortons are in the midst of drive-thru evolutions that include the roll out of digital menuboards featuring dynamic content offering guests “more location or situationally appropriate menu suggestions as well as personalized offers.”

“All of these initiatives ladder up to our big priority, which is to drive the penetration of digital sales across each of our brands,” Kobza said. “It's our view that future success in our space will be increasingly dependent on digital capabilities and platforms. So it's critical to establish our brands as leaders in their segments, particularly with younger guests, as we navigate the digital transformation of [quick service].”