Is Pizza Entering a Golden Age in Quick Service?

Industry data shows the segment is outperforming all others.
Finance | April 2018 | Danny Klein

Are we entering a golden age for pizza? It seems a real possibility, according to data from BDO’s The Counter, an industry benchmarking update that tracks publicly traded restaurant companies.

In a year where same-store sales were flat, with no change over 2016, pizza brands outperformed all other sectors. Comps gained 2.9 percent through the fourth quarter. While slower that the previous year’s 4.6 percent increase, stacked on a two-year basis the segment is sizzling, especially measured against BDO’s other tracked categories: quick service (0.8 percent), fast casual (negative 1.6 percent), casual (flat), and upscale casual (negative 0.1 percent).

It’s worth noting that BDO’s data comes from only publicly traded units. So these figures don’t include many of the fast-casual pizza players igniting the scene. Like MOD Pizza, for example, which added 110 locations in 2017 and grew same-store sales by 5.2 percent, and hit systemwide sales of $275 million—a year-over-year increase of 81 percent.

BDO’s data was anchored by the performance of Domino's, which despite some slowdown late in the year, grew its comps 8.7 percent in 2017. Company-owned locations clocked 3.8 percent growth and 4.2 percent at franchise stores in Q4. In fiscal 2017, the company opened 1,045 net new stores, comprised of 216 net new domestic stores and 829 net new international stores.

Pizza Hut had a breakthrough finish to what’s been a transformation stretch, posting 1 percent growth (2 percent in the U.S.) in Q4 and notched back-to-back growth quarters after five consecutive periods of declining sales. For the year, Pizza Hut opened 826 new international restaurants in 77 countries, including 592 units in emerging markets.

“While 2017 was not the best year for same-store sales in the pizza segment, it still outperformed all other segments,” he says. “The ‘slow down’ in the segment’s growth can be attributed to more competition across the board, but pizza concepts remained at an advantage as consumers continue to be attracted to quick and easy-to-go meals.” 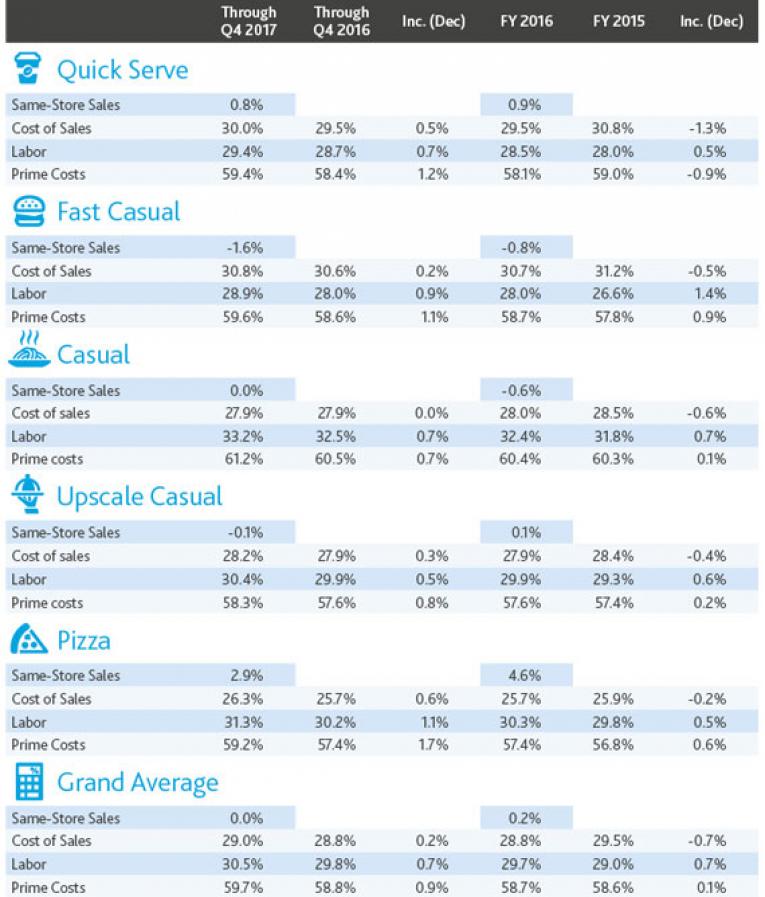 “I anticipate that the pizza segment in 2018 will continue to see same-store sales growth that outperforms others,” he adds. “Both Blaze Pizza and Mod Pizza, for instance, are on many of restaurant industry’s fastest-growing concept lists. Pizza also surpasses others in meeting consumer demands by utilizing technology for ease of online ordering and delivery.”

Blaze, by the way, grew its revenue 51 percent in 2017 and said it has franchise agreements in place to develop more than 400 additional locations across the U.S., Canada, the Middle East, and Northern Africa. The 256-unit brand hopes to have 1,000 restaurants and $1 billion in annual systemwide sales within 4–­7 years. It opened 66 restaurants in 2017, achieved comps growth of 3.7 percent, and boosted average-unit volumes to $1.4 million.

Taco Bell and McDonald’s are two brands leading the value charge right now. Taco Bell’s Nacho Fries release in January was the company’s most successful product launch ever. CNBC reported that from January 25 to the middle of March, the company sold more than 53 million orders. Taco Bell has continued to add to its $1 menu since and said it plans to roll out 20 new discounted items this year.

McDonald’s $1 $2 $3 Dollar Menu broke out the gates with mixed results in January, but offers flexibility and possibility for the fast-food chain moving forward, especially in regards to its barbell approach to premium offerings that has proven successful in recent history. Its McCafe lineup and Signature Crafted premium sandwich platform were cited by executives as key drivers to comps growth in 2017. McDonald’s fourth-quarter same-store sales lifted 4.5 percent in the U.S. For fiscal 2017, McDonald’s global comparable sales climbed 5.3 percent, giving the company its best sales performance in six years. Systemwide sales were up 7 percent and McDonald’s reported positive guest counts in all segments.

Fast casual’s struggles on the publicly traded side continued. Like pizza, this is a segment with a heavy privately held presence. But unlike pizza, the public chains aren’t lighting up sales. Chipotle reported a 6.4 percent increase against 2016’s 20.4 percent drop. The brand reports first-quarter results Wednesday and investors will be eager to learn of new CEO Brian Niccol’s plans. The former Taco Bell leader joined the company in early March.

Taco Cabana (7.3 percent decline) and Pollo Tropical (6.5 percent fall) had challenging years. Both were affected by hurricane activity and are in the process of a “Strategic Renewal Plan.” For the fiscal year, parent Fiesta Restaurant Group reported a loss of $26.2 million, or $1.35 per share. Revenue, which was $162.2 million in the fourth quarter, came in at $669.1 million for the full year. The company reported a fourth-quarter loss of $10.8 million after posting a profit in the same period a year ago.

Better days could be ahead, however. Pollo Tropical relaunched its brand in October and Taco Cabana, execs said, was up next.

Upscale casual and casual reported flat results for the year at 0.1 percent and 0 percent, respectively. Texas Roadhouse topped the category with 4.5 percent growth for the year. Applebee’s (negative 5.3 percent) was on the other side, while Eddie V’s comps rose 4.3 percent through Q4. Sullivan’s Steakhouse posted a 6.3 percent drop.

There’s reason to think positively in regards to Applebee’s. Parent company DineEquity rebranded to Dine Brands in the fourth quarter. This news came with positive same-store sales of 1.3 percent in Q4. They dropped 0.4 percent at IHOP, year-over-year. The casual-dining leader is forging ahead, though, with a restructured leadership team and a commitment to off-premise, value, and its core guest. Read more about the process here.

You can also dive into Texas Roadhouse’s impressive consistency in this story.

Sullivan’s, meanwhile, has been rumored as a sales candidate for Del Frisco’s Restaurant Group. Chief executive officer Norman Abdallah said in March that: “While Sullivan’s Steakhouse has many compelling attributes, we believe that Del Frisco’s Double Eagle Steakhouse and Del Frisco’s Grille provide us with far greater opportunities for expansion,” and “that "We have now reached the conclusion in consultation with our board, to consider strategic options for Sullivan's Steakhouse including a potential sale of the brand.” Sullivan’s comparable same-store sales plummeted 10.8 percent in the fourth quarter, year-over-year, driven down mainly by a 15.5 percent decrease in customer counts. 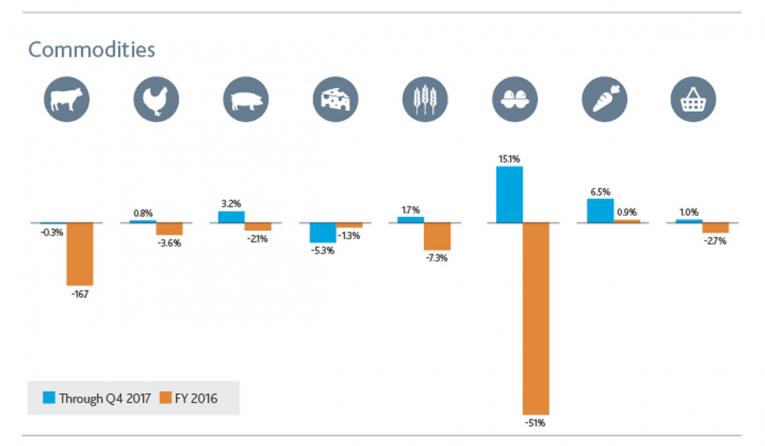 BDO’s data also tracks other categories of interest, including commodities and cost of sales.

In 2017, cost of sales reached 29 percent, a slight uptick from 28.8 percent in 2016. Each segment saw modest increases, except for the casual category, where cost of sales was flat.

On the labor front, costs lifted 0.7 percentage points over 2016. “High turnover and increasing costs continue to challenge the restaurant industry, where lukewarm sales results mean that each piece of the profitability puzzle must be scrutinized,” the report said. “As conversations over increasing the minimum wage continue in many states, the March 2018 omnibus spending bill brought the question over tip pooling policies to a close.”

In addition, BDO provided a look ahead. It surveyed 1,000 consumers to gauge the impact of tax reform on their bottom lines. Only 30 percent said they have noticed a positive change in their take-home pay.

“This suggests that most consumers may not be feeling a significant difference in their disposable income that would spark them to spend more in restaurants. On the other hand, 60 percent say they are likely to spend increased take-home pay on food, which would include grocery and restaurant purchases,” BDO said.

BDO is predicting that the tax cuts for individuals could contribute to a 1 percent increase in 2018 same-store sales. Brands will also continue to report savings from the reform. McDonald’s, for one example, said it plans to invest about $2.4 billion of capital in 2018, and $150 million to employee education over a five-year span.