New owners say it has the ‘best economics they've ever seen.’

After five years in business, a major growth phase is underway for Seven Brew Drive-Thru Coffee.

Seven Brew plans to use the injection of cash to initiate a franchise program, something Liautaud and Coulter are quite familiar with. Liautaud founded Jimmy John’s in 1983 and led the company until October 2019, when it was acquired by Inspire Brands. The chain now has more than 2,800 locations across the U.S. Coulter, previously a Pizza Hut franchisee, met Liautaud a few decades ago and mentored him as he grew Jimmy John’s. They plan to assist Seven Brew with opening company-run and franchise stores in new and existing markets.

Seven Brew is plotting growth in a category that’s as competitive as ever. In March 2018, Scooter’s Coffee partnered with McCarthy Capital to fuel expansion. At the time, the chain had roughly 180 locations—that has since ballooned to more than 300. Scooter’s recently inked a deal to add two dozen locations in Oklahoma. Additionally, in October 2018, Dutch Bros Coffee received an investment from TSG Consumer Partners. The chain has more than 400 locations and 14,000 employees across 10 states. There’s also PJ’s Coffee, which has more than 125 stores and commitments to open 28 more across four states in the next two to three years.

Despite the stiff competition, Liautaud said the drive-thru category is “ripe for reinvention and rapid growth.” Drive-thru proved to be a significant boost for quick-service chains in 2020. The channel went from increasing orders by 4 percent in January 2020 to 22 percent in December, according to the NPD Group. By the end of the year, it mixed 44 percent among off-premises orders.

Liautaud believes Seven Brew is in position to disrupt and lead the accelerating revenue stream.

"We admire the Brew Crew’s passion toward fearlessly exploring new ideas, ingredients, and connections that help us learn more about ourselves, each other, and our communities,” Liautaud said in a statement.

Evan Grisham, Seven Brew’s president and director of franchising, spoke to QSR about the investment, and what the future holds for Seven Brew.

How is the company performing in the current environment?

Seven Brew continues to delight our existing repeat and new customers alike, and the business is performing extremely well as a result. Our employees operated safely and diligently throughout the challenges of 2020, and we saw very strong growth, with that momentum exploding into this year. We opened our ninth corporate location in Missouri in February of this year, and it was welcomed by the community with open arms, and surpassed our already high expectations. And we'll be opening several other corporate-owned locations, several of which are currently under construction. And we're looking forward to bringing our delicious drinks menu and unique experience to more and more communities, including in partnership with franchisees across the country.

Explain the culture of your company, and how “cultivating kindness” fits the core mission?

Seven Brew’s culture is our greatest asset. It starts with our valued “brewistas,” as we call them, starts with their talents, energy and attention to detail, which enables consistent quality across the thousands of unique drinks that our menu features. And it continues with a fast, fun, and unique customer experience. Cultivating kindness is our mission statement that embodies all of that. It's a genuine friendly conversation while placing your order or maybe tapping along to a newly discovered song while you're in line. When folks are taking their first sip or thousandth sip of a Seven Brew beverage while pulling away, their day is brightened. And that's cultivating kindness. 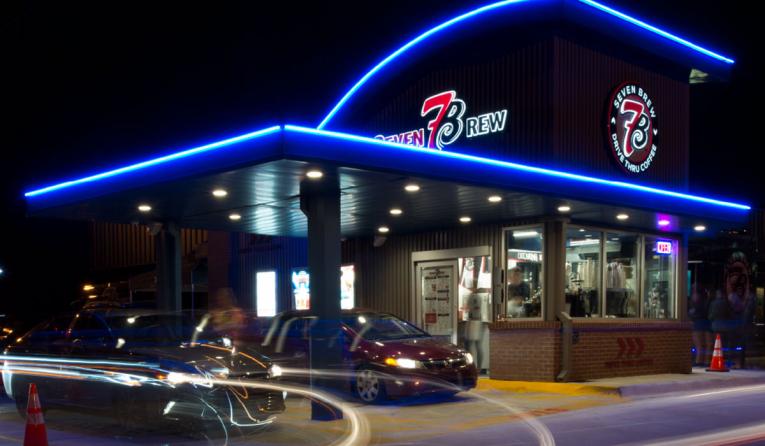 Seven Brew wants to be a category leader and a globally recognized brand.

Describe the background behind how the deal with Drink House Holdings began?

Jimmy and Jamie discovered Seven Brew, and they were impressed with the brand foundation that had been laid. Thereafter a conversation ensued around Drink House Holdings acquiring the business to grow it more quickly. And we've been off to the races since that acquisition.

Describe how Seven Brew will implement its franchise strategy? How do you want to grow and where?

We're actively having discussions with institutional and independent franchise partners. The concept appeals to a wide-ranging set of demographics. So we're exploring the possibility of franchise locations throughout the U.S.

What do you think attracted Jimmy John and Jamie to Seven Brew?

Both Jimmy John and Jamie looked at the model and decided to put their efforts and investment behind it. Because in their words, it's the most robust concept they have seen poised for growth, with the best economics they've ever seen or been a part of.

Aside from unit growth, in what other ways will Drink House Holdings’ investment assist the company?

Both Jimmy and Jamie bring a combination of operating, investing, real estate, financial, and transaction experience, and just a wealth of experience on the institutional level. And their input and guidance will be invaluable for us as we grow this brand.

Are there any short-term or long-term goals for the pace of Seven Brew’s growth?

In the short term, our goal is to leverage the best-in-class foundation we put in place to grow the brand rapidly. And in the long term, we believe Seven Brew will be a category leader and a globally recognized brand.

How do you expect Seven Brew to be positioned in the post-pandemic era when COVID subsides?

Our drive-thru format will continue to gain share in Seven Brew’s position to disrupt and lead in drive-thru and beyond.