The fight for customers in the quick-service industry went digital years ago, but it’s often hard to determine which brand is winning the fight. Is preeminence determined by follower count, interactions online, concrete benefits from digital engagement, or something else entirely? Is it just about having a funny Twitter account?

ShareIQ, a platform for measuring earned media performance, recently released research that stacked the biggest quick-serves against each other in search of social media domination. The $200 billion industry is heavily divided, but ShareIQ’s research focused on the major players: McDonalds, Subway, Taco Bell, Burger King, Wendy’s, Chick-fil-A, and Domino’s.

The survey looked exclusively at online engagements and found different leaders on different social media platforms. On Facebook, Taco Bell was the clear winner. The brand notched 29 times the amount of engagement as Wendy’s, totaling nearly 500,000 reactions of the more than 1.1 million total interactions split between the seven brands on the platform.

On Instagram, it was a different story. Domino’s was the clear winner with 1.4 million likes between the start of the year and April 2. Again, Wendy’s was the laggard among the seven brands studied, totaling just more than 125,000 likes on the photo-sharing app. McDonalds was sixth with about 197,000 likes earned. The next closest competitor, Taco Bell, totaled more than 300,000 likes over that three-month period. 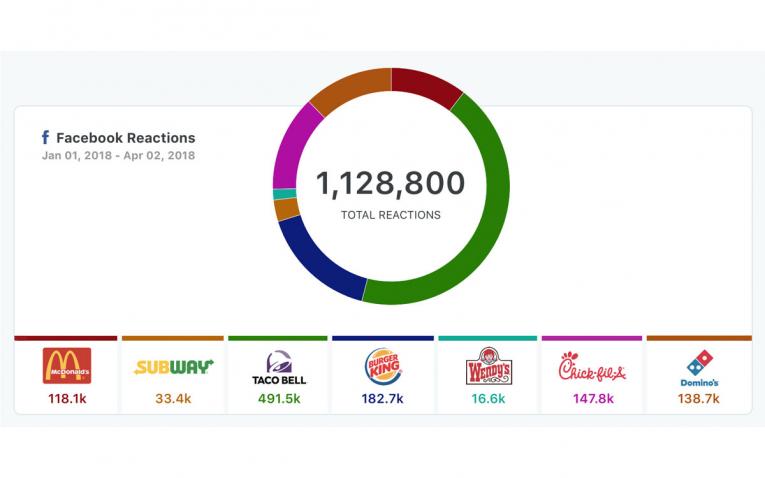 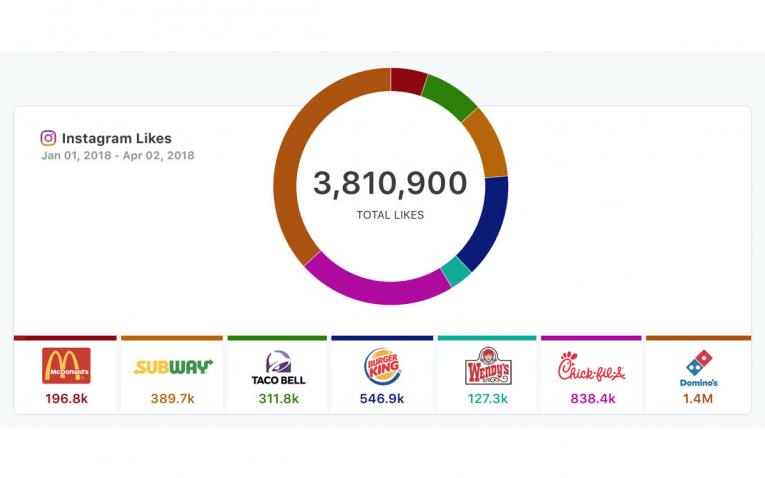 While Domino’s dominates Instagram by the numbers, Chick-fil-A leads all brands in engagement rate, the percentage of followers that engage with content. The chicken leader’s engagement rate is 2.86 percent, nearly three times more than Subway’s and Domino’s.

The pizza giant’s Instagram strategy focuses on a food overload, hoping to trigger appetites with a steady stream of fresh pies flowing through users’ feeds.

Meanwhile, Taco Bell is the undisputed champion on Facebook, earning an engagement rate a full 69 times higher than Subway’s on Facebook, the largest social media platform on the planet.

Wendy’s struggled overall due to infrequent posting on Instagram and Facebook, but it’s telling that the study did not measure Twitter presence. This seems to be where Wendy’s thrives and interacts with the most customers—the burger brand is known for its conversational, youthful tweets, starting beef with other burger brands, and even dropping mixtapes.

“The brand focuses heavily on products, with very few people and almost no lifestyle content in their social media images,” ShareIQ released in its report. “Their product content is not stylized, but presents a corporate-looking brochure-like aesthetic.”

Meanwhile, McDonalds was rewarded for featuring almost exclusively video content. This strategy has successfully driven engagement for promotions like the return of a special Szechuan Sauce from the release of Disney’s Mulan, a craze that was inspired by the TV show “Rick and Morty.” The promotion was so successful that McDonalds locations nationwide had to turn hordes of customers away and restock months later.

While the study didn’t measure Twitter engagement, the findings can inform quick-service players on how to interact with fans on social media. But a few keys were made apparent by the ShareIQ study: digital consumers want their content to be fresh, ideally in the form of a video, with style and incentives, products, are humor that will entice them into clicking further into the issue.