Domino's soared on the stock market following its fourth-quarter report.

The delivery world as Domino’s sees it today: There is a huge increase taking place across the restaurant landscape, thanks to third-party platforms and the rise of convenience. But are incremental transactions truly rolling in for operators? CEO Ritch Allison doesn’t think so, and it’s forged an interesting competitive dynamic for quick-serves, especially those that deliver pizza.

It’s a shift across channels, Allison said. And one with a trap waiting. In high-wage markets, if fast-food brands continue to trade drive-thru or pick-up business for delivery, they’re going to move customers to a higher-cost channel to serve. That’s where the profitability question surfaces.

“So, when we think about how we're going to grow our business and continue to have a very profitable base of franchisees, we’ve got to hold, serve, and defend that delivery side of the business,” Allison said during Domino’s fourth-quarter and full-year review. “But we are pushing hard on carryout because as you approach $13, $14, $15, $16 an hour labor, that carryout business becomes the profit engine over time.”

Domino’s efforts in recent months, including the emphatic rejection of third-party delivery, appear to be gaining ground. Shares shot up 25 percent on the stock market Thursday, among the highest one-day surges in the company’s history.

Domino’s domestic Q4 same-store sales rose 3.4 percent off last year’s jump of 5.6 percent—the first accelerated result in six periods. It gave Domino’s 35 straight quarters of U.S. comps growth. And with international gains of 1.7 percent, the streak on that side is up to 104.

Operating margins also checked in at 17.7 percent and revenue hiked 6.5 percent to $1.15 billion, sailing consensus estimates by $20 million. Non-GAAP earnings per share of $3.13 topped by 16 cents.

The most impressive element of this, however, is the fact Domino’s closed only 15 U.S. locations in all of 2019 and has shuttered fewer than 100 total in the past five years combined. This past fiscal calendar, the chain closed 83 international units on a base of nearly 11,000. If you add that to its U.S. movement, Domino’s was sub-100 closures for a 17,000-store global brand.

Getting back to carryout

The segment’s evolution dominated much of Thursday’s call. CFO Jeffrey Lawrence said carryout “just was on fire, in a great way,” in Q4, leading Domino’s to lean hard into the strategy. To give “our franchise operators the tools and the technology to really make the most of it,” he said.

“It’s what a big cross-section of our customers really want,” Lawrence added. “We’re getting better at carryout every day and that focus on it, and we really saw a big surge in the comp for carryout.” 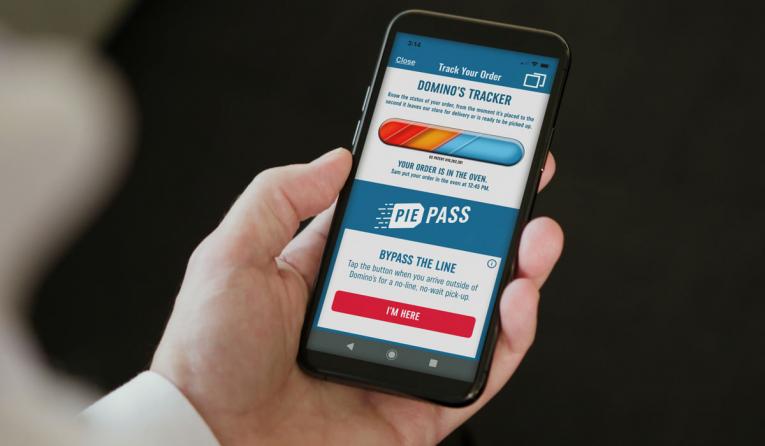 So, what does this path forward look like exactly? It works across multiple fronts for Domino’s.

But perhaps the best place to begin is real estate. By clustering markets in a continual “fortressing” strategy, the chain guards against third-party intrusion by shrinking delivery radiuses and improving consistency, delivery times, and lowering costs. The most expensive thing Domino’s does, though, from a labor perspective, is take pizzas from point A to point B. Fortressing eases wage rates by improving, over time, the number of deliveries per driver, per hour, franchisees can leverage. Domino’s sees a reduction of about 2 minutes on average in delivery times in these fortressed territories. (Here's more on the strategy and some examples of why it's working for Domino's).

He suggested people sometimes conflate carryout and delivery, but Domino’s research shows a carryout customer is “absolutely different” than a delivery one. “The carryout in the new store, the fortress store, almost 100 percent, more than 90 percent incremental,” Allison said.

“We are reaching customers that simply weren't enjoying the Domino's brand there. So that's a really important part of the financial equation to get those franchisees excited about the investment opportunity.”

With delivery as it relates to fortressing, Domino’s picks up new addresses thanks to more stores, yet they’re mostly shifting from an old restaurant to a new one; the brand is simply getting the food there with better service times. Carryout welcomes a totally new customer.

The value proposition is different, too. Domino’s touts a $7.99 large, three-topping carryout special, available very day of the week. The hero offer for delivery is $5.99 mix and match.

Earlier this week, Domino’s started running adds around new “Pie Pass” technology. It brings personalization to carryout by greeting guests by name on digital menuboards when they walk in.

Customers order and pay online, or through Domino’s app, and show up at a designated time, avoiding lines. SVP and chief innovation officer, Dennis Maloney, called it “the ultimate VIP carryout experience where customers don’t have to be a regular customer to be treated like one.”

Consumers can also check into the Domino’s Tacker or order confirmation page when they arrive to make sure their order is ready to go. The brand rolled out TV ads starring Norm from “Cheers.”

Domino’s has ramped up messaging around carryout in other ways throughout this past year. It expanded the $7.99 construct toward the end of 2019 to include all five of its crust types.

And this is only going to get deeper. “Because we see it as a huge opportunity for us,” Allison said.

Carryout is two-and-half times the number of transactions for Domino’s compared to its domestic delivery segment. More than 600 of the chain’s U.S. stores now feature pickup windows.

There is also room to grow with digital adoption, a place Domino’s has proven more adept than almost any restaurant chain in America. The brand currently sees a run rate of about 70 percent digital sales—75 percent in some urban markets. But its far more entrenched on the delivery side. Carryout guests still call the store, in other words. Hence, the Pie Pass introduction. “There are other things that our teams are working on and investing in here because we do see that as a great opportunity to help us to continue to drive that business, not only order counts, but also giving us an opportunity for smarter upsells and other things that help us drive smart ticket in the business,” Allison said. 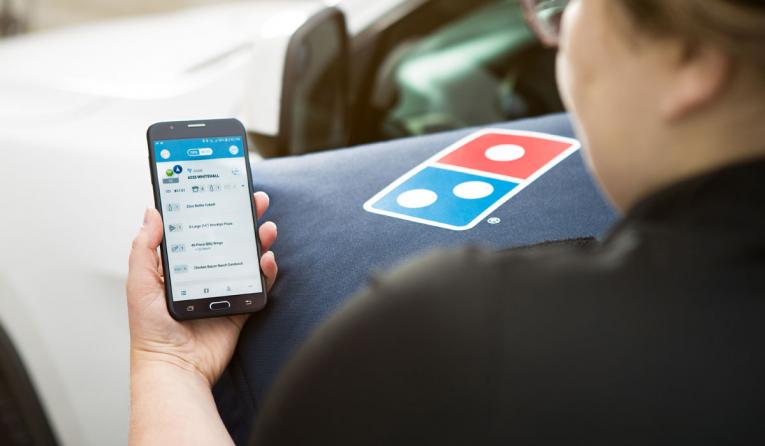 Domino's GPS tracking is now being used in about half of the brand's domestic stores.

The delivery firing squad, and Domino’s provides a lens into menu innovation

Another reason Domino’s enjoyed one of its best quarters in recent memory had to do aggregator activity leveling off. At least to some degree.

Relative to the second half of 2018 and the first of 2019, when the industry witnessed a significant push of aggregators into new cities and intense, incremental advertising spend, this past quarter was somewhat muted. Allison said there wasn’t as much of a ramp-up. The pressure is still there, it just didn’t elevate from Q3 like it had been.

The metaphor Allison shared was to picture third-party delivery companies standing in a circular firing squad. “And they are going to continue to keep advertising, going to continue to keep discounting because I don't think they have any choice. And so, we expect—while we're not in the middle of the firing squad—we might get hit by a few stray bullets along the way,” he said.

“And we just don't know exactly yet how to quantify that.”

Domino’s custom-built GPS technology, which started to roll in December, is now in use at more than half of the company’s U.S. locations. There’s a current ad supporting that as well—an offbeat take on “Risky Business.”

Allison said Domino’s is getting positive feedback from operators because it’s helping them manage “what is a really complex process around getting food out of the store and to customers.”

They now understand where the drivers are, when they are close to the restaurant in terms of returns, and enables the store to get pizzas ready and out the door quickly. It’s helped lower turn times a bit. The big unlock, though, comes on the back-end. For consumers, GPS technology was really something Domino’s had to unveil to get on even ground with competitors, like Uber. The real benefit is inside restaurants, Allison said. There, it changes the way Domino’s operates and runs the delivery business for managers and drivers. Historically, a driver needed 3–6 months to learn a delivery area, he said. “Well, we can accelerate the training of those drivers with GPS in hand. They already know the fastest route to get a pizza to our customers. So more to come on that. It's still early, but I'm excited about where we are today.”

Domino’s hasn’t launched a new menu item since Bread Twists in June 2017. BTIG analyst Peter Saleh predicted earlier in the year the chain might be on the verge of changing that. Doing so “could reignite order growth and be a catalyst for stronger comparable sales as the year progresses,” he said.

Allison reveled on Thursday, “We're also excited to deliver some new menu news this year and look for that to come this summer.”

He then went into why Domino’s has kept its culinary efforts limited over the past couple of years.

And it comes down to more than just strong consumer appeal. “A lot of brands will measure success of a new product by what mix that product gets post release. We actually take a look at it a little differently and we measure success based on the incremental profit because a lot of the products that we launch,” he said.

Using salad as an example, Domino’s didn’t launch them to sell salads, Allison said. They did so to sell more pizza.

“That's the lens that we look through,” he said. “So our testing processes start, obviously, with the consumer and the appeal there. But really, what we're looking for is, what will the overall behavior of that customer be? Will it drive incremental traffic into our stores? And what happens with ticket as well? Will it add additional items to the basket that ultimately help the profitability of the franchisees? And it's why we don't launch that many new products because when we go down into the test kitchen.”