The reenergized story of Papa Johns has been told often in the past two years. Sales split myth from reality, with a two-year comparable stack of 30.7 fueling record growth, quarter after quarter, and plenty of potential yet to chase, including the largest domestic deal struck in brand history. But, until Tuesday, it’s generally been an inward exchange. Amplify the message of “Better Ingredients. Better Pizza.” Bring to market menu innovations absent before CEO Rob Lynch joined in 2019. Strike tech partnerships (third party). Improve unit-level economics for franchisees. Double rewards members from 12 to 22 million in roughly 24 months.

All of these upward events sparked enthusiasm within Papa Johns' base, as evident with renewed growth, and outside it, per the aforementioned historic agreement. Also, the brand’s stock climbed from $62 a share on November 11, 2019, to north of $130 as of midday Monday. So investors are optimistic as well.

All of that momentum, however, is about to come to life. Papa Johns on Tuesday unveiled a fresh logo (yes, the apostrophe is gone) and visual brand identity, as well as a customer-centric restaurant design that offers a streamlined, flexible environment for operators to capitalize on a changing restaurant world.

“Better has always been at the core of what we do at Papa Johns,” says Kate Carpenter, senior director, advertising and design, who has been with the company seven months after a decade-long run at Coca-Cola. “In this next chapter, we are going to continue that focus on being ‘Hungry for Better.’ And that means challenging where we are and evolving to meet the needs of today and tomorrow.”

Can Papa John’s Be as Big as Domino’s?

To Carpenter’s notion, the new brand identity centers on Papa Johns' premium-ingredient platform. It’s the DNA Lynch zeroed in on when he left Arby’s for the position. As he told QSR earlier in the year, “It was in that meeting, in that first week, where we made a strategic decision that we were going to get back to what had originally made the brand great.” Things like garlic dipping sauce and the pepperoncinis guests expect in each box. Papa Johns' six-ingredient, never-frozen original pizza dough.

The brand went as far in this effort as redesigning its typography to create a custom font inspired by the way dough moves and stretches when employees make pizza. The updated color palette includes hues like “Tangy tomato,” “Fresh basil,” “Fluffy dough,” which is off-white, “Punchy garlic,” a light purple, and “Pickled pepperoncini,” a bright, yellow-green.

“We'll be using these illustrations as touchpoints along the customer journey as they choose and order and actually receive our products,” Carpenter says. This means packaging, website and app, social media, and advertising. “There’s still so much more to come because this is the first step in a new phase of the Papa Johns brand,” she adds. “And we’re really just getting started.”

The store design pops all of these colors and imagery, including “photos celebrating the best pizza moments—the ones shared with others,” and what it takes for employees to craft orders. Expect massive shots of ingredients, like mushrooms and pepperoncinis.

“The interior design features elements intended to indulge the senses and provide visual cues that will reinforce those crafted premium quality products Papa Johns is known for,” Carpenter says.

“We wanted a fresh take on premium within the [quick-service restaurant] category,” she adds. “So where better to draw that inspiration than our premium ingredients?” 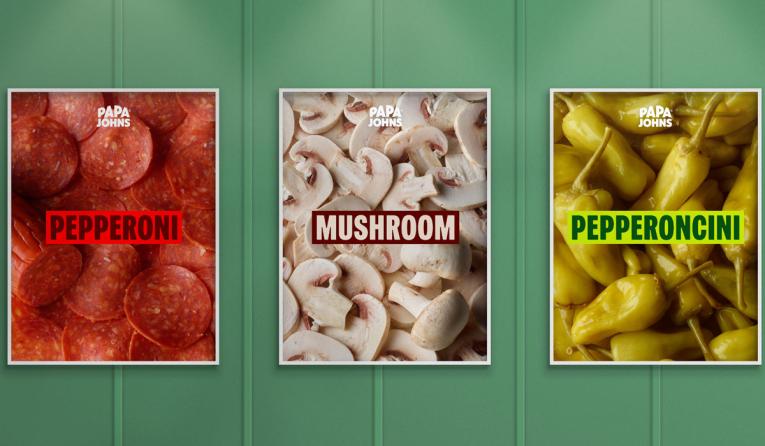 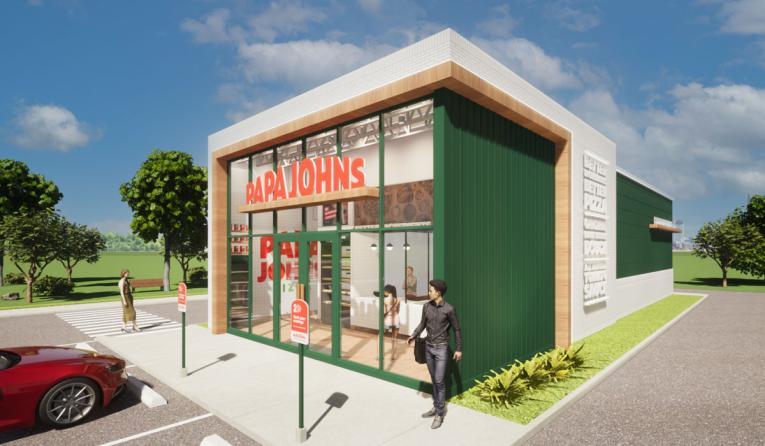 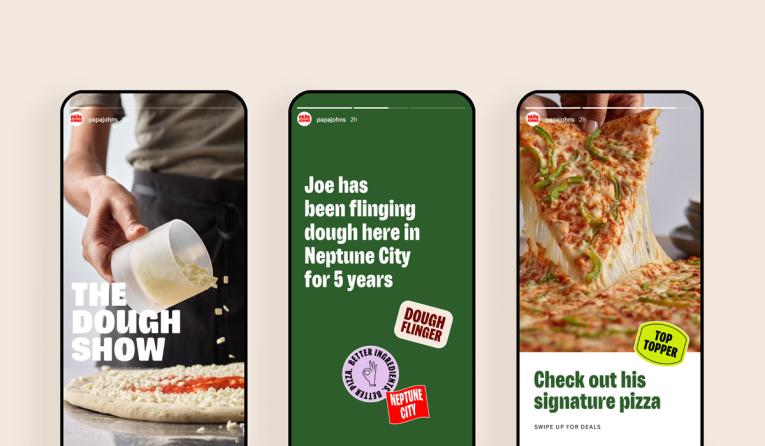 A message all about what makes Papa Johns, Papa Johns. 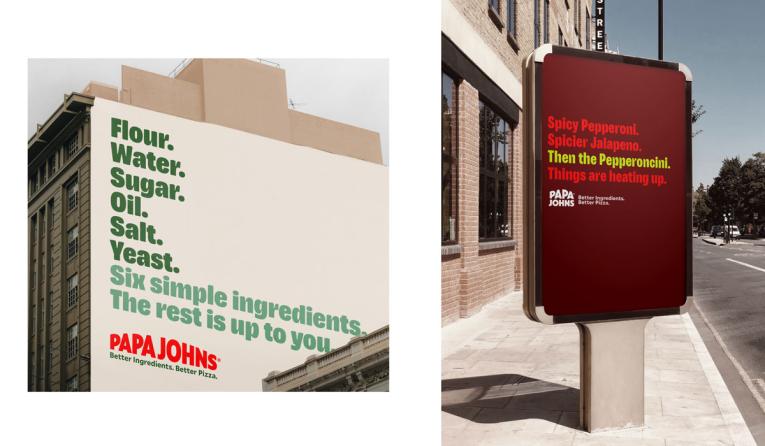 Expect to see the messaging unfold in a variety of mediums. 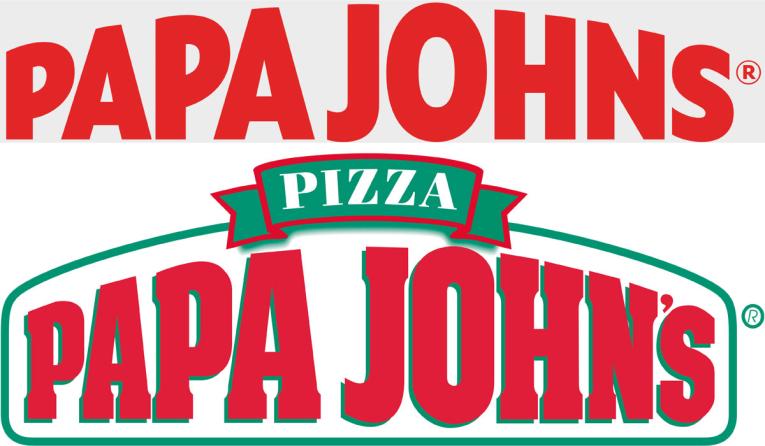 New logo above, old logo below. 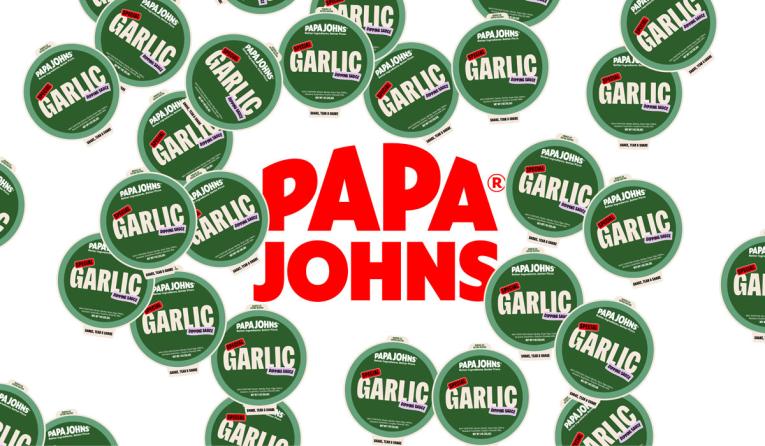 Another example of Papa Johns' fresh logo in action. 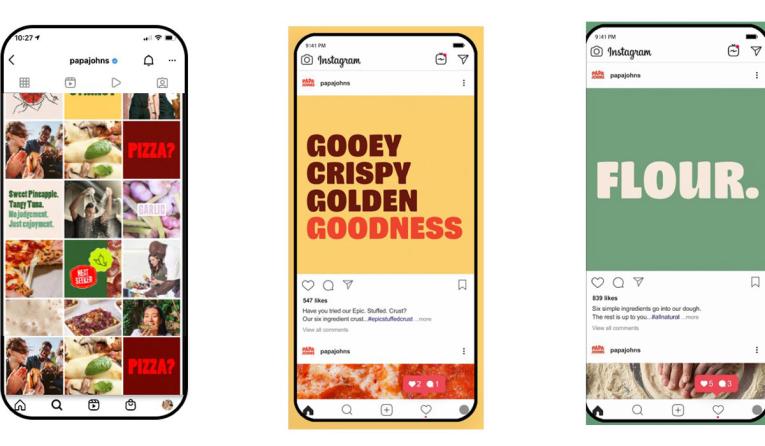 Papa Johns' social will reflect the refreshed vibe, too.

Operationally, there’s a clear focus on purchasing and pickup experiences anchored by an open floorplan. Inside, Papa John's added a pickup counter, which now boasts a self-service option for guests to grab their orders without waiting in line. Some also feature “Drive-Up Pick Up,” or essentially curbside pickup spaces. Others tout pickup windows as a drive-thru feature for consumers to order ahead and collect food out the window.

In the back, Papa Johns designed modular stations for employees to use the same space for different products at different times. For instance, as they cut pizzas and place the pepperoncini pepper and Papa Johns' Garlic Sauce cup inside each box, they will be better equipped with a special space to add these final touches.

“Part of making it easier to say yes to Papa Johns development is having a smart and seamless design,” said Amanda Clark, Papa Johns’ chief development officer, in a statement. “We worked with customers and our operations team to understand how we can have our stores be a true reflection of our brand while delivering an efficient operational experience, and this design delivers on that.”

As far as timing goes, the new design, logo, and visual identity will unfold in a “phased approach,” Carpenter says. The new logo officially launches this week. The updated identity and store design will follow.

“Given the scope of the changes, we’re intentionally taking a methodical approach to this implementation,” she says. “The duration of the rollout is going to cover an extended period of time, and we’ve actually taken that into consideration in designing the elements of this brand evolution to make sure that we considered a period of transition or overlap.”

In other terms, some changes can occur quicker than others, and still present a refreshed vibe. Clark’s development team created a tiered approach to different levels of retrofitting existing stores.

It’s an important junction in terms of future expansion, however.

Lynch told QSR he believes Papa Johns could “build another 2,000 to 3,000 restaurants in the United States.”

Despite headwinds with labor and supply chain, Papa Johns has continued to open restaurants. The chain debuted 46 net stores in Q3, including 32 internationally and 14 in North America. Year-to-date, the brand added 169 net new units and expects to finish the year with 220–260 net new stores, which would represent year-over-year growth of 4.5–5 percent.

Papa Johns inked a deal with PJ Western Group to open 250 restaurants in Germany, and one with Drake Food Service International to open more than 220 units in Latin America, Spain, Portugal, and the U.K. Then in September (the record agreement), Sun Holdings agreed to debut 100 stores across Texas through 2029.

The brand finished the third quarter with 5,569 outlets systemwide, including 3,323 in North America and 2,246 internationally.

On that international note, Lynch highlighted in recent quarterly reports how the brand operates in 50 or so counties. Its competitors are in 100-plus. In one example, there are 200 Papa Johns in China—a country where Pizza Hut garnered 15 percent of its system sales last quarter—and Lynch believes there could be 1,000.

Papa Johns keyed franchisees in throughout the brand changes, Carpenter says. So Tuesday’s news is hardly a “grand reveal” to Papa Johns operators. From the outset, the goal was to build on the company’s recent momentum while also nodding to its heritage.

“This is an evolution, not a radical change, which I think [franchisees] are excited about,” Carpenter says. “… As a company, our mission and values are not changing. This is intended to put a finer point on it and help unite our focus across the organization.”

Added Max Wetzel, chief commercial officer: “We are evolving how the Papa Johns experience comes to life across all touchpoints, while remaining true to what got us where we are today and bringing to life our continued aspirations to improve and grow. This new experience is both a celebration of our tremendous momentum and a vision to inspire future growth.