Cracking the Menuboard Mystery for Restaurants

A new study shows why menuboards, in-store and at the drive thru, can be a major sales tool for operators.
Restaurant Operations | November 2019 | Danny Klein

More than half of customers are influenced by a restaurant's menuboard.

What are some restaurant buzzwords we can’t escape? Delivery. Mobile. Integration. Ghost kitchens. Maybe some combination of all those things, with plant-based meat tossed into the fold. Yet are restaurant marketers skipping something dine-in and drive-thru guests literally can’t ignore? Research shows 56 percent of customers are influenced by menuboards, and 74 percent said an easy-to-read setup is a top priority.

Operators talk to length about streamlining the ordering process. And one of the quickest routes to a positive ROI might just be where diners do the vast majority of their purchasing.

At 77-unit B.GOOD, led by former Dunkin’ vet Chris Fuqua, who took over as CEO last June, the brand said it improved sales and made service leaders more effective by simplifying the look and feel of menuboards. Fuqua added the change propelled B.GOOD’s line and speed of service.

The big flip, though, came with guest-facing metrics. Consumers simply had too many options before. Pick a burger. What bun, cheese, protein would you like? The back and forth started to frustrate customers and employees alike. Now, B.GOOD offers top-to-bottom curated offers that can still be customized, but simply make a better first impression. Additionally, it allows the chain to nudge new users where it wants them to go.

Taco Bell decided in September it was going to cut combos in half, like “decluttering a closet,” the company said. It removed some items and updated displays to feature best-sellers and refreshed choices. Taco Bell’s setup was nearly 20 combos long before. Today’s version spotlights iconic, branded items, like the Cheesy Gordita Crunch and Crunchwrap supreme.

In both cases, menuboard optimization provided a chance to simplify without focusing solely on what was being cut. In fact, Taco Bell said the change made room for future menu innovation. It didn’t limit it. Improving speed of service wasn’t a bad kicker, either.

B.GOOD echoed some of Taco Bell’s sentiments, noting how more straightforward menuboards provided innovation opportunities instead of constricting them, as abundant and slow-moving SKUs might.

Noodles & Company rolled out a broad refresh, too, this past year intended to bring attention to expansive changes, like Zoodles. Potbelly recently brought its center panel from 55 price points to 18 and introduced two new sections—make a meal and pick your pair. In Q3, menu optimization helped hike average check 5.8 percent, the company said.

Consultant company King-Casey and SeeLevel HX combined on a survey that takes a deep dive into the menuboard discussion.

The findings did not look into the use of digital menuboards, as only 30 percent of the brands in the study deployed them inside their four walls. None of them had digital displays at the drive thru.

At each venue, the mystery shopper made a statistical evaluation of both the drive thru and interior menuboards and then took photos of each. This took place in the spring of 2019.

Satisfaction, but room to grow

Two-thirds of the evaluators (66 percent) reported positive opinions of ordering from the menuboards, with 41 percent expressing top-box (liked it a lot) results. Drive thru and interior menuboards measured about the same. However, when asked what stood out, the shopper ratings varied significantly. 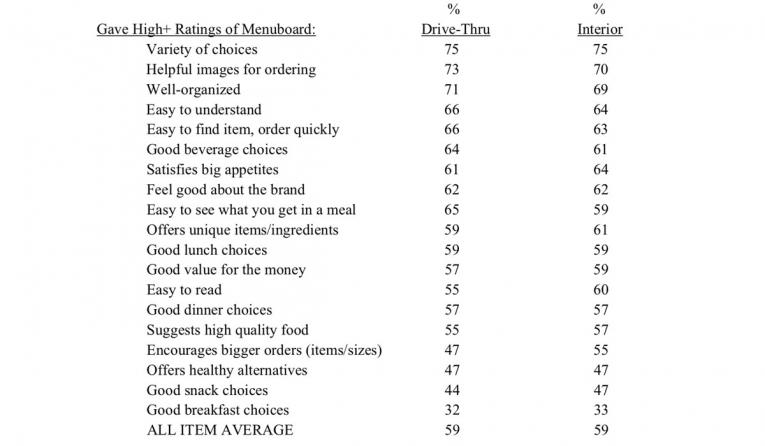 What does this mean? It’s really pretty straightforward: restaurant brands should invest in easier-to-read menuboards. Also, without changing menu items or pricing, brands would be well served to improve perceptions of food quality, which, in turn, could lift perceptions of value.

If you consider many quick-serves see upward of 70 percent of business at the drive thru, the data suggests a new point of emphasis. There’s room to grow at the very least.

Viewing the lower end of the scale, more interior menuboards (15 percent) did not have “enough information” compared to drive-thru menuboards (5 percent).

One thing about the “encouraging bigger orders” note: It’s worth thinking how order-ahead functionality could play a role in closing this drive-thru gap. Few things in this universe are worse than pulling up behind a car that orders 40 hamburgers. You sit for 10 minutes as they’re tacking pickles off seven off them, adding mustard to another 13, etc, and the nightmare continues. Many chains have fixes in place like, “pull your car up or to the side and we’ll bring the food when it’s ready.” But those are Band-Aid realities that don’t satisfy every customer, especially younger ones who don’t major in attention spans. And these practices definitely don’t work for every employee.

In a convenience-crazed landscape, offering customers the ability to order ahead and simply roll up and grab their food, is a powerful tool to wield for quick-serves. It not only accelerates the process for guests—it gives operators a heads up and allows workers to stay ahead before they get bottled up and buried in orders, all while the clock is ticking. While it’s unrealistic to think every consumer will use order-ahead functionality (that 40-burger ordeal will always exist) it can’t hurt to have the option available. Especially since your competitors will surely get it soon.

Some intriguing differences popped between the segments. 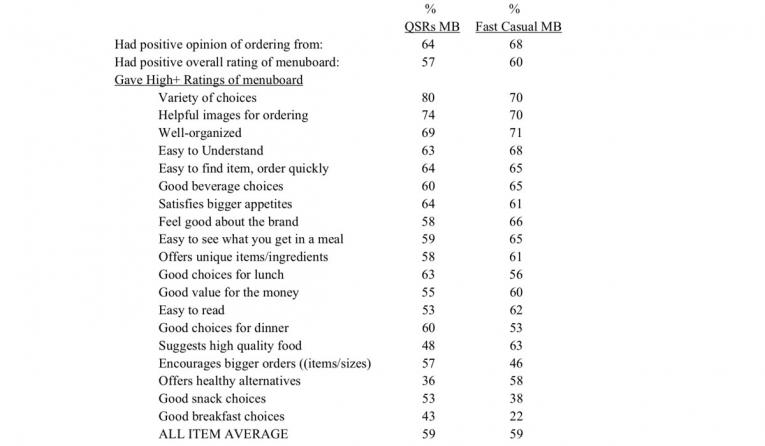 The findings: Quick-service menuboards were the clear winners in “showing variety of choices,” (80 versus 70 percent); “good choices for lunch” (63 versus 56 percent); and “for dinner” (60 versus 53 percent).

They also came ahead in “good choices for snacks” (53 versus 38 percent) and “for breakfast” (43 versus 22 percent). Those last two points aren’t surprisingly given fast casual’s tendency to skirt those occasions.

Overall, though, it appears quick-service brands, which, naturally, have a much deeper history with the drive thru, do a better a job communicating dayparts at the point of purchase. Fast casuals scored substantiality higher in “easy to understand” (68 versus 63 percent); making you “feel good about the brand’ (66 versus 58 percent); “easy to read” (62 versus 53 percent); “offering good value” (60 versus 55 percent); “high-quality food” (63 versus 48 percent); and “healthy alternatives” (58 versus 36 percent).

All of those are on part with the segment’s differentiators in general. Things like “easy to read” and “easy to understand,” though, might just be a result of fast casuals simply featuring newer assets. Less reworking and revamping and more starting from scratch.

Here’s a dive into how and why fast casuals are suddenly embracing the drive thru, something once seen as a line in the quality sand.

Here’s how the restaurants studied stacked up.

The question that pops here, of course, is why is Starbucks at the bottom? What’s always worth considering is where the core equities lie. Is the Starbucks drive thru the fastest experience in the world? Is the customer in front of you trying to add 12 different ingredients to their drink?

Starbucks thrives because its guests are particular and know they can have that direct person-to-person interaction and achieve an end result they’re comfortable with. Personalization, complete with your name on the cup.

The point being that a streamlined and simplified ordering process might not be up Starbucks’ alley, so to speak. Not on the level of a Taco Bell. What Starbucks does well—habitual dining and social experiences—is a very individualized experience. And that’s not so easy to replicate or direct customers through with predetermined choices. It’s why their rewards program has 17.6 million members in it.

All that said, Panda Express and Fazoli’s are clearly doing a great job with the ordering process and leading customers through that purchasing journey.

Let’s look at some other findings

Below is a graph on the number of menu items listed. Remember, this is from the spring. 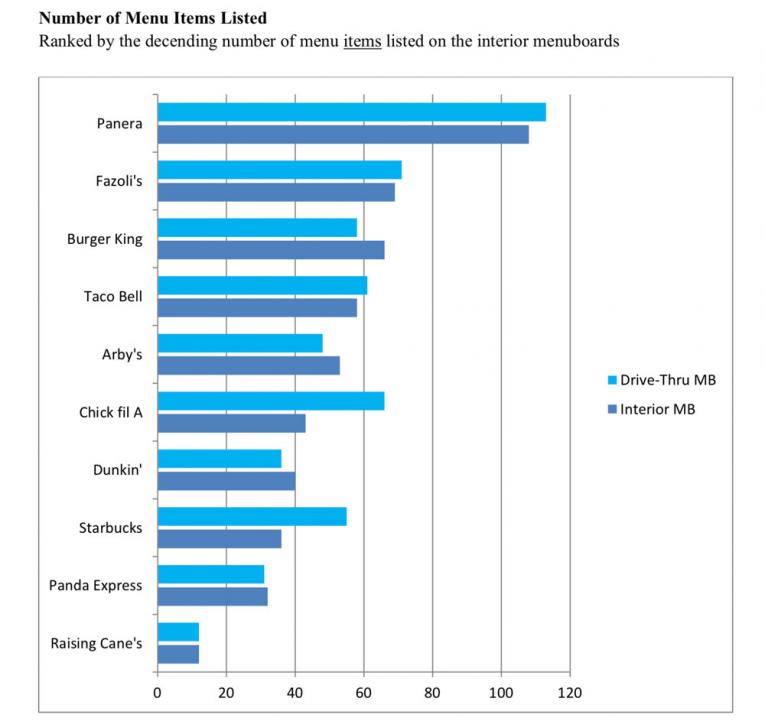 Panera’s 108 interior menuboard figure (113 at the drive thru) stands out. You could probably correlate this to why their scores in the previous chart lagged some other brands. But, at the same time, variety is kind of Panera’s MO. Could the chain benefit from some curation and displays that suggest items well suited for off-premises, like its new grain bowls?

At the other end of the spectrum, Raising Cane’s limited menu led to 12 on both sides, followed by Panda Express (32 and 31), Starbucks (36 and 55), and Dunkin’ (40 and 36). Dunkin’ has been working on reducing its SKUs for a while now. It cut back 10 percent of its options looking to improve consistency and speed of service last year. 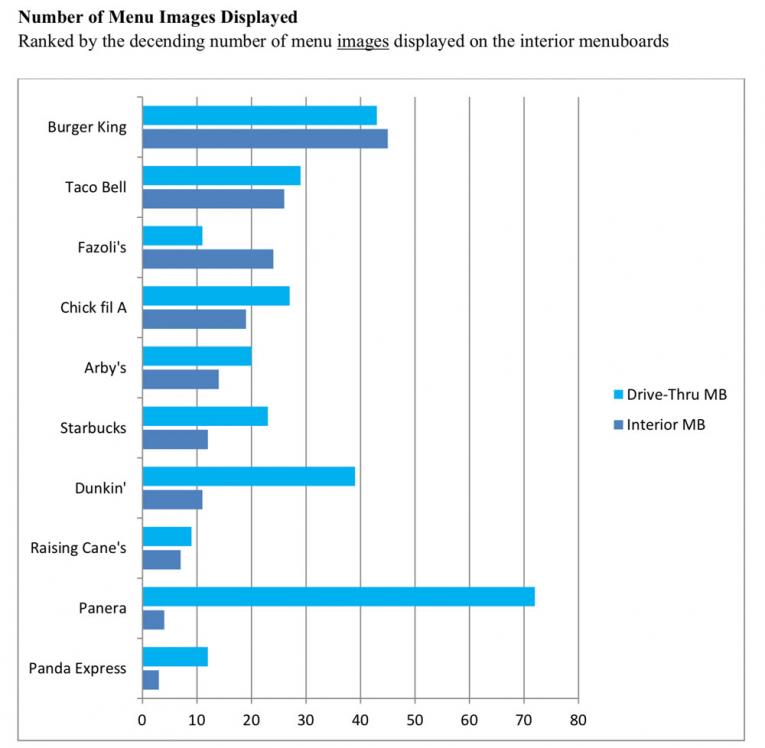 The above graph zeroes on menu images over menu items. Panda Express was lowest at three interior and 12 drive thru. Raising Cane’s (seven and nine), Arby’s (14 and 20), and Starbucks (12 and 23) were close behind. Panera displayed four images on the interior menuboard compared with 72 on the drive-thru version.

Some other visual assessment highlights:

King-Casey provided 10 menuboard best practices from its experiences in the industry, as well as the survey results. 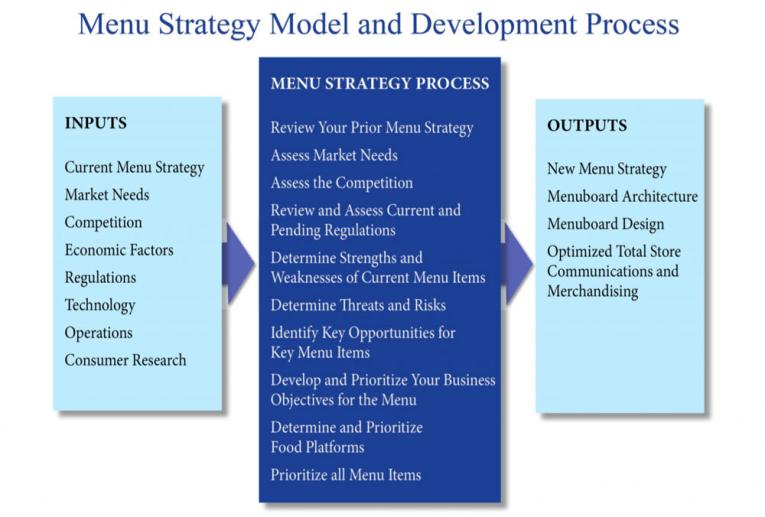