The U.S. continues to be a melting pot of age, race, and status—and so does your consumer.

There is no average quick-service customer.

Or so says Kim Holman, director of marketing for Wixon Inc., a flavor researcher and manufacturer. She believes the U.S. has become such a melting pot of age, race, and other demographics spread out across disparate regions that fast-food operators have no way of singling out any one typical, everyday customer.

But this doesn’t mean quick serves can afford to ignore the makeup of the country, their markets, and their brand, Holman says.

“I think the people, the manufacturers, and the [quick serves] who pick up on even minute changes are really going to be the winners,” she says. “When you look and understand how these people were brought up and you start to understand their taste profiles, you can really see how you can drive not only new product development, but repeat purchases.”

Indeed, with an intimate understanding of demographics—whether on a market level or within individual stores—quick serves can better direct their menu development, marketing, and many other operations. Just ask Karen Anderson, senior vice president of strategy and consumer insights at Arby’s.

“Obviously we want every person in America to eat at Arby’s more often, but part of designing your target and who you want to talk to is about making some choices, and you’re going to prioritize some people over others,” Anderson says. “All consumers are important, so we certainly don’t want to come up with something so polarizing that it would alienate certain groups, but that doesn’t really come up.”

Brett Larrabee, director of franchise sales and development for Famous Dave’s, a Minneapolis-based barbecue concept, says his company also has to prioritize whom it talks to from a marketing perspective because the 130-unit chain can’t afford broad-based marketing.

“We have to be very efficient with our marketing dollars, we have to be very focused on what our customers want and why they come back, and we have to be concerned about how we fit in to their choices and that demographic,” Larrabee says. “Because they have choices. It’s not just the other barbecue competitors. It’s everybody who serves food.”

To help you craft your own target demographic, we’ve run the numbers in three important categories—age, ethnicity, and income—and asked experts from across the industry how each affects the quick-service category.

Much has been said about the Millennial generation, the burgeoning group of 20–35-year-olds who have driven not only technology trends like social media and mobile devices, but also culinary trends. Roughly 22 percent of the population—approximately 68 million people—can call themselves Millennials, according to the U.S. Census Bureau.

“They balance their work and their friends with technology and social media; they’re all about multitasking; they’re smart, they’re young, they’re very bold,” Wixon’s Holman says. “They’re not really into fashion and that kind of cool stuff, but they’re really into comfort. … If you look at food, they were brought up on ethnic foods as part of their cuisines, unlike Gen X and unlike Baby Boomers.”

Kelly Weikel, senior consumer research manager for Technomic, says Millennials are an in-depth group that understands healthy eating and desires more unprocessed, natural foods. “Foodservice to them is just so ingrained in their lifestyle,” she says. “They’re relying on it; it’s a part of their life.”

Though the recession was particularly hard on Millennials, members of the generation commit the largest portion of their food expenditures to food away from home among all generations. Some 45.2 percent of 25–34-year-olds’ food expenditures is spent away from home, according to The Food Institute’s “Demographics of Consumer Food Spending: 2012” report. The share climbs to 46.1 percent for Americans under 25.

And Millennials’ spending potential is growing: Technomic data shows the generation will spend an estimated $400 billion in 2012, up 32 percent over 2009.

Anderson says that while Arby’s tends to skew older because of a higher price point, management is paying attention to the fact that Millennials are becoming a major chunk of potential business; after all, according to Census Bureau projections, Millennials will make up the majority of the U.S. population by 2030.

“What we’re very worried about in the long run is making sure we have healthy transaction growth, which means that you really need to focus some of your communications a little bit younger, to be bringing people into the brand at an early age and building the frequency from there,” she says. “The other positive about that is it’s a little bit aspirational. So as long as you don’t skew very young, you’re not alienating the older segments of your demographic at the same time.”

“We introduced items that we believed would skew more youthful to try to build up that business,” Kirvan says. “So last year, we put out a wrap. We saw what everyone else was doing with wraps and thought that might have some appeal. And that actually saw a response. 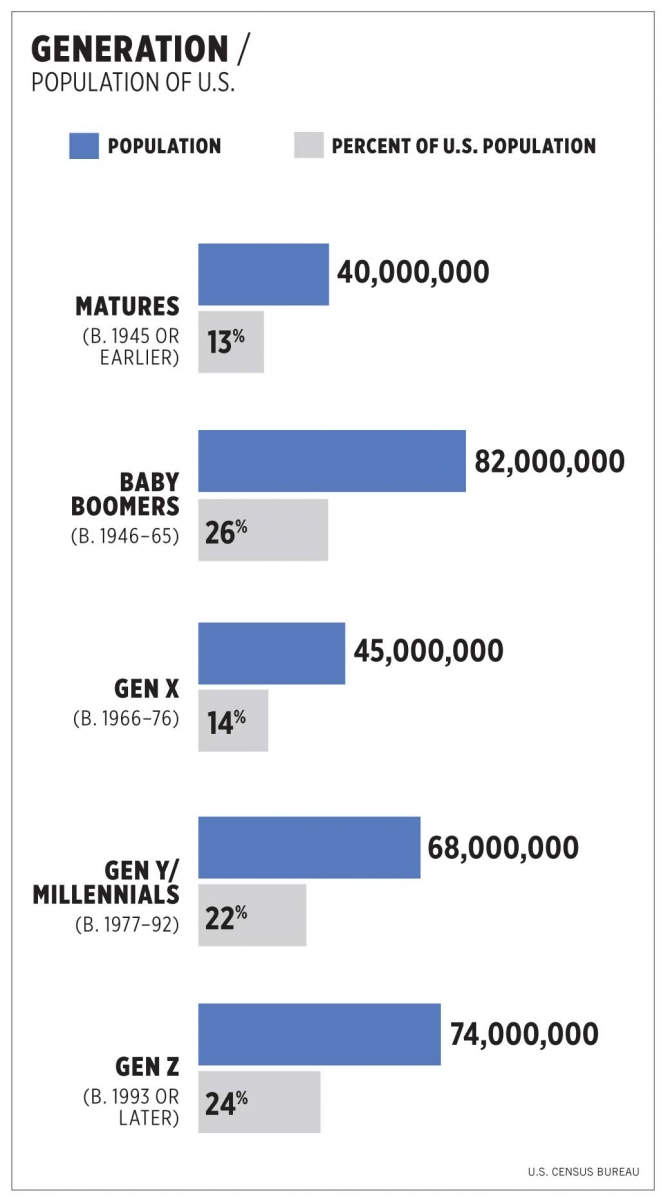 “[Younger consumers] are looking for more exotic flavors,” he adds. “Treacher’s is known for its fish and chips—it will always be that—but it was just a way to try to get different demos into the stores.”

But while Millennials dominate the headlines, experts say operators shouldn’t forget Generation X (born between 1966 and 1976) and Baby Boomers (1946–1965). Together, the two generations make up two-fifths of the U.S. population.

Holman calls Gen X-ers “ambitious” and “hard working,” adding that they take cues from the generation before them in enjoying comfort food. “What we’ve found is that they enjoy the classics, but they want them with a twist,” she says. “They want some nuances to them to show that they’re new.”

Baby Boomers, meanwhile, are the largest generation in the U.S., making up 26 percent of the nation’s population at 82 million members strong. Holman says quick-serve operators should keep in mind that Boomers enjoy the classic dishes they were raised on.

“They’re all about those three meals a day, they’re about the basics, they’re about the meat and potatoes and vegetables,” she says. “Because they’re aging, they really want to eat healthy, so low sodium is important to them, reduced sugar is important to them, all of that. They’re really going to be the ones to change the ways we age in America and the ways we eat as we age.”

Brian Todd, president of The Food Institute, says Boomers, who spend around 39 percent of their food expenditures on food away from home, will likely start to spend less outside of the home.

“Baby Boomers [will] continue to move into their senior, retirement ages, so [it’s] a large group moving out of that spending-more-on-away-from-home eating and into a more budget-conscious [mindset], probably less spending on that front,” he says. “It will be a small percentage of the overall population, but the way the trends are going, it will still be increasing more than it has been in the past, as people live to be older.”

While ethnicity differs greatly from market to market, the experts say operators should take note of the overall trends and habits of different racial groups as the nation becomes more diverse.

The Food Institute reports that Hispanics spend 38.1 percent of their food expenditures—an average $2,474 per year—on food away from home.

“The difference will be that overall, as the Latino and Hispanic population increases as a percent of the U.S., how will that impact away-from-home eating?” Todd says. “The potential is there, knowing 38 percent of their income goes to away-from-home expenditures (41 percent is the average). There’s a potential to increase that share over time. If you have a bigger base and you can get a bigger share, then it should be a positive.” 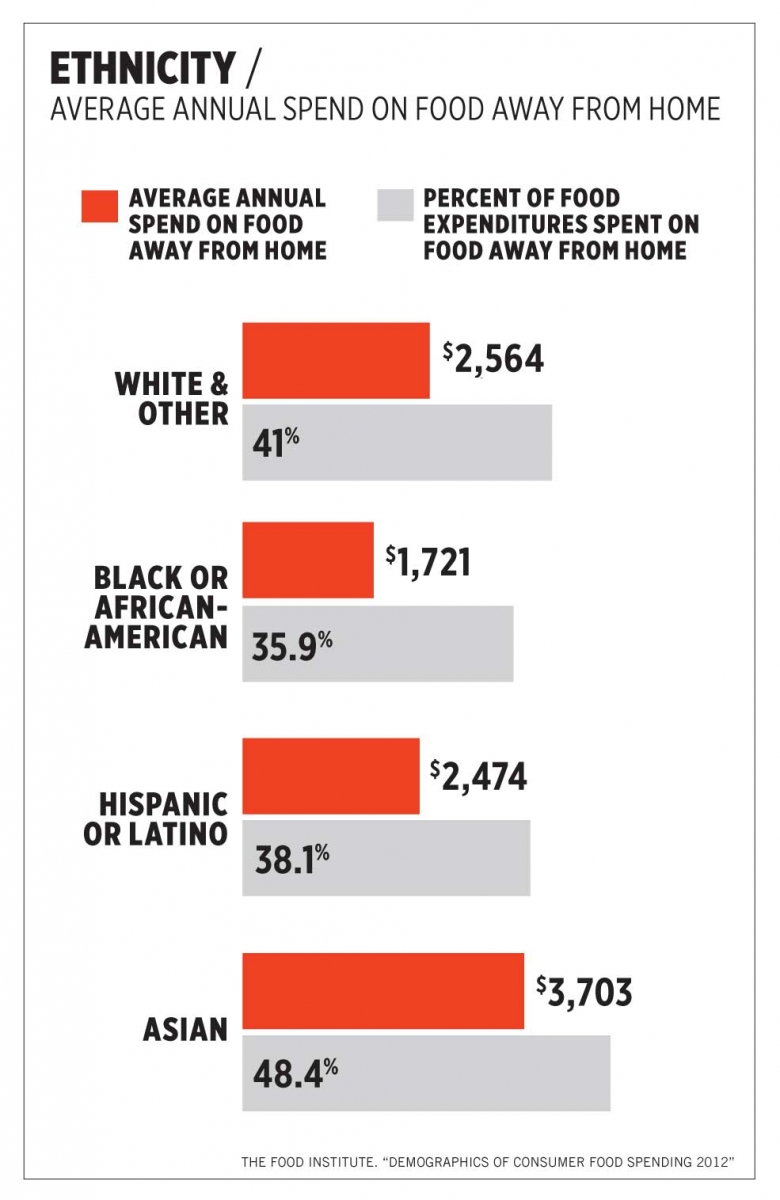 Holman is more blunt in stating how important it is to cater to the Hispanic demographic. “If you do not have a Hispanic initiative,” she says, “you really need to get one. The growth that is being projected for the Hispanic population in the United States is phenomenal.”

But it’s equally important to get in front of other ethnic groups. African-Americans make up 12.3 percent of the U.S. population and will make up 16 percent of the population by 2050. Members of the demographic spend 35.9 percent of their annual food expenditures, or an average of $1,721 per year, on food away from home, according to The Food Institute.

Perhaps the easiest move for operators looking to reach different ethnic groups is simply opening stores closer to where these demographics live. For example, Famous Dave’s, which is primarily a suburban, large-footprint casual concept, rolled out a smaller, quick-serve prototype to fit into more urban demographics where younger and more diverse groups tend to locate. 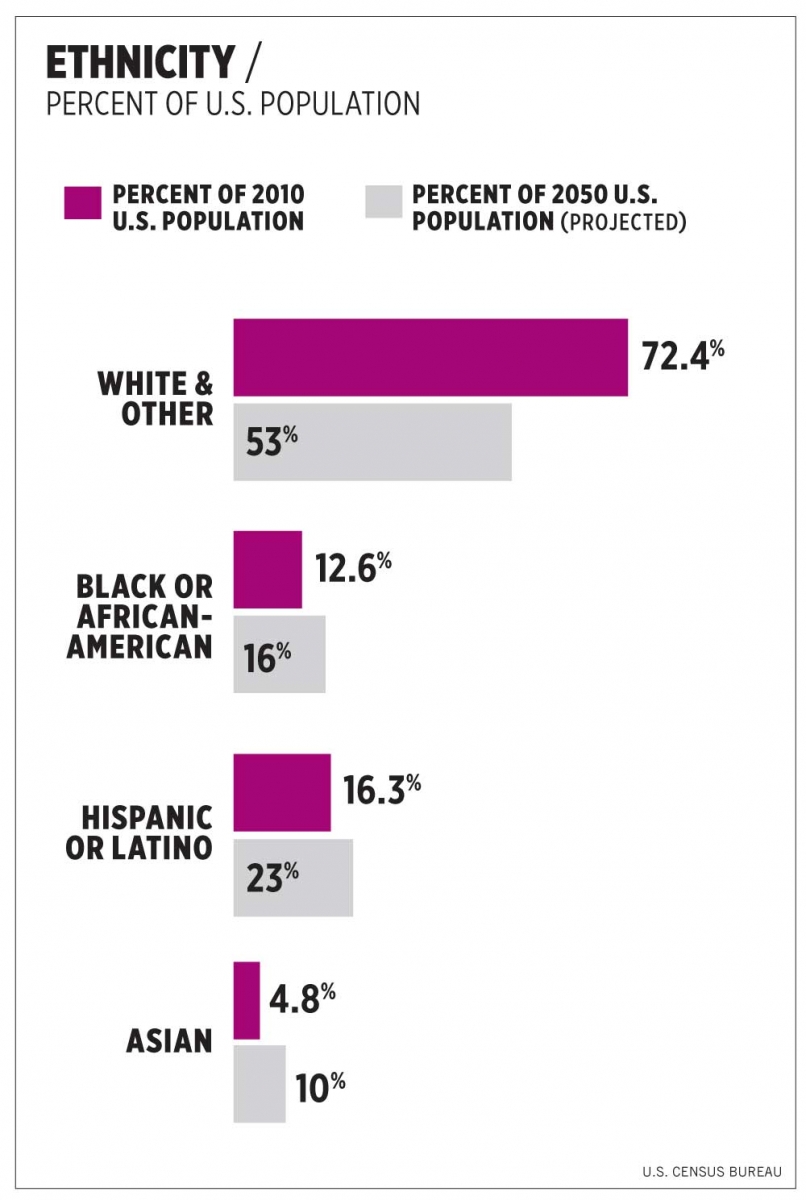 “[The quick-serve prototype] allows us to more deeply penetrate markets with a number of smaller units and kind of pursue urban stores that have much more expensive rent and build-out costs,” Larrabee says. “The smaller unit gives us more flexibility from a real estate perspective.”

Weikel says ethnicities like African-Americans, Asians, and Hispanics or Latinos want “to be catered to a little bit” and appreciate efforts companies make to reach out specifically to them.

“With Hispanics, a lot of it’s been on language, with different cultural heritage, authenticity of the food,” she says. “And I think as the Asian group becomes larger, then we might be seeing that, as well. … I think also, just in terms of the menu items offered, our research shows that these groups have a greater demand for ethnic foods. So obviously, although that’s something that’s been on-trend for a while, I think it’s going to be even more in demand as these groups increase.”

Technomic’s data backs up Weikel’s claims. Some 90 percent of Asians, 88 percent of Hispanics and Latinos, and 72 percent of African-Americans, according to its data, order ethnic food at least once a month. Seventy-five percent of white customers do the same.

Holman echoes the sentiment that ethnic foods are a great way to reach more diverse populations, adding that the Hispanic and Latino population will be an increasingly easier target to cater to as young immigrants and children of immigrants get older and more familiar with U.S. foodservice.

The U.S. may have first become a melting pot with a promise of opportunity to all, but the Great Recession that sent the economy into the pits in 2008 has dispelled any kind of notion that wealth is a heartbeat away in the U.S. The recession made a lasting impact on the demographics of quick service and how various groups choose to spend their disposable income.

“I think the recession did impact different demographics differently, and I think it’s no surprise that the impact is highly correlated with the unemployment rate, which tended to hit a younger demographic much harder,” Arby’s Anderson says. “So if you think about disposable income changes over these last couple of years, it’s definitely had a disproportionate percentage-wise impact on the younger age bracket versus older.”

But younger customers aren’t the only ones with lighter wallets. Poverty has continued to go up, and some 15 percent of the population now lives below the poverty line, according to the Census Bureau. Meanwhile, the Federal Reserve reported this year that median family net worth dropped 40 percent between 2007 and 2010.

And though the quick-serve industry, with its value menus and overall lower price points, would seem a natural hot spot for lower-income customers, data proves that operators have an opportunity to reach customers of all income levels.

“One of the interesting things was affluent consumers definitely use foodservice more often, but it’s not just the more pricy restaurants,” Weikel says. “Even at fast food, their rates were just about equal or just as high. So that’s one thing to keep in mind, that quick service is not just lower-income consumers.”