When the pandemic hit, nearly every single person Will Reynolds knew left New York City. Staying home for such an excessive period of time was enough to drive anyone stir crazy. So Reynolds would take walks to clear his head.

There, Reynolds, who always loved the buzz of the Big Apple, came face-to-face with the devastation created by COVID-19. With shops boarded up and vacancy signs everywhere, it was like a ghost town.

“It was very difficult to see it in that state,” Reynolds says. “It just kind of inspired me to do something about it. I wanted to bring some life back to Manhattan, and I wanted to do that through food and with humor.”

Reynolds is from South Texas and even though he spent most of his time in New York City selling software for tech companies and had zero restaurant experience, he took a chance and launched a new food concept in the middle of a pandemic.

Although many restaurants might not have had the courage or grit to begin operations during such uncertain times, Big Stick Willy’s found its path in employing those who lost jobs during the coronavirus.

“What I didn't realize at this time is every single person in the foodservice industry was out of work,” Reynolds says. “So I was inundated by very good chefs, really good people that were willing to help out with an interesting project.”

About a year later, Big Stick Willy’s passed the trials that come with opening a new business and is now eyeing the virtual kitchen space for larger brands. The process to get here involved initially getting some chefs together and five or six taste-testing rounds. With tremendous feedback from coworkers and restaurateurs across Manhattan, Reynolds was impassioned to get his mozzarella sticks to market any way he could.

Big Stick Willy’s, which now includes two virtual kitchens in New York, leveraged other restaurants and began selling mozzarella sticks via Grubhub, DoorDash, and Uber Eats. Customers quickly flocked to the virtual concept, and local restaurants, grocery stores, and even Yankees Stadium followed suit, reaching out in hopes of offering Big Stick Willy’s to guests. Big Stick Willy’s may be situated at a tipping point for the brand, as it engages in early conversations with chains like IHOP, TGI Fridays, and Applebee’s on its potential virtual brand status. With commercial kitchen space for manufacturing in Houston, Texas, Big Stick Willy’s is evaluating just how many mozzarella sticks it can produce. 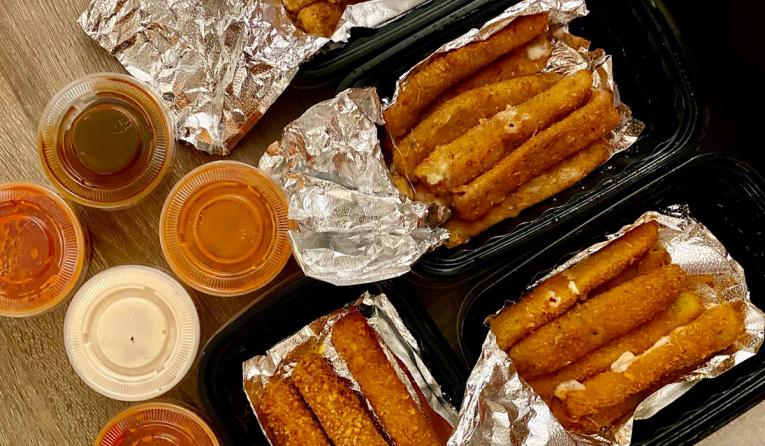 Beyond its unique look at mozzarella sticks, supporting the community is one way Big Stick Willy’s aims to set itself apart, especially because the brand was founded under the idea of bringing life back to Manhattan.

“Every single person from literally day one until now was someone that was firsthand affected by COVID, whether they lost their job or they were sick from it,” Reynolds says. “I really like to bring the community into it.”

For Reynolds, the journey to Big Stick Willy’s present day was life-changing. Big Stick Willy’s now ships nationwide on its website and envisions a future similar to ice cream giant Ben & Jerry’s: countless brick-and-mortar stores with a unique experience alongside a wide presence in the frozen food section at grocery stores.

Big Stick Willy’s is part of a larger ghost or virtual kitchen trend, one that Reynolds says is just at the tip of the iceberg.

“The whole market has just kind of evolved,” Reynolds says. “It was already heading that way very slowly, but the pandemic just kind of sped up everything because everyone was inside all day stuck on their phones and all their electronics, and that was essentially the only way you could get food.”