A&W has growth on the mind again after a year of resetting.

A&W isn’t in a rush. Given the brand hit the restaurant landscape a year after World War 1 ended, you might credit decades of wisdom for the patience. But that wouldn’t be quite right.

The classic restaurant chain paused development after 2017, chief executive officer Kevin Bazner says. The move, though, was eight years in the making, not 100.

“We can take our time,” Bazner says, “And frankly we have to. That’s how our system works since every initiative touches a restaurant.”

In 2011, a core group of franchisees purchased A&W, nine years after YUM! Brands bought the company along with Long John Silver’s. They asked Bazner, who worked with A&W from 1985–2002, to return and lead the chain’s comeback. What made this arrangement unique, however, was A&W’s franchisee-first approach to reinvigoration.

“It takes a little bit longer because we don’t—I can assure you—we don’t agree on everything,” Bazner says, with a laugh. “But we feel very strongly from a leadership perspective that this is how you lead.”

Aligning initiatives across the board takes time and constant dialogue, Bazner says. Every change A&W’s wants to make needs to be approved by the same people who live and run the brand on a daily basis. Bazner says industry friends from outside A&W approach him often and ask if this franchisee-directed structure works. “And I just hold up our report card,” he says.

At its peak in the late 1960s, A&W had 2,400 locations. It was woven into the fabric of American dining when road trips ruled, not iPads. Food stands and summer landmarks were common hangouts. And A&W could plant its flag along any route in the country and draw crowds like gawkers to a Beatles concert.

There were several disconnects during the YUM! era. Perhaps the most pronounced was a co-branding initiative that drained the chain’s core equities. According to A&W’s most recent franchise disclosure document, the company had 240 single-brand franchised outlets at the end of 2018—down six from the previous year, which speaks to the pause Bazner referred to (four additional units are company run). A&W grew that side of its business by a net of 11 locations from 2016–2017.

It’s a deliberate move, Bazner says, to improve the health of A&W’s overall system and set it up for the purposeful growth. Of those base stores, the units not co-branded, roughly 65 percent have been reimaged, with 90 percent expected by year’s end. The KFC-A&W stores are about 80 percent upgraded. The Long John Silver’s-A&W units, though, are just 20 percent (A&W Brands bought the seafood chain out of bankruptcy in 1999 before the company that would become YUM! took it over. YUM! sold it nine years later).

Creating a healthier fleet involves thinning the co-branded footprint, Bazner says, especially on the Long John Silver’s side, where those stores are as likely to run their lifecycle as be remodeled.

Bazner says A&W will end, likely, with 200–250 solid performers on the co-branded side. “Less than half of where we started,” he says. “But a stronger half with people who are committed to the brand.” Of those, he expects about 150 to be of the KFC variety.

Why is A&W taking this route? Firstly, the company found value—both sales and affinity wise—in having restaurants fly the A&W banner.

As of December 31, there were 49 freestanding locations with drive thrus. Those averaged net sales of $950,777 with the top quartile at $1.36 million. The highest performer pushed $1.82 million.

Convenience and gas station units with drive thrus, of which there were 59 reporting in the base, averaged $566,119. Twenty-four captive restaurants with a full menu measured $659,527. 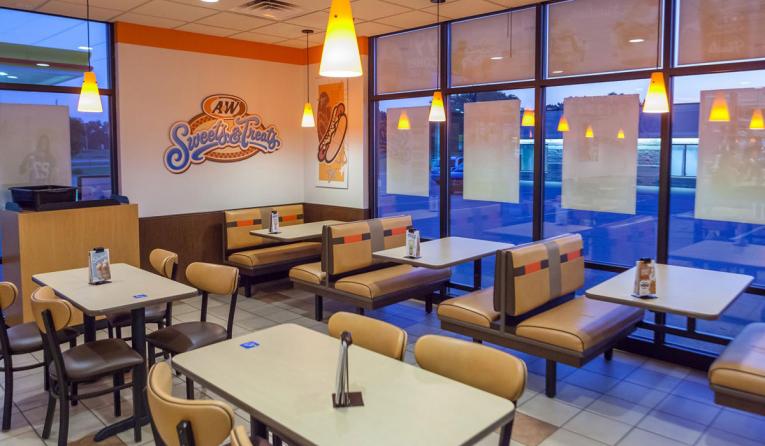 A&W is remodeling its restaurants, with a focus on the single-brand outlets.

In the past five years, stand-alone A&Ws have seen same-store sales stack up 28 percent, or 33.4 percent since the ownership switch.

A&W doesn’t provide exact figures on its co-branded locations, but Bazner says the company is “not focused” on expanding the side of its business. “We never have been,” he says. “That business is starting to run through its lifecycle.”

So you can draw a pretty clear conclusion. One part of A&W’s business is growing; the other is not. And it’s mostly with the Long John Silver’s combo, Bazner says, which is why A&W isn’t invested in reimaging those assets.

He says the KFC version has legs and has improved, although it needed to be trimmed as well. “When AUVs are growing, operators are more inclined to reinvest in their business,” he says. “When you’re in a box that the sales are declining and have been declining for a number of years, you’re less apt to make those investments.”

“That business is declining for us while the other two are stable and growing,” Bazner adds of the Long John Silver’s stores.

Speaking of expansion, A&W is ready to get back on the front foot, Bazner says. The brand has 17 restaurants about to open or in various stages of development, the company announced. Two new franchisees recently inked deals to bring locations to Nevada, including Las Vegas and Tonopah. The latter will be A&W’s first hotel and casino store. For an offbeat side note, it’s being built in the supposedly haunted Mizpah Hotel.

Five restaurants are scheduled to open in May and June, including three gas and convenience locations. In addition, sites have been selected for 10 future stores and A&W launched its flagship Asian restaurant April 17 in Singapore’s new Jewel Changi Airport. It’s the latest of at least 40 international and domestic restaurants planned for 2019. A second Singapore venue is on deck for the spring as well.

A&W has opened more than 60 U.S. restaurants since the 2011 acquisition.

Bazner continually refers back to that change as an inflection point in A&W’s trajectory. “One of our competitive advantages is the ownership,” he says. “Our shareholders are our franchise partners. It’s a long-term view of the business. No exit strategy.” 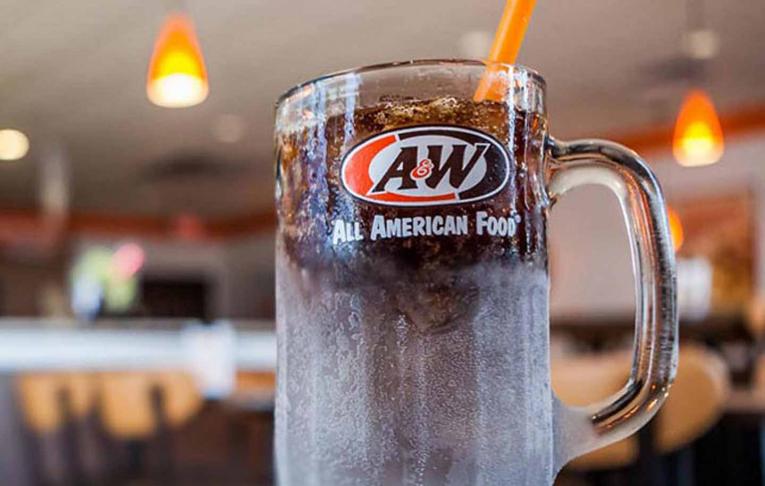 A&W is back to making all of its root beer in-house.

This past year, A&W hit the brakes so it could tighten its real estate. The company reorganized internally and raised the bar for operators, Bazner says.

That’s why the company grew, domestically, at half the rate compared to recent years (down to seven restaurants from 15). Last year, A&W brought in its first franchise sales development professional. “We felt that we had outgrown ourselves a bit,” he says. “We needed to strengthen our operators support for not only existing restaurants but for new restaurant openings as well.”

As the new ownership opened restaurants, A&W absorbed information. “We developed enough new restaurants and we have enough data over seven years to now know what really works, what works for the operator, and what also works for us in the market.”

That’s an interesting conversation for A&W. The sweet spot, as the sales show, are freestanding buildings with a drive thru, plus or minus 50 seats, on an acre of land, Bazner says. Yet you need to be careful about the spot. Smaller, rural communities can offer land for less than $100,000 an acre. There are some urban, suburban spots where it runs north of $800,000.

Beyond the costs, however, A&W discovered that it simply works better in smaller DMAs. “Those are our roots,” Bazner says.

“We can get in those locations and do north of $1 million,” he adds. “That’s a very nice economic model.” 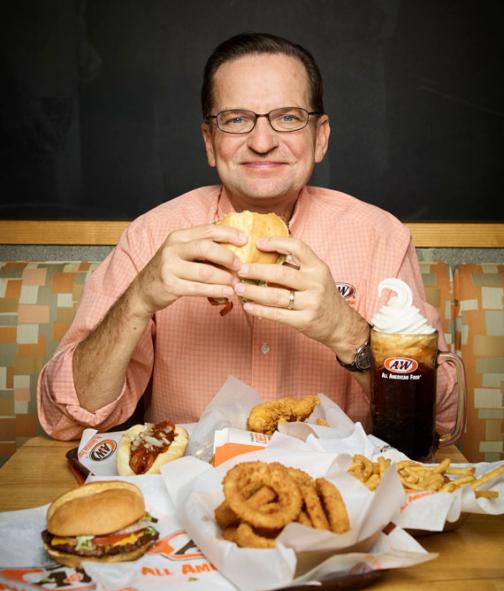 It isn’t all that different from what fueled A&W’s rise. When the chain is a destination, guests can pull on the nostalgic vibes like they’re drawing root beer from the draft.

“That whole strategy harkens back to those fond memories that everyone has of the brand in the drive-in days,” he says.

For A&W, it comes down to the cues, and that’s something that was getting blurry before new ownership jumped in. Something as simple as making the root beer in-house. A&W returned the core practice to stores sytemwide and is in the process of rolling out a draft arm, “just like it used to be,” Bazner says.

In addition to reigniting past feelings, these changes also project quality, Bazner says. It’s where A&W plays in quick service, since it’s not designed to battle aggressively on price. “That has been our value proposition from day one, and we can’t compete in the dollar menu arena,” Bazner says. “We don’t have the share or voice to drive traffic there. We do that locally, but broadly it’s the quality initiative. We stand on our product.” Returning to the franchisee-focused leadership model, there are restaurants in A&W’s system run by third-generation operators. There’s a heavy single-brand focus in the system where franchisees are in their stores day-to-day, talking to customers.

“They have pride in being able to present and communicate to their customer they’re making [the root beer] fresh in store,” Bazner says. This is why changes of the long-term and cost-intensive variety fit A&W’s dynamic. The brand makes decisions from the trenches, not the luxury box.

“From a consumer perspective, it resonates,” Bazner says. “Our root beer category as a percentage of sales mix is growing. Not dramatically, but growing somewhat on a per store basis. In an environment where carbonated soft drink business is declining that’s something we’re proud of.”

“That operator just really believing in quality of like it used to be is a piece of it for us,” he adds.

The leadership, both on the company and franchise association side, is all the same people who started this journey in 2011.

“We say, OK, we’ve got the gift of time. Let’s make sure we can provide great support to our operators in their first year of operation,” Bazner says. “Once you get past that the rate of success goes up quite significantly.”