Wings Over is growing with its 2.0 model, which puts an emphasis on the food and customer experience.

It was last October when Dan Leyva and newly formed Delectable Capital took the reins at Wings Over, a 40-unit chicken wing franchise with locations across 13 states. Leyva quickly recognized the top dilemma at hand: How do you reimagine a concept while keeping the integrity and identity in place?

Wings Over was founded in 1999 in Amherst, Massachusetts, and began franchising in the early 2000s. Yet despite a cult-like following in communities it operates—Leyva was even one of those enamored customers himself at Cornell University—Wings Over was staying put as the industry evolved. Leyva knew that had to change.

On August 2, Wings Over launched a major rebrand that touches everything from the ordering experience to the logo, design, website, and more. There are four “2.0” locations coming in 2018: Athens, Georgia; Clemson, South Carolina; College Park Maryland; South Bend, Indiana; and Knoxville, Tennessee. Leyva says existing stores will retrofit the design over time.

Throughout the process, Leyva says every choice was measured against three pillars the team installed when it purchased the brand. If the swap, as simple as a material choice, didn’t meet the criteria, the team tossed it. And they’re not complicated points, just geared toward keeping Wings Over’s two decades of integrity in tact:

Wings Over worked with Chipman Design Architecture—a group known for its Chick-fil-A work—on the platform. The goal wasn’t to make the restaurants modern, it was to make them clean and fresh. And Wings Over wanted to take a reverse course to many of its chicken-wing competitors: the brand hoped to encourage dine-in guests with the changes.

“Chicken wings aren’t inherently something that people think of as a clean food,” Leyva says, referring to the messy eating style. “So we wanted the presence and everything else around the chicken wings to feel clean.”

Wings Over added Coke Freestyle machines, digital menu boards, and communal and private-seating options. There are TVs to watch sports—a big draw in the college spots.

“It’s just a full experience in terms of getting great service from our front of the house, while still getting that fresh, amazing food,” Leyva says. “That’s actually one of the biggest things we wanted to make sure we reinforced with this. Our food has always been fresh, made from scratch, by hand. How do we continue to showcase that and how do we continue to make that? One way is the fact that getting it fresh in the restaurant is always better than getting it delivered.” 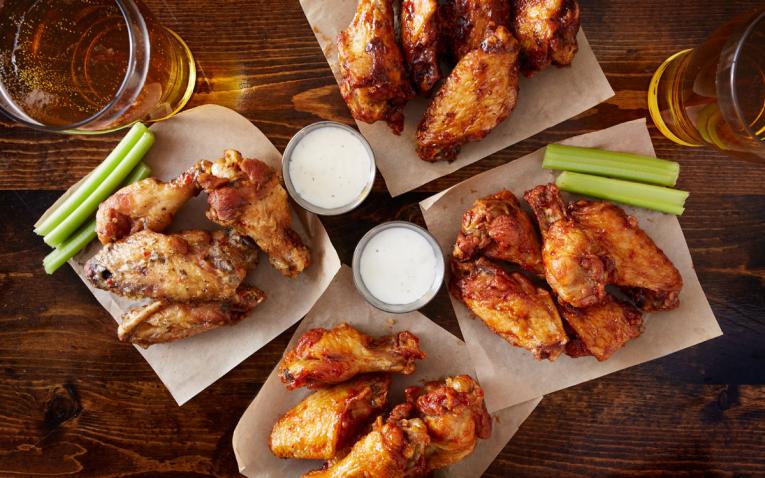 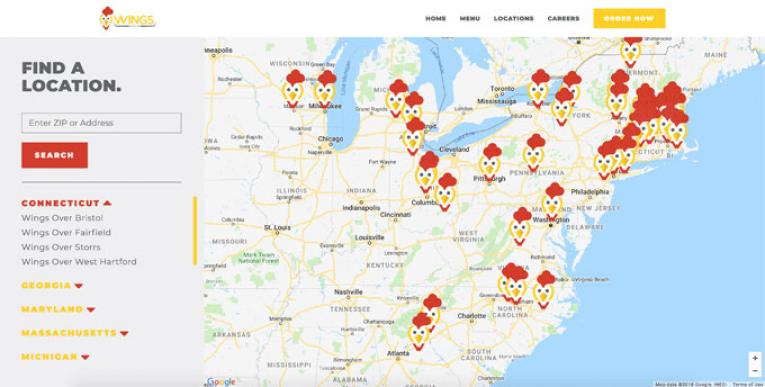 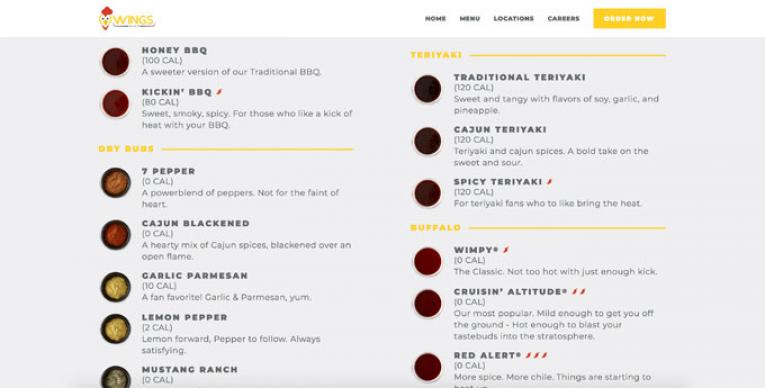 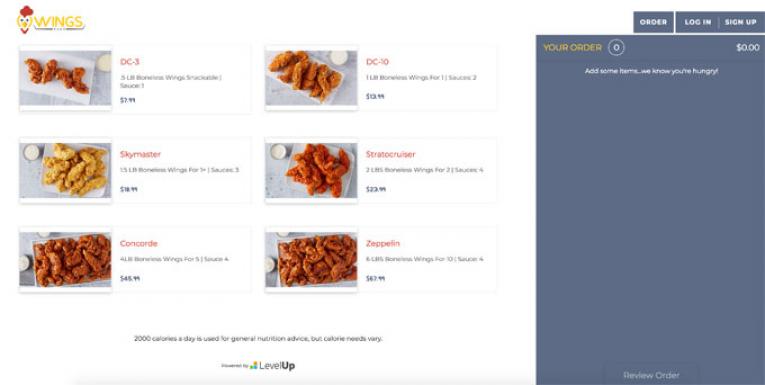 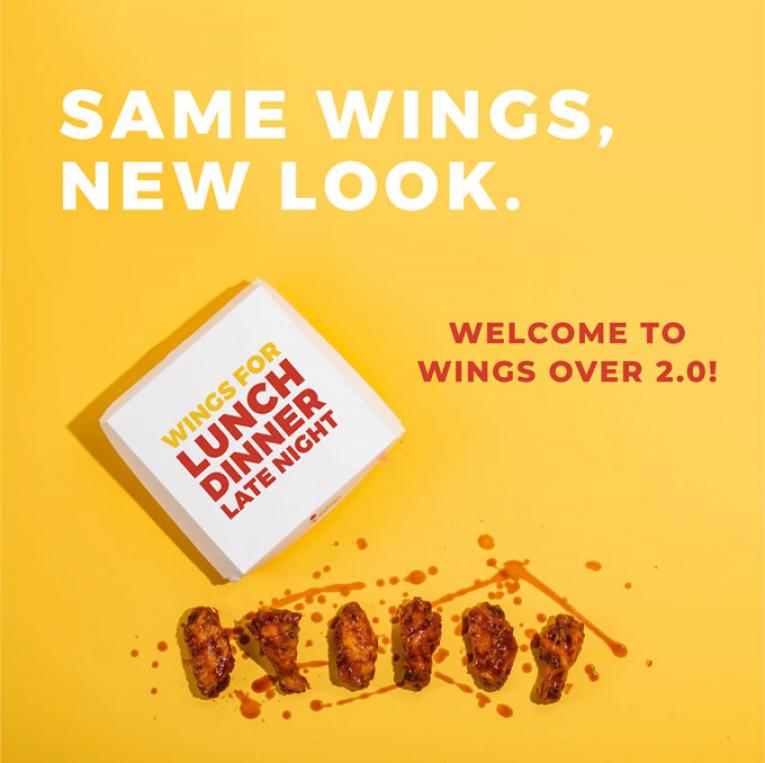 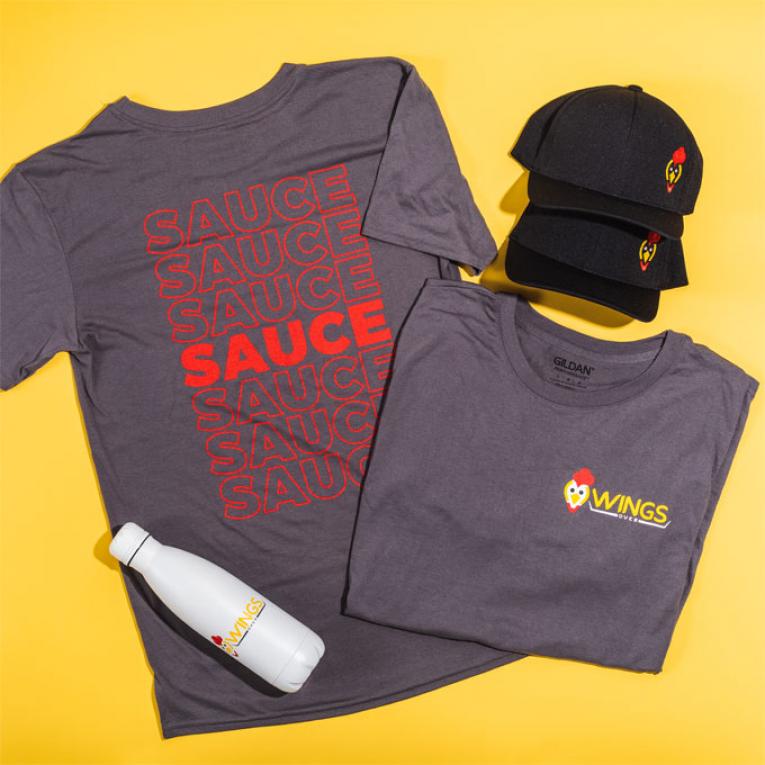 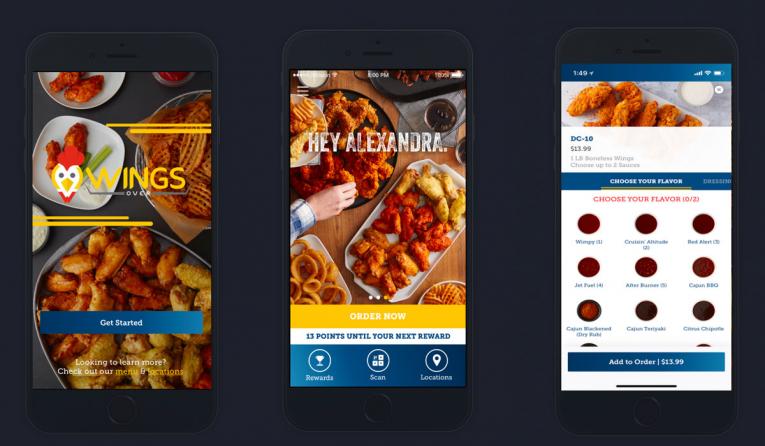 That’s not to say Wings Over is taking anything away from delivery, which remains a major component of its business. In fact, the brand addressed that opportunity as well. Wings Over teamed with Olo and LevelUp to launch a new mobile app that significantly improves the ordering experience. Leyva says he looked at some of the best apps in the quick-service space, everything from Domino’s to Sweetgreen to Cava, and examined how customers could view ingredients, customize orders, and so on.

What Wings Over created offers an ordering flow that’s not just your traditional pick an order of wing, drop down for sauce format. Now customers can see images of every sauce. They can learn about each sauce. Diners can view sides. They can pay from their phones. “Everything is an interactive experience. That was a huge, huge part of this rebrand,” Leyva says.

Back to the design itself, Wings Over strove for a polished setting with neutral colors and pops of color. This also allows each concept to tailor its design to the local community and present a brand far removed from the sterility some customers associate with chains. For example, the chairs have pops of color that represent the area, say the colors of the local professional or college team.

“We want our colors to represent that identity of that community. Because the beautiful thing about Wings Over is that it’s not just Wings Over. Every location is localized. So it’s Wings Over Athens. Wings Over Clemson. Wings Over College Park,” Leyva says.

The locations are designed to cater to different types of guests. The tables are arranged so a single person coming in for a business lunch would feel comfortable. Or a group of eight college students who want to watch a game. They don’t serve alcohol, either, making it a family friendly option. It’s also curated to meet the demand of off-premises with a pick-up counter.

The menu boards were a key change, Leyva adds, since a wing concept is often an agile one when it comes to adding new menu options. In the past, introducing a new product and showcasing it was a logistical problem. The digital menu boards allow guests to see the food and sauce now. “You’re able to really interact with our food a lot more than just a description on a magnetic or foam menu board,” he says.

Another goal of the rebrand was to broaden the appeal of the concept. College towns have always been a natural marketplace for Wings Over, but Leyva says the brand isn’t laser focused on one specific DMA or demographic. The improved dine-in features and digital capabilities are features he hopes will work for new and returning guests, whether it’s banks placing an order for events or car dealerships swinging by.

Wings Over already has a lot of pick-up business, so Leyva saw this dine-in category as whitespace worth pursing.

“Delivery is definitely on the rise,” he says, “and we’re very mindful of our footprint. We’re still not a full-service concept. We’re still not going into massive, 3,000, 4,000-square-foot locations. We’re still keeping a very tight footprint, but we’re just making sure, even if it’s just 20 seats, we want those 20 seats to be really comfortable. We want to make it so you really want to come in and eat, because, in general, I think a lot of people realize, hey this food is always fresh and I can eat it immediately. That’s an amazing experience.”

As for future growth, Leyva says they came in and spoke first and foremost to the current franchise base to take a pulse of the organization. They’ve rolled out some new menu options, like a lemon pepper flavor that’s been a hit, and are looking at new beverages, and more. All of the current expansion is corporate. “We want to make sure that we can get the new model right,” Leyva says. “We want to make mistakes and learn from all this. Hopefully we’re not making too many mistakes, but we want to make sure that we’re tightening this up so that when, after we do this review and our partners want to decide they want to grow, we’re able to give them a really polished concept that they can put fuel on the fire and grow from there.”