The legacy chain is seeing double-digit sales increases this year.

Neal and Nimesh Dahya have worked with nearly 200 franchised locations under nationwide brands like Burger King, IHOP, and Pizza Hut.

But the brothers may not have faced a greater challenge than when they acquired ice cream and burger chain Fosters Freeze five years ago.

“We were always the franchisees, so when the opportunity to purchase Fosters Freeze arose, we were very excited because not only would this acquisition give us a business presence in our home state of California, but we would be able to be the franchisor of a brand, which meant that we could use everything we learned as a franchisee to improve the brand from the top,” says Neal, who serves as CEO.

When the Dahya’s were handed the keys to the 66-unit chain, the brand appeared neglected because of little to no corporate support from the previous owner. Franchisees were essentially left in the dark.

Neal and Nimesh immediately recognized the disconnect. The first step as new owners was to bridge the gap by building a foundation of support for franchisees. That meant if operators had any questions, they had the means to contact the Dahyas directly for solutions.

Amid this process, Fosters Freeze—a legacy chain founded in 1946—went through a brand relaunch that enhanced the store design, logo colors, packaging, and uniforms without marring the nostalgia. Additionally, the Dahya brothers streamlined the supply chain, revitalized the website, developed digital menu boards, built an intranet for franchisees, and established partnerships with Grubhub and DoorDash. Operations, training, data, were also brought up to speed.

“We saw unlimited potential for Fosters Freeze because it was an iconic California brand that just needed to be updated with the times,” Neal says.

Sales across the system have increased each year since Neal and Nimesh gained ownership. That includes a double-digit jump in 2020 despite the COVID pandemic, mostly due to Fosters Freeze’s walkup and drive-thru model. Because off-premises was already built-in, the brand has remained fully operational throughout the crisis, and Nimesh believes Fosters Freeze is uniquely positioned to thrive in the coming months.

There’s reasons for Nimesh’s optimism, and that’s not just because Fosters Freeze preaches “California Positivity.” He can simply point to the numbers. According to The NPD group, off-premises orders from carryout, delivery, and drive-thru increased by 22 percent year-over-year in Q3. Drive-thru grew by 27 percent, and accounted for 44 percent of orders outside the four walls.

Some franchisees, who have been in the system for multiple decades, have seen record-breaking sales. Indoor dining is shut down in 41 of California’s 58 counties, which accounts for 94 percent of the state's population. In Los Angeles, outdoor dining is disallowed as well. Those restrictions appear to have minimal effect on the 74-year-old restaurant chain.

“COVID-19 was disastrous as a whole, especially to the restaurant industry in general. Although PPP [Paycheck Protection Program] did give many restaurants a chance to survive, it's unfortunate that a lot of them will not survive, and many of them have already permanently closed. It ultimately only gave them a temporary lifeline,” Nimesh says. “… I just think how our model was built from back in the days, we were positioned to be able to handle this catastrophic event.” 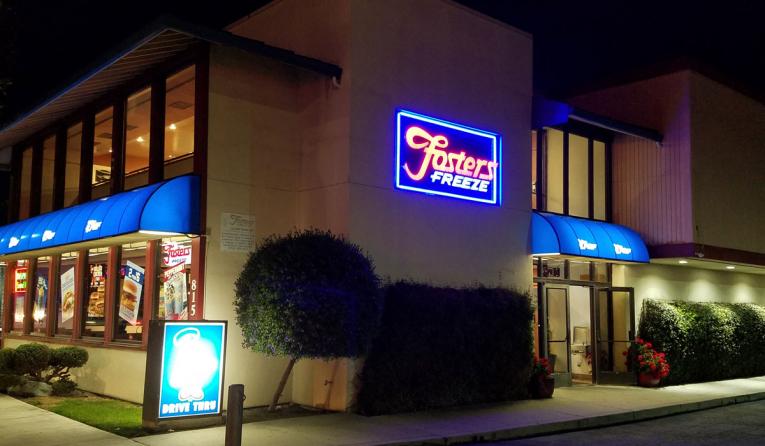 At one point, Fosters had more than 300 locations across multiple states.

“… We feel with a long road ahead before we can truly go back to our old ways of life, people are going to prefer safer drive-thru and walkup options like those offered at Fosters over dining in.”

To accelerate the turnaround, Neal and Nimesh used the tools they learned while working for major global corporations that know the industry. With such wisdom, the brothers were effective in working with operators to grant development/territory rights, roll out remodel obligations, negotiate with suppliers, and more.

However, the most important learning was creating an optimal relationship between franchisor and franchisees. That’s what makes a franchised system run, according to the brothers.

“They thought we were going to try and make all these changes,” Neal says. “And as we worked with them, we were more one-on-one personally working with them to make them understand. Now they understand the model. They're more likely to work with us and implement these changes versus ‘I don't believe you. Show me. Show me at first, and then I'll do it.’ So we have a lot of our franchisees that are doing these remodels understanding why we're doing things the way we're doing them. So far, they've seen positive results.”

Because of the success, the Dahyas often hear, “When are you coming to my state?” They know the demand is there, but they’re adamant about growing strategically. The key will be starting in the West Coast and expanding into Arizona and Nevada markets.

The goal is to go nationwide, but starting close to California will be the initial benchmark. Nimesh says there’s many residents in Arizona and Nevada who grew up with Fosters Freeze that are still attracted to the ice cream flavors and hamburgers. That makes for ideal markets, plus the added ease of logistics and distribution capabilities.

“And with headquarters nearby, the brand’s newest franchisees can look to corporate to be on-call for an added layer of support,” Nimesh says. “So we just want to be strategic on when, how, and where we expand Fosters Freeze.”

Neal describes Fosters Freeze as having a rich history. The brand at one point had more than 300 locations across multiple states, and the brothers believe they can reach that mark once again as the chain meticulously expands from West to East.

And unlike five years ago, franchisees have faith in the mission.

“We believe that Fosters Freeze has the potential to grow exponentially and have a presence across the country,” Neal says. “More importantly, Fosters Freeze can bring people in the community together and have a whole new generation of followers. Ultimately, we think there is no limit to how far we can take this. … Folks have moved from the West Coast to the East Coast and Midwest and they still know the brand and they want the brand.”