How Will Restaurants Approach Employee Vaccinations?

Three major brands have already announced incentives for workers. Others are plotting course.

As of February 2, some 6 million people have received both doses of the COVID-19 vaccine while 26.4 million have received one or more. In total, roughly 32.8 million doses have been administered.

It’s far off from the Trump administration’s prediction of 20 million vaccinations by the end of December. President Joe Biden promised 100 million vaccinations in 100 days, and recently said that total could increase to 1.5 million doses per day. The new commander in chief also noted that he feels confident the U.S. will be “well on its way” to achieving herd immunity by the summer.

So where do restaurants fit in? The CDC places workers in Phase 1c, which comes after frontline healthcare personnel, first responders, teachers, grocery store employees, and individuals aged 75 and older. The CDC estimates more than 70 million people are in Phase 1a and 1b, which suggests the U.S. isn’t close to reaching restaurant workers as February approaches. So now, it becomes a waiting game for operators across the country.

One looming question is whether restaurateurs will incentivize or even mandate the vaccination. The latter option appears to be a possibility, according to guidelines from the Equal Employment Opportunity Commission. The EEOC said the American Disabilities Act limits an employer’s ability to require medical exams, but the vaccine doesn’t qualify as a medical exam because it doesn’t seek information about an individual’s impairments or current health status. Therefore, employers have room to mandate vaccines if they can show an unvaccinated worker poses a “direct threat” that cannot be “eliminated or reduced by reasonable accommodation.”

But just because a restaurant has the power to do something, doesn’t mean it will. According to an operator survey from insights platform Black Box Intelligence, 39 percent of restaurant owners plan to recommend employees get vaccinated without an incentive. Thirty percent said they don’t have final plans, while 28 percent noted they will recommend the vaccine with an incentive. Two percent said they’ll mandate the vaccine, and another 2 percent said they won’t encourage or require it. Five percent of respondents told Black Box that vaccine policy “keeps them up at night” compared to 36 percent being concerned about additional restrictions and 22 percent being worried about policy changes with the Biden administration.

Kathy Dudley Helms, a member of labor and employment law firm Ogletree Deakins’ Coronavirus Taskforce and Healthcare Practice Group, said more vaccinated employees would be a plus for restaurant operators.

“Servers come into daily contact with customers about whom they may have little knowledge as to safety precautions those individuals are taking,” Dudley Helms said. “Accordingly, it may protect the restaurant employees if the servers are vaccinated. Furthermore, because indoor dining has been viewed as one of the areas where community spread is likely, knowing that a restaurant’s staff is vaccinated may help individuals to feel more secure and encourage them to dine with the restaurant or even go inside to pick up their food. The more assurance the public and employees can be given, the more likely it is that these businesses, even if slowly, are allowed to again open and hopefully open at a greater capacity.”

Olive Garden and LongHorn Steakhouse parent Darden Restaurants announced recently that it will pay employees to get vaccinated so that they won’t have to use paid sick leave. The company, which oversees more than 1,800 stores, is offering two hours of pay for each dose, with $20 per hour being the max rate.

“We recognize getting vaccinated is a personal decision that you alone can make,” CEO Gene Lee said in a letter to employees. “While we will not require hourly team members to be vaccinated as a condition of employment, we strongly encourage you to consider getting vaccinated.” 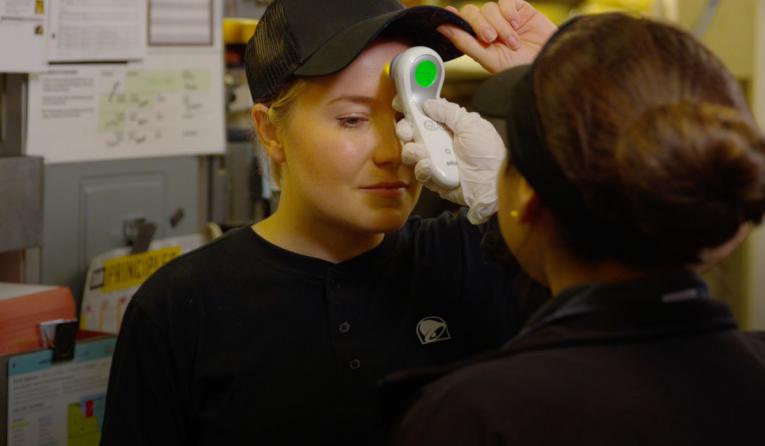 Taco Bell, like most restaurant chains, is taking precautions day-to-day with workers.

A similar trend is forming on the quick-service side as well. McDonald’s said it will provide four hours of pay for workers at company-run stores and corporate employees. Shake Shack said it will offer employees three hours of PTO for each dose, for a total of six hours.

Yum! Brands—owner of Pizza Hut, KFC, and Taco Bell—and Chipotle confirmed to CNBC it won’t mandate vaccinations for employees. Starbucks, which is lending employees to assist Washington State in distributing the vaccine, told the outlet that it hasn’t made a decision yet.

Manny Hilario, CEO of The ONE Group (STK Steakhouse and Kona Grill), says his brand will “look toward more direction from the CDC and other bodies that are smarter on the health component of this than we are.”

“Because to me, that’s going to be the ultimate answer to what exactly is going to be the expectation society-wide in terms of when people take it and what happens there,” Hilario says. “So we definitely have to get direction.”

Hilario adds safety is The One Group’s top priority. The company even has a committee that meets nearly every day to sift through all the health issues in today’s environment. Because safety is such a paramount area, the CEO says restaurants will apply whatever is best practice and always “err on the side of doing what is best and most safe for everybody.”

But at this point, he explains, it’s difficult to give specific guidance until all the issues are sorted by health officials.

“When the vaccine plays out, and we know more about that, we’ll follow the direction of the health authorities,” Hilario says.

Yavonne Sarber, co-founder of taco, bourbon, and tequila concept Agave & Rye, says her chain will not mandate vaccinations at any point. The full-service brand consists of six stores across Kentucky and Ohio, with six more on the way in 2021.

Sarber says her company will take the same approach it does with anything that’s optional.

“While we're going to definitely recommend the CDC recommendations and even recommend the vaccine, by no means will we fully ever mandate them doing it with this or any other things that we have the option of mandating,” Sarber says. “We feel as though employees have the right to do what they want to do with their body, and we're not going to tell them what to do.”

Gary Cohen, executive vice president of 38-unit Glory Days Grill, says he can’t give a direct answer yet on whether the sports bar concept will mandate vaccines. His indirect response is that his brand is in a “wait and see” approach. He personally thinks there’s so much pent-up demand for the vaccine that when it’s time for restaurants to get in line, the company won’t have to mandate it.

“Make them part of the solution which extends beyond themselves to their fellow workers, their own families, and people they do not even know,” Dudley Helms says.

He would hate it if Glory Days had to, but because these are uncharted waters, he won’t rule it out completely.

“So I'm hoping that it takes a natural turn that people will embrace it, and you do want to get it,” Cohen says.

Cohen says employees were affected by COVID, yet emphasizes Glory Days has strict protocols in place for wellness checks and exclusions. For example, if someone was exposed to the virus, they are automatically excluded from the workplace for 10 days.

“We're taking a lot of precautions for the safety of our employees and for our guests, and so far, that's working pretty favorably for us,” Cohen says. “From my boots on the ground research, my employees can't wait to get the vaccine. Time will tell whether we have to do that or not. I think for the most part, I would hope that we don't have to.”

Long John Silver’s CEO Blain Shortreed says his operators worked closely with local health authorities during the pandemic, and that partnership will continue throughout the year. He notes if there was a national mandate on how everything worked—such as a vaccine card—the situation would be easier to approach.

“Unfortunately, we're not in that situation,” Shortreed says. “We work state by state, and I think most of our foodservice operators work closely with the folks in their county to make sure that we don't want to take vaccines away from people that are more desperate to get them than we are.”

Shortreed estimates only six units have had multiple cases of COVID, and four of those occurred since Christmas. This makes him confident safety measures implemented in restaurants are working. The primary goal was always for consumers to feel safe when visiting the restaurant and for employees to feel safe coming to work. 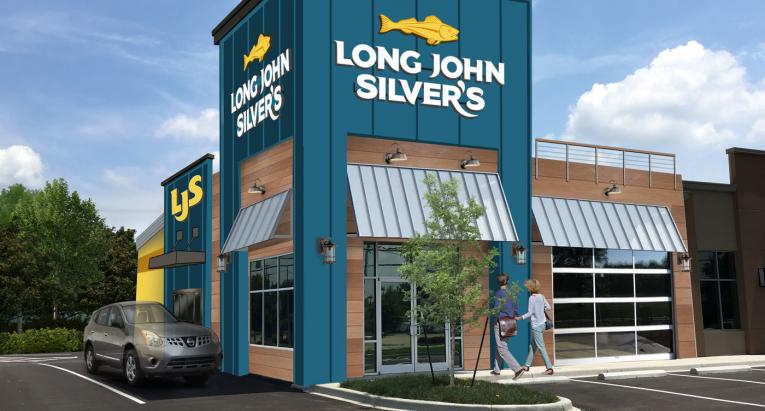 Long John Silver's has worked to keep employees safe since the outbreak.

The brand plans to take direction from public health officials and governmental leaders.

“We may find that as [President Joe Biden] did with masks being done in federal buildings, he may decide that all these levels of people have to be done by a certain period of time, and in that case, we'll do the call to action,” Shortreed says.

As the vaccine continues to roll out, data indicates that the U.S. is reaching a cautiously optimistic turning point. Hospitalizations have dropped each day since January 12. On February 2, hospitalizations were at 92,880, according to The COVID Tracking Project, the lowest mark since November 28.

Whatever restaurants decide to do, Dudley Helms urges operators to educate employees and remain transparent.

“Make them part of the solution which extends beyond themselves to their fellow workers, their own families, and people they do not even know,” Dudley Helms says. By keeping the workforce healthy, the company remains able to serve its purpose and the economic stability of the company is aided. Accordingly, jobs in general become more secure [be careful not to promise any one individual his/her job]. This is part of bringing this nightmare to an end and they can be part of that.”

Thanks to COVID, Digital Potential is Now Limitless for Restaurants
Is the Restaurant Industry Facing a Hiring Crisis?
How COVID Clarified Fast Casual’s Past, Present, and Future

Are Conveyor Belts Safe to Serve Up Restaurant Food?
Applications for the Restaurant Revitalization Fund to Open Monday
How COVID Accelerated Tech Changes to the Restaurant Industry