Pal’s Success and Longevity is Anything but Sudden

The cult-favorite burger chain has built a brand customers can count on.

Perhaps the only certainty in restaurants these days is a lack of it. What’s on a brand’s menu, what it costs, if it’s available, and even what channel somebody can order it from (and how it’s dynamically priced in response)—all are as unstable as the supply and labor backdrop operators continue to weather. This isn’t lost on Pal’s Sudden Service, brand president and chief operating officer Adam Crosby says. In fact, it’s only served to clarify a 67-year-old mission statement.

“One of the key elements of Pal’s is that we don’t try to play games with the customers,” Crosby says. “We don’t have loyalty programs. We do not discount. We don’t do bundled meals. Pal’s menu is a la carte, all the time.”

It’s not surprising to see the 31-unit brand, founded by the late Pal Barger in 1956 on Revere Street in Kingsport, Tennessee, sidestep the tide. The vivid blue restaurants adorned with giant hot dogs, hamburgers, fries, and drinks produce $2,500 in sales per square foot (many leading burger brands are closer to $650) and boast 18-second wait times per order for customers.

Steadfastness and consistency are as relative to Pal’s DNA as its “sudden” service is.

Amid recent marketplace turmoil, Crosby says, Pal’s leaned firmer into those roots. “We’ve stayed really focused on providing value,” he says, “making sure that we have face-to-face ordering so there’s a good, hospitable experience.”

What Crosby is referencing is another Pal’s foundational piece. Customers pull up to a window and place their orders face-to-face with an employee, as opposed to a speaker or monitor. This harkens back in time, too. While the first two locations were walk-ups, Barger decided to switch to a drive-thru model when the brand started to expand in the early 1980s.

Still, though, there would be no sit-down service. Guests order, pull around to the other side of the facility, grab their bag, and drive off. It breaks down as an average of 18 seconds at the handout window to place an order and 12 seconds at the drive-up window to receive the order. It’s a bit convoluted to compare to other brands, from the service model to where the clock actually starts, but for a broad perspective, Taco Bell paced the chains studied in this year’s QSR Drive-Thru Report at a total of 221.99 seconds.

What might be more illuminating comes from a case study conducted by Fast Company cofounder Bill Taylor is his 2016 book “Simply Brilliant.”

He found Pal’s double-drive thru stations, despite getting guests across in under 20 seconds, made a mistake only once in every 3,600 orders. It’s a stat, from a high level, that crystalizes Pal’s near-mystical speed of service—“almost none [of the customers] bother to check their orders before they drive off,” Taylor wrote.

And this starts at the window as well. To Crosby’s point, Pal’s doesn’t suggestive sell or try to influence somebody’s ordering experience. It’s a quick, friendly interaction with a mountain of training behind it. Pal’s Triple 100 culture (100 percent execution 100 percent of the time, even when restaurants are operating at 100 percent of capacity), takes some 120 hours of training before employees work on their own, and everybody needs to be certified in each role, including taking orders. According to Taylor’s study, Pal’s also, on every day, uses a computer to randomly generate the names of two to four employees to be recertified in one of their jobs, like a pop quiz. The average employee receives two or three a month. If they fail, Pal’s retrains before they get assigned to that task again.

Pal’s business model is anchored by operators who run each store. This single-unit approach is akin to putting a chairman of the board, president, and CEO of an enterprise at the controls of every location. 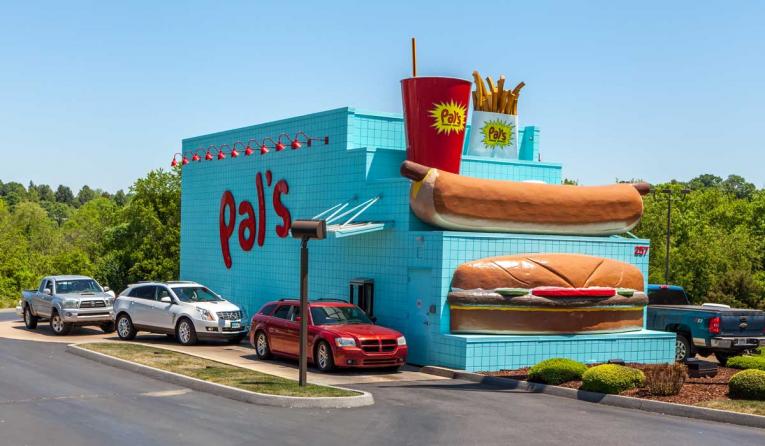 "We’ve just stayed true to what we are, which is trying to have a fantastic experience when you come to eat with us," says Adam Crosby, president and COO.

Adam Crosby says it empowers communication and training from the top down. These operators are in their store daily. “Anybody they hire is going to get to work shoulder-to-shoulder with them,” Adam says. “They can communicate directly with that owner. So we feel like our system doesn’t have some of the frustration in it that maybe others do because, hey, ‘I feel like as an employee I have direct communication with somebody who can make a change.”

There are less tangible threads that result from the system as well. This “CEO” understands the personal touch it takes to offer real-life flexibility. Say somebody’s sister is having a baby, or a family member is sick, etc. There’s no corporate disconnect.

In 2019, Pal’s also launched an employer of choice program that dug into hourly pay. The brand wanted to top its region and sector and layer in benefits to attract and compete with the best. “But we feel very strongly that the differentiator for us is the culture, and just that piece of I get to work side-by-side with the owner every day—the owner is here,” Adam says. “I’m seeing them work hard. And this leads to a more positive work environment that people enjoy coming to.”

In addition, Pal’s menu is a no-frills lineup that doesn’t bog things down (a Sauceburger, large Frenchie Fries, and a sweet tea is the most popular order). The brand’s strategy of two to three LTOs per year has worked for more than a decade. Each LTO is built to be easy to execute during peak times.

For instance, a recent launch was a late summer Cotton Candy Milk Shake that tapped into the comfort vibe on the mind of consumers of late (according to Datassential, 75 percent of diners are hungry for something new on menus and 55 percent say they are in search of nostalgic flavors).

Pal’s previously had success with a Creamsicle flavored milkshake it called the “Orange Delight.” The Cotton Candy iteration spun off memories of county fairs and late, hazy days of summer. The LTO posted a new sales record and lifted all shake sales by more than 70 percent during the promotion.

Pal’s has always taken a surprise approach to its menu versus trying to bloat it with fresh offerings or deals. Guests know what to expect, employees know how to make it, and it all happens as quickly as possible. Then, LTOs complement the calendar, offering value in the form of something new instead of something old repackaged. 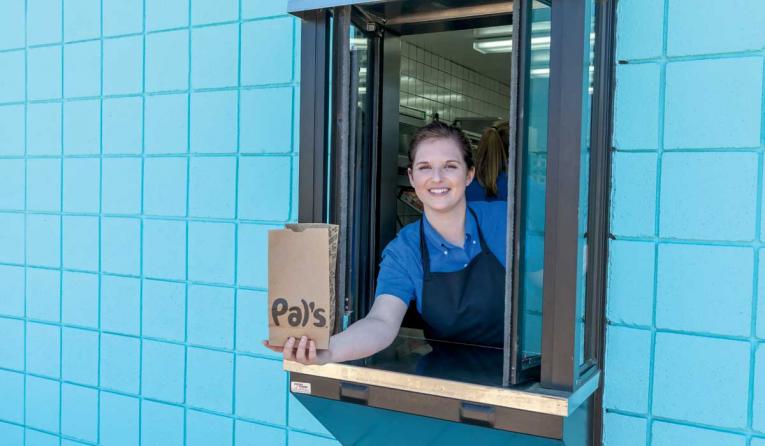 Pal's employees are empowered to learn and master skills within the restaurant.

Another Pal’s philosophy ties in: “word-of-mouth” marketing remains the golden egg from executives to build awareness. “We feel like you get the best word-of-mouth marketing by having excellent execution,” Adam says. “I feel like sometimes people forget that, or they think marketing is this cute little thing you do. We feel like if you execute well, or if the order is right, hot food is hot, cold food is cold, and they have that great experience with your employees, they have great food experiences, then that’s something people are going to want to talk about.”

Pal’s is going to focus on what it can control, he adds. Execution, hospitality, quality. “If we do that, there should be positive news out there about us,” Adam says. “We think that’s a big element of our loyal customer base that visits us multiple times a week.” Pal’s does trickle in traditional marketing—as seen in the LTO ad—but the true base of its brand is built on the cult-like ardor of its customers. “Ultimately, it’s that experience they have when they choose to come through us and spend their hard-earned money with us,” Adam says.

The repeatable, consistent menu helps ease labor. Pal’s, through the methods mentioned before, tries to avoid having workers who feel lost on the job. The brand wants employees to know what’s expected of them and feel confident they can achieve it.

Pal’s has brought tech into the fold, yet the mindset still aligns. The company tested outside order takers, similar to Chick-fil-A and In-N-Out, and developed in-house systems around training and scheduling. Yet mobile apps? “So who wants an app for a restaurant on their phone when we all already probably have hundreds of apps on our phones anyway?” Adam says.

If Pal’s needs something that’s going to reach out and the customer is going to touch the brand, he adds, the company would rather focus on its website and make sure it seamlessly translates to mobile than get into an arena guest doesn’t appear to be asking for. Pal’s always starts innovation where its customers live.

“They’re not being directed to any app stores, downloading an app, anything like that. It’s all about convenience to the customer,” Adam says. “I think some people get it wrong and think to install an app, if we use this loyalty program, they’re going to be more loyal to us. But it’s actually just adding in hassle to the customer. I think the customer does appreciate that we haven’t had any of that brand drift. We’ve just stayed true to what we are, which is trying to have a fantastic experience when you come to eat with us.”

Pal’s is looking toward growth. However, its unique, in-store operator model lends itself more toward a methodical approach. The brand will only consider expansion when there’s a restaurant leader 100 percent trained and ready to take on the store. It builds units for people to run them; not the other way around. “Executing from day one to the standards that we want to hit,” Adam says.

That bench is something Pal’s constantly nurtures. And it’s high stakes. “It does take time,” Adam says.

The process is a combination of external recruitment and identifying internal talent. Whoever is tapped, though, Adam says, they need to be a “true believer in the brand.” All of these ticks and traits that make Pal’s a category outlier have to course through the veins of the operator. How do you find that person? As difficult as the past couple of years have been, hardships did uncover some answers. “I think where a lot of people think, ‘oh things have got so hard,’ or they were so frustrated at work, if we had somebody who was saying hey, ‘I enjoy this challenge. I like this. I like the newness of the things that are going on. Each day is kind of difficult. It’s a puzzle to solve. It’s a problem to solve.’ Those are definitely the key indications that this might be somebody for us to focus on,” Adam says. The timeline from entering the pipeline to getting a store is about a 48-month process.

In Taylor’s case study, he highlights some of Pal’s overall screening process for employees at all levels. Among the agree-disagree statements: “For the most part, I am happy with myself;” “I think it is best to trust people you have just met;” “Raising your voice may be one way to get someone to accept your point of view.”

The end result, Adam says, is a brand with as much buy-in across the system as there is from customers who swear by it. The belief goes both ways.

“We want to make sure we have an environment where people are all friendly with each other,” he says. “That culture piece always matters.”