LocoL, the healthy fast-food concept from chefs Choi and Daniel Patterson, opens after a year and a half of planning.
Web Exclusives | January 21, 2016 | Bruce Horovitz

Roy Choi isn’t just trying to turn fast food on its head. Before he’s all done, he aims to turn the entire restaurant industry—if not the entire domestic food industry—upside down and inside out.

Some words of advice to restaurant industry executives who might snicker at his lofty goals: Ignore him at your peril.

For the moment, Choi and business partner Daniel Patterson are outliers. The successful California chefs and restaurateurs have a mission to make healthy food accessible to all. Their first combined effort, LocoL, which opened Monday with much hullabaloo in the Watts neighborhood of Los Angeles, is squarely aimed at offering delicious, nutritious, quality food to under-served consumers who need it most—and at McDonald’s-like prices.

After just days in business, LocoL’s already got national mojo. It’s got the mainstream media, who have been following the project for more than a year, eating right off of its reclaimed wood tables. It’s got a new generation of consumers squarely on board. Most importantly, it’s got what it claims is a workable plan to change the way America eats.

“It’s not like we had a choice,” says Choi, who originally made his mark in Southern California by turning the image of food trucks from roach coaches to quality cuisine. “Our lives have led us to this moment, and it’s time to feed people better.”

“Our lives have led us to this moment, and it’s time to feed people better.”

The grub at LocoL is dirt cheap, but made from scratch. There are $4 “burgs” (proteins mixed with grains), $2 “foldies” (folded tortillas stuffed with carnitas, beans, cheese, and healthy fixin’s), and even quality coffee for $1. But LocoL is not just about food. Its employees are mostly from the neighborhood, in an effort to lift the area’s dire unemployment picture. And LocoL’s karma is contagious. Even the name is a cultural combo of the English word local and the Spanish word loco, which means “crazy.”

Perhaps the can-do spirit of Ray Kroc is watching from afar. But instead of industrializing fast food, Choi and Patterson aim to de-industrialize it, starting in Watts—a veritable food desert whose image was cemented in the American psyche with the 1965 Watts Riots. Watts has the highest percentage of families headed by single parents in the Los Angeles area.

“If this movement can begin in Watts, everything else will flow from here,” says Choi, who is regarded by locals as a rock star making music with his spatula. Plenty of SoCal celebs showed up for the standing-room-only grand opening, including former football great-turned-community activist Jim Brown, actor and director Jon Favreau, and Los Angeles Mayor Eric Garcetti.

LocoL reflects a new way of growing, cooking, selling, and eating food. “It’s no longer OK to make and sell a product that results in the people who eat it suffering,” Choi says. “Maybe that was OK with Baby Boomers, when the public conscience was controlled by the very few. But that was before the Internet and before information could be widely shared.” 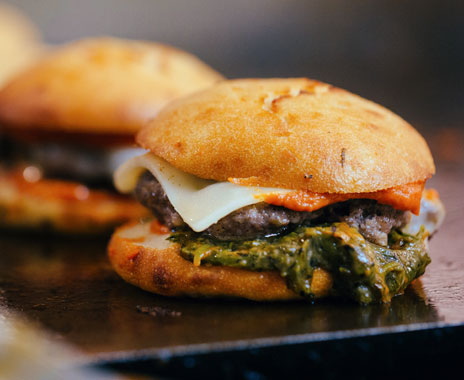 His business partner, Patterson, is a trend-setting chef in the San Francisco Bay area, where he runs the edgy restaurant, Coi, which focuses on wild ingredients and essential oils.

Meanwhile, Choi, who was born in South Korea, says much of his learning curve came from creating and running Kogi, his gourmet Korean taco truck company. He’s widely regarded as a pioneer of the national food truck movement that’s now a $1 billion–plus industry. He also opened two Millennial-magnate restaurants, Chego and A-Frame, both in the L.A. area.

Now, Choi is taking the next step, with plans to bring quality fast food to impoverished neighborhoods in California—not with trucks, but with brick-and-mortar restaurants.

Later this year, LocoL plans to open locations in other neighborhoods that few restaurant chains would even consider, including East Oakland, the Tenderloin District of San Francisco, and Compton, California. They’re considering another location in Watts, as well.

Although LocoL was initially crowdfunded, it has since found some key investors whom Choi declined to name. “They saw the same vision that we saw,” he says. “We’ve very old-fashioned people. We cook real food.”

Choi’s vision seems to have few limits. Within 10 years, he says, he hopes LocoL will have as many as 10,000 locations—not just restaurants, but possibly neighborhood food stores, as well. He also hopes LocoL will ultimately provide quality food for institutions like schools, hospitals, and prisons.

“I don’t know how many years I have left on this planet, but my next chapter is all about empowering communities to change the balance,” Choi says. “We’re riding the Big Kahuna. It’s a spiritual wave that’s going to change the way we eat.”

But can two well-meaning foodies actually make a dent in a world laden with fast-food options?

“There is no question in my mind that Chef Roy and Daniel both bring all of the honesty, sincerity, and respect that it will take to make LocoL a success,” says Frank, the P.F. Chang’s cofounder. But even then, he cautions, “It is the consumer who will decide if it is going to change fast food as we know it.”

Freelance writer Bruce Horovitz is a former USA Today marketing reporter and Los Angeles Times marketing columnist. He can be reached at brucehorovitz@gmail.com.