The chain is backed by a triumvirate of marketing and culinary power.

Big Chicken was born three years ago from the collective minds of a culinary dream team, says CEO Josh Halpern.

One part of the triangle is Authentic Brands Group, a brand development, marketing, and entertainment company that owns the likeness rights to Sports Illustrated, Elvis Presley, Marilyn Monroe, Forever 2021, Van Heusen, Aéropostale, and soon, Reebok. Halpern describes Authentic Brands as “one of the best marketing companies on the planet,” and claims he has yet to meet anyone who doesn’t own at least five articles of clothing from a brand the company owns.

In another corner is JRS Hospitality, a Las Vegas-based events and catering company known for its parties, private dining, and corporate gatherings at venues such as Cabo Wabo Cantina, Beer Park, and Hexx Kitchen + Bar. The group earns north of $100 million in revenue on the Las Vegas strip and is spearheaded by Matthew Silverman and Matthew Piekarski, two “world-class chefs,” Halpern says.

The final part—NBA Hall-of-Famer Shaquille O’Neal—is the biggest part of the trio, literally and figuratively. The entire Big Chicken brand is based around the life of the 7-foot-tall celebrity, and leverages his sizable marketability and restaurant experience with popular brands like Krispy Kreme and Papa John’s.

The emerging fast casual has two brick-and-mortar locations in Los Angeles and Las Vegas, and another nontraditional spot on Carnival Cruise Ship Mardi Gras, but onlookers should expect that unit count to rise fairly soon. After formulating a transparent and capable ecosystem in which operators could thrive, the three-unit chain is now prepared to franchise and expand the Shaq-led concept nationwide.

The CEO explains that Big Chicken isn’t meant to be the “Shaquille O’Neal Museum of Chicken,” but when customers walks inside the restaurant, his presence is felt. Chicken sandwiches are named after someone important in his life, such as the “Charles Barkley” chicken sandwich (mac and cheese, crispy fried onion rings, roasted garlic barbecue aioli), named after fellow NBA Hall-of-Famer Charles Barkley, who is also O’Neal’s broadcast partner. Then there's Lucille’s Mac N’ Cheese, named after his mother.

With active involvement from O’Neal, it took Piekarski and Silverman six months to get the breading right. As for beverages, the culinary team used more than 50 gallons of milkshake mix before finding the right Southern vanilla blend. Additionally, the team took time to develop a cookie with the circumference of an NBA basketball.

Aside from the menu, O’Neal’s footprints are imprinted near the soda machine, and every restaurant includes one chair substantially bigger than the rest, representing a size fit for a 7-foot-tall man.

“What we don't want is for it to feel cheesy or gimmicky because Shaquille doesn't want that. None of the partners do. We want it to feel very, very authentic,” Halpern says. “This is Shaquille really telling his story about his love of chicken and the people that he loved it with through the years.” 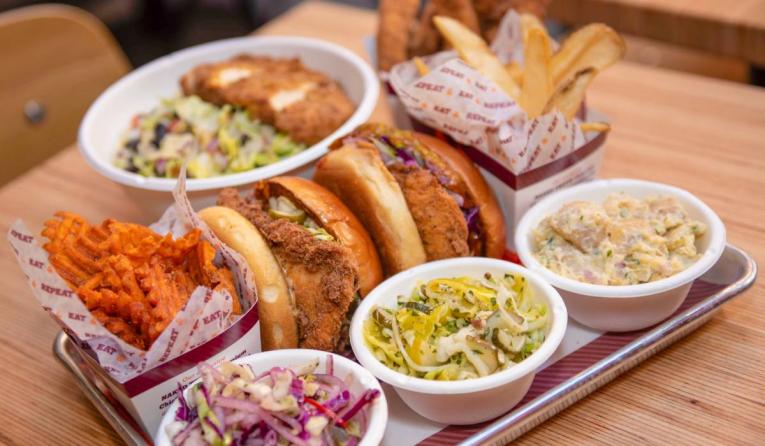 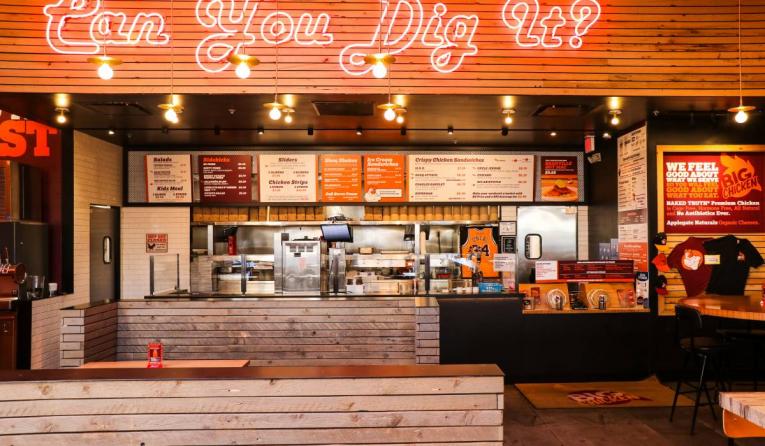 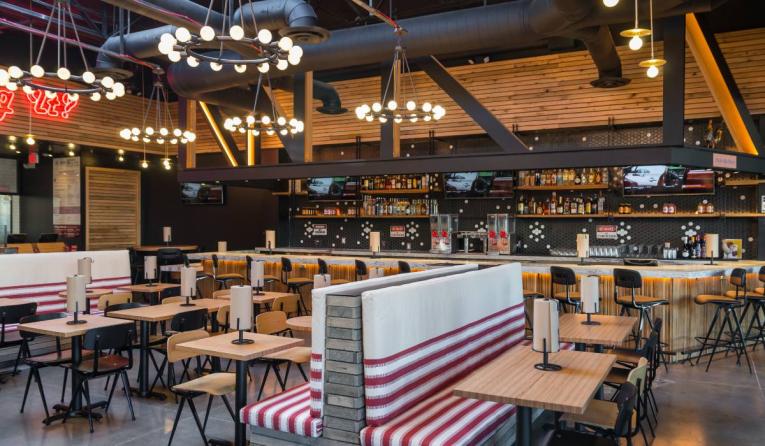 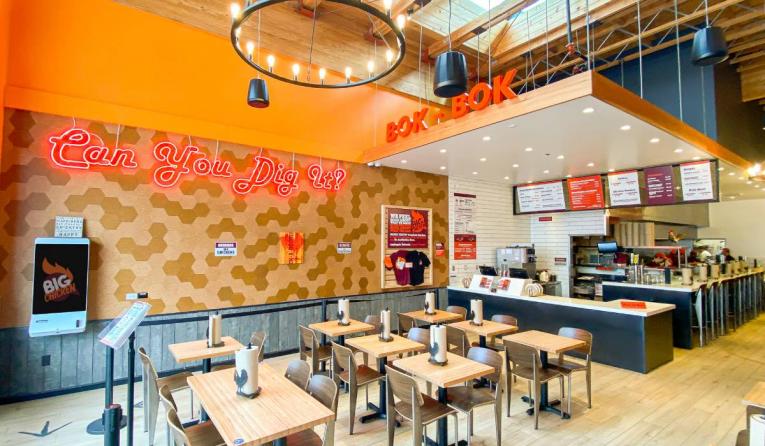 “The beautiful thing about the way the company’s set up and the way our ownership group operates is we’re built for speed, but speed with the right infrastructure and backbone behind it,” Big Chicken CEO Josh Halpern says.

Halpern says Big Chicken doesn’t have a specific demographic, and that’s rang true at both brick-and-mortar stores and the cruise line location. A good portion of customers associate O’Neal with his basketball career and will try the brand based off of that knowledge, but Halpern estimates a majority of O’Neal’s followers on social media—more than 50 percent or so under the age of 24—never saw him play basketball. When Halpern stops by for lunch, he sees groups of friends, families, and business colleagues.

“We're seeing people come in for different reasons, but they're ultimately coming in for the same basic reason,” Halpern says. “They're coming in the first time because they want to feel that authenticity to Shaquille and they keep coming back because it's a fast-food concept that was built by two top-notch chefs. So the food is really strong and some of the menu items we’ll surprise and delight you. I've never seen macaroni and cheese on top of the chicken sandwich until I started working with Big Chicken.”

Seven restaurants are in the development pipeline, including two more outlets on Carnival Cruise ships and a handful of spots in sports arenas, like the Climate Pledge Arena in Seattle, the UBS Arena in New York, and the Moody Center in Austin.

To support growth, Big Chicken hired Wetzel’s Pretzels and Jamba veteran Dede Hilovsky to build a training program similar to a 500-unit chain, Halpern says. The company has also partnered with Marci Rude, a growth specialist with experience at Thirsty Lion, Kona Grill, and P.F. Chang’s. The CEO expects Rude to be instrumental in advising franchisees to make the best real estate decisions. Each store will be between 2,400 to 2,800 square feet, with a dine-in to off-premises mix that will hover around 70 percent to 30 percent. Big Chicken is open to both suburban and urban locales; the main key is access to daytime traffic, since lunch is such a strong daypart.

The fast casual prefers multi-unit franchisees—with either traditional or nontraditional restaurant experience—that can help build hubs across the U.S. and internationally.

“Shaquille has one of the highest popularity ratings on the globe among major celebrities, and as a result, interest comes from everywhere,” the CEO says. “Then it becomes just the age-old question of, do we have the capability to do it based on where it's going.”

“He's a very busy guy, has a lot going on, but he always finds time for Big Chicken,” he adds. “I think he really enjoys having a concept that's his own while simultaneously being able to partner with really great companies like Papa John's and Krispy Kreme on developing their companies, as well.”

Brick-and-mortar will be the main source of expansion, but the chain does have a budding partnership with Ghost Kitchen Brands to open multiple ghost kitchens throughout New York. One recently opened inside a Walmart in Rochester, New York.

Halpern anticipates entering four markets in Upstate New York by the end of September. The executive acknowledges that without the partnership, it would’ve taken quite some time to bring in a franchisee to represent those areas, and even if the chain did find an operator, there still would be much space with which to operate. The CEO views the Ghost Kitchen Brands relationship as a way to drive trial with Walmart consumers as the restaurant leverages brick-and-mortar stores to fuel frequency and loyalty.

More growth announcements are scheduled to be released in the next few months, according to Halpern. Busy times are ahead, but every level of operations is prepared.

“The beautiful thing about the way the company’s set up and the way our ownership group operates is we’re built for speed, but speed with the right infrastructure and backbone behind it,” Halpern says.