Subway Steps Up to the Curb

The world's largest restaurant chain tackled a "logistical feat" to get food to guests, however they want it.

With Subway, the conversation often comes back to scale. In November, the chain officially rolled curbside nationwide to more than 11,000 U.S. locations. While a widespread COVID-19 response from restaurants, few had the undertaking of onboarding up to 1,800 restaurants per week like Subway did. And it still has plenty of opportunity to chase (there were 23,802 domestic locations heading into the year).

The benefits, however, were quick to surface. Renee Hourigan, senior director of off-premises innovation at Subway, says the brand entered COVID-19 with a stellar and growing delivery business. “But we knew we had other options and wanted to lever up all of those for franchisees,” she says. “That’s really where the idea behind curbside and getting it stood up and rolled out as quickly as possible was born.”

Unlike many competitors in this size realm, Subway does not boast a heavy drive-thru base. So it needed curbside to mirror some of the typical targets, namely serving customers who didn’t want to get out of their cars, but who also didn’t want to front the fees tied to delivery.

“I had one franchisee who said one of my store managers calls it her drive thru because really it’s allowed a lot of our Subway locations to compete with having that additional accessibility,” Hourigan says.

Those kinds of figures are COVID-influenced behaviors many drive-thru chains observed as well. Starbucks and Dunkin’, for instance, saw the channel boost mid-morning and afternoon business throughout the pandemic. Others reported steadier business during the week, while larger orders at the drive-thru, as well as via carryout, have represented one of the more stable pandemic trends. Returning to Starbucks as a case point, the chain’s Q4 average ticket jumped 17 percent.

The notion, essentially, is fewer solo occasions and routine-fueled, passerby business (like spontaneous lunch visits and on-the-way to work coffee). Meanwhile, more group orders and meals intended to serve the whole family or last a few days. Accessing that latter occasion through mobile order ahead, at the drive thru or curbside, is a lot more convenient than walking in the front door. And perceived as safer.

Again, to the sheer size of the task at hand, Subway wanted to make sure it checked some key boxes, Hourigan says. It started with devising an intuitive experience for customers that was consistent and not a giant leap from other, currently offered options. On that same token, make sure it wasn’t overly complex for franchisees. “That was important,” she says. “… because in addition to having this new program, they were obviously going to need to train all of their staff on it, and do that during a time when we were adapting to so many other things as well.”

Subway worked with its technology team to leverage the company’s existing ordering platform. Both Subway.com and its app are points where a guest can enter a curbside order. They come through the same back-end channels Subway was used to, just marked as curbside.

A notification flashes on the point of sale to let the “sandwich artist” know the guest arrived.

In-store training focused on simple, yet critical COVID notions. Things like wearing masks and gloves. But also ensuring orders were presented to guests on trays and sealed with tamper-proof stickers. 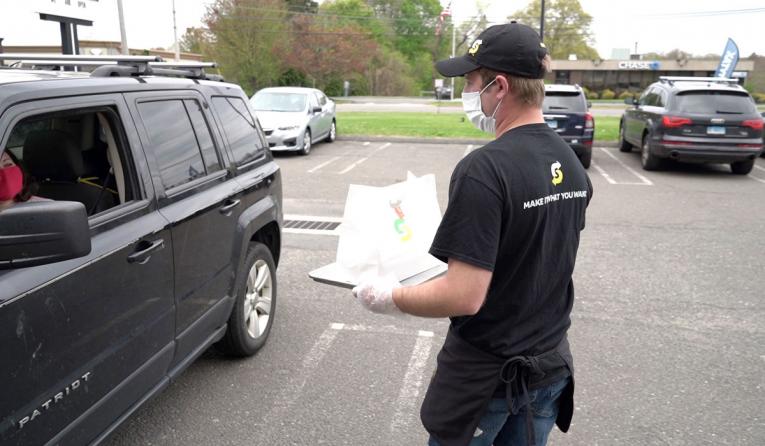 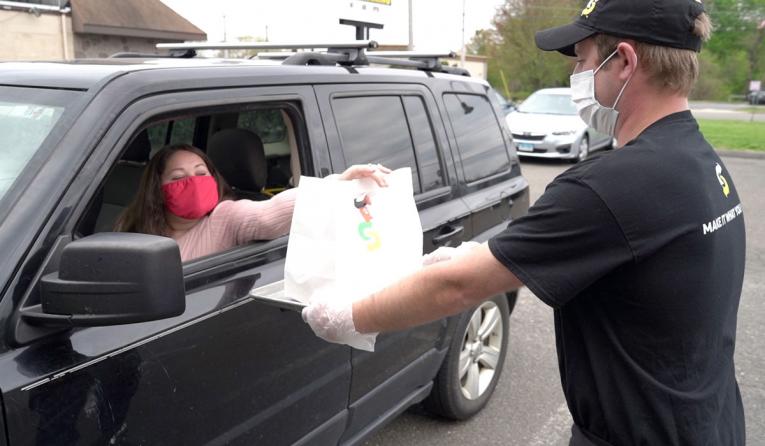 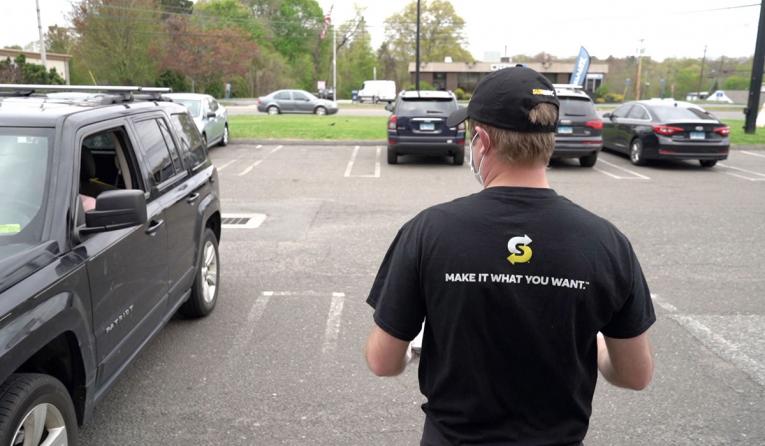 Subway has put the full weight of its marketing behind curbside of late.

Subway also created and distributed marketing collateral to promote curbside, including signage for restaurants. Hourigan calls this a “logistical feat,” given the thousands of components. There are window signs to market the option and parking signs to designate curbside spots. Subway funded the items for franchisees so there would be no added cost if they wanted to participate.

For those who have, Hourigan says, customer feedback stretched past convenience. Guests enjoy the control and not being beholden to the length of the line at the time they pull up. Or simply finding a different option to the packed drive thrus available. Also, Subway’s food holds well. “We don’t have that soggy French fry problem,” she says.

On the heels of curbside, Subway worked on another lead off-premises initiative. Starting in September, it quickly added pickup shelves into restaurants for to-go orders. They’re now across nearly the entire U.S. and Canada system. Customers walk in and grab their meals without going to the counter. There’s also a designated shelf for third-party delivery orders.

“We’re really reducing the need for them to spend too much time in the restaurants if they like to get in and out,” Hourigan says. “And certainty, reducing the contact and increasing convenience.”

In regards to curbside specifically, Subway threw the full weight of its marketing behind it.

As part of its sponsorship of the National Football League, Subway engaged legend Deion Sanders to get the word out. Sanders even asked to deliver some curbside orders himself.

Subway spotlighted TV, social, direct-channel advertising, PR, and then had Sanders chime in on his own account. Hourigan says those efforts will continue, especially as restaurants grapple with COVID cases surges and, potentially, additional dining room closures. “We want to make sure that guests understand that curbside is an option for them,” she says. “And again, from some of the guest feedback we’ve seen from our different channels, we’ve got their comments, people say that when they know Subway has curbside, they’re going to be coming back more often.”

Additionally, Subway continues to drive increased adoption of its third-party delivery platforms. It’s connected with Postmates, Uber Eats, DoorDash, and Gruhub, and is working to improve rates and franchisee economics so operators are able to open up the channel when they need it most, Hourigan says.

Hourigan joined Subway in April 2019 as director/convenience and innovation, coming over from VP of marketing for Victorinox Swiss Army. She assumed her current role, fittingly, in March, ahead of the most off-premises-centric stretch in the history of running a restaurant.

Hourigan collaborated with chief operating and insights officer Mike Kappitt, who took on the newly created role in April after serving as president of Carrabba’s Italian Grill.

“I had an amazing leader really helping and guiding through that process,” Hourigan says of Subway’s early COVID response and working with Kappitt.

At the onset, she adds, it was difficult to gauge next steps since data was so difficult to capture and dissect. Nobody had operated in this landscape before, naturally, or tried to satisfy this kind of customer afraid of other customers. As time progressed, though, some interesting points emerged. One in particular, Hourigan says, occurred in the late spring, early summer as cases lightened somewhat. Subway figured delivery’s prevalence would slide as dine-in returned.

How Subway interprets this is that COVID cleared the adoption gap for convenience. Customers who might not have tapped delivery previously did so because they had no choice. “And then they realized it’s something that they like to do,” Hourigan says. “It adds convenience to their day and whether or not they are able to leave their house and get to a restaurant or do other things, it’s really become part of the fabric of their day. And so they’ve maintained it.”

Thus, one of Subway’s speculations with a COVID resurgence is that the habit will hold for curbside just like it did for delivery. Meaning there’s real potential for the channel to continue well after the pandemic.

One of Rakuten Ready’s top trend forecasts of 2021 was indeed “A-Commerce,” or auto commerce. According to The Washington Post, people spend more than 200 hours per year on commutes (this was before COVID), in addition to the time running errands and going on trips.

So people were eating in their cars even when their personal safety wasn’t at stake. Will the added layer open up a new realm of dining that will reshape the landscape for purchases that require immediate fulfillment?

“Purchasing safely from our cars, we believe, has the potential to make consumers’ lives considerably more convenient, and we believe that the passive communication of geolocation between consumer and merchant will be a critical enabler of the best A-Commerce experiences,” Rakuten said.

“It is a little tricky reading the data because we’re still in unknown waters, but given what we saw spring and into the summer, we’re starting to get a better grasp of what we can potentially expect in this very interesting time and therefore influence what decisions we make going forward,” Hourigan adds. “There are so many things we used to do and had patience for that we simply no longer do.”

Regardless, Subway’s franchisee system is going to key the progress. “As we said, it’s not an easy time. There’s a lot being thrown at franchisees from everywhere,” Hourigan says. “... And yet, the enthusiasm that we saw—that’s really the thing that made it all possible and continues to make it possible, and what I know will make it successful.”