The chain has an AUV of roughly $4.3 million.

By the end of 2022, the chain intends to reach 40 locations nationwide.

With hundreds of thousands of restaurants permanently closing in 2020 and hundreds of billions of dollars lost throughout the industry, no one could blame him for being so nocturnal.

Despite the concerns, he’s found that Velvet Taco has only become stronger. The chain improved its operating model to drive more profit and support employees. It also moved forward on store growth, opening four units during 2020. These restaurants broke sales records, and all heavily leaned into takeout and delivery. The chain has had several new stores that earned $100,000 in sales their opening week. The brand has an AUV of roughly $4.3 million.

Since Dover took charge of Velvet Taco in 2017, the concept has grown from four units to nearly 30, and that’s only the beginning. By the end of 2022, the chain intends to reach 40 locations nationwide. Founded in Dallas in 2011, Velvet Taco has been majority-owned by private equity firm L Catterton since 2016.

“Our mantra is to be relentless, never settle,” Dover says. “So we're always trying to improve on everything that we do every day.”

The expansion comes as consumers crave adventurous flavors and show eagerness to try something new, Dover says. The brand is completely taco-centric and without bowls, wraps, or other variations typically offered by its competitors. Velvet Taco offers unique taco flavors like Buffalo chicken, spicy tikka chicken, Nashville hot tofu, and shrimp and grits. The CEO describes the menu as a “culinary forward global fusion of flavors and cultures.” Everything is made from scratch and no freezers are allowed. Dover says Velvet Taco is in a special position to offer food comparable to fine dining, with the convenience of a quick-service concept, which has resonated in every market.

The brand’s growth is concentrated in six cities—Atlanta, Austin, Charlotte, Chicago, Dallas, and Houston. The brand will continue to grow in both existing and new markets, with San Antonio and Nashville among the latest growth areas. Velvet Taco has 10 sites under construction with signed leases that will open next year. Recently, the chain opened units in College Station, Texas, and Norman, Oklahoma—home to Texas A&M University and the University of Oklahoma.

Notably, Velvet Taco has purposefully chosen to only engage in corporate store expansion, with no plans to franchise in the near-term. Dover says Velvet Taco has a special, complex brand, and the company wants to protect it.

Every store is a one-of-a-kind restaurant designed for each community. Some were built from the ground up, while others feature drive-thru windows. All of them offer a unique feel and showcase local murals from neighborhood artists, Dover says. On average, stores are 2,500 square feet, but Velvet Taco does have a 400-square-foot food hall location that earns $30,000 in weekly sales. 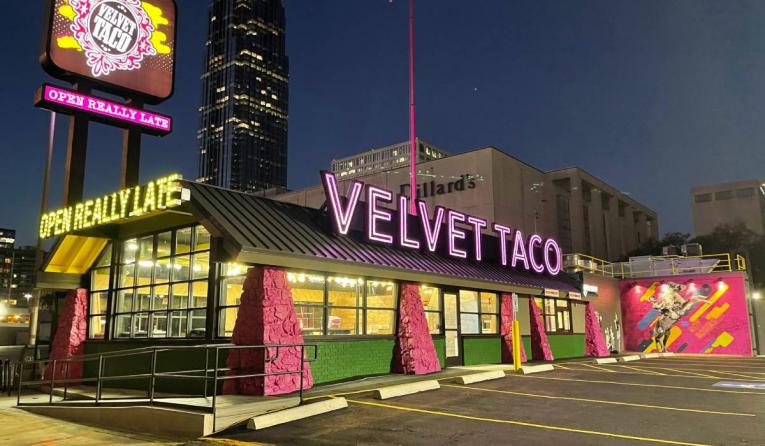 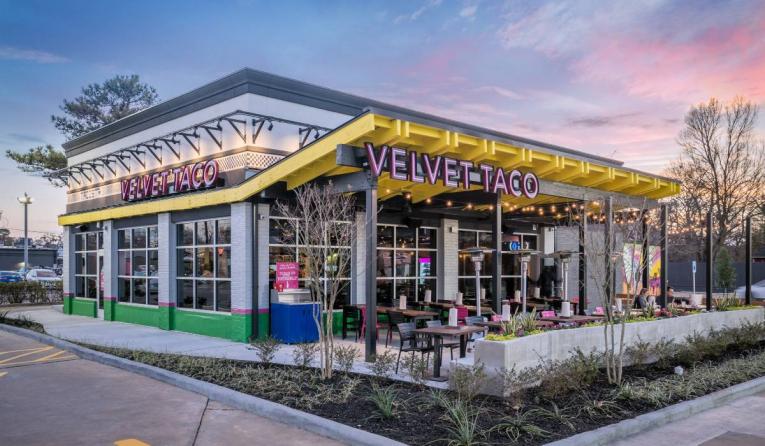 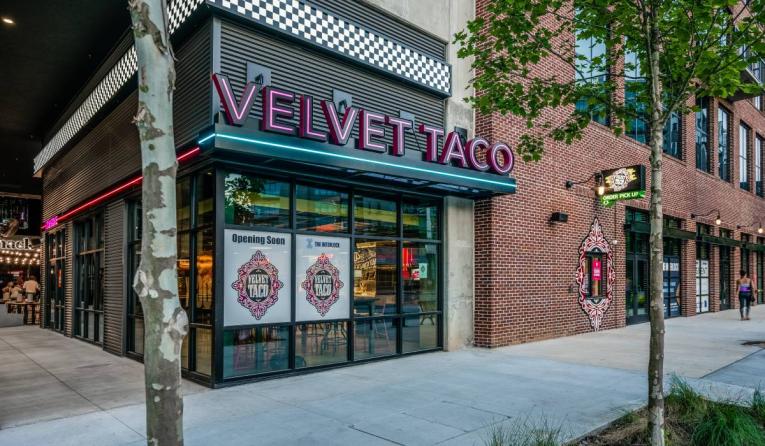 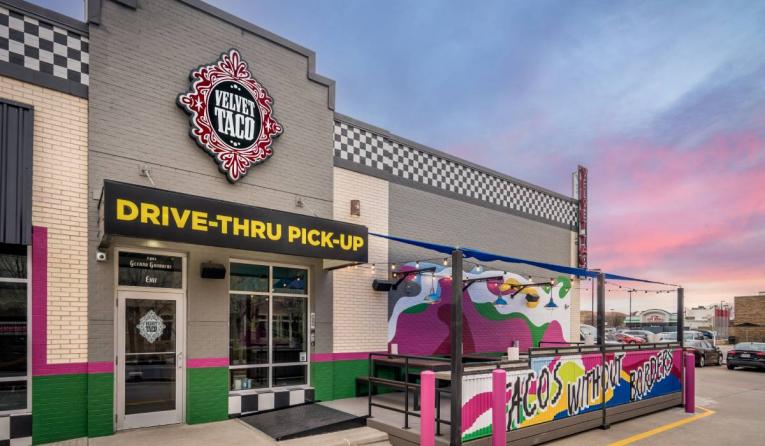 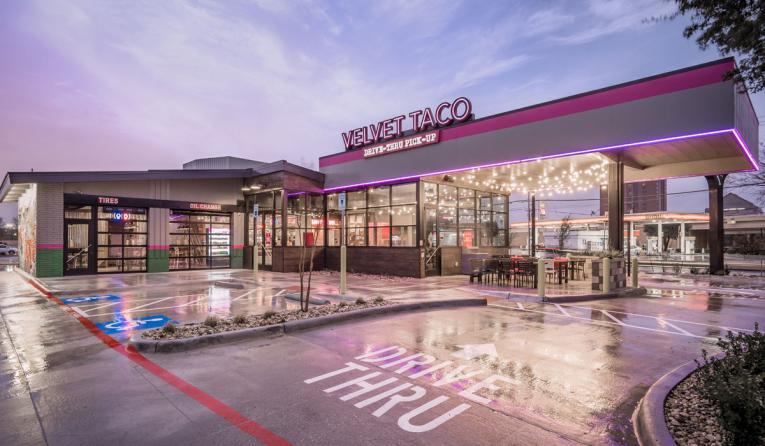 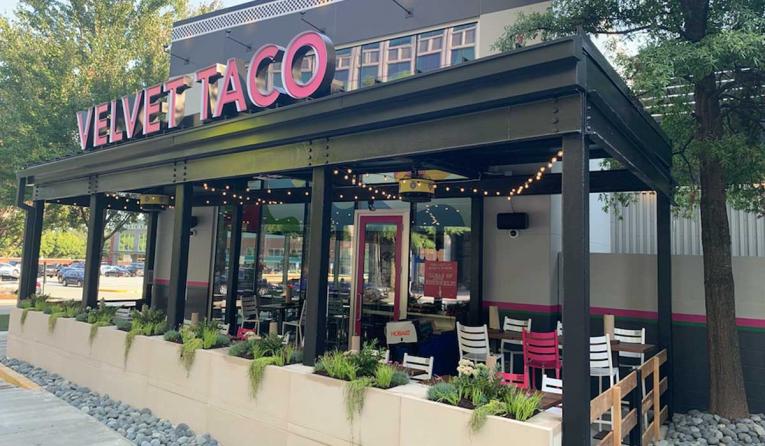 Velvet Taco boosted sales by reconfiguring kitchens into two separate production lines—one for delivery and takeout and one for dine-in. A change in the food preparation process has also cut average ticket times in half and raised sales by 15 percent. With the new production lines and QR codes placed on tables, the brand is making sure customers experience a frictionless and hassle-free ordering process.

So far, the brand's efforts are working. Off-premise sales mix more than 50 percent, compared to around 35 percent prior to COVID. In 2020, sales outside the four walls rose to 65 percent, including a 90 percent increase in off-premises orders. Digital mixed 23 percent before the pandemic, but rose to 42 percent last year, good for an 83 percent increase. Velvet Taco also added a catering channel that’s expected to add $10 million in incremental sales.

The chain has repeatedly invested in convenience, including pick-up windows, dedicated parking, drive-thrus, and a mobile app that remembers customers’ names and credit card information.

“There's a variety of ways in which tech has enabled us to become more efficient, more fluid,” Dover says. “I think that's a trend you'll continue to see. We're embracing that.”

“It's just a way of life now,” he continues. “Even though, knock on wood, life is beginning to return back to normal, I think that some of those habits are just going to stick and they're just going to continue to be part of your day to day in how you visit restaurants.”

In terms of what’s next, Velvet Taco will likely soon unveil a digital loyalty program and kiosk it’s testing in stores. It’s also focused on providing careers for employees, who they call “Tribe Members.” To Dover, the chain owes its success to the hard work and dedication of employees.

“There's nothing more important than that experience that you get in the restaurant, whether it's takeout or delivery or face-to-face,” Dover says. “We'll continue to focus on executing at the restaurant every day and opening one great restaurant at a time."