Sales Plummet as Much as 90 Percent at Shake Shack

The fast casual opening up its delivery network.

In many ways, Shake Shack surged to restaurant stardom by appealing to customers who felt they didn’t belong in the traditional fast-food box. Launched by fine-dining luminary Danny Meyer, the brand took a modernist approach, with physical settings that spoke to millennials and encouraged a fresh generation of counter-service diners. Things like wood tables recycled from old bowling-alley lanes. Digital signs. Local food purveyors spotlighted on menus. A social media personality that strayed from typical fast-food ads.

One result—an intended byproduct—is that Shake Shack transformed into a gathering spot in those early days. Almost like Starbucks’ “third-place” positioning in burger form. To this day, convenience remains a back-burner goal, at least compared to big-box peers. Food takes a bit longer out of the kitchen. People linger. Dining rooms are often packed, especially in East Coast spots where Shake Shack spread from its cult-driven base.

This reality is hitting especially hard during COVID-19, CEO Randy Garutti said Thursday in a business update. The fact New York City remains front line to the unprecedented crisis isn’t aiding the cause, either (85 percent of the brand's units are based outside the Big Apple, but the highest-volume units are found there).

Today, nine company-run Shake Shacks have temporarily closed entirely. The rest are relying solely on to-go and delivery orders, like the majority of still-open restaurants coast to coast.

Garutti said sales have been “severely impacted,” and the company is working to align operating costs to the best of its abilities. Over the last two weeks, as mandated shutdowns and stay-at home orders webbed across the country’s map, sales at Shake Shack took a dramatic plunge.

Compared to last year, excluding those shuttered restaurants, sales across its domestic corporate system are down between 50–90 percent, Garutti said. The average is 70 percent.

Also unlike many quick-service brands, Shake Shack is heavily corporate run. There are 275 units systemwide, with 163 of those representing U.S. company-operated locations (another 22 are domestic licensed stores, and 90 are international licensed venues).

“Shake Shack was born as a community gathering place in Madison Square Park in New York City,” Garutti said. “Around the globe, communities are being asked to temporarily do the exact opposite of the fundamental human need to gather with friends that we’ve built this company upon. While we expect to feel this impact for some time ahead, you can bet that when the day comes where friends, families, coworkers, travelers and everyone in our community chooses to gather again, Shake Shack will be the place they choose to do so.”

Same-store sales were down about 2 percent through the first two months of Q1, which follows a recent trend for Shake Shack. The chain’s comps declined 3.6 percent to close fiscal 2019, comprised of a 1.8 percent increase in price and 5.4 percent dip in traffic. Shake Shack credited the drag to a few factors. Namely, an ongoing transition to Grubhub as a sole delivery partner on a market-to-market basis (more on this later and how it’s not the case now). Exiting vendors—some with better awareness in certain areas—dragged results. The other factor was cannibalization stemming from a record development year where Shake Shack opened 39 domestic corporate stores—80 percent in existing markets. All 12 of the brand’s new company restaurants in Q4 were in DMAs where Shake Shack already operated.

Back to the present, Shake Shack said sales started to drop significantly in early March as the coronavirus fractured everyday life. The impact became more acute as the month progressed, resulting in March comps falling 29 percent compared to the year-ago period.

To the earlier point of design and site selection (Shake Shack is not a brand that appreciates 70 percent of its business via drive thru, like McDonald’s and Wendy’s), much of the chain’s footprint is heavily indexed toward high volume, urban, and premier shopping locations. So the dent, Shake Shack said, will continue to be sizable as long as stay-at-home orders remain in place.

From mid-March on, Shake Shacks that remained open were operating in a limited to-go or delivery model, with all dining rooms closed. Most units today don’t allow guests inside and have converted to curbside to-go service. Some have modified drive-up configurations to keep employees and guests safely distanced, the company added. 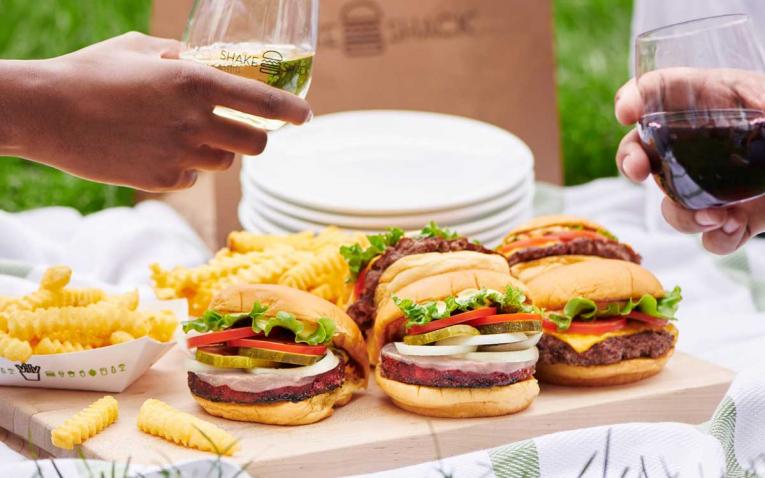 COVID-19 has hurt Shake Shack’s licensed business, too. Beginning in China in January and subsequently around the global, licensed partners witnessed dramatic drops in sales, the brand said. Stadium business is fully closed. And of the airport locations that have remained opened, they are currently seeing a “small fraction” of the travelers they welcomed just a few weeks ago before travel was curtailed.

Throughout the U.K. and Middle East, Shake Shacks are mostly closed or running on modified hours with delivery only. In Asia, restaurants shut the doors in the Philippines; sales have been “deeply impacted” in Japan, Korea, and Singapore.

One bright spot, Shake Shack said, is that business in Shanghai and Hong Kong has begun to see a slow, but steady rebound toward the end of March from low points earlier in Q1.

But at this time, just 70 of 120 total licensed Shake Shacks remain open.

Shake Shack, with immediate effect, also decided to expand its integrated delivery partners to now include Postmates, DoorDash, Caviar, and Uber Eats. All will be available over the next week or two. The brand moved to a non-exclusive agreement with Grubhub in response.

Shake Shack said its supply chain remains in good order. It drew down on its revolving credit facility of $50 million, March 24 to enhance financial flexibility. As of April 1, the company said it had $104 million in cash and marketable securities on hand, “providing adequate liquidity for the foreseeable future.”

Other measures in the works

Shake Shack said about 20 percent of its existing home office headcount has been furloughed or laid off. Furloughed employees are receiving ongoing pay through at least April 8 and have the option to keep or be paid out for earned PTO. During the time of the furlough, Shake Shack is also paying 100 percent of employers and employee medical premiums, through July 1. Salary reductions were taken across all executive and home office employees. A hiring freeze was implement company wide as well.

Shake Shack added its reviewing operating hours in addition to potential closings of operations where sales are not at levels sufficient to stay open. All new design and construction of future restaurants was suspended (with the exception of a handful of units close to completion). No new locations are expected to open at this time however.

Non-essential capital expenditures were suspended and the board of directors’ cash compensation was deferred. The brand noted the stimulus bill might benefit employees and overall operations, but it didn’t provide further details.

In terms of precautionary measures, Shake Shack is fully paying any employee diagnosed with COVID-19 for two weeks while they are out of work. And they are eligible to continue to receive pay through the company’s short-term disability plan, which is available to all employees.

Shake Shack offers free access to a 24-hour emotional support helpline and is trying to drive awareness to its HUG Fund, which is an option employees can pay in to and help each other in times of need.

Shake Shack recently launched cook-at-home ShackBurger Meal kits in collaboration with online marketplace Goldbelly. The ready-to-cook boxes are shipped with all the staples needed to recreate a classic ShackBurger at home. They’re available for shopping nationwide.