The Chicken Sandwich Wars Will Ignite Again in 2021

Roughly 65 percent of the U.S. population ordered a breaded chicken sandwich from a quick-service restaurant in the last six months.

Perhaps due to a frantic news cycle, around restaurants and across the country in general, it appears we’ve reached a lull in the chicken sandwich wars. But don’t expect that to last.

The reason brands jumped into the fray in the fall and winter of 2019 and over the duration of 2020, isn’t complicated. Ever since Popeyes’ August 2019 launch, quick-serves fixated on replicating its viral success.

Data platform Sense360, measuring spend per panelist (year-over-year relative change), offered some meat behind the why.

McDonald’s (partially coincided with Travis Scott promo in this case)

So while some great results, replicating Popeyes’ trigger event is a unicorn target. Understandably so. As much as the brand has, impressively, continued heightened results—to the tune of $400,000 more per restaurant—even it understands this was going to dim as the category crowded.

Yet that doesn’t mean there isn’t plenty of runway to chase.

This graph below explains the base point. 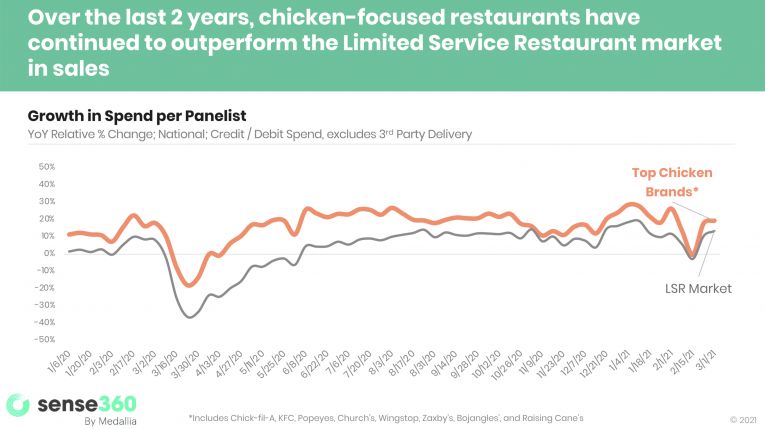 Of the limited-service chains tracked by Sense360, four out of the top 10 fastest-growing (in terms of year-over-year panel spend) are chicken focused.

The Top 10 (based on year-over-year spend growth)

Growth in spend per panelist, according to Sense360 data (relative percentage change versus 2019 equivalent weeks)

One thing to note as well, late February/early March launches likely received a stimulus bump, in addition to an overall improving market for restaurants.

However, with that said, here’s a look at McDonald’s. The wave continues to rise. 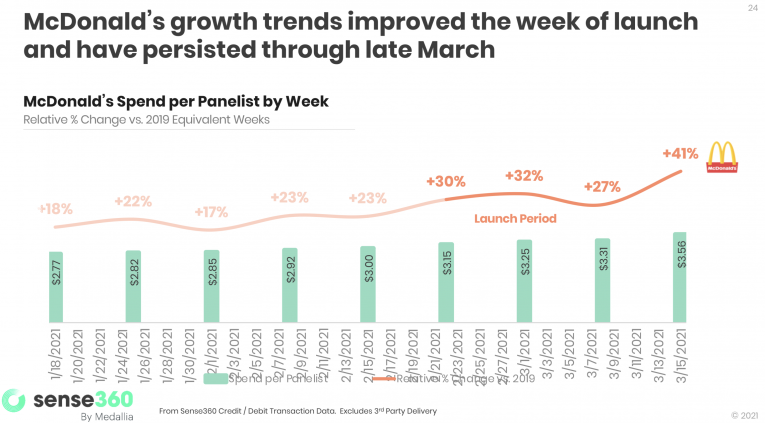 Below is a breakdown of the demographics fueling McDonald’s growth. 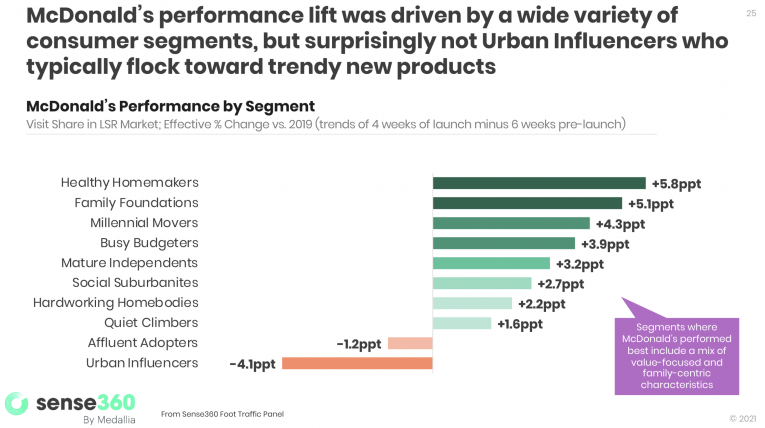 And another way to look at it: 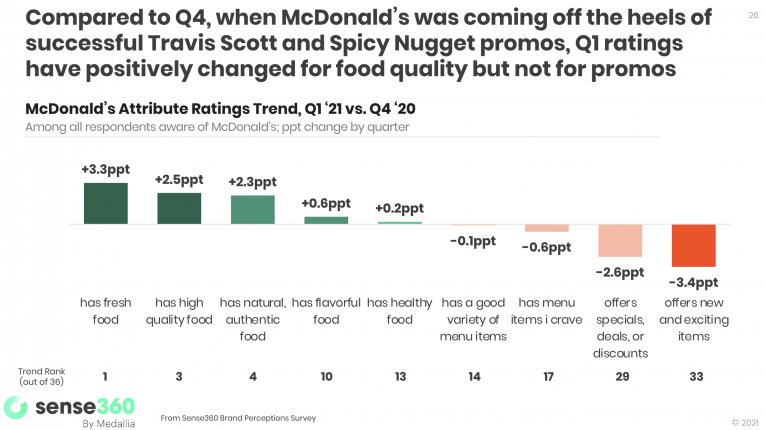 Analytics platform Placer.ai examined the fast-food giant’s results, too. It found McDonald’s launch date of its chicken sandwiches drove traffic up 19.1 percent, while the days that followed rose 29.1 and 21.5 percent, respectively. Saturday traffic witnessed a week-over-week bump of 12.4 percent, and Sunday saw a 13.8 percent increase.

The impact was even felt when observing year-over-year numbers, with the week of launch seeing visits down 29.4 percent—the brand’s best mark for in-store visits since September. And it came on the heels of an 18.3 percent week-over-week increase in visits.

During the week of February 22, visitor counts were down 29.4 percent, year-over-year, for McDonald’s. But that’s an improvement from being down north of 43.1 percent the week of January 25.

The launch was so significant, Placer.ai said, it “fundamentally changed the trajectory for McDonald’s.” Average daily visitors in February hiked 12.9 percent compared to January, and overall monthly visits in February rose 2 percent month-over-month despite the fact February has less overall days. All of this without taking into account McDonald’s delivery strength.

Chicken’s prominence has been building. In 2018, 65.2 pounds of chicken per person were available for Americans to eat (on a boneless, edible basis), compared to 54.6 pounds of beef. According to the USDA. Chicken began its upward climb in the 1940s, overtaking pork in 1996 as the second most consumed meat. Since 1970, U.S. chicken availability per person has more than doubled. In 2018, 16.1 pounds of fish and shellfish per person were available for consumption.

One staggering figure to latch onto: Roughly 65 percent of the U.S. population ordered a breaded chicken sandwich from a quick-service restaurant in the last six months.

And if that isn’t something to hunt as a menu innovator or marketer, what is?

“No matter which chicken sandwich wins the chicken sandwich war or which sandwich is competing with the burger, operators who put chicken sandwiches or burgers or both on their menus are headed in the right direction,” David Portalatin, NPD Food Industry Advisor and author of Eating Patterns in America, said in a statement.